A shop assistant has been stood down after video of him confronting a woman allegedly using an empty child’s pram to steal from his store went viral.

Video shows the worker stopping the woman outside Supercheap Auto in Ashmore, on the Gold Coast, after she allegedly tried to flee with items stashed in the pram.

After an expletive-ridden showdown, the employee managed to recover some of the alleged goods the woman nabbed.

The alleged thief then fled.

Supercheap said the worker was stood down pending an investigation.

‘While the situation is being investigated, the employee will not be able to work,’ the company told Radio 2GB.

The move sparked outrage online with Australians expressing their support for the worker.

‘Was he really sacked that’s’ a s**t go Supercheap!’ one wrote on Reddit.

‘Unbelievable. This guy stood up for this store and this is how they repay him. Bloody thieves need to learn that stealing just isn’t cool,’ another comment read.

A third added: ‘Poor bastard. You do a good deed and get punished. What a f**king joke.’

However, others felt the employee handled the situation poorly.

‘I was in retail work 30 years ago and they were adamant even back then that you report but never confront if you suspected a thief,’ one wrote.

‘I was a retail manager for years. I always trained my staff to never stop a thief,’ another added.

‘There was no incentive from head office to stop thieves and they didn’t want to risk an employee getting hurt or a thief trying to sue.’ 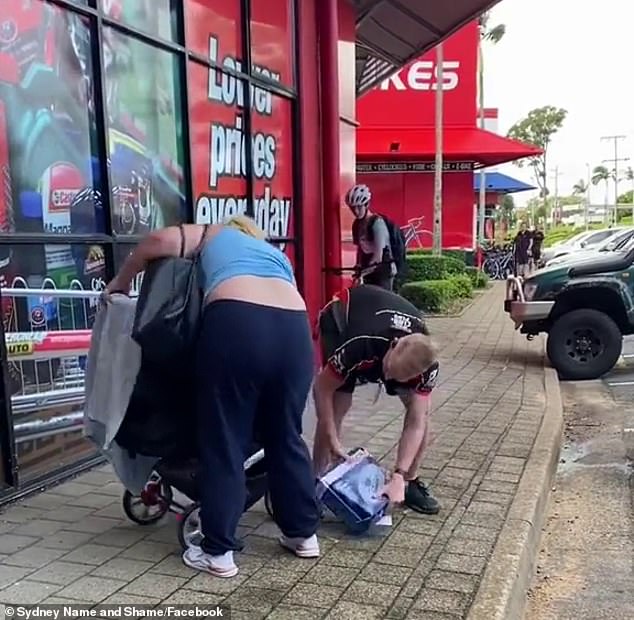 ‘It’s idiotic to risk your own safety over product that costs a few cents/dollars to make, and is insured by the company. You’re worth more than cheaply made s*** that is easily replaced,’ a third wrote.

A Supercheap spokesperson told Daily Mail Australia the company is reviewing the incident, which is ‘standard practice after an event of this nature’.

‘At all times, we remain focused on the health, safety and wellbeing of our team members and customers,’ they said.

It is understood the employee was stood down with pay.

The video posted online last month showed the woman tightly gripping her decoy pram, pretending there was a baby inside, as she bickered with the employee.

The employee threatened to ‘call the cops’ if she didn’t return the allegedly stolen items as the woman tried to move the stroller out of his reach.

‘Let my baby go,’ she screamed as the man took hold of its handles and looked inside.

‘You haven’t even got a baby in there,’ the man calmly replied.

‘Don’t touch my baby,’ the woman screamed again as the employee noticed a box stowed inside the pram that was covered with a blanket.

‘Oh there’s a box in there!’ the man cries in mock surprise.

The woman then seemingly gave up on her ploy and told the retail worker he could have ‘the f**king motor’.

She pushed a large cardboard box out of the pram and onto the pavement for the man to collect before finally calling him a ‘f**khead’.

A second video later posted online showed the woman barging him out of the way and storming off down the carpark, away from the automotive supplies store.

Queensland Police said detectives were unaware of any complaints made about the incident.

A witness, who was at the shop getting her windscreen wipers serviced, said staff allegedly saw her stealing on their cameras inside the store. 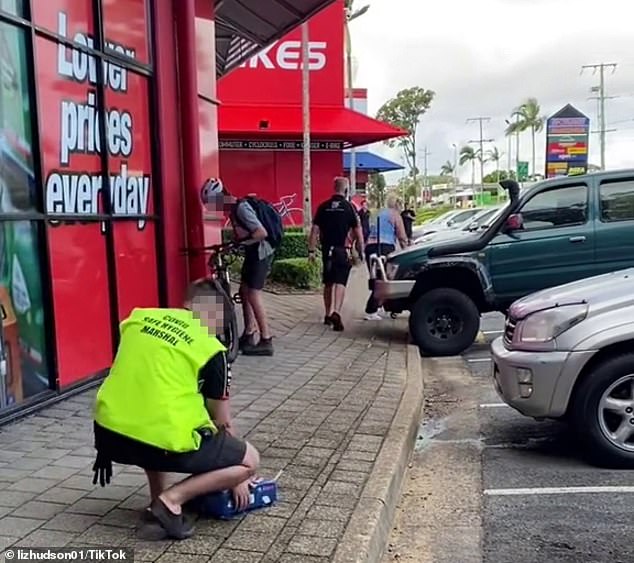 The witness claimed to Daily Mail Australia that the woman had three disc brake rotors, valued at about $82.99 each.

‘I heard the yelling before I saw them and just started filming,’ the witness said.

‘The worker was ok, he was angry more than anything.’

The bystander claimed staff recovered two rotors and believe the woman got away with a third hidden under the pram.