‘Super tomatoes’ that have been genetically engineered to produce more vitamin D could help reduce deficiency of the vitamin around the world.

They say editing this gene allows the tomato to keep more of the provitamin, which can be converted to vitamin D through UV exposure or sunlight.

The researchers from the John Innes Centre in Norwich claim the vitamin D you can get from eating one of these genetically modified tomatoes is equivalent to two eggs or 28 grams of tuna.

They could therefore help satisfy child and adult daily requirements for vitamin D3, reducing the risk of developing diseases such as cancer, Parkinson’s disease and dementia.

What is vitamin D and how do I get it?

Vitamin D is a type of vitamin that the human body gets from both diet and produces when exposed to sunlight.

What does it do?

It helps regulate the amount of calcium and phosphate in the body.

These nutrients are needed to keep bones, teeth and muscles healthy.

People who don’t get enough vitamin D can suffer from bone deformities such as rickets in children and osteomalacia (a softening of the bones) in adults.

How do I get enough vitamin D?

In the UK most people will get the vitamin D they need from sunlight between April and September as long as they go outside.

The body naturally produces vitamin D when exposed to sunlight.

Vitamin D is also found in foods such as oily fish, liver and egg yolks.

Do I need to take a supplement?

The NHS says people should consider taking a vitamin D supplement in the winter month when sunlight is weaker.

Other people may need to take vitamin D throughout the year due to being housebound, or if they have dark skin which reduces the amount of sunlight their skin absorbs.

Children aged one-to-four years old should also be given a daily vitamin D supplement of 10micrograms(μg) of throughout the year.

How much should I take?

The NHS advises 10μg a day is enough for most people.

What happens if I take too much?

Taking too much over a long time can lead to a dangerous build-up of calcium in the body which can weaken bones, and also damage the heart and kidneys.

The NHS advises against adults taking more than 100μg per day.

Children aged one-to-10 years should not exceed 50μg a day and infants under 12 months should not have more than 25mμg per day.

Vitamin D is frequently sold in units called IU. One microgram of vitamin D is equal to 40 IU.

In the UK, most people will get the vitamin D they need from sunlight between April and September as long as they go outside.

This is because the body naturally produces vitamin D when exposed to sunlight.

However, during the winter months, we are more reliant on getting our vitamin D from foods such as oily fish, red meat, liver and egg yolks – though few foods contain enough vitamin D to reach the recommended daily intake.

As a result, one-in-six Brits have low levels of the ‘sunshine nutrient’ in their blood – increasing their risk of a host of illnesses.

‘These tomatoes could represent a new dietary source – with potential public health implications,’ the researchers said in a press release.

Vitamin D helps regulate the amount of calcium and phosphate in the body, which are needed to keep bones, teeth and muscles healthy.

A lack of vitamin D can lead to bone deformities such as rickets in children, and bone pain caused by a condition called osteomalacia in adults.

The essential nutrient has also been associated with improvements in mood, immunity, sleep and a wide range of other health-related issues.

‘Deficiencies in vitamin D impact immune function and inflammation and are associated with increased risk of cancer, Parkinson’s disease, depression, neuro-cognitive decline, dementia and the severity of Covid,’ the study states.

‘Most foods contain little vitamin D and plants are very poor sources. We have engineered the accumulation in tomato by genome editing to provide a biofortified food.’

The researchers claim the technique could be adapted for use in a host of other crops – such as potatoes, peppers and chillies.

Prof Dominique Van Der Straeten, of Ghent University, Belgium, who was not involved in the study, described it as a ‘leap forward’.

‘Biotechnological interventions can reduce dependence on animal-derived foods by increasing the nutritional value of crop products – making them valuable alternatives,’ she said.

‘Establishing global food security while limiting erosion of the Earth’s buffering capacity against the threat of collapse under the burden of global climate change is essential.

‘In this context, there is growing awareness of the need for a complete food systems transition, given that healthy diet is a necessity for humans as much as for the survival of the delicate ecosystem equilibria on the planet. 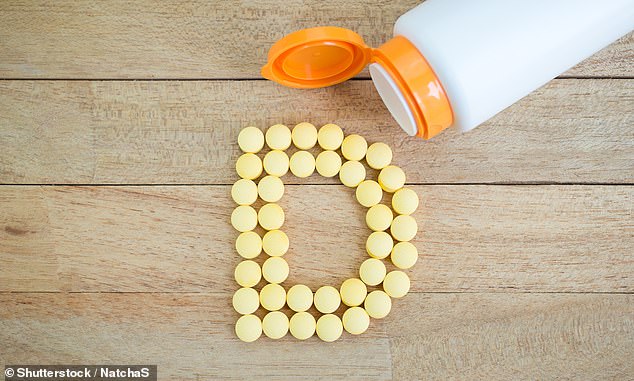 Government advice is that everyone should consider taking a daily vitamin D supplement during the autumn and winter.

Prof Guy Poppy, Professor of Ecology at the University of Southampton, who was also not involved in the study, said the breakthrough was especially important for people eating more plant-based diets – as most Vitamin D is found in meat and dairy foods.

‘Gene-editing tomatoes to accumulate provitamin D3 at levels above recommended dietary guidelines could result in better health for many especially as tomatoes are a widely accessible and readily eaten food,’ he said.

‘This exciting discovery not only improves human health but contributes to the environmental benefits associated with more plant-based diets – often linked with a challenge in securing some key vitamins and minerals widely found and bioavailable in animal products.’

The study has been published in Nature Plants.

Crispr-Cas9 is a tool for making precise edits in DNA, discovered in bacteria.

The technique involves a DNA cutting enzyme and a small tag which tells the enzyme where to cut.

The CRISPR/Cas9 technique uses tags which identify the location of the mutation, and an enzyme, which acts as tiny scissors, to cut DNA in a precise place, allowing small portions of a gene to be removed

By editing this tag, scientists are able to target the enzyme to specific regions of DNA and make precise cuts, wherever they like.

It has been used to ‘silence’ genes – effectively switching them off.

When cellular machinery repairs the DNA break, it removes a small snip of DNA.

In this way, researchers can precisely turn off specific genes in the genome.

The approach has been used previously to edit the HBB gene responsible for a condition called β-thalassaemia.