The ancient silver coin showed the face of Edward the Martyr who ruled Saxon Britain in the 10th Century, aged 13, before he was assassinated three years later.

It was found by a metal detectorist in a field on the Isle of Wight and has sold for £4,000 more than its maximum estimated pre-auction value.

Part of the proceeds will be donated to NHS Charities Together which works with more than 250 UK organisations.

A rare coin from the short reign of the boy king Edward the Martyr 1,000 years ago

Experts said the coin was exceptionally rare and appeared ‘almost as struck’ by the Saxons when it was unearthed in March 2018.

King Edward the Martyr, crowned in 975, is depicted as a very young king wearing a royal band known as a diadem that signified he was monarch.

It was minted in Canterbury in Kent where the teen prince had the support of the church for his claim to the throne when his father King Edgar the Peaceful died.

The Saxon penny sold for £11,160 in an online live auction at Dix Noonan Webb which specialises in international coins, medals, banknotes and jewellery.

Nigel Mills, antiquities expert at the auctioneers, said: ‘The price realised for the Edward the Martyr penny exceeded our expectations.

‘It reflects the quality and rarity of the coin combined with the fact that it is a new discovery and it is the first time that it has been offered for sale.’

The penny was discovered on a ploughed field by a 68-year-old retired council worker using a Minelab E-Trac metal detector. 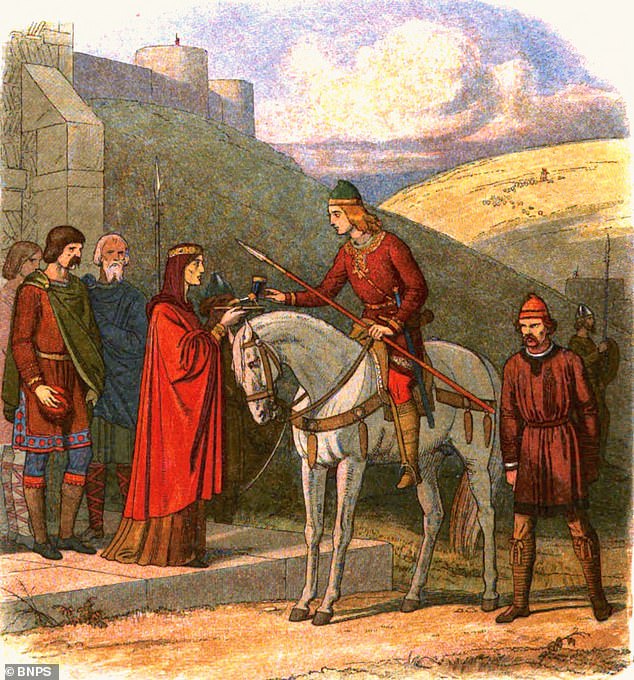 A 19th century painting by James William Edmund Doyle.  Edward the Martyr is offered a cup of mead by Elfthryth, widow of the late Edgar just before Elfthryth’s attendant murders him

Frustrated at only finding three 22 lead bullets on one spot and ready to give up for the day, the metal detectorist, who wished to remain anonymous, then got another signal and dug down four to five inches to uncover the Saxon penny.

On one side of the silver penny are the words ‘EDPEARD REX ANGLORX’ which translates as ‘Edward king of the English.

On the reverse is a small cross in the centre with the words ‘AELSTAN M’O CANT’ – Aelfstan moneyer of Canterbury – written around the edge.

There were 39 mints operating around the country at the time with three moneyers working at Canterbury. 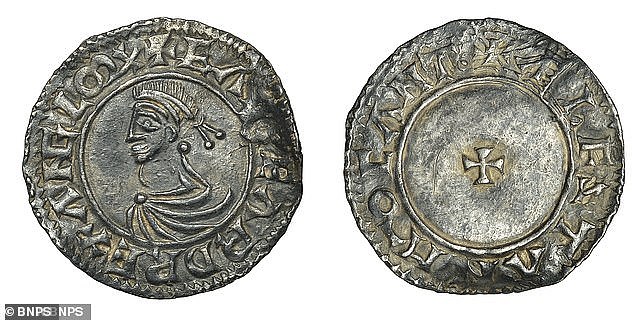 King Edward rose to the throne aged just 13 and was murdered three years later, some say on the orders of his half-brother who succeeded him aged ten and became known as Ethelred the Unready.

Nigel said: ‘Because Edward was the eldest by a few years, he took to the throne and was crowned king. But there were a lot of disputes going on between the family regarding who was or should be king.

‘Edward had gone to see his half brother at Corfe Castle where he was murdered. They dragged him off his horse and stabbed him.

‘He was apparently then taken away on the horse and dragged for some distance.’

The online auction comprised 692 lots and saw only four unsold.

Another notable highlight was an Australian coin which was one of the first coins to have been made for circulation in the new colony of New South Wales in 1813.

Otherwise known as a Dump, the coin was from the Collection of British Colonial Coins formed by the late John Roberts-Lewis.

Valued at Fifteen Pence and comprising a circular centre segment from the Five Shilling Holey Dollar, it had been estimated to fetch £2,000-£3,000.

But after significant interest, it was snapped up by an Australian collector fetching a substantial £6,820.

‘The piece is from an old collection of British Colonial coins that DNW are offering, the previous owner bought it 58 years ago for £4.

‘Most were used until they wore out and were melted down for silver in late Victorian times.’