Britons were on high alert for sunburn today with the absence of aircraft in the skies set to give the country its highest levels of ultraviolet radiation on what will be the second consecutive hottest day of the year.

The Met Office said UV rays, which can increase the risk of skin cancer, could reach nine in Devon and Cornwall today, which is ‘about as high as it gets really in the UK’ and are more commonly seen in the Mediterranean.

Temperatures could hit 93F (34C) in Wales and London today with thousands of sun-seekers expecting to pack parks and coastlines again, after the mercury got up to 90.7F (32.6C) in the capital yesterday. Some people were so eager to get a good spot in Bournemouth this morning that they camped overnight on the beach.

More public toilets are also now opening, with up to 3,000 now available for use according to the Lockdown Loo website, including 15 in Brighton and Hove, seven in Bournemouth, six in Eastbourne and six in Blackpool.

But the good weather is due to change tonight as thunderstorms form across the west of the UK, with up to 1.6 inches of rain set to fall in two hours from 4pm along with lightning, hail, strong winds and possible power cuts.

Met Office meteorologist Alex Burkill said: ‘The sun is as strong as it gets at the moment because we’re so close to the solstice. We’ve got peak sun strength, clear skies, plenty of sunshine – it’s the perfect ingredients for high UV.’ 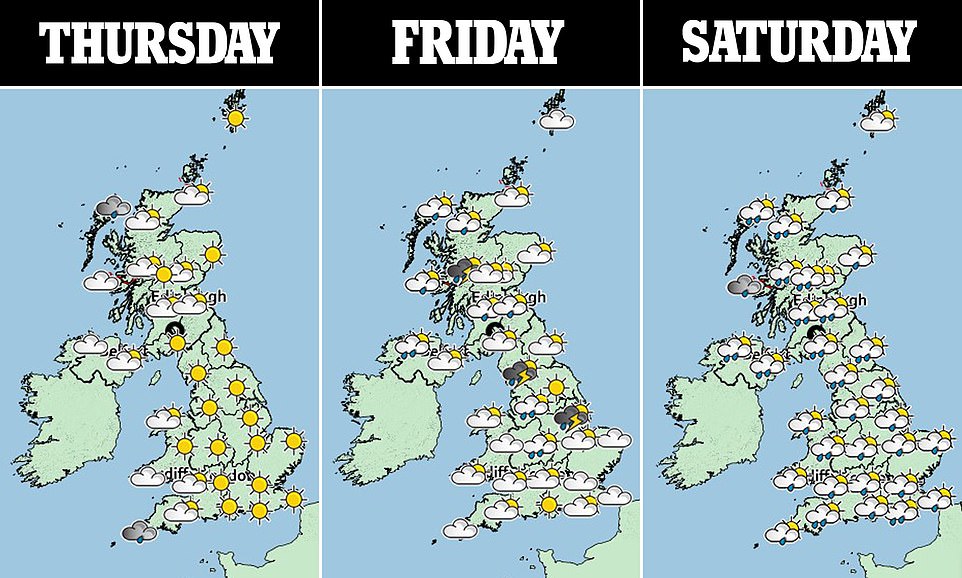 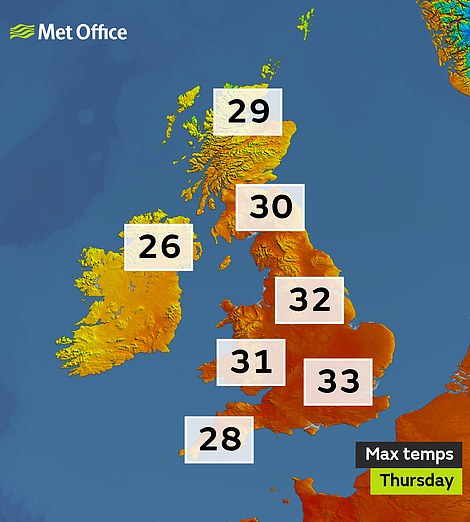 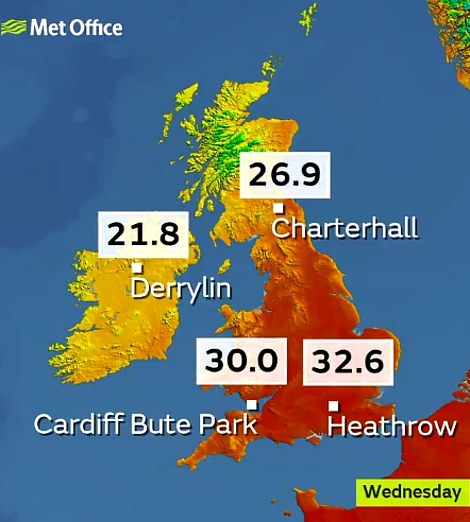 Among the main reasons for high UV levels given by experts are a hole in the ozone layer that opened earlier this year, and the time of year so near the solstice combined with limited cloud cover and water vapour.

But Michaela Hegglin, a professor in atmospheric chemistry at the University of Reading, added that it was also down to a lack of plane contrails, which normally create clouds reflecting UV rays away from the ground.

But the expert told the Daily Telegraph that the negative impacts of UV levels were massively outweighed weighed by the positive impacts of lower levels of air pollution and greenhouse gas emissions during the coronavirus crisis.

She said today could see some of the ‘highest UV levels ever recorded’ in Britain, adding: ‘This is because of a combination of factors. We are at the summer solstice, when the sun is almost directly overhead at 1pm.

‘UV levels this high are rare in the UK, so people with light skin should be very careful to avoid getting burnt. While UV is important for getting vitamin D and keeping us healthy, too much of it can cause skin cancer or cataracts.’ 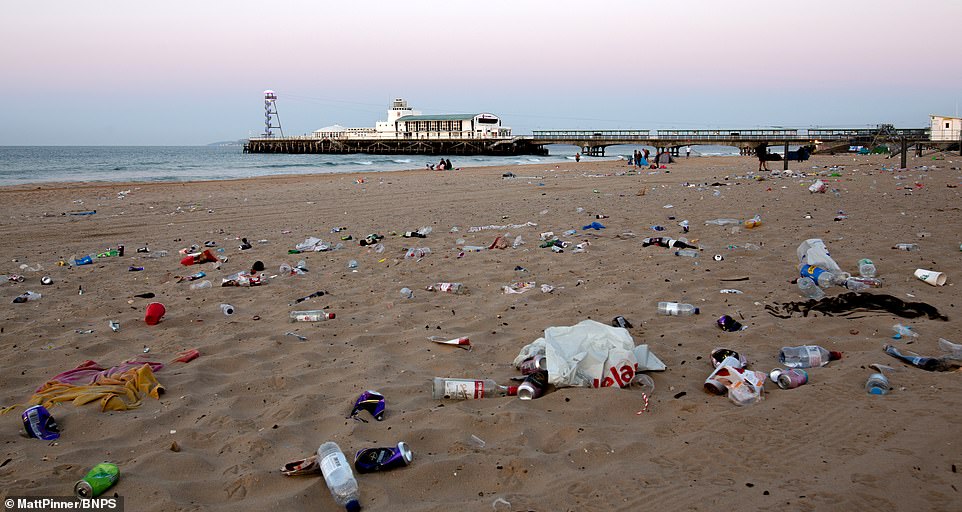 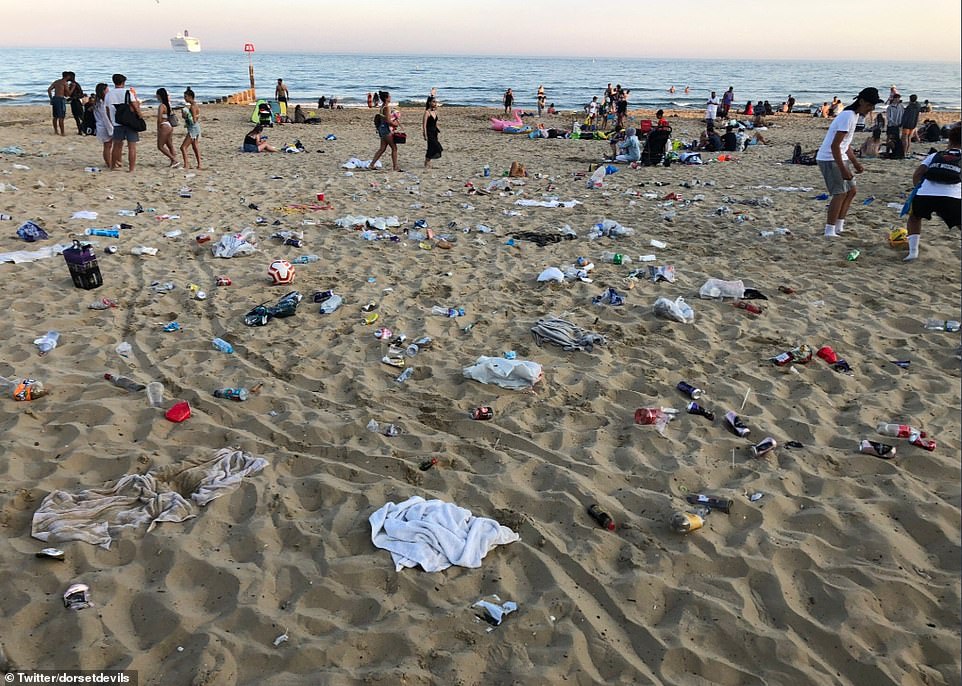 Officials in Bournemouth blamed a ‘breakdown in decent, civic behaviour’ for the appalling mass of rubbish left behind 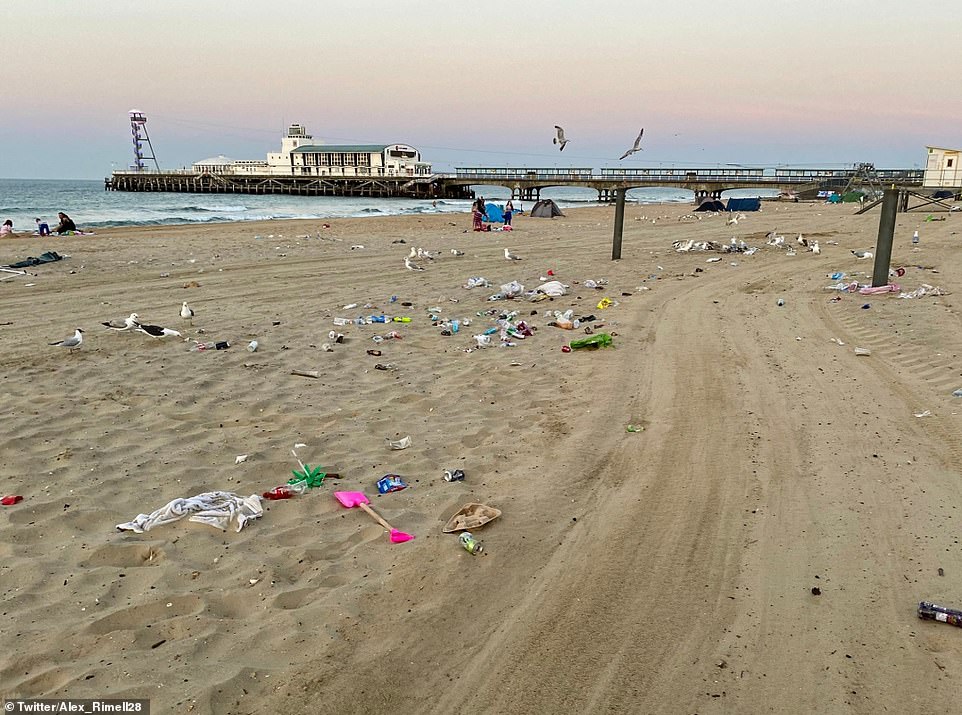 Shocking pictures were taken at 4.30am today before the council’s cleaning team arrived to clear the mess in Bournemouth 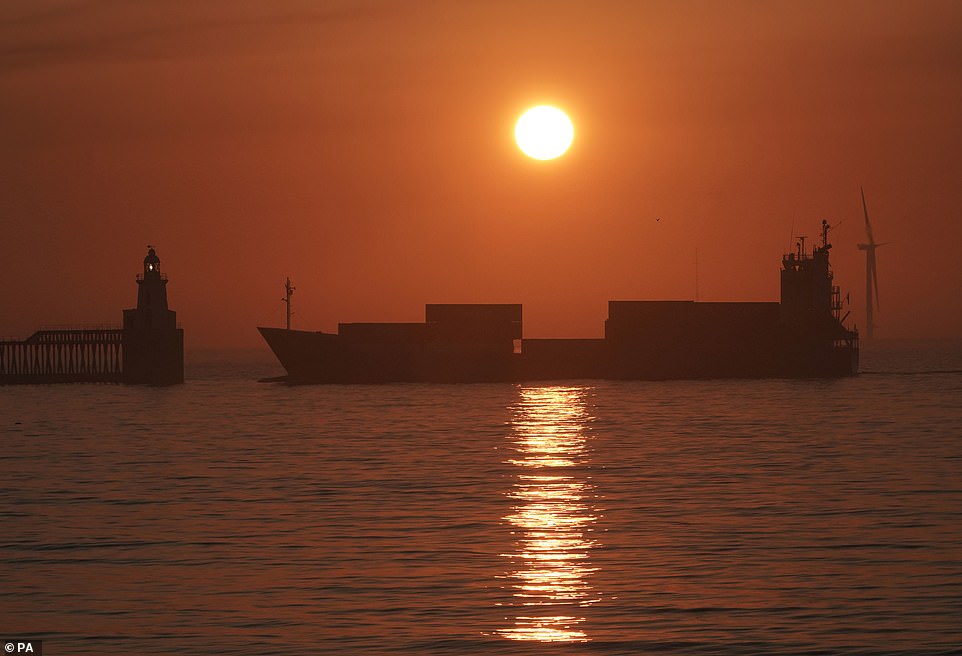 Temperatures reached their peak yesterday at London’s Heathrow Airport at 2.46pm, making it the hottest day of the year so far, beating the previous record on May 29 when Dawyck in the Scottish Borders got up to 84F (28.9C).

Police broke up a huge Brighton seafront party last night and sent hundreds of youngsters home after scuffles broke out.

Ten police vehicles were called to Hove Lawns, West Sussex at 8.40pm yesterday amid reports of ‘pockets’ of violence in the gathering.

The youths chanted at the officers, with one eyewitness calling it ‘like a stand-off between hundreds of youths and police’.

Locals believe the youngsters ‘would have finished GCSEs and (had) their end-of-year prom’. One resident called the situation ‘pure mayhem’.  Officers issued a dispersal order for the green near Grand Avenue.

Councillor Chris Henry said: ‘Let’s not leave our young people behind in the Covid recovery plans. 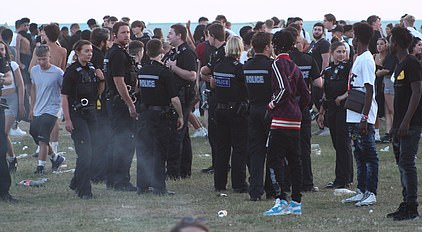 ‘It’s understandable that they’re bored and missing their friends, so we need to ensure their safety and develop activities for young adults so that police and the local community can focus on real crime and staying safe from Covid.

‘Hove Lawns tonight shows how badly solutions for young people are needed and how youth services are needed more than ever.’

Met Office meteorologist John Griffiths said there was a ‘low chance’ that the Welsh Marches – the area along the Welsh border – could see temperatures of 34C (93.2F) ‘very locally’.

The public has been reminded to take care around water throughout the summer, amid concerns people might be tempted to take a dip to cool down.

It comes as Thames Valley Police said yesterday evening that they had found a body following a search for a missing man at Lulle Brooke in Cookham, Berkshire.

The man, who was in his 30s, was understood to have got into difficulty in the water on Tuesday evening.

Thunderstorms are forecast to form in the south west and south east of England, Wales, western Scotland and Northern Ireland from 4pm today.

The Met Office has issued a yellow weather alert for those areas until 9am tomorrow, warning of disruption due to flooding, lightning strikes, hail and wind.

The storms are expected to continue from midday on Friday through to 6am on Saturday, with another yellow warning in place for the whole of the UK.

Areas hit by the storms could experience ‘torrential downpours’ with up to 2in (50mm) of rain falling in an hour.

The Met Office raised its heat alert level to three, as health authorities encouraged those most vulnerable – many of whom have been shielding during lockdown – to protect themselves amid the ‘exceptionally hot weather forecast this week’.

Public Health England (PHE) said older people, those with underlying health conditions, and very young children were all more at risk from the higher temperatures.

The amber level three, which remains in place for the West and East Midlands, requires social and healthcare services to target specific actions at high-risk groups, according to the Met Office website.

People have been advised to keep cool and stay hydrated where possible.

The Met Office said UV levels were expected to remain at eight across many parts of the UK today.

Emer O’Connell, consultant in public health at PHE, said it was important that people kept checking on the vulnerable, as many continued to spend more time at home due to coronavirus.

‘You will need to do things differently this year, for example keeping in touch by phone,’ she said.

Shoppers have also been advised to be aware they could be forced to spend extra time in the sun as a result of social distancing measures.

And dog owners have been urged to avoid exercising their pets during the hottest part of the day.

Vets Now, a provider of emergency veterinary care, warned that the average survival rate of a dog diagnosed with heatstroke was 50 per cent.

The RSPCA said it had received 330 calls in regard to animal welfare and the hot weather since March 23, adding it was expecting ‘hundreds more’ as temperatures increase this week. 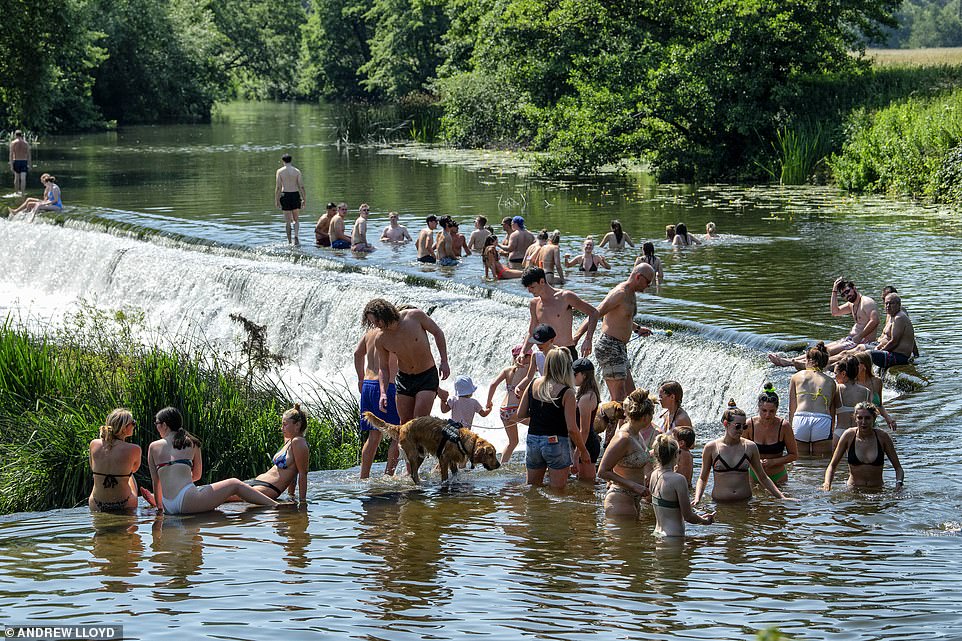 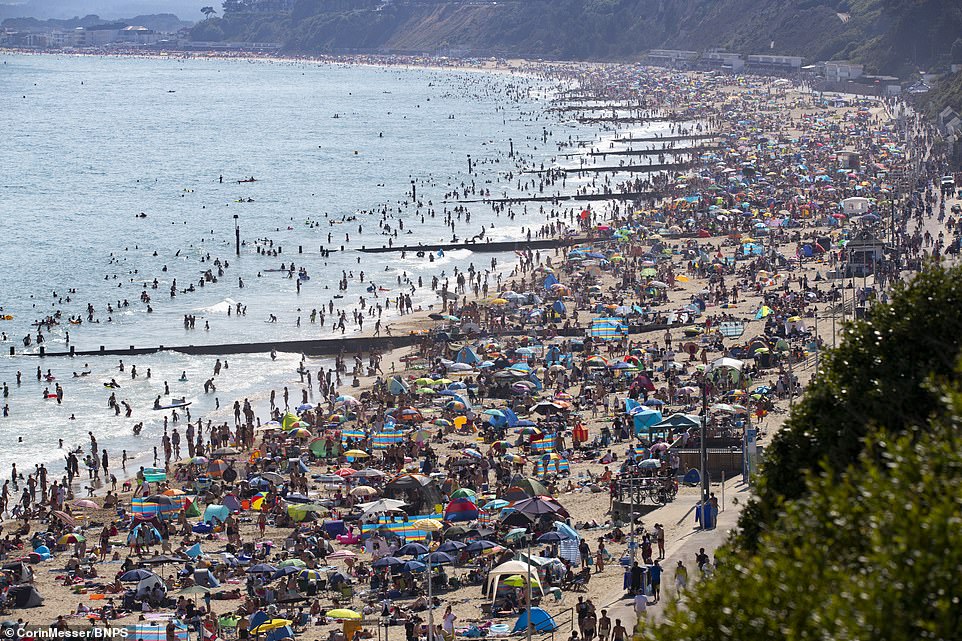 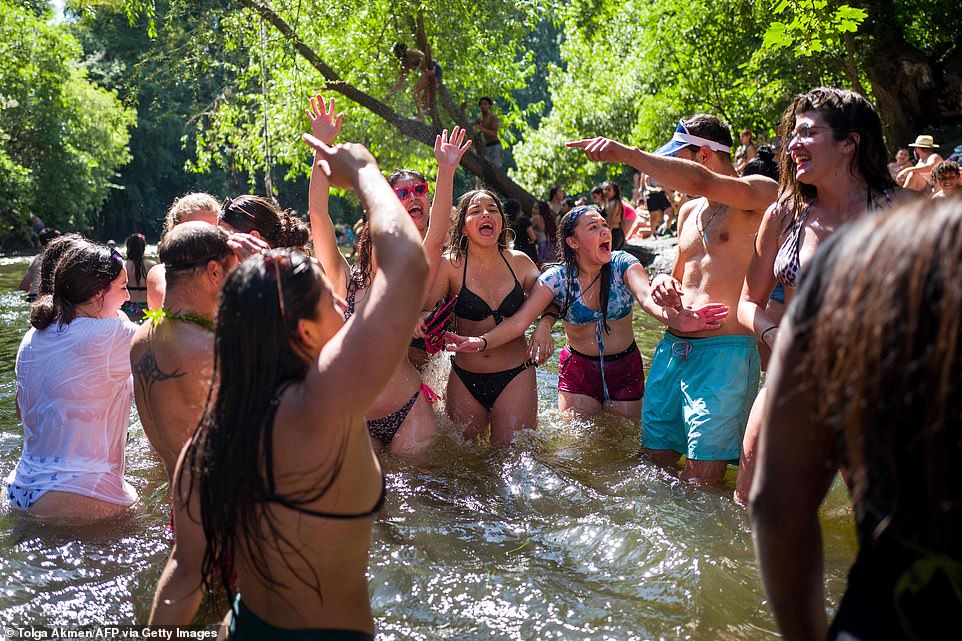 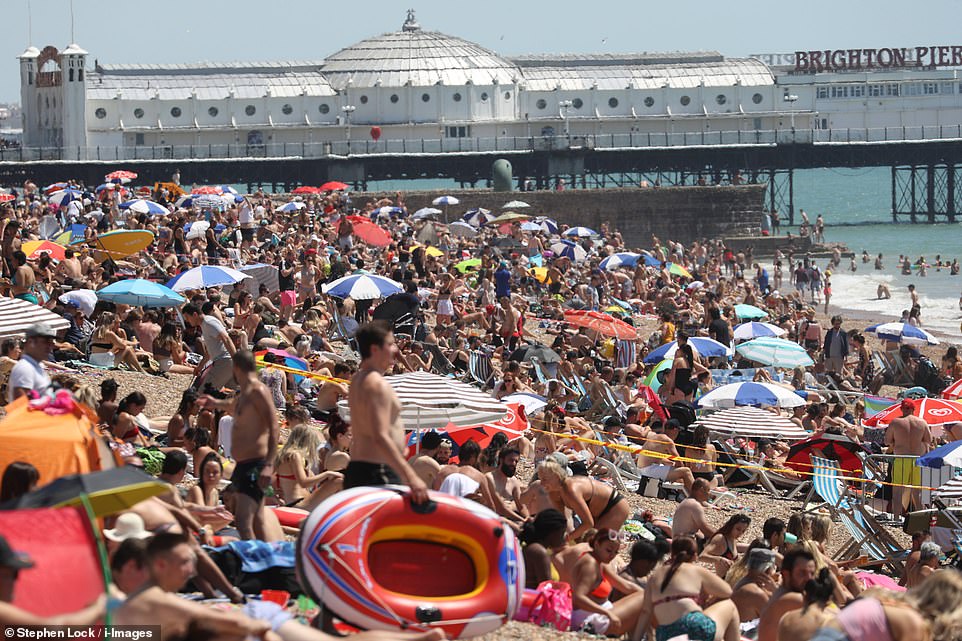 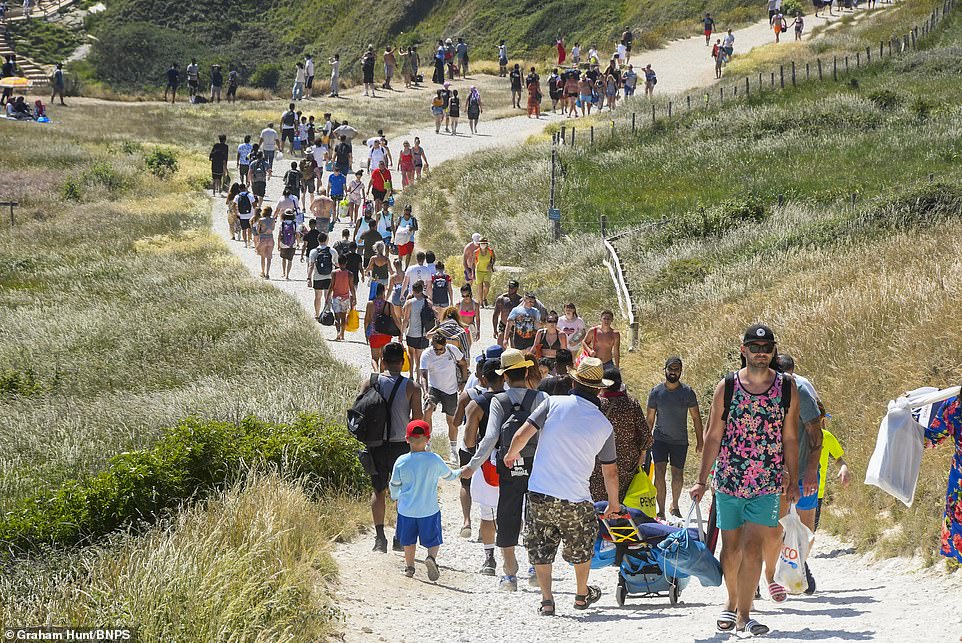 London Fire Brigade has warned people not to have barbecues on dry grass, not to drop cigarettes or matches, and not to leave rubbish such as glass bottles lying around amid a risk they could start fires.

Boy, 10, dies after getting into difficulty in Scottish loch amid frantic search by emergency services

A boy has died after getting into difficulty in a Scottish loch amid a frantic search by emergency services.

The ten-year-old passed away at Loch Lubnaig near Callander in Stirlingshire yesterday. The child was reported as having ‘difficulty in the water’ at 5.35pm after he reportedly fell into a river near the loch.

A four-hour rescue operation involving a helicopter was launched. Police said the incident was not suspicious.

A spokesman said: ‘A ten-year-old boy has died following an incident in Loch Lubnaig, near Callander, on June 24.

‘Emergency services were called around 5:35pm to reports of a child experiencing difficulty in the water. Sadly, the boy died. There are no suspicious circumstances and a report will be submitted to the Procurator Fiscal.’

Meanwhile stunned officials in Bournemouth today slammed ‘vile idiots’ who left 12 tonnes of litter strewn across the resort’s beaches following the hottest day of the year.

They blamed a ‘breakdown in decent, civic behaviour’ for the appalling mass of rubbish left behind by over 100,000 visitors – and volunteer litter pickers found many of the public bins were still half empty.

Shocking pictures taken at 4.30am this morning before the local council’s beach cleaning team arrived to clear the mess have sparked fury on social media.

Vikki Slade, the leader of Bournemouth Christchurch and Poole Council, said: ‘It doesn’t matter what we do, these vile idiots will ignore the rules. The disgusting mess left on our beaches makes me want to weep.

‘People urinating within sight of loos, parking illegally and just accepting the fine and ignoring the message of don’t come to Dorset is a breakdown of civic behaviour.’

One of the litter pickers on the beach was Peter Ryan, 61, who founded the community group Dorset Devils.

He said: ‘It is sad, disappointing and disgusting to see the beach in such a state. It is the jewel in the crown of the area and it does not deserve to be treated like this.

‘There were so many empty beer bottles, vodka bottles and cans of all varieties left on the sand, even though some of the bins on the pier were half empty. They’ve shown no care whatsoever for this beautiful environment.’