Sunrise host David Koch has unleashed on the Reserve Bank of Australia after its governor Philip Lowe repeatedly promised last year to leave rates on hold until 2024.

‘Late last year, November December, the Reserve Bank, Philip Lowe, was telling Aussies to go out and borrow, go out and borrow as much as you like, on the understanding. I’m not going to put up official interest rates ’til 2024,’ Koch said.

‘A couple of months later, they started putting up rates.

‘Was that advice to average Australians negligent?

‘Were they derelict in their duty to lead average Australians up the garden path to get themselves in debt?’

‘I wouldn’t describe it that way, Kochie,’ he told Sunrise.

‘Governor Phil Lowe has talked about that at some length about that guidance that he gave and how he considers the economic conditions to have changed faster than the bank anticipated.’

Banking giant ANZ is now predicting the RBA will raise rates by 0.5 of a percentage point in August, September, October and November.

Australian borrowers in May, June and July have copped 1.25 percentage points of rate rises – the steepest increases since 1994.

The case against Philip Lowe

The Reserve Bank governor last year repeatedly promised to keep the cash rate on hold at a record-low of 0.1 per cent until 2024 ‘at the earliest’

Philip Lowe has now complained about inflation only being released quarterly

But on July 28 last year, the Australian Bureau of Statistics revealed annual inflation in the June quarter of 2021 had climbed by 3.8 per cent

This was well above RBA’s 2 to 3 per cent target and more than triple the 1.1 per cent annual pace during March quarter of 2021

Yet on August 3, 2021, Dr Lowe and the Reserve Bank released a statement saying the cash rate would not increase until 2024 – despite the evidence of rapidly rising inflation

‘The board will not increase the cash rate until actual inflation is sustainably within the 2 to 3 per cent target range,’ it said

Should ANZ’s prediction come true, a borrower with an average $600,000 mortgage, by November, would have seen their monthly mortgage repayments surge by $1,060 or 46 per cent compared with early May when the cash rate was still at a record low of 0.1 per cent.

A popular Commonwealth Bank variable in early May was just 2.29 per cent before the RBA raised rates for the first time since November 2010.

In another TV interview on Tuesday Dr Chalmers, who has launched a review into the Reserve Bank, laughed awkwardly when Today host Karl Stefanovic asked him if he had a ‘Philip Lowe voodoo doll’.

‘He’s capable of defending the decisions of the board himself.’

In multiple monthly monetary policy statements last year, Dr Lowe repeatedly promised the cash rate would stay on hold at 0.1 per cent until 2024 ‘at the earliest’.

But in June, Dr Lowe defended his statements, telling former 7.30 host Leigh Sales they were based on inflation at the time.

‘We thought interest rates would need to stay where they were until 2024,’  he said.

‘So sometimes my comments get interpreted as me having made a promise or a very strong statement that interest rates would stay where they were to 2024. 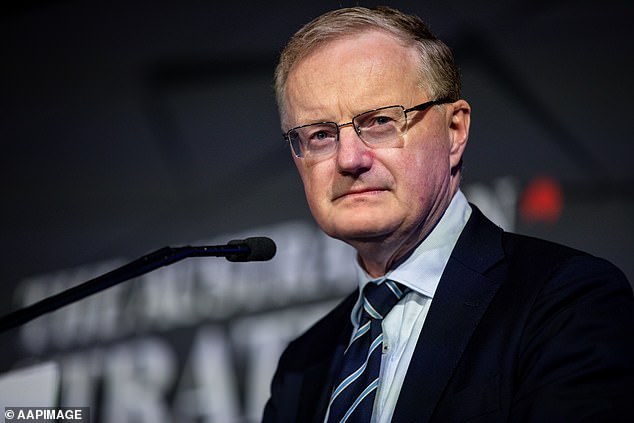 Reserve Bank of Australia governor Philip Lowe (pictured) has since May imposed the steepest interest rate rises on borrowers since 1994 despite last year repeatedly promising to leave the cash rate untouched at a record-low of 0.1 per cent until 2024 ‘at the earliest’

‘In our own communication, our own way of thinking, it was very much a conditional statement – if the economy evolved as we’d expected, we’d keep rates where they were until 2024.

‘But the economy didn’t evolve as we expected. It’s been much more resilient and inflation has been higher. And we needed to respond to that.’

Inflation in the year to March surged by 5.1 per cent – the fastest pace since 2001.

ANZ is expecting the consumer price index to hit an annual pace of 6.3 per cent in the June quarter, which would be the steepest rise since 1990.

The Australian Bureau of Statistics is releasing new inflation data on July 27, ahead of the RBA’s August meeting, with the big four banks expecting a half a percentage point rate rise next month.

This would means three consecutive, monthly 0.5 percentage point rate rises since the RBA in 1990 began publishing a target cash rate.

In the June quarter of 2021, inflation surged at an annual pace of 3.8 per cent, more than triple the March quarter’s 1.1 per cent pace and at a level well above the RBA’s 2 to 3 per cent target.

Despite that, Dr Lowe said on August 3: ‘The board will not increase the cash rate until actual inflation is sustainably within the 2 to 3 per cent target range.

‘The central scenario for the economy is that this condition will not be met before 2024.’

As recently as October 5, Dr Lowe and the RBA said:  ‘It will not increase the cash rate until actual inflation is sustainably within the 2 to 3 per cent target range.

‘The central scenario for the economy is that this condition will not be met before 2024.’

Koch wasn’t entirely correct, with the RBA not making any promises to keep rates on hold until 2024 in their November or December statements.

In June 2021, the RBA said the cash rate would not rise until wages growth improved.

‘It will not increase the cash rate until actual inflation is sustainably within the 2 to 3 per cent target range,’ it said.

‘For this to occur, the labour market will need to be tight enough to generate wages growth that is materially higher than it is currently.

Calculations based on the cash rate rising from a record-low of 0.1 per cent in May to 3.35 per cent by November, as predicted by ANZ. Monthly repayments based on a popular variable Commonwealth Bank rate increase from 2.29 per cent to a projected 5.39 per cent