Nicola Sturgeon today warned Covid passports might be the only way to avoid a fresh lockdown this winter as she faced anger over lack of detail on the rules.

The SNP leader admitted the certification system for nightclubs and other events due to come into force in Scotland from October 1 was not a ‘magic wand’.

But she insisted it might ‘provide us with the ability to get through the winter’ without having to reimpose restrictions, amid an expected resurgence of coronavirus cases.

The grim signal came as Culture Secretary Oliver Dowden refused to rule out extending Covid passports in England beyond nightclubs.

Despite the existing proposals already coming under fierce fire from Tory MPs, Mr Dowden said: If there is a need to further extend that certification according to the public health need we will look at doing so.’

Ms Sturgeon’s plan passed Holyrood yesterday despite objections from opposition parties – including the Scottish Tories, who are taking a different stance to Boris Johnson.

There has been criticism of the vague arrangements, with no definition yet of what constitutes a ‘nightclub’ and the onus on businesses to enforce the rules.

Speaking on the BBC’s Good Morning Scotland programme, Ms Sturgeon said: ‘Vaccine certification is not a magic wand, more than any other restriction is a magic wand, but it may provide us with the ability to get through the winter, keep venues like nightclubs and big events operational rather than having to close them for periods again, while helping to keep people safer. 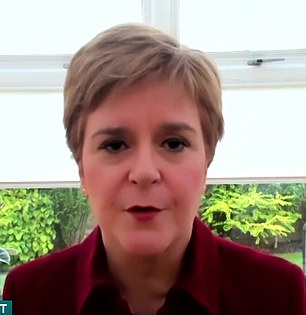 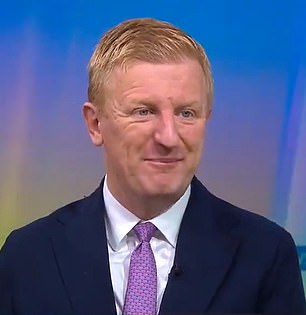 Nicola Sturgeon (left) today warned Covid passports might be the only way to avoid a fresh lockdown this winter. Culture Secretary Oliver Dowden (right) refused to rule out extending Covid passports in England beyond nightclubs 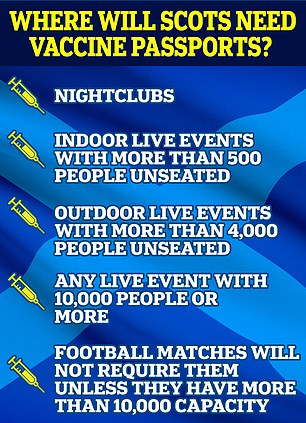 She accused the Scottish Tory leader Douglas Ross and Labour of ‘opposition for opposition’s sake’.

‘Douglas Ross is in the bizarre, and it’s for him to explain this, position where had he been voting at Westminster yesterday – because remember the UK Government have got plans to implement an almost identical scheme – he would have voted for it but because it’s an SNP Government in Scotland, he’s voting against it,’ she said.

‘Let’s just accept that the opposition are very much in an opposition for opposition’s sake mode.’

Pressed on the lack of detail in the proposals, the First Minister said: ‘We have set out the broad outlines of this scheme.

‘People can see how schemes like this operate, because they are already operational in many countries across Europe.

‘We are considering and engaging with the affected business sector on the fine detail of the scheme, so that’s actually the right and proper way to do government.

‘We’ve also built in time so this scheme will not come into force until October 1, to make sure that businesses have the detail and that there is not just overarching guidance in place, but there is a sector-specific guidance.’ 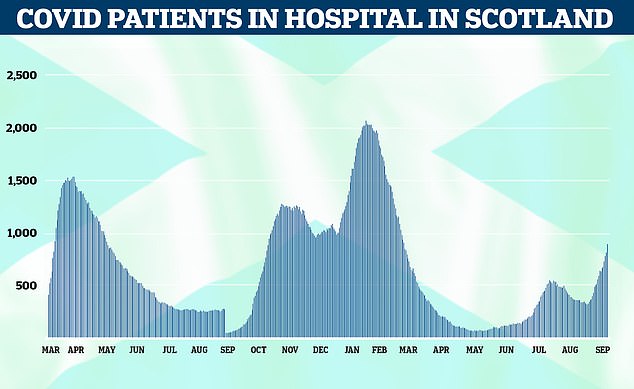 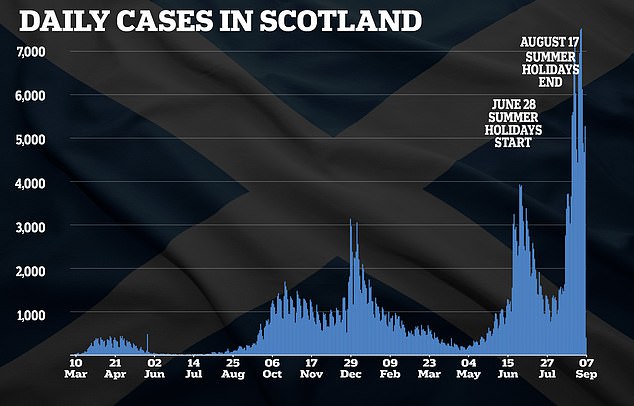 There are concerns over Scotland’s Covid figures, which have seen a surge since children began returning to school from as early as August 18

Asked in a round of interviews this morning whether the Westminster government will implement equivalent measures in England, Mr Dowden said: ‘Well my overall approach to certification – and the prime minister’s and the rest of the government’s – is, in relation to any restrictions, we want as few restrictions for as short a period as possible.

‘But if we need them to protect public health, we will.

‘That is why we have said in relation to very high-risk venues – and a nightclub is an example of that, you have got lots of people mingling very closely to each other, often poor ventilation – we will be looking at bringing in certification for the nightclubs towards the end of the month.’

However, he told Sky News that ‘we are always reluctant to impose further burdens on businesses unless we really have to’.

Vaccines minister Nadhim Zahawi was assailed by a host of Tory colleagues earlier this week as he answered an urgent question on the proposals for using certification in nightclubs and other venues.

Faced with barbs that he was talking ‘rubbish’ and did not really back the policy, Mr Zahawi admitted that it caused him ‘pain’ to ‘curtail people’s freedoms’.

But he insisted it was not ‘normal times’ and the measure would be dropped as soon as possible.

‘It goes against everything I believe in, but nevertheless is the right thing to do,’ he said. 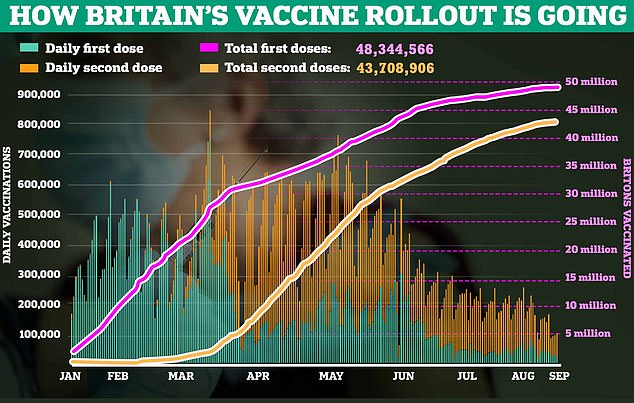 Britain’s Covid outbreak remained flat today despite fears there would be a resurgence in cases after schools reopened last week, official figures show 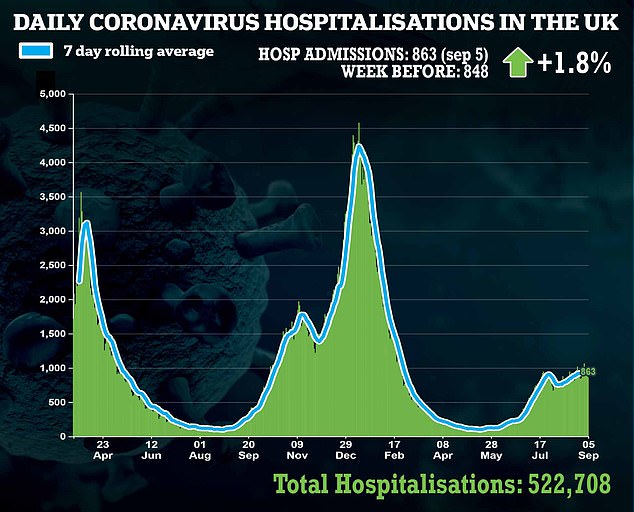 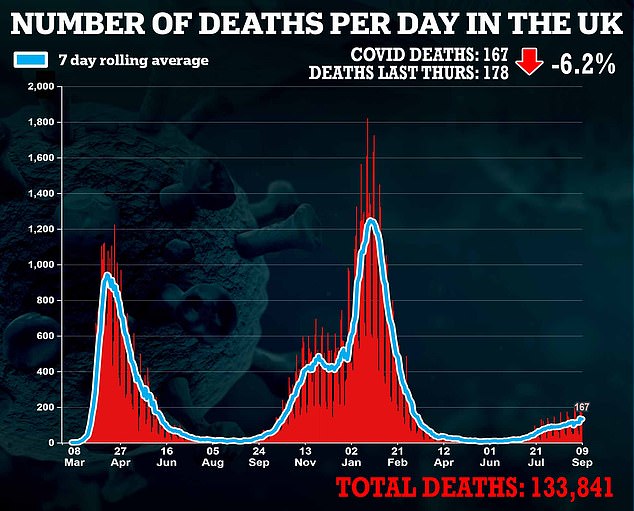 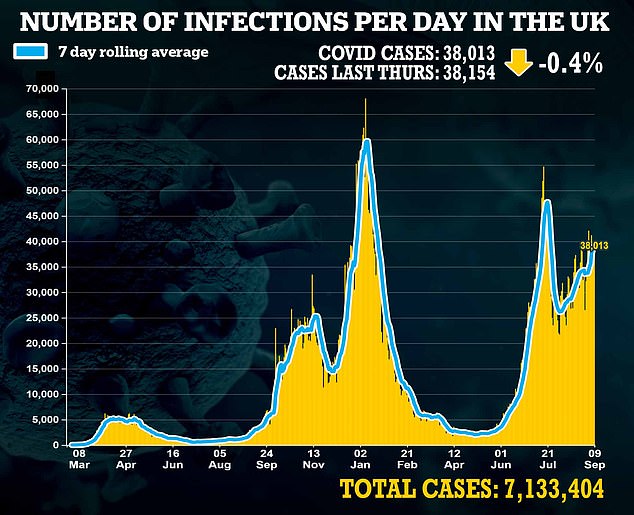