Stunning satellite images have revealed the moment a Saharan sandstorm engulfed the Canary Islands, shrouding the popular holiday destination in a ‘Martian’ shade of orange.

All flights to the islands were cancelled at midday today by Spain’s airport operator AENA due to poor visibility, and departures were also suspended. As many as 230 flights were suspended last night while at least 19 planes had to be diverted due to the storm.

Spaced out landings were allowed at Tenerife Sur, Gran Canaria and Fuerteventura earlier this morning as Spain’s national weather service warned of winds up to 75mph in the area until Monday.

Authorities have issued a red alert for the islands and advised those with respiratory problems to stay indoors. Schools will also be closed all day Monday in response to the storm.

A stunning satellite image has revealed the moment a Saharan sandstorm engulfed the Canary Islands, shrouding the islands in an orange haze and causing hundreds of flight cancellations 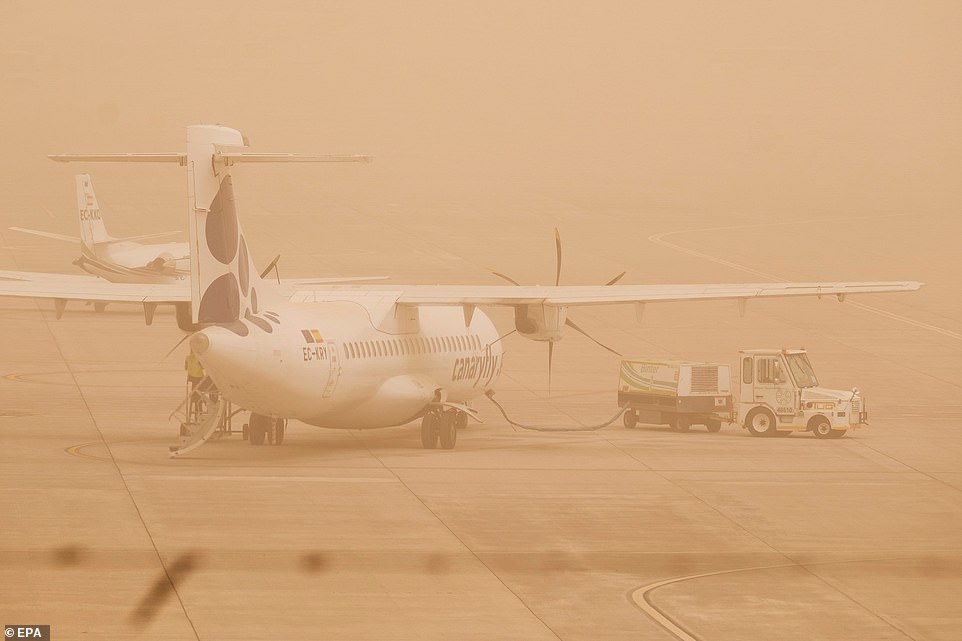 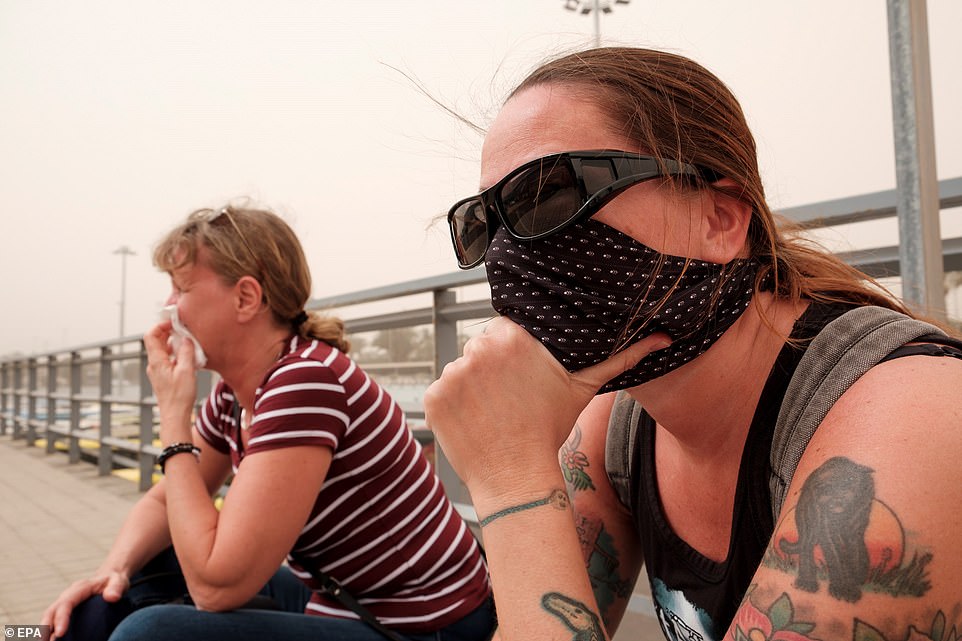 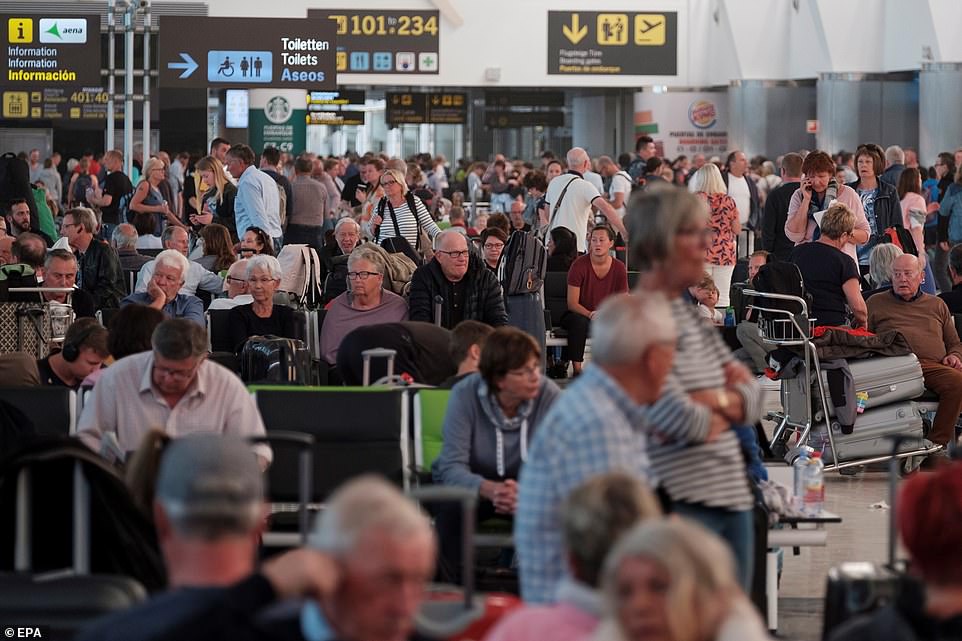 Hundreds of passengers were stranded in the islands airports today as flights were delayed and cancelled due to visibility. This group is pictured in Gran Canaria today, the main airports on the island 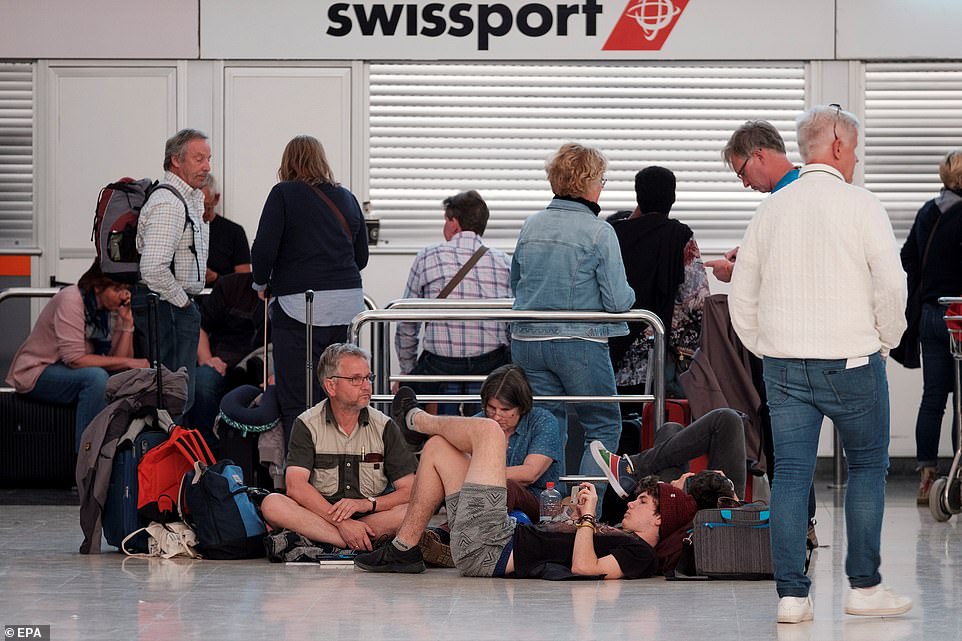 The clip shows the sandstorm stretching across the ocean from the Moroccan coast before reaching the Canary Islands yesterday. It has continued to hover over the islands today.

A video showed a Ryanair plane rocking as it attempted to land in the overcast conditions.

Hundreds of passengers were stuck in airports across the island today and yesterday as they waited to find out whether their flight would be cancelled.

Budget carrier Vueling, a subsidiary of IAG, said yesterday some of its services had been hit and advised passengers to check the status of their flights before heading to the airport.

Spain’s air navigation manager tweeted this afternoon that it was working with other countries to ensure ‘no planes take off towards Canaries’.

‘Safety is our first priority,’ they said. ‘The lack of visibility and dust storm forces us to suspend, for security, the air traffic entering the Canary archipelago. We are working with Morocco to redirect planes that the Canaries cannot take due to bad weather.’ 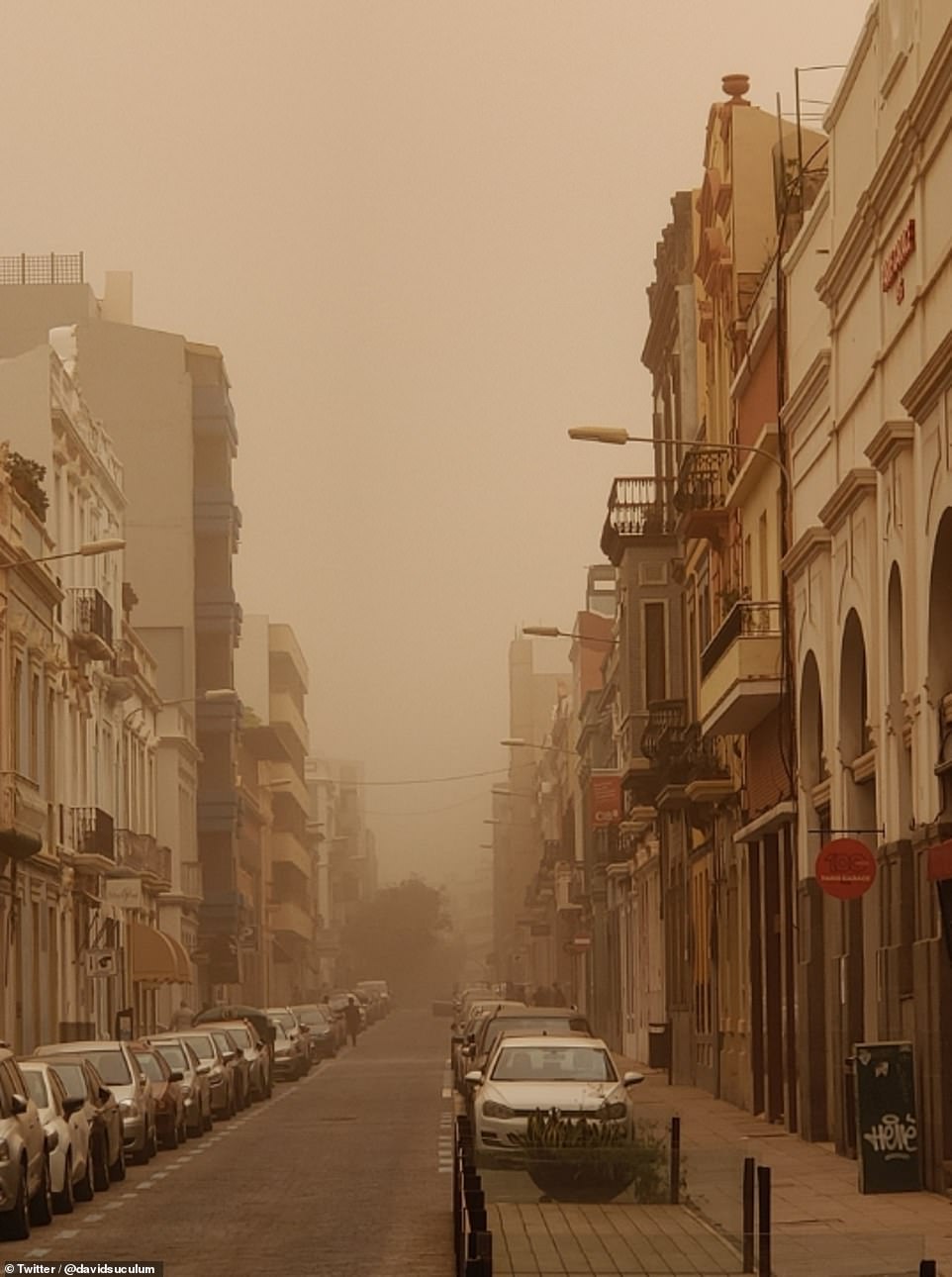 A street on the island is pictured shrouded in orange dust due to the storm. Authorities have advised those with respiratory problems to stay indoors 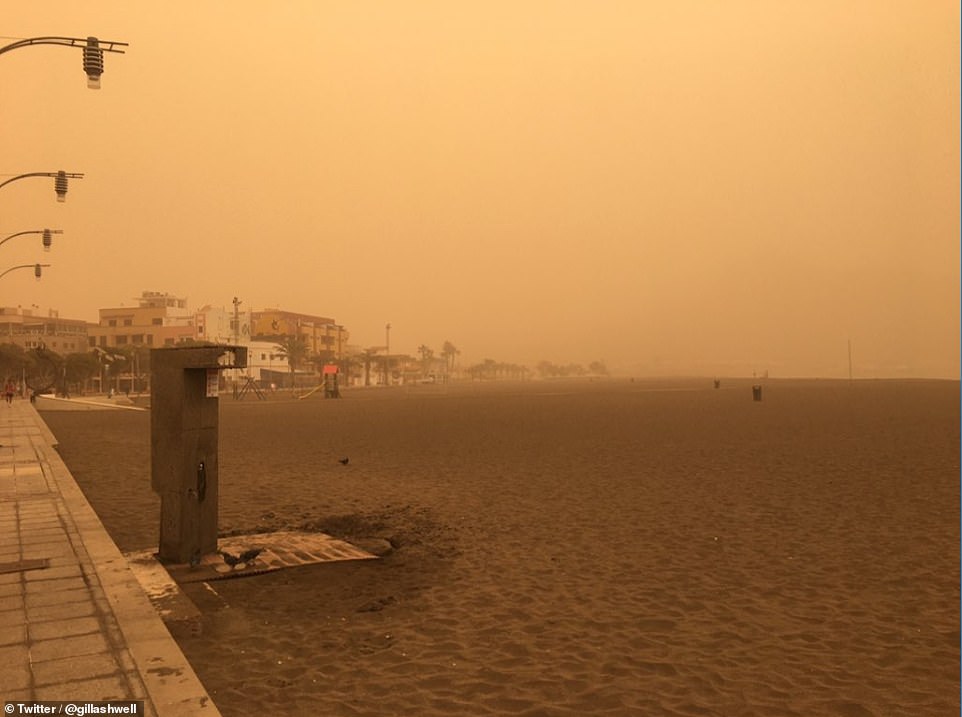 Beaches overcast with a yellow haze have also been pictured on social media. One resident heralded the storm as the worst she has seen on the islands in 14 years 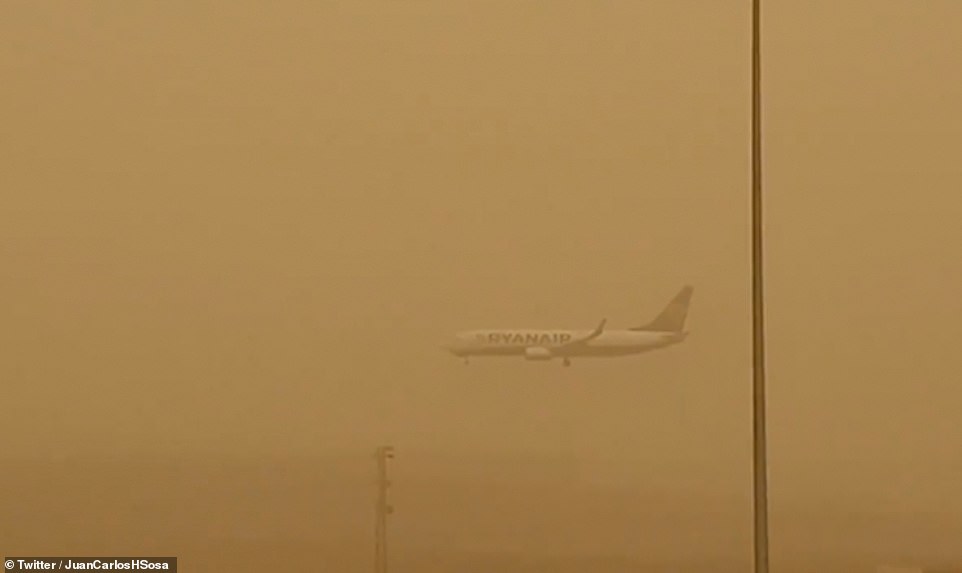 A Ryanair plane attempts to make a landing in the poor visibility. Flights to the islands were cancelled from midday today

One resident heralded the storm as the worst she has experienced in 14 years of living on Fuertaventura. ‘The sky has turned orange!’, they said.

Authorities have issued a red alert for the area and encouraged residents to stay indoors if they have respiratory problems. The Ministry of Education has also announced that schools will be closed on Monday, reports El Pais.

Residents have shared photos of streets and beaches shrouded in orange dust on social media.

It comes as 250 residents on Gran Canaria evacuated themselves to the beaches, as fire swept through the area. Many were able to return to their homes this morning.

The regional government declared a state of alert and advised people to keep doors and windows closed across the archipelago, while authorities in Lanzarote’s capital Arrecife, cancelled all outdoor activities, including some carnival celebrations.

Located around 60 miles off the coast of Morocco, the Canaries are a popular tourist destination for northern Europeans in search of winter sun. 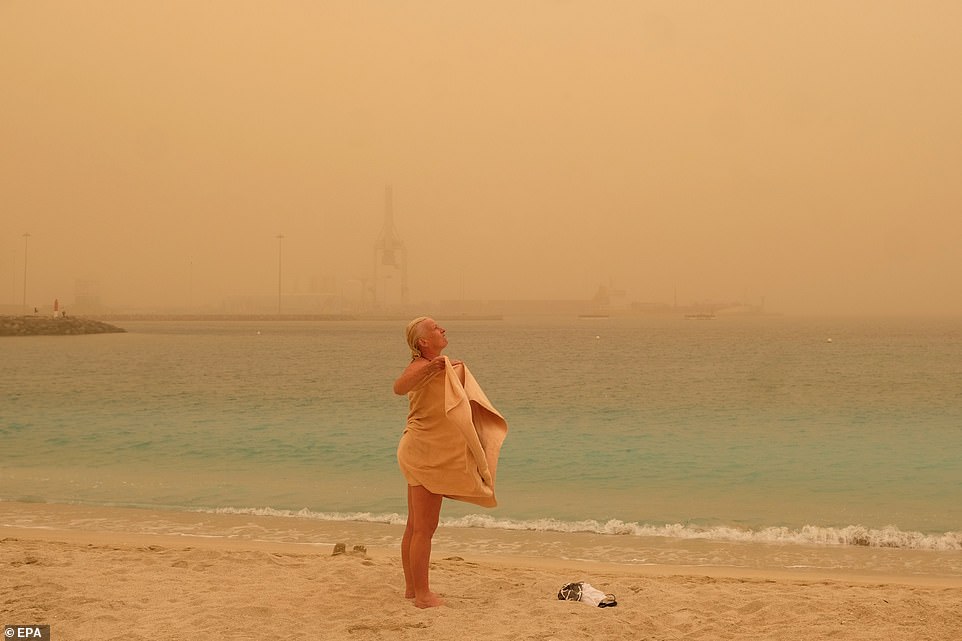 A storm carrying clouds of red sand from the Sahara has hit the Canary Islands, shrouding the region in a haze of orange. Pictured: A tourist dries off after a swim in Chica Beach at Puerto del Rosario, Fuerteventra 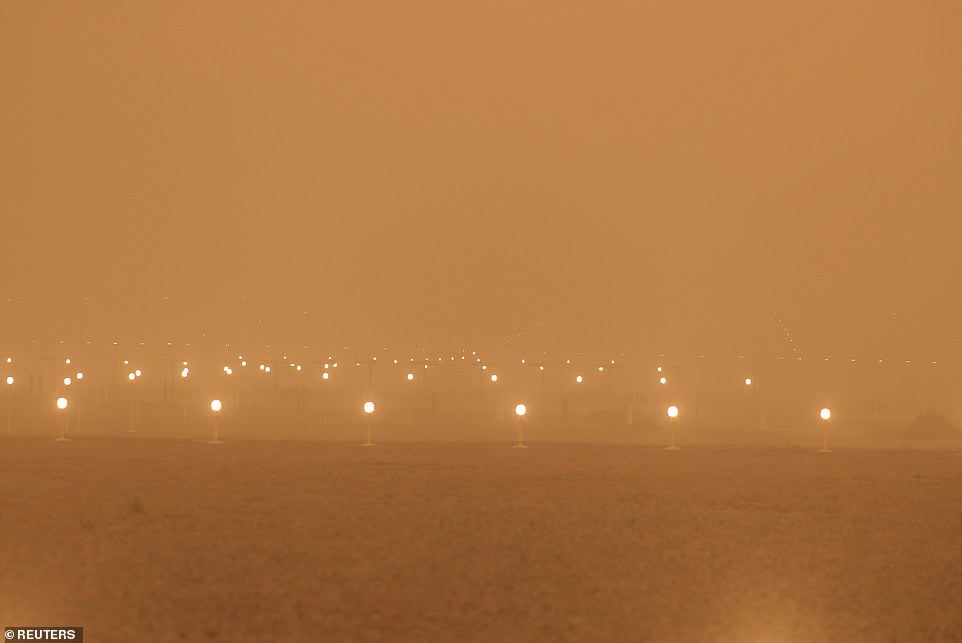 A view of the runway during a sandstorm blown over from North Africa at Las Palmas Airport, Canary Islands, Gran Canaria on Saturday 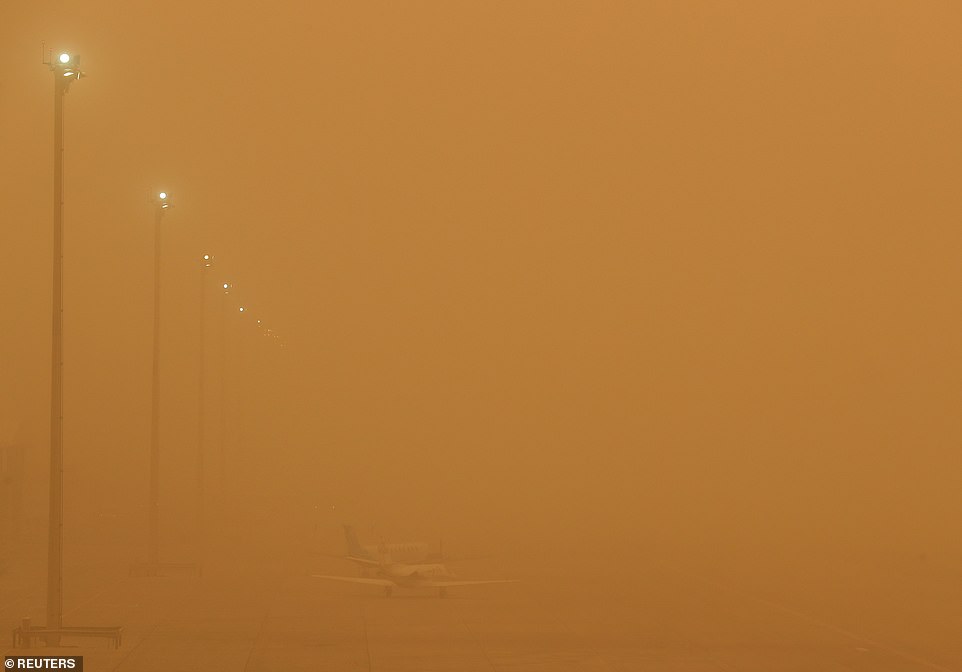 Grounded planes are seen parked on the tarmac during the sandstorm. The conditions have forced Spain’s airport operator AENA to suspend all flights in and out of Gran Canaria and all flights leaving Tenerife on Saturday evening amid severely reduced visibility. 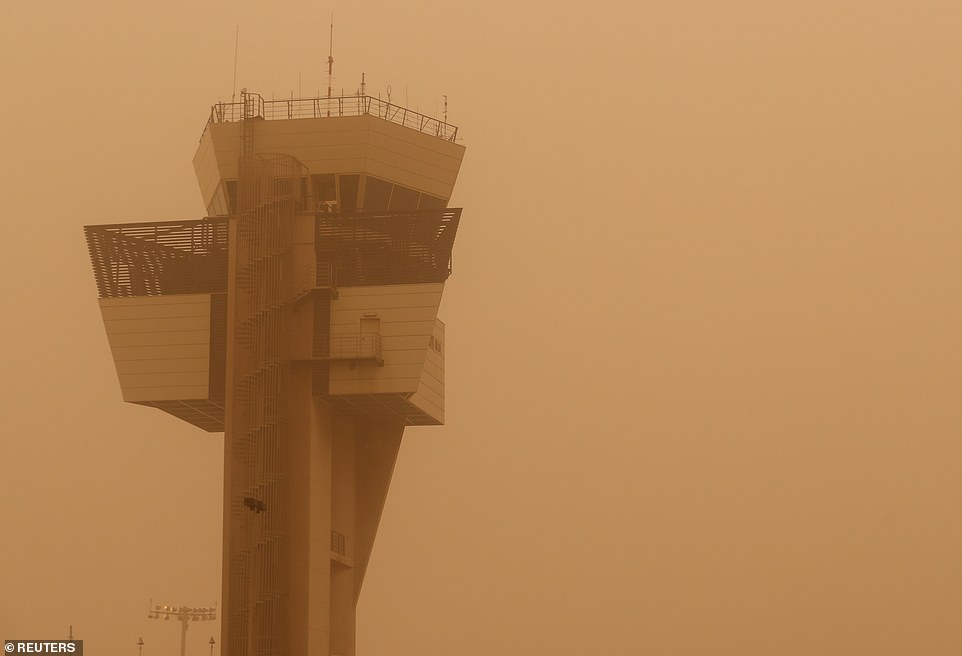 Fuerteventura airport. Budget carrier Vueling, a subsidiary of IAG, said some of its services had been hit and advised passengers to check the status of their flights before heading to the airport 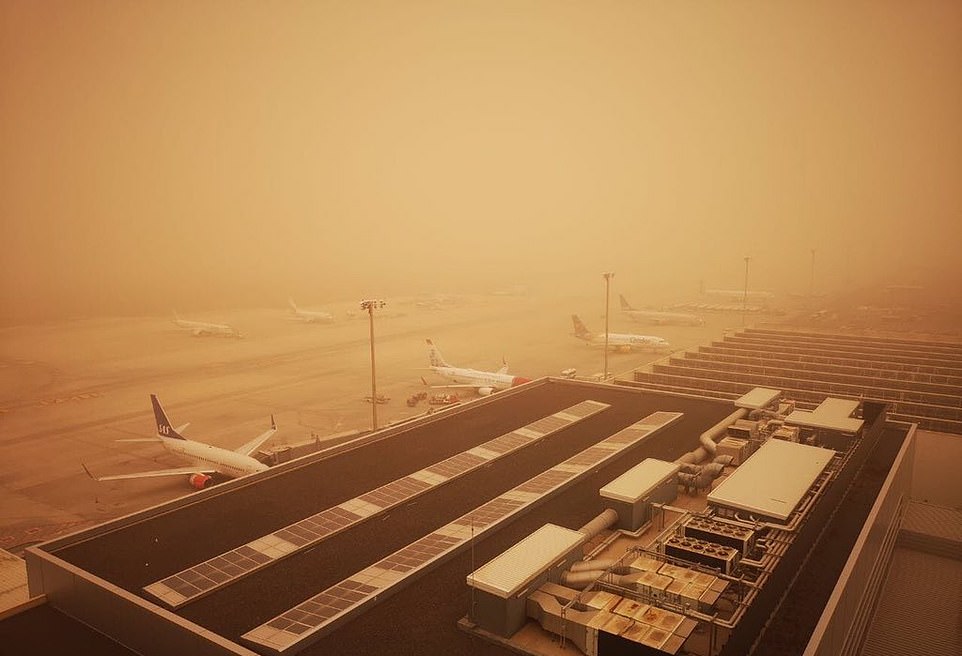 Planes grounded at Gran Canaria airport. Spain’s national weather service warned that winds of up to 75 mph (120 kph) are set to buffet the Canaries until Monday. Gran Canaria, Fuerteventura and Lanzarote are likely to be the worst hit, the weather service said 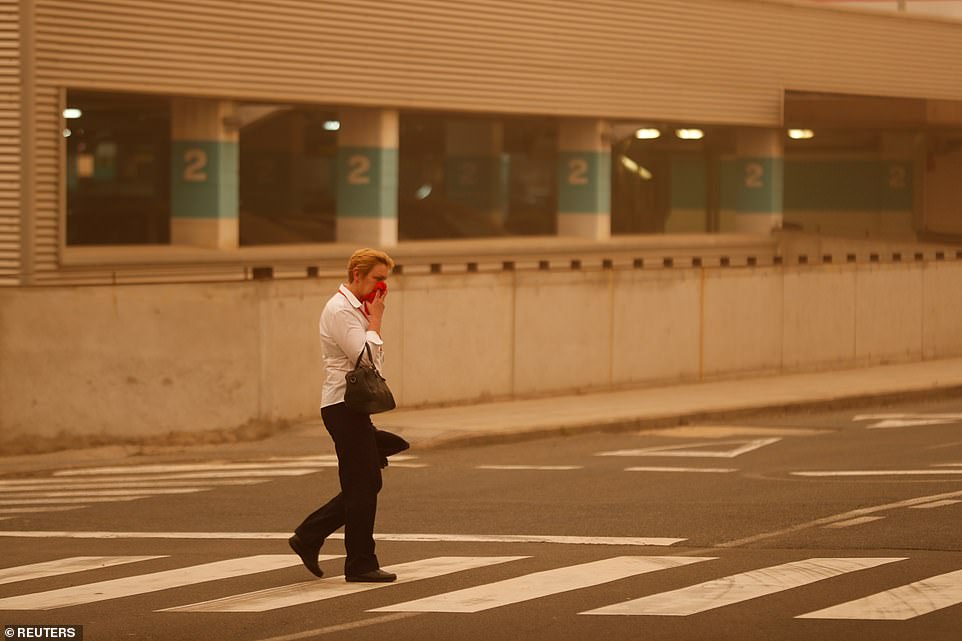 A woman covers her mouth during the sandstorm at Las Palmas Airport, Canary Islands on Saturday 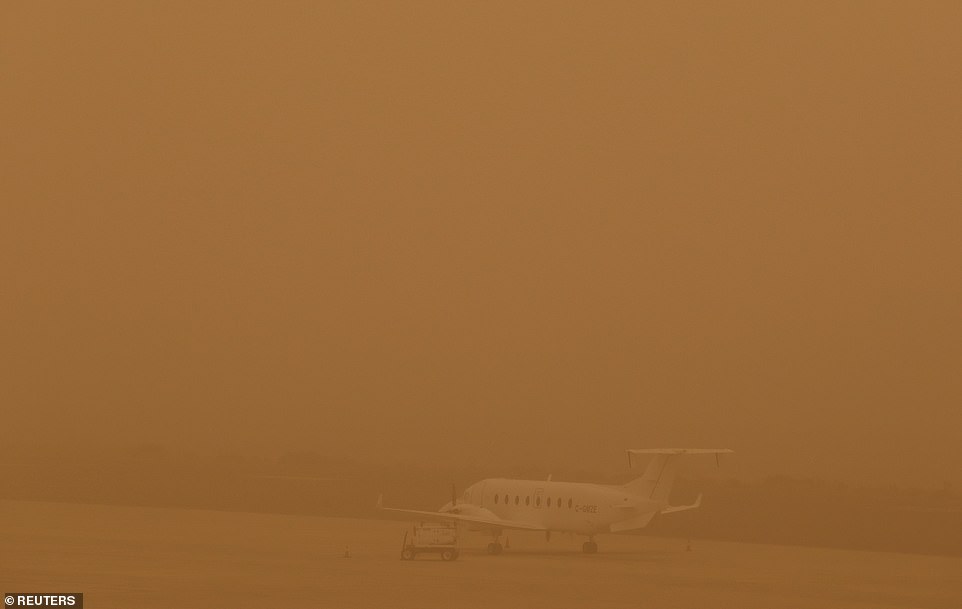 A plane is seen parked on a tarmac at Las Palmas Airport during the sandstorm blown over from North Africa on Saturday. The regional government declared a state of alert and advised people to keep doors and windows closed across the archipelago, while authorities in Lanzarote’s capital Arrecife, cancelled all outdoor activities, including some carnival celebrations 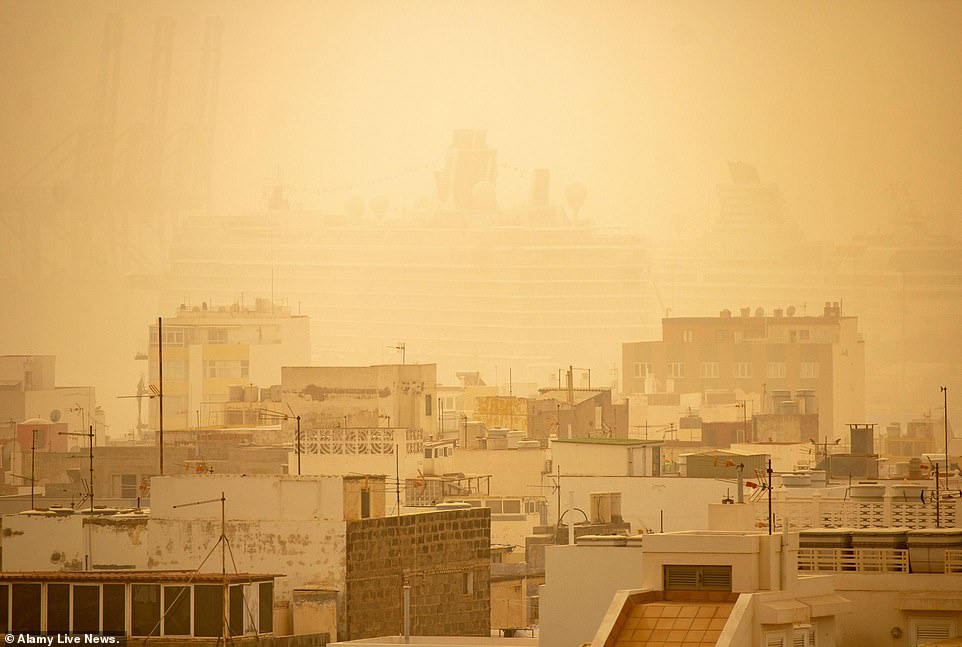 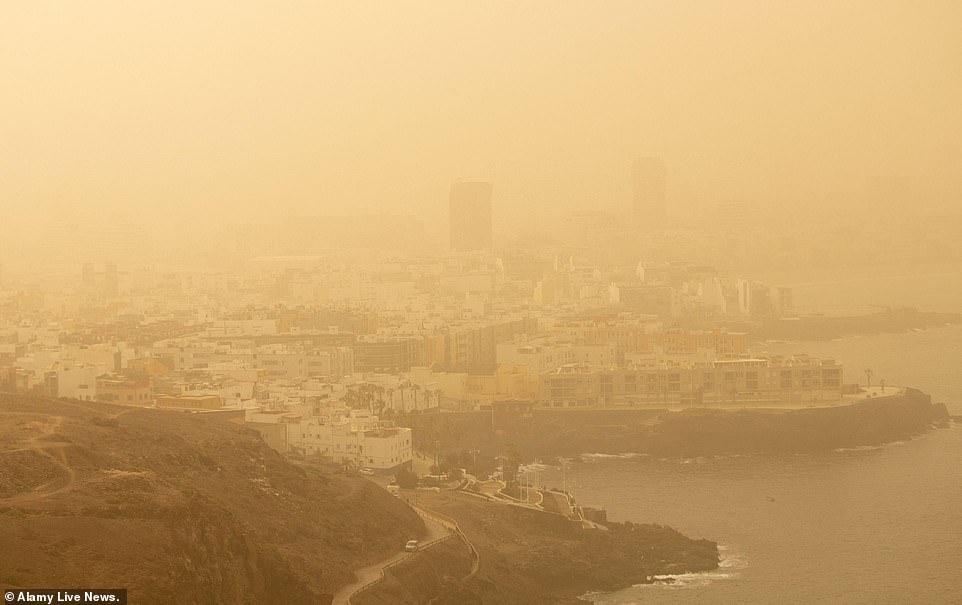