A driver has described being left stunned after spotting an e-scooter zipping past his car on the motorway.

Josh Giff was travelling down the M42 at around 8.40am on Monday when he noticed the electric two-wheeler scooting along in the hard shoulder.

The alarming sight comes amid a debate about the safety of e-scooters on city streets and roads.

Giff said he was between Junction 5 and 6 near Solihull when traffic slowed and he noticed the rider, who his friend managed to snap a quick picture of.

‘I was in shock, couldn’t believe it,’ he said.

‘We all laughed as we had been on the road constantly – it’s not something we see every day.’

He added that the rider looked ‘as if he was on his daily commute’ with no sign of a broken down car he might have been travelling to get assistance with.

‘I have an e-scooter that I use regularly, but I’d never dream of being that stupid,’ Griff said.

‘The M42 is a really busy motorway and this type of activity is not only illegal, but it’s also reckless.

‘We’d remind those using e-scooters to use them properly and familiarise themselves with the law around where they can be used before setting off.’

Privately owned e-scooters are illegal to ride on public roads. Riders face a £300 fine and points on any current or future driver’s licence for using them illegally.

Several cities, including Birmingham, Liverpool and some boroughs of London are trialling e-scooter rental schemes.

Josh Giff was travelling down the M42 at around 8.40am on Monday when he noticed the electric two-wheeler scooting along in the hard shoulder

The Birmingham trial has seen roughly one million e-scooter rides take place across the city since its launch in October last year.

Swedish firm Voi Technology estimated that around 370,000 car trips have been replaced since the beginning of the trial, reducing more than 200 tonnes of carbon emissions.

Gangs dubbed ‘rural wraiths’ are using e-scooters to sneak on to farms and steal GPS systems, insurance claims for which nearly doubled last year to £2.9 million, a rural insurer has said.

Amid the coronavirus lockdowns last year, NFU Mutual said the total number of claims fell by 20 per cent to around £43.3 million in the UK.

But the cost of claims linked to the theft of GPS systems and vehicles such as quad bikes and ATVs remained at more than £9 million, only a 2 per cent drop on 2019.

This included claims for GPS systems which nearly doubled to £2.9 million, up from £1.5 million in 2019.

DC Chris Piggott, from the National Vehicle Crime Intelligence Service, a police unit funded by businesses, said: ‘Rural thieves are becoming more and more sophisticated to get round high levels of security on modern farm machinery.

‘The pattern we are increasingly seeing is of gangs who patiently watch farms from a distance to discover where expensive tractor GPS kit is stored.

‘They generally return at night to steal, and are now using silent electric scooters to get into farmyards undetected and make off at high speed.

‘Thieves are also becoming even slicker stealing quad bikes – watching for hours to rush into farm yards and steal them when they are left unattended for a few minutes.’

But along with the environmental benefits, e-scooters also present some dangers and have already been involved in a number of fatal accidents and were described by a senior Met officer as ‘absolute death traps’.

Simon Ovens labeled e-scooters as ‘absolute death traps’, with officers having seized around 800 already this year.

Concerns of reckless manoeuvring of the scooters such as driving too fast, driving under the influence and ignoring red lights have been prevalent since the announcement of an initiative in London which began in June.

The scheme is initially restricted to a handful of areas including Ealing, Canary Wharf, Hammersmith and Fulham, the Royal Borough of Kensington and Chelsea and Richmond upon Thames.

Accident numbers are thought to be under-reported, as riders using them in prohibited areas are less likely to tell police about collisions.

Alan Clarke, executive of Lime, the e-scooter company involved in the London trial has insisted it will be ‘really clear … just how different a rental e-scooter is from a private-owned e-scooter’.

‘The safety standards are really, really high and that contrasts starkly with private e-scooters, which don’t have to pass any standards at all in order to be put onto the street, because by definition they’re already illegal.

‘I think people are going to really notice that and we certainly expect people to look at the scooters that we’re putting and see how much safer those are.’

He added: ‘There’s a real demand from people to use this form of zero-emission and convenient transport.

‘As we start to build back again coming out of lockdown and bounce back after the pandemic, what we’re already seeing is that people are looking for new ways to travel.’

In 2019, TV presenter and YouTuber Emily Hartridge became the first person in Britain to die in an e-scooter accident when she hit a lorry while riding in Battersea, south London.

‘The scooter was being unsuitably driven, too fast and with an under inflated tyre, and this caused the loss of control and her death’, a coroner concluded at the time of her death. 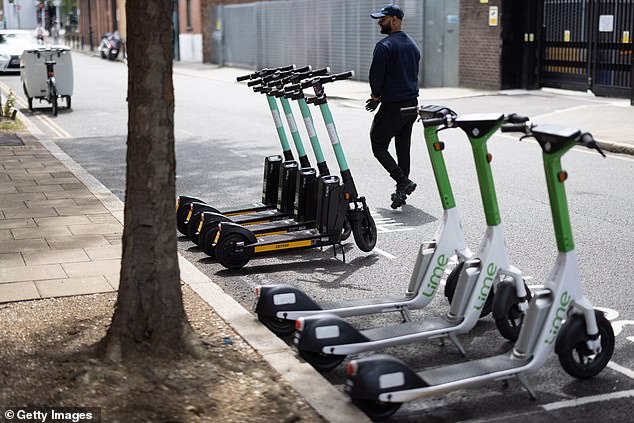 Privately owned e-scooters are illegal to ride on public roads. Riders face a £300 fine and points on any current or future driver’s licence for using them illegally. Pictured: Rental e-scooters

The scooters in London’s scheme can be rented by anyone over the age of 18 with a valid driver’s licence.

The Daily Mail has revealed how e-scooters have been involved in hundreds of crimes including drive-by shootings, robberies and assaults.

Charity Guide Dogs has called for the sale of private high-speed e-scooters to be banned and expressed fear their use means ‘more people with sight loss will be forced to change their route or avoid independent travel altogether’.