When it comes to arguing over who’s more hot-headed, the sexes may never come to an agreement.

But a study now suggests that women actually have a warmer head than men – as their brain temperatures are more likely to top 40C.

Researchers at the MRC’s Laboratory for Molecular Biology in Cambridge found that women’s brains were around 0.4C hotter than men’s.

The study, published in the journal Brain, recruited 40 volunteers, aged 20-40, to be scanned in the morning, afternoon and late evening over one day at the Royal Infirmary of Edinburgh.

Researchers at the MRC’s Laboratory for Molecular Biology in Cambridge found that women’s brains were around 0.4C hotter than men’s which could be due to the menstrual cycle

Researchers – who produced the first 4D map of healthy brain temperature – found the average temperature to be higher than previously thought at 38.5C – whereas the mouth is typically less than 37C. But deeper brain structures were frequently warmer than 40C – the highest observed brain temperature being 40.9C – with the organ typically cooling at night and warming during the day.

While these high temperatures would be considered a fever elsewhere in the body, the researchers say it could be a sign of healthy brain function.

Temperature also increased with age over the 20-year range of the participants, most notably in deep brain regions where the average increase was 0.6C.

Researchers propose that the brain’s capacity to cool down may deteriorate with age. 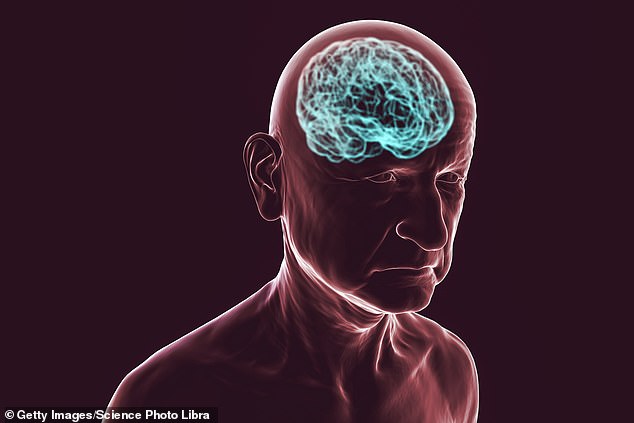 The brain’s capacity to cool down can deteriorate with age

Dr John O’Neill, group leader at the University of Cambridge, said: ‘To me, the most surprising finding from our study is that the healthy human brain can reach temperatures that would be diagnosed as fever anywhere else in the body.

‘Such high temperatures have been measured in people with brain injuries in the past, but had been assumed to result from the injury.

‘There is good reason to believe this daily variation is associated with long-term brain health – something we hope to investigate next.’