Earlier this year, a study hit the headlines after it claimed that Tyrannosaurus rex might actually have been three species – including T. regina, or the ‘queen of the dinosaurs’.

Now, scientists from the American Museum of Natural of History have refuted the claims, saying they lack sufficient evidence to split up the iconic species.

Scientists from the American Museum of Natural of History have refuted claims that T.rex was actually three species, and say they lack sufficient evidence to split up the iconic species 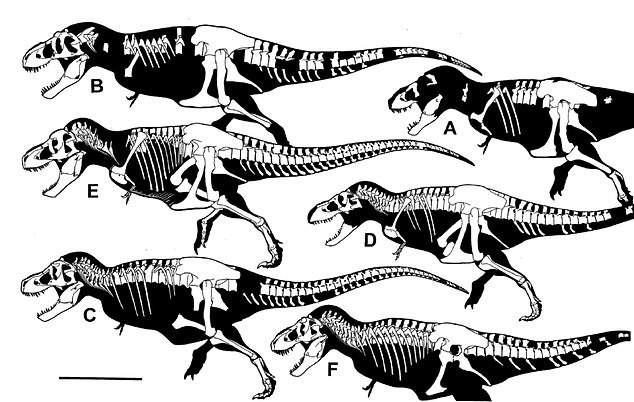 They noted physical differences in the femur, or the thighbone, as well as dental structures and other bones across the specimens – clues that they claimed were suggestive of three different Tyrannosaurus species.

The researchers suggested that the larger specimens should be attributed to a new species called Tyrannosaurus imperator (tyrant lizard emperor).

Meanwhile, the smaller, more slender specimens should be attributed to a species called Tyrannosaurus regina (tyrant lizard queen), they said.

‘Recently, a bold theory was announced to much fanfare: what we call T. rex was actually multiple species,’ said Mr Brusatte.

‘It is true that the fossils we have are somewhat variable in size and shape, but as we show in our new study, that variation is minor and cannot be used to neatly separate the fossils into easily defined clusters.

‘Based on all the fossil evidence we currently have, T. rex stands alone as the single giant apex predator from the end of the Age of Dinosaurs in North America.’

In the new study, the researchers revisited the data presented in the earlier study, and also studied data from 112 species of birds, and four other dinosaurs. 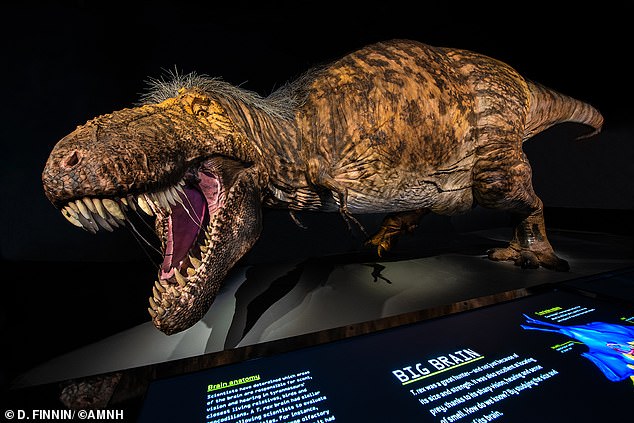 The analysis suggests that the argument for three species of T.rex was based on ‘improper’ techniques and measurements

Tyrannosaurs rex was a species of bird-like, meat-eating dinosaur.

It lived between 68–66 million years ago in what is now the western side of North America.

More than 50 fossilised specimens of T.Rex have been collected to date.

The monstrous animal had one of the strongest bites in the animal kingdom.

An artist’s impression of T.Rex

Their analysis suggests that the argument for three species of T.rex was based on ‘improper’ techniques and measurements.

‘Their study claimed that the variation in T. rex specimens was so high that they were probably from multiple closely-related species of giant meat-eating dinosaur,’ said James Napoli, co-lead author of the new study.

‘But this claim was based on a very small comparative sample.

‘When compared to data from hundreds of living birds, we actually found that T. rex is less variable than most living theropod dinosaurs. This line of evidence for proposed multiple species doesn’t hold up.’

One of the main cases for multiple species in the original study was the variation seen in the size of the second tooth in the lower jaw.

However, in the new study, the researchers were unable to replicate the findings, and even found different results when they took their own measurements of the same specimens.

The researchers also question how the ‘breakpoints’ for each new species using these traits were determined.

In the original study, the number of groups was defined before the test was run.

But when the researchers used a different technique to determine how many groups there were from the data, they found that they are best considered a single group – T.rex.

‘The boundaries of even living species are very hard to define: for instance, zoologists disagree over the number of living species of giraffe,’ said co-author Thomas Holtz, from the University of Maryland and the National Museum of Natural History.

‘It becomes much more difficult when the species involved are ancient and only known from a fairly small number of specimens.

‘Other sources of variation—changes with growth, with region, with sex, and with good old-fashioned individual differences—have to be rejected before one accepts the hypothesis that two sets of specimens are in fact separate species. In our view, that hypothesis is not yet the best explanation.’

As what is arguably the most iconic dinosaur species, T.rex is important for communicating to the public about science, according to the researchers.

David Hone, co-author of the study, concluded: ‘It’s important that we get this right.

‘There is still a good chance that there is more than one species of Tyrannosaurus out there, but we need strong evidence to make that kind of decision.