They say a picture tells a thousand words, which could be why 92 per cent of the online population use emojis every day.

But when flirting over text, there is one icon you may want to steer clear of – the infamous Aubergine emoji.

According to the U.S. Emoji Trend Report from Adobe, sending the suggestive vegetable can make you appear less likeable to the recipient.

But it is not the biggest culprit of failed digital flirts, as the Pile of Poo emoji was voted number one most likely to end a potential romance by the 5,000 study participants.

This could be essential information for dating app users, as the study found 72 per cent of users will send an emoji in a conversation with someone they are interested in.

According to the U.S. Emoji Trend Report from Adobe, sending the suggestive aubergine emoji can make you appear less likeable to the recipient TOP ‘MAKE IT OR BREAK IT’ EMOJIS FOR FLIRTING OR DATING

Emojis that make you seem more likeable when flirting:

Emojis that make you seem less likeable when flirting:

The survey also revealed there are significant differences in how men and women use emojis, as 76 per cent of male respondents said they used them more while flirting, compared to just 68 per cent of women.

Paul Hunt, a typeface designer and font developer at Adobe, said: ‘Using emoji is a sign of emotional intelligence. It demonstrates you are able to be vulnerable and wear your heart on your sleeve.

‘You wouldn’t want to be in a relationship with someone who can’t share their emotions with you, right?

‘I believe the same applies to digital communication.

‘Emoji usage, and being able to communicate emotionally digitally, is part of the expected package of emotional maturity.

‘If you aren’t able to do so, it might leave a potential partner wondering whether you lack those skills in real life too.’

While emojis were invented in 1999, it wasn’t until they were widely introduced as part of smartphone keyboards in 2011 that they really revolutionised online speech.

‘Emoji give people the resources they need to be able to express themselves and show their emotions, whether it be on social media or messaging apps,’ said Kamile Demir, a computer scientist and Adobe representative on the Unicode Emoji Subcommittee.

‘They allow people to convey more than just words on a screen and connect more deeply to others.’

Adobe has been releasing its annual Emoji Trend Report since 2019, the results of surveying thousands of Americans about their emoji usage.

This year they focused on how the tiny images help users express themselves, with 73 percent reporting they make you seem cooler, friendlier, and funnier.

Adobe also revealed that 88 per cent reported feeling more empathy towards someone who uses an emoji, and 75 per cent felt more connected to them. 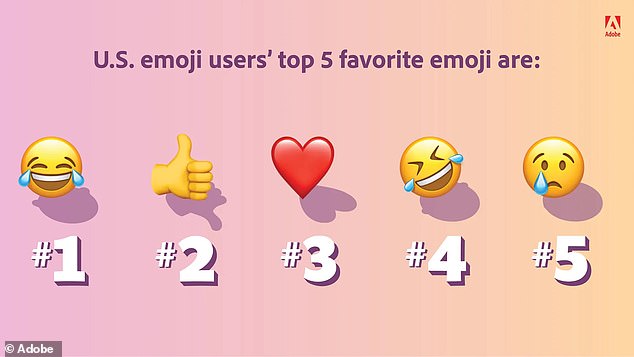 The top four most used emojis in the US are all positive; the Face with Tears of Joy, Thumbs Up, Red Heart and Rolling on the Floor Laughing

While emojis can certainly help one to convey the tone of a message, particular ones can have the opposite effect.

The Cowboy Hat Face, Cherries and Upside-Down Face were voted the three most commonly misunderstood in the Adobe study.

This may not be down to their design, as 50 per cent of respondents claimed to intentionally use emojis differently than their intended meaning.

Generation Z – those born between 1997 and 2012 – are the most likely to do this, with 74 per cent reporting they use a given emoji to convey a different meaning.

The same only goes for 65 per cent of Millennials, 48 per cent of Generation X and 24 per cent of Baby Boomers, showing that demographics play a large part in how emojis are used.

The vast majority of those studied, 91 per cent, claimed they used emojis to bring levity to conversations, making them seem a little less serious.

This goes some way to explain why the top four most used emojis are all positive; the Face with Tears of Joy, Thumbs Up, Red Heart and Rolling on the Floor Laughing.

Their popularity also stems from their inclusivity, as 92 per cent of emoji users agreed that they helped communicate across language barriers.

In 2015, The Unicode Consortium expanded the skin colours available for emojis that feature humans and body parts, and this year also added a pregnant man.

According to Emojipedia, an emoji reference website, this icon is to recognise that ‘pregnancy is possible for some transgender men and non-binary people’.

Despite these additions, two in five users still reported that their identities are not reflected in the current emoji offerings, and 83 percent agree that they should still offer more representation.

Emojis are an important tool in opening up conversations about cultural and societal issues, with 75 per cent thinking that they can help raise awareness of diverse groups of people.

Moose, shaking face and pink heart are among the new emojis coming to your phone in Unicode 15.0 update

Emoji fans rejoice – the pink heart is finally being added to the smartphone keyboard!

This is one of the 31 brand new emoji that have just been approved by The Unicode Consortium, the body for standardising characters in the world’s writing systems.

The new Emoji 15.0 set also includes a shaking face (I’m shook), a moose, stem ginger, the Wi-Fi symbol and a pair of maracas.

Sadly you won’t be able to deploy them in your group chats just yet, as platforms owned by Apple, Google and Meta first have to implement them into their software.

Google and Android platforms are likely to release support for the new emojis between October and December, while iPhone and Samsung users may have to wait until next year. 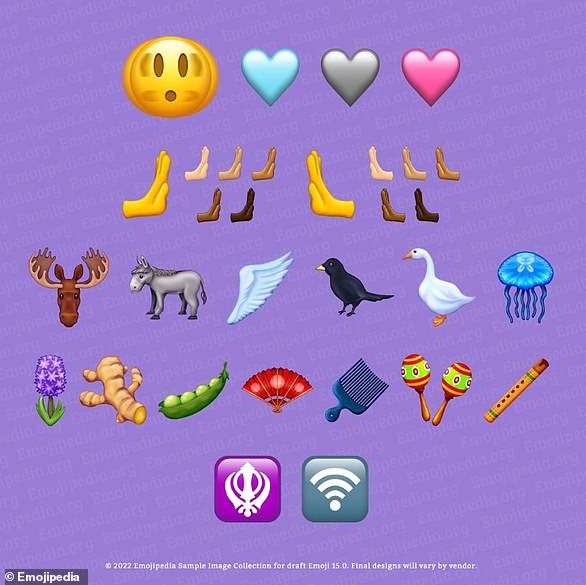 The new Emoji 15.0 set includes a shaking face, a moose, stem ginger, the Wi-Fi symbol and a pair of maracas