Students are calling on private landlords to stop charging them rent for accommodation they can’t live in after being stranded at home by the latest Covid lockdown.

The National Union of Students (NUS) said it was ‘unacceptable’ that no support is being made available for those who travelled home for the holidays and have since been told not to return to campus.

Saffron Headech, who studies professional policing at Birmingham City University, has been unable to come back to her studio flat in the city as a result of the new restrictions, but is still to be charged for rent, even though the property is laying empty.

The 20-year-old said Nido Globe Works still expects her to pay £169-per-week from her student loan for the flat on Cliveland Street, in Newtown – leaving her with just £10-a-week to live on.

It is unlikely she will return to the student accommodation until mid-February at the earliest due to the pandemic and has made her feel she is effectively ‘throwing £1,000 into the fire’ over the next six weeks.

Saffron Headech, who studies professional policing at Birmingham City University, has been unable to come back to her studio flat in the city as a result of the new restrictions, but is still to be charged for rent, even though the property is laying empty

Lockdown in Wales has been extended for three weeks and will likely force schools to continue lessons online until at least the February half-term.

First Minister Mark Drakeford warned the pandemic is at a ‘significant point’ and said said measures will be tightened in ‘key areas’ to stem the spread of infection.

The squeeze could see supermarkets and offices told to step up efforts to make premises Covid-secure.

Mr Drakeford also warned that unless there was a ‘significant’ drop in cases before January 29 – when the next three-week review of the regulations is carried out – school and college students will continue remote learning until the February half-term.

The second year student has urged Nido Globe Works to ‘please treat us like human beings and not just money machines’ – but she says her pleas for compassion and decency have fallen on deaf ears.

‘The Government said in the summer that universities and private hall providers should be fair with their rent fees. I had signed my contract with them (Globe Works) in December 2019 before Covid was even a thing,’ Saffron told BirminghamLive.

‘We’re being forced to pay for empty rooms even though we want to be in our rooms we are legally not allowed to return.

‘Therefore how is it fair we are being forced to pay full price for these empty rooms?

‘We ask landlords to show some compassion, to show empathy and decency to understand that students are struggling mentally and financially now more than ever.

‘It’s so hard to be a university student at the moment let alone with added pressures of being forced to pay for a room we are not allowed to go back to. This money is needed by students, it’s important.

‘So I myself, among many other students, are asking our landlords to show compassion when it comes to rent fees. We want to be treated like human beings – not money machines.’

Saffron, who is currently living at home near Lowestoft in Suffolk, said for a lot of people student loans do not even cover their rent and they have to pay out of the pocket for the rest of it.

She said her student loan only just covers her rent and her accommodation contract lasts for 44-weeks.

‘It leaves with me with about £10 per week. When you take into account your food, laundry, travel – that is nothing,’ she said. 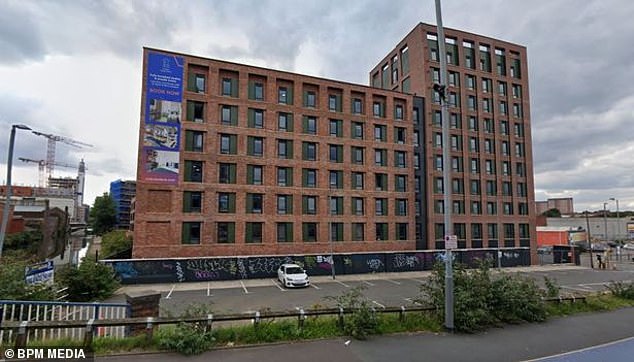 The 20-year-old said Nido Globe Works still expects her to pay £169-per-week from her student loan for the flat on Cliveland Street, in Newtown – leaving her with just £10-a-week to live on

‘I know people are struggling with money. From when I’ve paid my rent to when we are supposed to go back in mid-February I will have basically thrown away £1,000 into the fire because I’m paying for an empty room.

‘They are still expecting us to pay for a room we are legally not allowed to go back. It’s not like we don’t want to go back.

‘We just don’t want to pay for an empty room. The six-weeks worth of money up to the point where we’re allowed back really is not going to put a dent in their pockets.

‘But with us it’s burning holes in our pockets. The difference is unbelievable. Landlords are earning a living – but students aren’t getting any money.’

Saffron, who is looking to go into the probation service after university, had used the self-contained flat from September to mid-December last year.

The student was paying £169-per week, but has since had it reduced it to £136 after she lost her job due to Covid’s impact on the hospitality sector.

She had got a role working behind the bar at the O2 Academy in the city – but when the pandemic struck it was forced to close. As she had only just completed two shifts at the start of March she did not qualify for furlough.

‘It’s been really difficult. Students are just feeling so deflated. On top of the same workload, they are feeling like they are getting less teaching,’ said Saffron.

‘On top of that is stress about accommodation and financial stress. ‘Everyone knows students are poor but before coronavirus you could get a job fairly easily to tide yourself over. Now it’s just so difficult as everyone is in the same boat. 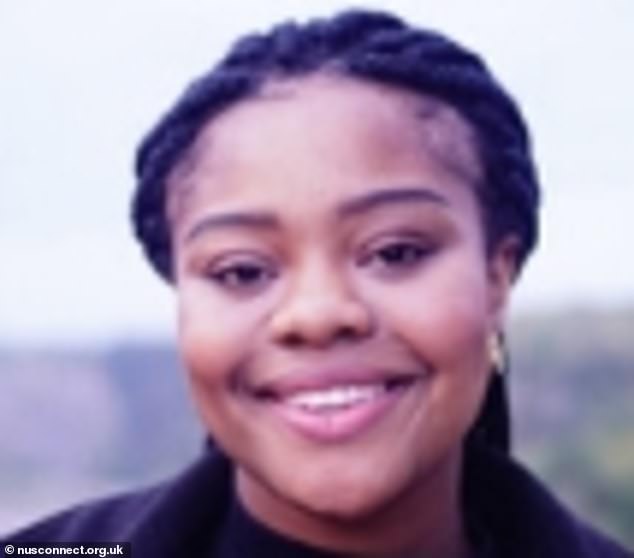 Saffron’s concerns have been echoed by Hillary Gyebi-Ababio, NUS UK Vice President, who is calling for more support over the coming weeks and months

Her concerns have been echoed by the NUS, who is calling for more support over the coming weeks and months.

Hillary Gyebi-Ababio, NUS UK Vice President (Higher Education) said: “The government’s ‘student travel window’ told students to leave their term-time accommodation by 9 December 2020 and students are now being told not to return until at least mid-February and likely beyond.

‘It is simply unacceptable that students are being told to not live in housing they have paid for, on public health grounds, yet are receiving no government support.

‘All student renters must now be offered rent refunds and the option of leaving their tenancy early, if universities and landlords need financial support to make this happen then government must step-in. Scotland legislated to do this, Westminster must now follow.”

In an email to Saffron on January 5, Nido Globe Works told her the position remained unchanged.

‘Regrettably, we cannot waive or discount any accommodation licence fees,’ it said.

‘Consequently, the cancellation policy remains as agreed in the Licence agreement and the Licence fee payment is due.

‘We therefore would kindly request all students meet their obligations and pay any outstanding Accommodation Licence fees under the terms of the Licence agreement.’