Aminata Daboh, 20, from Birmingham, has set up a GoFundMe page to pay for the reduction of her ‘a lot of emotional distress and physical pain throughout her teenage years’.

In a lengthy plea, the law and business management student explained how she struggles to do sports because of her ‘blessing’.

She added she initially tried to get the reduction paid for on the NHS but felt discouraged by a male GP who told her it was  unlikely to be publicly funded.

‘The pain is unbearable now. Going private and spending thousands of pounds is not something anyone wants to do but this type of pain and discomfort is not bearable,’ she said.

‘Bras dig into my torso and shoulders. I can’t sleep on my front because it’s uncomfortable.’

She went on to say that when she was more sporty and energetic when she was younger, but has since been able to find a bra to support her chest while she exercises. 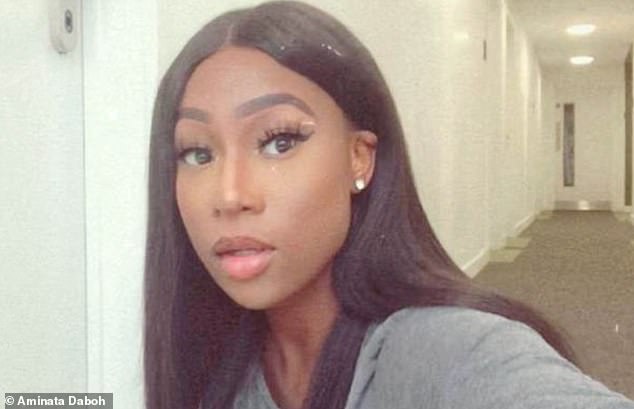 Aminata Daboh, 20, from Birmingham, has set up a GoFundMe page to pay for the reduction of her ‘a lot of emotional distress and physical pain throughout her teenage years’

In a lengthy plea, the law and business management student explained how she struggles to do sports because of her ‘blessing’

Writing on her GoFundMe page, she said: ‘From when I was in year 6 my breasts started growing at a really rapid rate and by the time I was in year 10 I was a 32JJ which is incredibly big for a 5’2, 14/15 year old in secondary school.’

CAN YOU GET BREAST REDUCTION SURGERY ON THE NHS?

Breast reduction surgery is done to reduce the size and weight of a woman’s breasts, and involves removing fat, tissue and skin from the chest.

Genes, hormones and body shape and size may determine how large a woman’s breasts are – usually they are in proportion to the rest of the body but some women’s may be exceptionally large.

The NHS will not usually do a breast reduction for cosmetic reasons.

However, it may be considered if a women is experiencing effects like backache, neck or shoulder pain, rashes or skin infections beneath the breasts, or psychological distress.

The NHS may also consider the size of a woman’s breasts, their weight, their age, whether they smoke, and whether other solutions have been tried.

And local funding availability also plays a role – different NHS boards around the country have different criteria so women living in some areas may be more able to get the surgery than those in others.

‘I was always slightly insecure about my body but as I got older it became worse.

‘Eventually a family member introduced me to the prospect of a breast reduction surgery.

She also explained how she has lost weight, but the size of her boobs has not gone down, and that the reasons are purely medical.

She said: ‘A lot of people think the reason for breast surgeries is for vanity which is not the case here.

‘On the outside having big breasts looks good to some people however its a constant weight to carry. I am now 5’4 and have a quite a small frame and my breasts are a currently a 32H.

‘I have to literally wear a bra with EVERYTHING and if you’re a girl already know how agonising and inconvenient that can be! It’s also painful because my back is constantly sore and my bra straps do dig into my shoulders and leave indentations.

‘I can rarely exercise because it is difficult to find a bra that properly supports them without causing strain on my back, shoulders and rib cage.

‘I do take light pain killers when I am in pain to help relieve it but its not something I want to continue doing.

Adding that surgery is her ‘last option’ she continued: ‘It is also difficult to find clothing and even a bra that is comfortable and flattering as my torso is significantly disproportionate to my bottom half.

‘In addition, everything I wear from a simple t shirt to a blouse becomes very revealing and tight around my chest area which means I usually have to get a bigger size or just stick to baggy clothing because I feel deeply uncomfortable and self conscious with people looking at my body and the way my body looks in and also out of clothes.

‘They also invite a lot of unwanted attention from people, which makes me feel really anxious and unsafe a lot of the time.

So far, she’s raised more than £1400 for her surgery – which is less than half of her target.