There is perhaps no more important time to educate people about their finances than when they start to take responsibility for them.

Unfortunately, the past couple of decades has seen Britain make a colossal hash of that, as students have been forced into an increasingly crazy financial system.

The latest chapter in this sorry tale involves the interest rate charged on student loans being due to rise to 12 per cent.

Yes, you read that right, students and some graduates are in line to pay early 1990s-style interest on the tens of thousands of pounds of debt the current system encourages them to rack up.

Flying high: Inflation is at its highest level for 30 years and RPI, at 9 per cent, which student loan interest rates are based on is even higher than CPI at 7 per cent.

This is because the student loan system bases interest on retail prices index inflation – a measure considered dubious enough not to be an official national statistic – and then for higher earning graduates and, even more bizarrely, those currently at university it adds 3 per cent.

This is the extra sting in the tail for a student loan system, where the official and usually lower CPI inflation rate was ignored in favour of the out-dated RPI measure.

Rates are revised every September and the month that counts for the RPI reading is March. When this figure arrived yesterday it came in at 9 per cent.

This means that lower earning graduates on the post-2012 system will pay 9 per cent – a rate in line with RPI – and higher earners and current students will pay 12 per cent.

As some points of comparison, the Bank of England base rate is 0.75 per cent, the Government’s 30-year gilt borrowing cost is 1.95 per cent, and the average five-year fixed rate mortgage is at 3 per cent.

Of course, student loan borrowing is not directly comparable with any of those lending benchmarks, but it is effectively secured on the individual themselves for at least 30 years.

After those three decades, any debt not cleared gets wiped, something used as justification for the system that was ushered in along with £9,000-a-year tuition fees in 2012.

‘Don’t worry about the debt’, students were told. ‘The monthly payments aren’t too much and lots of you will never end up fully repaying it.’

Quite why successive governments have thought this is a wise message to introduce young adults to the world of managing their finances has always been beyond me.

I am fairly certain that most 18-year-olds taking on tens of thousands of pounds of lifetime debt don’t really understand what they are signing up for, how they will repay it, and how the interest rate on loans works.

I also think it’s not too great a stretch of the imagination to suggest that were a bank offering widespread finance on a similar confusing basis to financially naïve customers, it might find itself hauled over the coals by the watchdog. 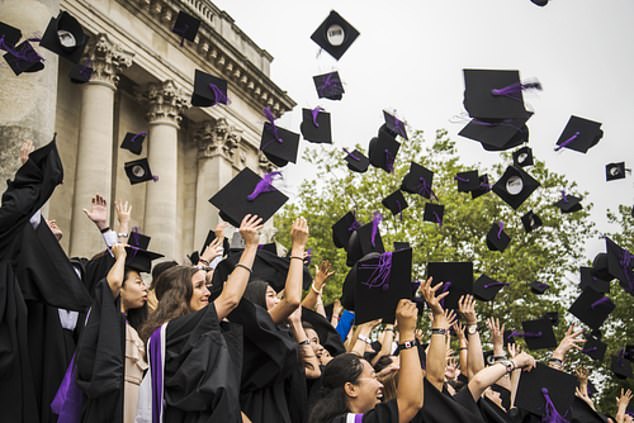 Up in the air: Today’s students and recent graduates have already been given a raw deal on fees and loans compared to those who came before them, will they now get a 12% rate

Students though have little choice but to accept the status quo.

Some may have parents who are wealthy enough to pay their way; although you need seriously deep pockets to do that – and even deeper ones to then play Bank of Mum and Dad for a house deposit later too.

For most though, it’s a stark decision, accept the student loan system with all its flaws or don’t go to university.

As a nation though, we don’t have to accept it and I think it’s high time we started playing fair with students.

A good place to start would be for the government to step in swiftly and confirm that the student loan interest rate won’t rise to 12 per cent or even 9 per cent.

Students and graduates are among those who suffered the greatest costs in terms of their education, careers, earnings, and wealth from the Covid pandemic lockdowns. They did this to protect others, whilst being at a very low risk of falling unwell.

They should be protected from the knock-on pandemic inflation spike and have their interest rate capped – perhaps at 5 per cent, which would already be a reasonably high rate.

The IFS explained yesterday that there is a condition in the loans that allows for this.

It said: ‘There is a little-known legislative provision that was meant to avoid precisely this situation. By law, student loan interest is not allowed to rise above interest rates “prevailing on the market”.’

This is considered to be the average interest rate on unsecured commercial loans and the latest Prevailing Market Rate for February 2022 is 6 per cent.

And even without this clause, we know the Government can step in and bend the rules when it suits: pensioners denied their triple lock increases this year can attest to that.

Meanwhile, those of us with long memories can recall students getting diddled on loan rates at the other end.

In 2009, when deflation rather than inflation was the big threat, March RPI came in at -0.4 per cent. At the time post-1998 student loan interest rates were simply RPI and so the big question was whether graduates would see negative interest.

This would have seen their loan balances slightly reduced and monthly payments clear the debt faster.

Did negative rates in line with RPI happen? Of course, they didn’t.