Strictly star Tyler West flew 12,000 miles in just over a day to be best man at his brother’s wedding in Mauritius for three hours.

The Kiss FM presenter, 26, told MailOnline he was determined to fulfil a promise he made older brother Lewis, 31, that he would be present for his nuptials, despite competing in the BBC dance show.

During his brief stay on the island, Tyler was able to get ready alongside the groom and watch the vows being exchanged before having to jet back to London for training with dance partner Dianne Buswell, 33.

However, the emotional DJ wasn’t able to watch the couple’s first dance and is using that as motivation in the competition as a tribute to his brother and new wife Yasmin, who say their eternally grateful for his dedication.

‘I’m an emotional wreck’: Strictly star Tyler West flew 12,000 miles in just over a day to be best man at his brother’s wedding in Mauritius for three hours 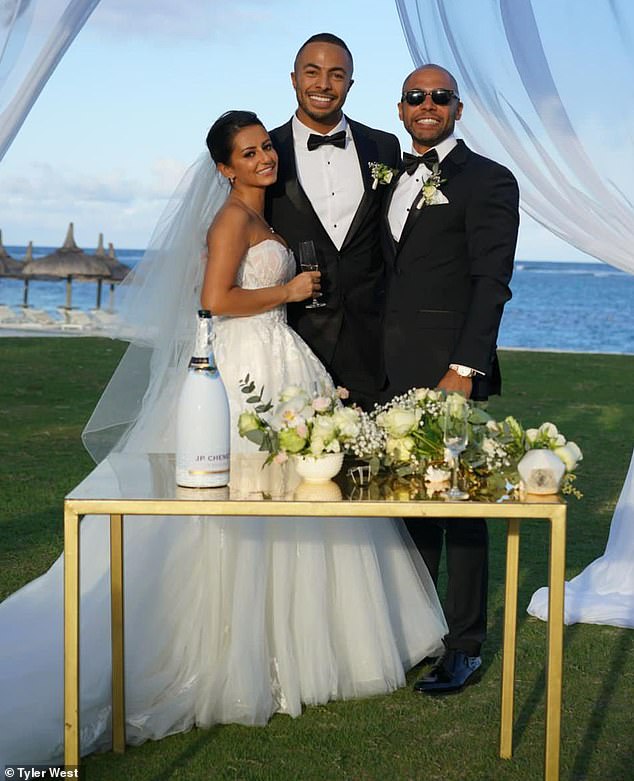 ‘My brother and I are so close’: The Kiss FM presenter told MailOnline he was determined to fulfil a promise he made older brother Lewis that he would be present for his nuptials, despite competing in the BBC dance show

Tyler told MailOnline: ‘I’m an emotional wreck. I landed at 7:30am and I went home, changed my suitcase over and I’m on my way to training.

‘I was only in Mauritius for three hours. I trained all day Tuesday, and I went straight from training to the airport and I got there at 8pm. I arrived in Mauritius, who are three hours ahead, the next morning and the flight was about 12 hours.

‘I was held up at the airport for two hours and it was an hour transfer to the hotel where my brother was getting married. I just got there in time so that I was getting ready with the groomsmen.

‘I watched the ceremony, he said his vows and I do, and it was emotional but as the sun was going down and everyone was having their photos taken, I had to say my goodbyes and I went straight back to the airport. I got there at 3pm and I left just before 6pm for the airport.

‘My brother and I are so close, so I was never going to miss that moment where he said I do. He was so overwhelmed I was able to be there.’ 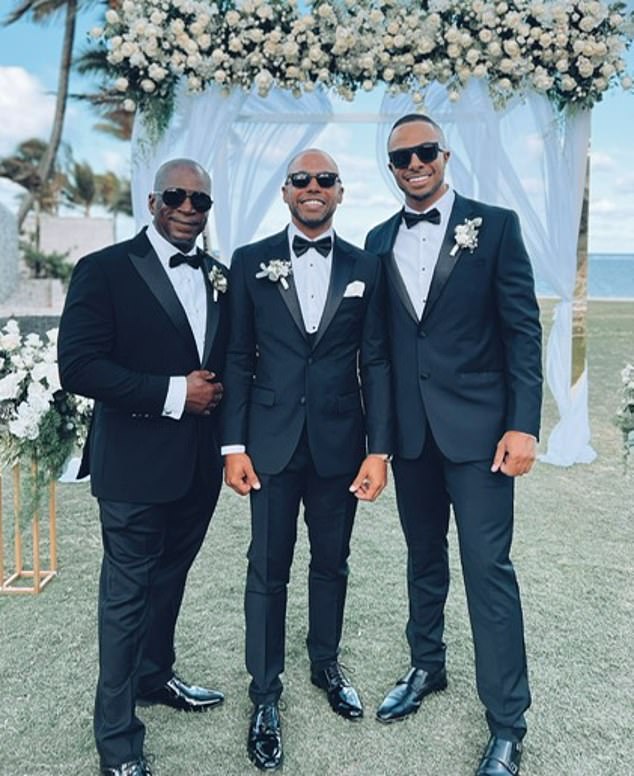 ‘We pushed aside any bitter memories’: The wedding was particularly special for Tyler because his entire family were under the same roof for the first time ever (Tyler pictured with his dad and brother Lewis) 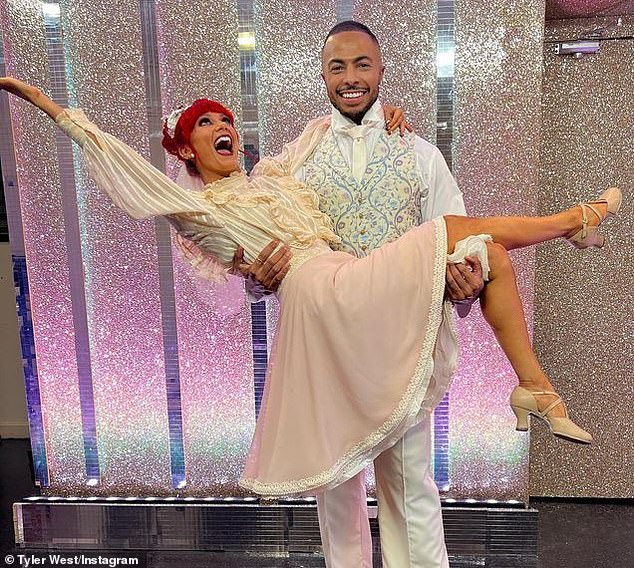 Dedication: During his brief stay, Tyler was able to get ready alongside the groom and watch the vows being exchanged before having to jet back to London for training with dance partner Dianne Buswell (pictured)

The wedding was particularly special for Tyler because his entire family were under the same roof for the first time ever.

Tyler grew up with mum Debbie and older brother Lewis, who he says has shaped the man he is today, but the nuptials saw his dad, step mum, and sisters all come together in celebration of the couple’s vows.

He explained: ‘My brother is my idol. He is five years older than me and when we were younger it was just me, him, and my mum growing up.

‘My dad, my step mum and little sisters, were all still close but my brother’s wedding was the first time we’ve all been in the same place, which was amazing.

‘We pushed aside any bitter memories of the past and we just came together to celebrate those special moments.’ 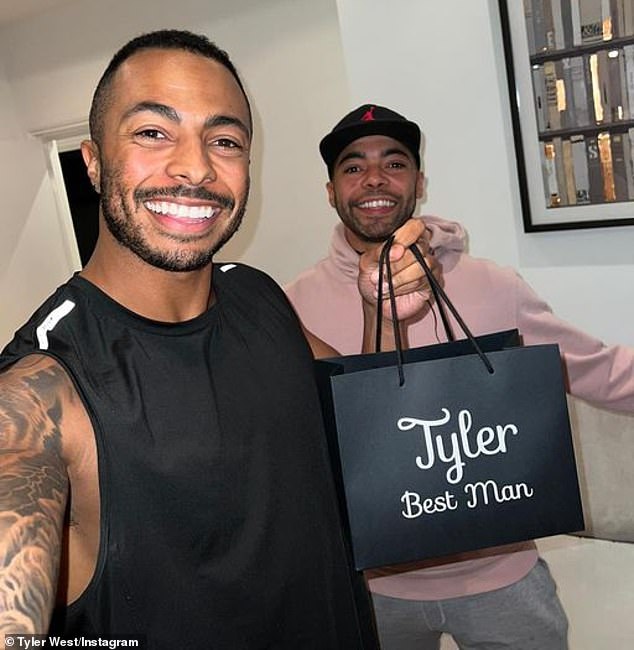 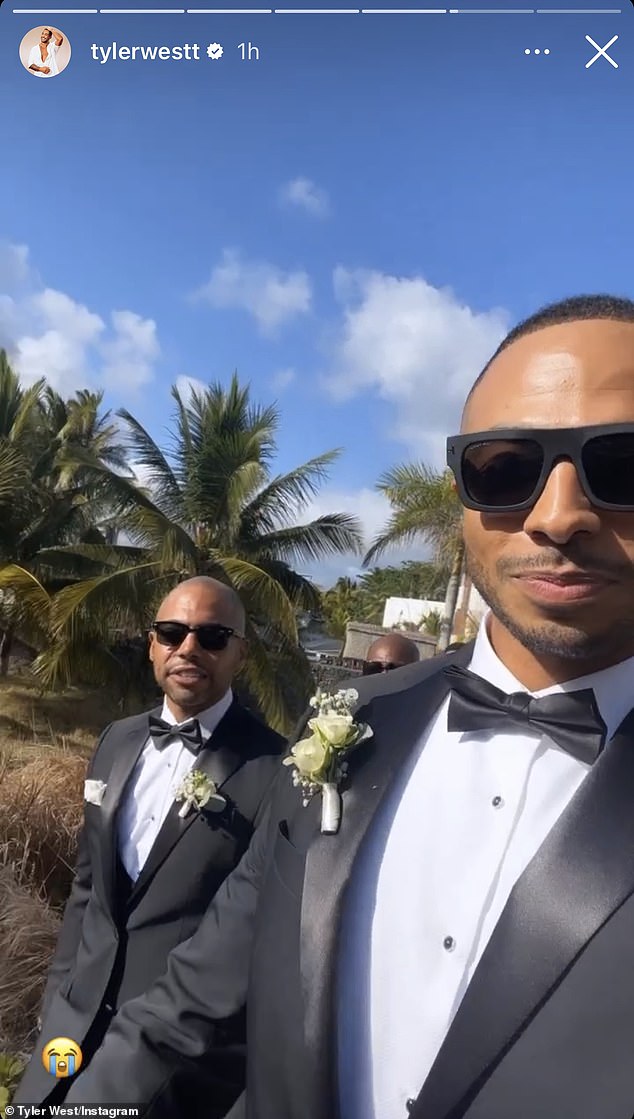 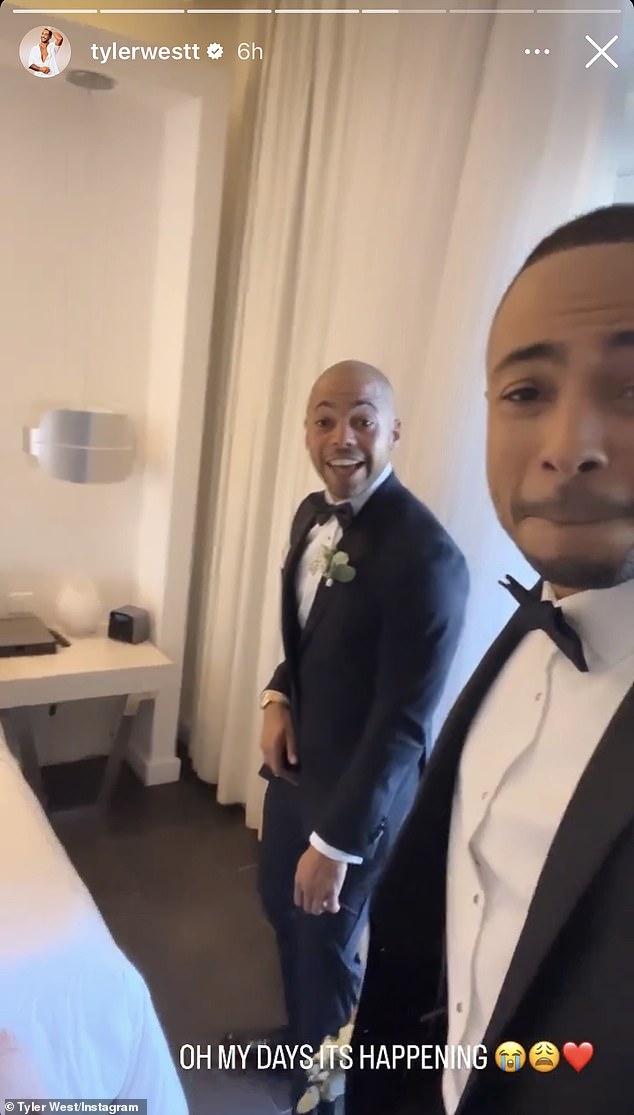 Tyler did his utmost to fulfil his duties as best man – even prerecording his speech, which was played to the wedding party once he was already on his flight home.

But the Strictly star, who topped the leaderboard in week three, is gutted to have missed his brother’s first dance with wife Yasmin after the pair were forced to postpone their overseas wedding amid the Covid-19 pandemic.

He said: ‘My brother’s wedding was a once in a lifetime experience.

‘I reassured him and said I’m going to make it happen, I don’t care how long I have to travel, I will be there for when you say I do – and I was.

‘I have always dreamed about going on Strictly but out of all the weddings to possibly happen this year – it has really pulled on my heartstrings that I have missed the first ever dance with my brother and now my sister-in-law, Yasmin.

‘Coming away from my brother’s wedding I have a new level of motivation, I am so motivated to do the best I can possibly can and leave everything on the dance floor.

‘I’ve got to make up for the first dance I missed at his wedding.’ 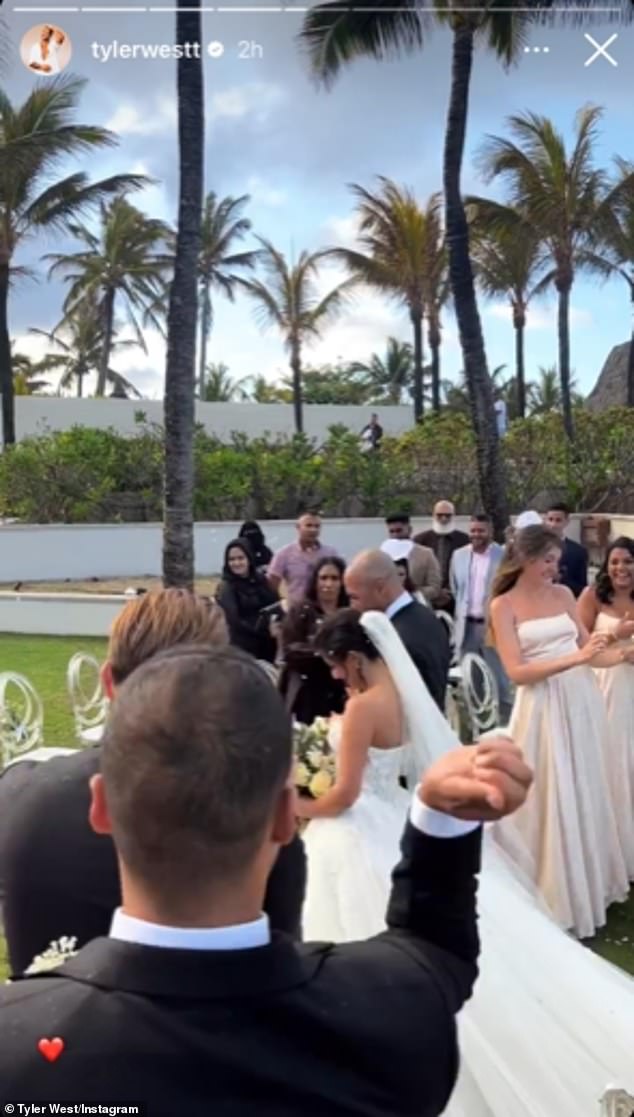 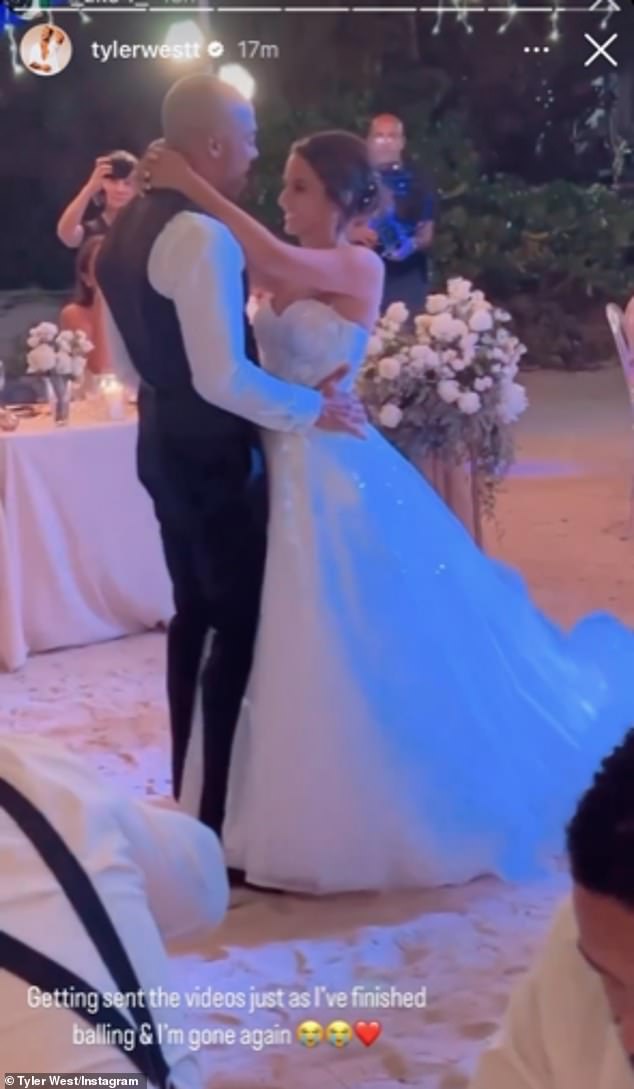 His brother’s wedding in Mauritius isn’t the only commitment Tyler has stuck to while competing on Strictly.

The MTV presenter, who’s dancing the Tango this week to the Doctor Who theme song, ran the London marathon last month – raising thousands of pounds for charity UK Youth.

But he says the level of confidence he’s shown both on and off the dance floor hasn’t always come naturally to him and he came into his own watching brother Lewis, who was a dedicated sportsman, growing up.

Tyler said: ‘As a child I was very nervous and shy – I never spoke at all and my brother would always be my voice. He was the one to hold my hand.

‘He played football for AFC Wimbledon, he played for England basketball – he was this confident guy and I always looked up to him and wished I had that same confidence. Now the irony is, I do.

‘That’s why when I got Strictly, I did have these conversations with them beforehand, and I said I couldn’t miss my brother’s wedding.

‘Family comes first, and you do have a life outside of your work. We’ve always been close, and my brother always been there.’ 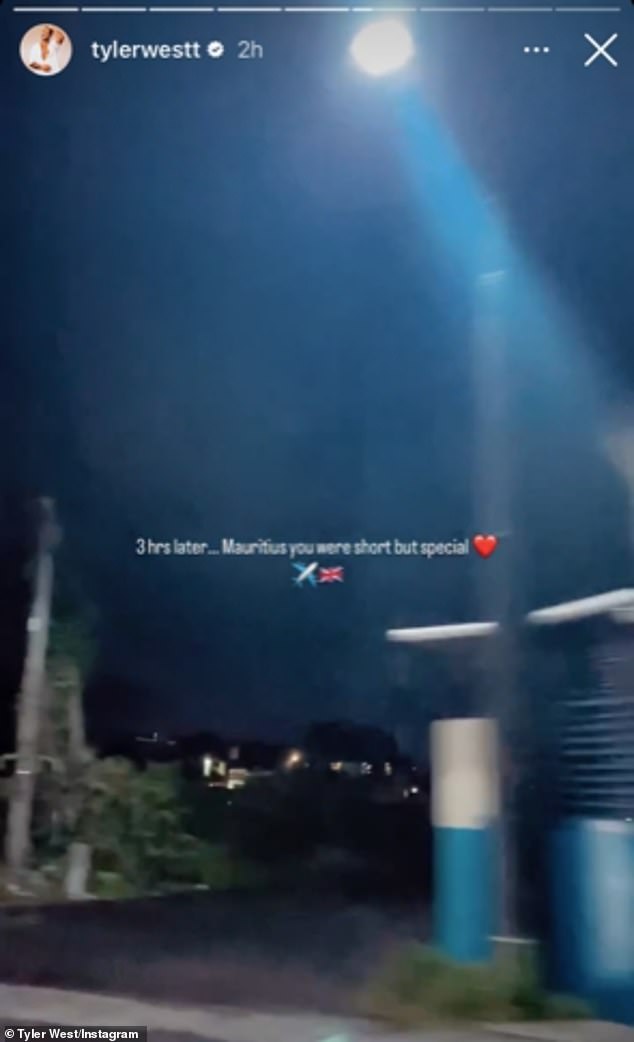