Former Royal Marine JJ Chalmers knows only too well how many people will be studying him on Strictly tonight, watching how his body moves — a body trained for battle not the ballroom.

The judges will be watching his feet and frame, while his ex-military mates (including Prince Harry) will probably be transfixed by the fake tan. His four-year-old daughter Hayley, thrilled by his paso doble cape-waving last week, will be remembering his moves so she can copy them in their Edinburgh kitchen.

But another group will be scrutinising him: the medics who put him back together.

Former Royal Marine JJ Chalmers, pictured with Amy Dowden, was almost killed in 2011 when he was blown up by a roadside bomb in Helmand, Afghanistan 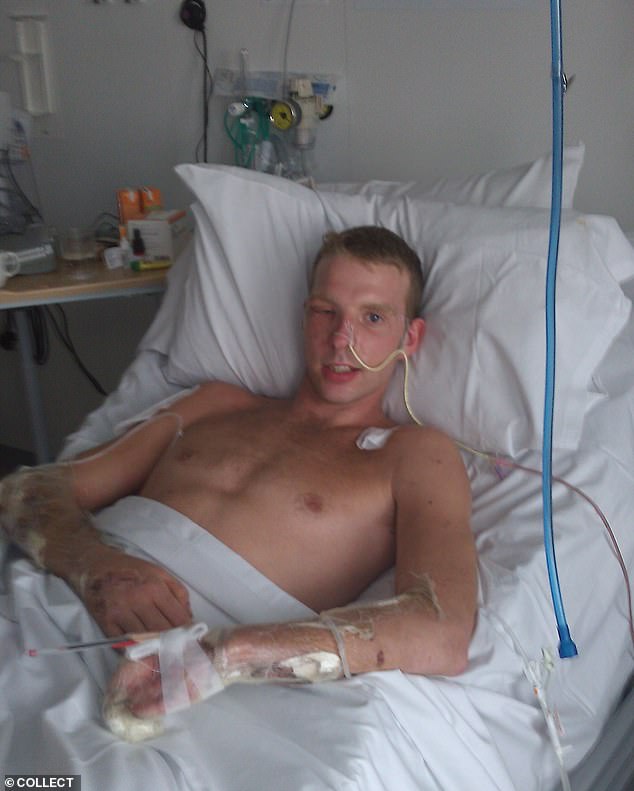 JJ suffered a broken neck, lost two fingers, and almost lost both his arms – with one of his elbows mangled. He also had holes in a leg and suffered a crushed eye socket. Surgeons performed 30 operations over the course of four years

‘They rebuilt this body. There will be things about the steps that aren’t right, but the fact I can do them is down to them,’ says JJ. ‘When you consider what the surgeons did, it’s astonishing we’re even having this conversation.’

For those who aren’t aware of his background, John-James’s military career as a Marines reservist ended in 2011 when he was caught up in a bomb blast in Helmand, Afghanistan, which killed two of his comrades. He was only 23.

The Lance Corporal suffered a broken neck, lost two fingers and both arms were nearly wrenched off, with one elbow mangled. Holes were blown in his leg. He also suffered a crushed eye socket and shattered eardrum.

He went on to have 30 operations over four years. He had to learn how to walk again, dress and feed himself. How to live again.

Even those parts of his body not damaged were affected by the recovery process. In the most gruelling and risky procedure, his shattered arm was sewn temporarily into his abdomen, to increase blood flow — with flesh from his abdomen ‘grafted’ on. The Frankenstein-sounding procedure (he had to ask the doctors to explain it several times) left him looking ‘like the victim of a shark attack’, but it was a small price to pay, he says. 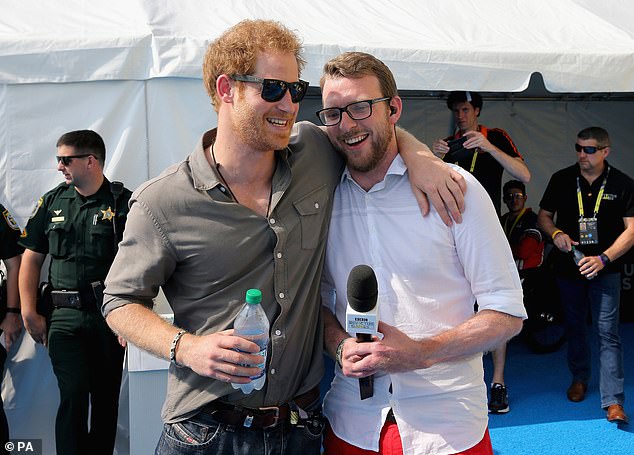 During his recovery, JJ  had to learn how to walk again and got to know Prince Harry, left, due to his involvement with the Duke’s Invictus Games

To quibble about how he’s holding his arms now seems ridiculous, but such is Strictly, and he wouldn’t want it any other way.

There’s another crucial member of Team JJ who will be watching his steps tonight, who deserves a glitterball trophy of her own — wife Kornelia.

She was as much a part of the rebuild operation as the surgeons. Perhaps more so, because she was the one who put him back together mentally and emotionally.

‘I could not have done it without her, no question,’ he says. ‘She dragged me through it all, the surgeries, the rehabilitation. She was just… there. And I needed her there.’

This is the first time the couple have told their inspiring story. While JJ credits dance partner Amy Dowden with being his Sergeant Major on the dance floor (‘yes, she’s quite tough’), it’s Kornelia who has assumed that role in daily life.

She was the one who insisted he must do Strictly. Kornelia is his cheerleader, adviser, mentor, confidante. When he was at death’s door, she acted as his nurse.

And, astonishingly, their relationship was still in the early stages when he was injured.

‘It was one of the things life throws at you,’ she says. ‘I had no idea how to deal with it, but I just knew I had to.’

Their love story is remarkable — and is, she says jokingly, rather unusual in that most love stories don’t involve a catheter.

They both single out the turning point in their relationship as the day they walked along a hospital corridor, him leaning on her, and her holding his catheter bag.

‘There I was, a big strong Marine wanting to impress his girlfriend, having to have her carry the bag,’ JJ says.

‘I wanted to,’ she points out. ‘And the fact that he let me was everything. We were able to laugh about it at the time. I was at the side of him, with this bag of wee clipped to my pocket.’

Ditto the first time JJ took a shower, which he hadn’t been able to do in weeks. When he did, he needed to be supported. At first, he was mortified at the idea of his then girlfriend having to help him with something so intimate.

He let her, though. He’s still letting her. ‘If I’m having a wobble with anything, she’s the one who will get me through it.’ 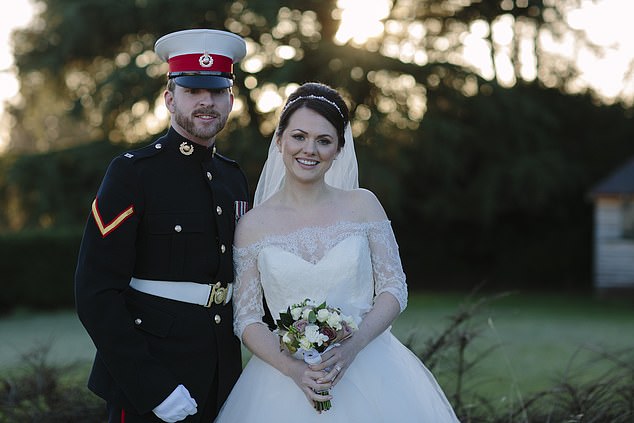 The pair met at university in 2007. JJ, the son of a Church of Scotland minister, was studying to be a teacher. Polish-born Kornelia, doing business studies, was part of his friendship circle, and had begun dating one of his friends.

‘He was seeing someone else, too. But I think I fell in love with him immediately — in a friend way. Everyone loved him. I don’t know how you wouldn’t. He was this smiley, happy, positive person.’

By 2010, they were dating. He graduated and started teaching. Yet there was another passion in his life — the Marine reserves, which he had been in all through university. And one day he sat her down and said he wanted ‘do his bit’, and go to Afghanistan.

‘He said: ‘Statistically, nothing will happen’,’ says Kornelia. ‘And I believed him.’ She knew how important this was to him. ‘He loved the Marines, the camaraderie. I’d never ever have stood in the way of that.’

She had only met his parents once ‘at a barbecue, before we were even going out. We were just friends then’ — but she remembers them all going to wave him off. It was the one and only time she met his friend, Sam Alexander.

‘They didn’t need to worry about me because Sam, the best Marine I’ve ever met, was going to be there,’ says JJ. Sam died instantly in that blast. So, too, did Lieutenant Ollie Augustin.

Both men’s names are often mentioned in the Chalmers house. JJ and Kornelia gave their daughter the middle name Olivia, in memory of Ollie. Their baby son James has Sam as his middle name.

Kornelia says JJ will never get over that loss, and honouring his ‘brothers’ is what drives every decision he makes.

She was visiting a friend when she received the phone call about the explosion. ‘I was only his girlfriend. All the information went to his parents, which was right. His brother called and said they didn’t know how bad it was. He might have lost fingers. I didn’t know what to do.’

The Marines arranged for JJ to be flown back to Birmingham, so Kornelia travelled with his parents to see him there.

‘I will never forget them running through his injuries, to prepare us. I couldn’t do anything but cry. I remember the tears just pouring down my face. His parents went in to see him first. Then I went in with his sister, who is a nurse.

‘He was covered in bandages. There were tubes and wires everywhere, but she was able to explain what they were for. I needed that.

She joined the family in their bedside vigil. When he opened his eyes, JJ was surprised to see her.

‘I was supposed to have returned to Poland for a break after exams and he said: ‘Why are you not in Poland?’. As if I could have gone.’

He remembers mostly seeing her in distress, and feeling guilty at putting her in that position.

‘I could see she’d been torn apart. I realised what I’d done. It’s tricky because you feel selfish, although it isn’t selfish to want to fight for your country’ he says.

‘I was very aware I trained for this. We train to be able to pick ourselves up, deal with whatever. She didn’t. She was just a person who fell in love with the wrong guy.’

Their easy courtship was now over, replaced by hours in the hospital, as he recovered.

He remembers her sitting there just mopping his brow. ‘Endlessly mopping, because it had to be so warm in the room. ‘She was looking after me physically, but it was more than that. There were quite a few operations where I’d wake up and be in a bad place but she was there. I’d think, ‘I’m not on my own. We are going through this together’.’

On the day of his biggest operation — 12 hours of surgery — Kornelia graduated. She travelled to Edinburgh, picked up her degree (‘first class!’ says JJ, proudly) but was back at his bedside by the time he came round.

There would be four years of this, constant travelling, worrying, different hospitals and appointments. Touchingly, he still remembers that in the darkness there were flashes of ‘pure happiness’.

‘They sound almost silly now but there was a lady who came round with cake on Wednesdays — Cath the cake lady. It was the only way we knew it was Wednesday, and it stood out, and I’d feel joy.’

Just two months after the blast, JJ’s older brother David got married in their native Scotland. There was no way he could make the wedding, but was determined to do so via videolink with Kornelia. ‘We had a bottle of champagne. It was the best day.’

This pretty much sums up his attitude — and hers. They are can-do people, seeking sunshine rather than moaning about the rain.

For JJ, does that come from the military training or did he always have it? ‘I don’t know,’ he says. ‘I think to go into the military you have to have that mindset that you will deal with whatever comes at you, otherwise, you’d quit on your first day of training.’

Kornelia encouraged him to get involved with the Invictus Games, and it led to a friendship with Prince Harry. ‘He’s a veteran. He’s a guy who’s seen it, done it, and he understands it in a way lots of other people don’t, says JJ.

‘He’s shaped me, helped me, looked after me, because that’s what veterans do.’ Has he been in touch since Strictly? ‘Yes. I thought he’d find it hilarious, but he thought I was good. He thought, ‘By heck. He can dance’.’

Kornelia also gave JJ a shove when he said he would like to try TV presenting. ‘We were on honeymoon and she just said: ‘Stop talking about it and do it.’ JJ rang pal, TV host and former triple-jumper Jonathan Edwards — that opened a door to a new career.

Now, egged on by Kornelia, it is Strictly. ‘He was considering it but knew that, in the pandemic, I’d be on my own with the kids and it wouldn’t be easy. I said: ‘We’ve been through a lot that isn’t easy’.’

Tonight, JJ will foxtrot through Raindrops Keep Falling On My Head, which includes that famous line about ‘happiness stepping up to greet you’. It’s rather fitting.

I ask when he realised he wanted Kornelia in his life for ever. ‘I just thought, ‘I will always need this woman by my side if I want to achieve anything and be happy’.

‘The way I saw it, if you can be happy in the bad circumstances, then we could be happy for life.’

Even this week, Kornelia has been pushing him on. He called to say he was finding training tough. She told him to get a grip.

‘Sometimes he just needs someone to believe in him, and I’ve always believed in him,’ she says.