Backstage tests, mandatory masks and plenty of blister plasters: Strictly’s stars share a glimpse of filming during the COVID-19 pandemic ahead of dazzling return

The stars of Strictly Come Dancing 2020 have offered fans a behind-the-scenes glimpse of filming as the show finally returns to screens during the COVID-19 pandemic.

In a slew of Instagram posts celebrities including Clara Amfo and Jamie Laing revealed some of the strict measures they have to follow to ensure the BBC mainstay can go ahead, including mandatory visors and regular tests backstage.

Strictly Come Dancing will finally make its return to screens this weekend after being thrown into doubt by the worldwide crisis, with the live audience and judges adhering to strict social distancing guidelines.

Changes: The stars of Strictly Come Dancing have offered fans a behind-the-scenes glimpse of filming during the COVID-19 pandemic, including pro Giovanni Pernice being tested

Contestant Jamie posted a video of pro Giovanni Pernice heading to the medical bay for his regular COVID-19 test.

Clad in the show’s signature sequins, the dancer was in great spirits as the nurse swabbed his nose and mouth.

Jamie did seem to be struggling with the hours of training though, as he revealed a box of Compeed blister plasters to soothe his tired feet. 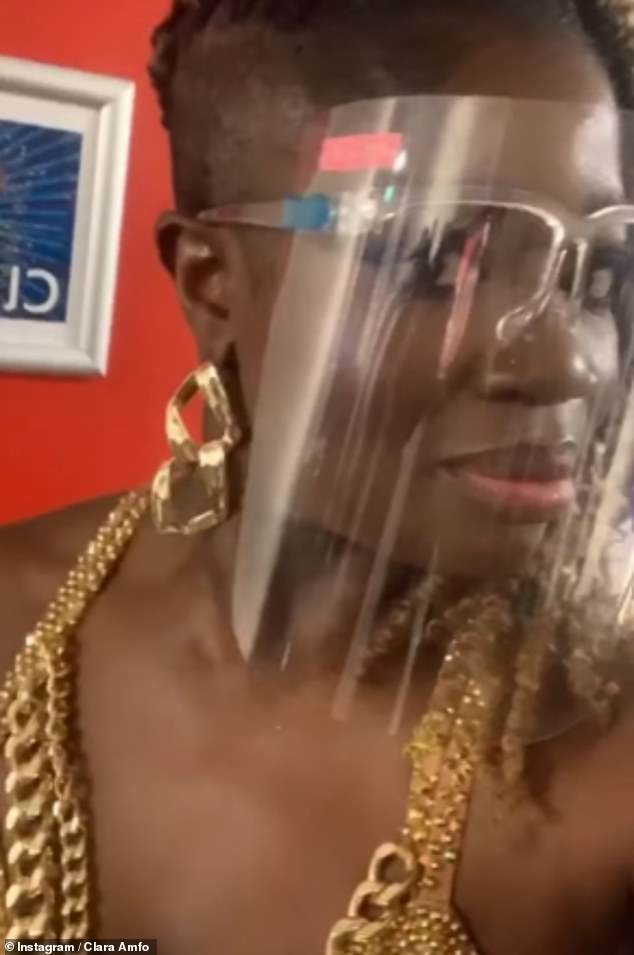 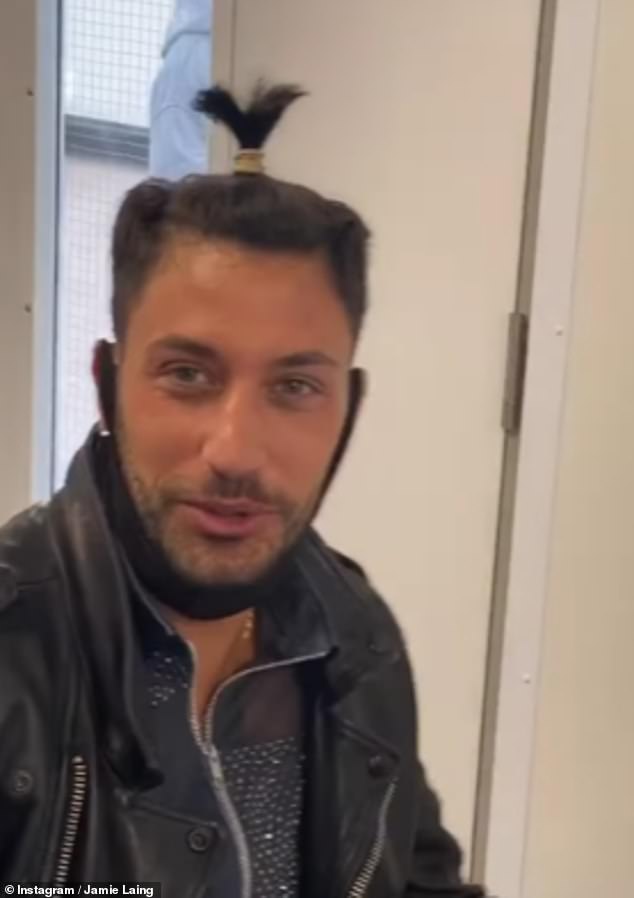 Safety first: Jamie Laing shared a video of pro Giovanni getting a COVID-19 test, as stars and their dance partners are checked regularly to ensure the series is safe and COVID-free

Meanwhile Radio 1 DJ Clara Amfo revealed that stars were tasked with wearing mandatory visors backstage, sharing a fun boomerang to the Kylie Minogue track Can’t Get You Out of My Head.

Gorka Marquez also donned a paper face mask during filming for the pre-recorded launch show, but he struggled to keep the piece on his face.

Karen Hauer also displayed her impressive flexibility as she had her makeup done by one of the show’s crew, herself wearing a face mask and visor. 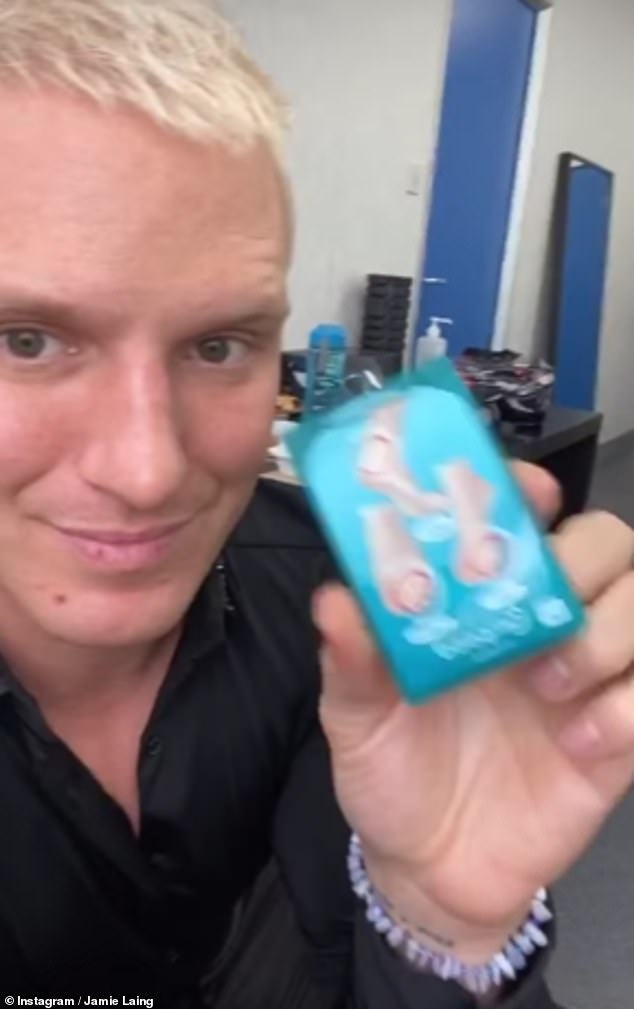 Ouch! Jamie did seem to be struggling with the hours of training though, as he revealed a box of Compeed blister plasters to soothe his tired feet 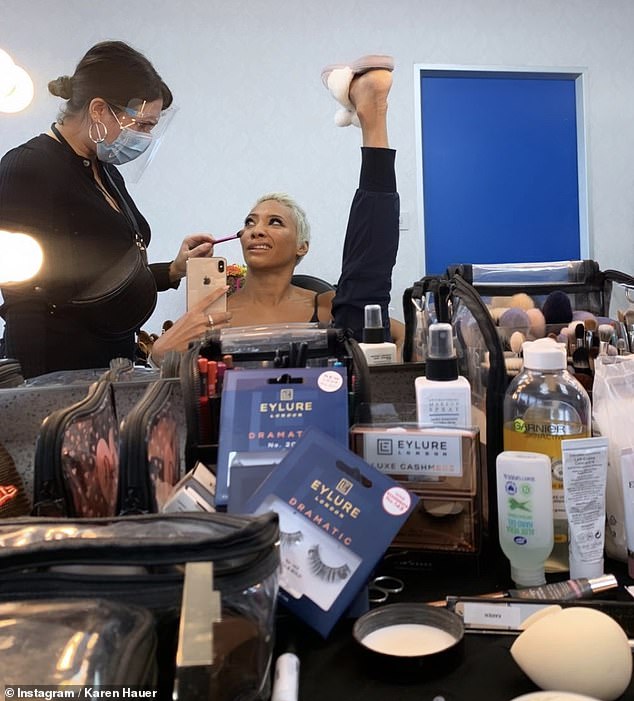 That’s clever! Karen Hauer also displayed her impressive flexibility as she had her makeup done by one of the show’s crew, herself wearing a face mask and visor

This year’s Strictly had been thrown into doubt during the COVID-19 pandemic, given couples would be unable to socially distance during a variety of performances.

The launch show will air on BBC One in just four days time on October 17, while the first live show of a pared-down nine week run will be broadcast on October 24.

This follows the news that stars would potentially be undergoing daily checks for coronavirus after a former crew member tested positive days before the new series. 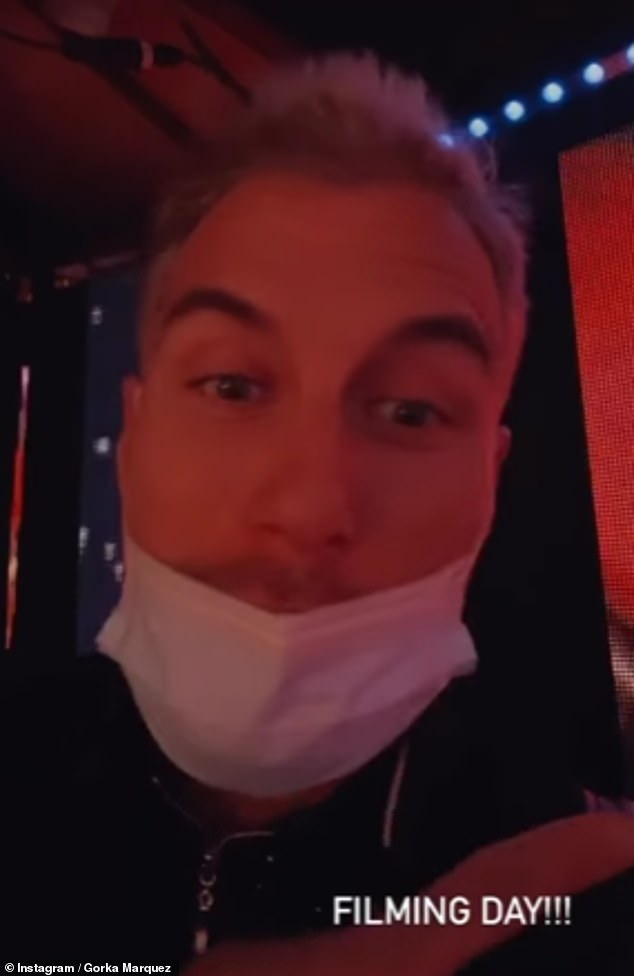 Stay up! Gorka Marquez also donned a paper face mask during filming for the pre-recorded launch show, but he struggled to keep the piece on his face

Meanwhile Bruno Tonioli will be absent from the judging panel due to quarantine restrictions should he travel to the UK from his home in Los Angeles.

However bosses have confirmed he will appear on the show in some capacity, offering his views on this year’s performances during the results show.

Shirley Ballas, Craig Revel Horwood and Motsi Mabuse will continue to judge the show, but will sit socially distanced at separate desks.

Strictly Come Dancing returns on Saturday at 7:50pm on BBC One. 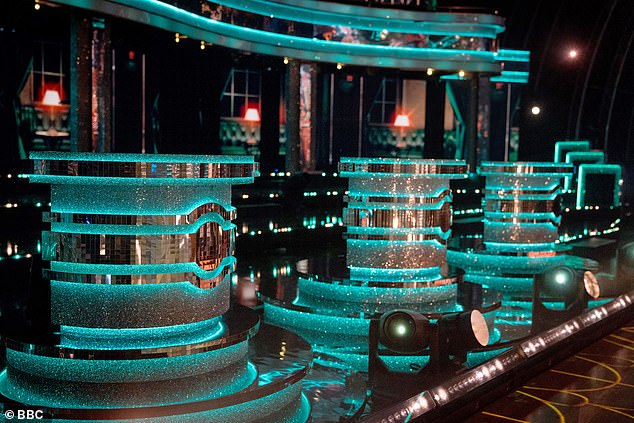 Keeping a distance: This year’s series has seen huge changes due to the COVID-19 crisis, with the judges sitting on separate desks to ensure they’re socially distanced