Stargazers will have the chance to spot the second of four back-to-back supermoons when June’s strawberry full moon lights up the sky tonight.

The spectacular lunar event will see the moon appear up to 17 per cent larger and 30 per cent brighter than usual.

Although it technically peaks today at 12:51 BST (07:51 EDT), the celestial sight won’t be visible until later this evening for those in the UK and North America.

While there is no single definition, the term supermoon generally refers to a full moon that appears brighter and larger than other moons because it is at its closet orbit to Earth.

May’s flower moon was a ‘super blood moon’ because a total lunar eclipse made Earth’s natural satellite appear like a glowing red disk in the sky, while the full moons on July 13 and August 11 are also likely to be classed as supermoons.

Some parts of the scientific community, including NASA, use the supermoon definition set by astrologer Richard Nolle in 1979, who classed it as a full moon that comes within 90 per cent of its perigee — the closest point to Earth in its orbit.

Look up! Stargazers will have the chance to spot what is likely to be the second of four back-to-back supermoons when June’s strawberry full moon lights up the sky tonight (Last year’s strawberry moon is pictured)

HOW TO SNAP A SHOT OF THE STRAWBERRY SUPERMOON

The Royal Observatory in Greenwich has issued guidance on how to capture the best images of June’s Strawberry supermoon.

It said that whether you’re using a DSLR camera (digital single-lens reflex), compact camera or a phone, you can take stunning pictures of the lunar satellite.

To improve your chances of capturing a good shot, make sure to choose a location that allows an unobstructed view of the moon.

To prevent camera shake, mount your device on a tripod.

If you have the option to adjust your device’s settings and want to focus just on the moon, make sure to use a telephoto lens – a long lens that enables you to capture objects that are far away.

Set your ISO settings to a low level (usually around 100) to reduce noise in the picture.

Aim for a shutter speed of around 1/30th of a second as the moon moves relatively quickly across the sky.

However, retired NASA astrophysicist Fred Espenak calculates supermoons to account for changes in the lunar orbit each lunar cycle.

Under his definition, May’s full moon was a supermoon, while NASA did not classify it as such.

June’s full moon will be 222,238.4 miles (357,658 km) from our planet when it rises at dusk, with skywatchers told to look in a southeasterly direction after sunset to see it creep up over the horizon.

Cloud cover across much of England and Wales should be minimal this evening, although people in Ireland and Scotland could have their view obscured.

If bad weather clouds your night sky, you can still watch the Strawberry supermoon live online via a free webcast from the Virtual Telescope Project, beginning at 20:15 BST (15:15 EDT).

The Royal Observatory in Greenwich is encouraging people to submit their photos of the supermoon to win a ‘brilliant astronomy prize’.

‘The good news is that the Super Strawberry Moon will still appear full for a few days in and around 14 June, so there will be plenty of chances to capture that all-important shot,’ it said.

‘Due to optical illusion, the moon often appears much larger when it’s near the horizon, so for a really dramatic photograph look for the moon just after moonrise or before moonset.’

June’s moon gets its name from it being strawberry season, when the berries are ripe for picking.

The Farmer’s Almanac also notes that this specific full moon has had a number of names in the past, all linked to the natural world, including blooming moon. 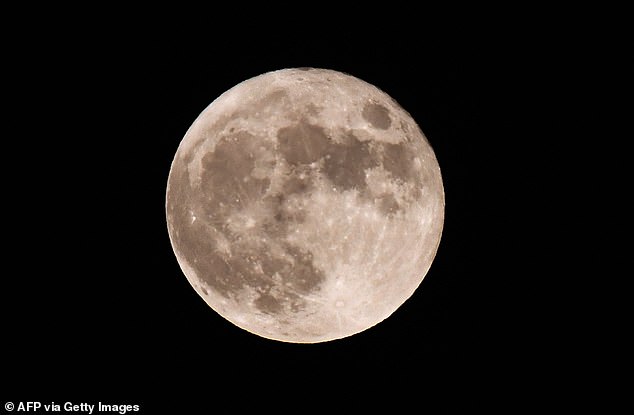 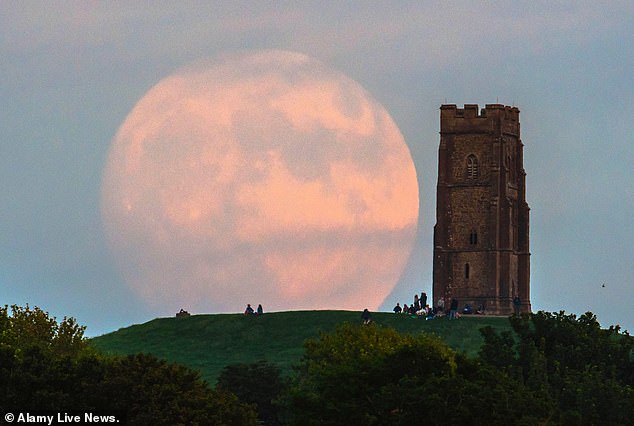 The phrase ‘honeymoon’ may be tied to this full moon, possibly due to the tradition of marrying in June or because the ‘honey moon’ is the ‘sweetest’ moon of the year.

TV presenter, author and world-class astronomer Mark Thompson has previously said that a supermoon is a great opportunity to look for features on the lunar surface.

‘The ease with which the full moon can be spotted makes it a great object for kids and newcomers to stargazing,’ he added.

‘See how many craters you can spot or if you can locate the Sea of Tranquillity where Neil Armstrong and Edwin “Buzz” Aldrin landed in 1969.’

Taking photographs of the moon can be a challenge, explained Thompson, who said people are often inspired to capture their own picture but just see a tiny white blob.

‘To successfully capture lunar close-ups, a long lens is a must,’ he said. ‘Aspiring photographers should check out these expert tips from Canon for more advice.’

FULL MOON NAMES AND THEIR MEANINGS

January: Wolf Moon because wolves were heard more often at this time.

April: Pink Moon as it heralded the appearance of Phlox subulata or moss pink – one of spring’s first flowers.

May: Flower Moon because of the abundance of blossoms.

June: Strawberry Moon because it appeared when the strawberry harvest first took place.

July: Buck Moon as it arrived when a male deer’s antlers were in full growth mode.

August: Sturgeon Moon after the large fish that was easily caught at this time.

September: Corn Moon because this was the time to harvest corn.

October: Hunter’s Moon after the time to hunt in preparation for winter.

November: Beaver Moon because it was the time to set up beaver traps.

December: Cold Moon because nights at this time of year were the longest.