STRAIT TALKIN’: The scramble for seats resembles a cheese-rolling contest… while the expected rain failed to materialise as Team USA got off to a bright start

The scramble for places around the first tee when gates opened at 6am had to be seen to be believed. Desperate for a space in the 3,000-capacity stand, hundreds — who had queued for hours — diverted from the course path and headed up a grass bank in an attempted shortcut to beat those in front of them.

In a frantic scene similar to the Cooper’s Hill cheese-rolling contest, dozens went sprawling on the slippery downslope.

One man, in a pair of sky-blue trousers, ended up covered in mud and without a shoe. However, the outcome was worse for a woman who went to the ground and suffered a suspected broken ankle. She was on the turf for 15 minutes receiving medical attention.

There was a mad scramble to get to the 3,000 capacity grandstand at the first tee 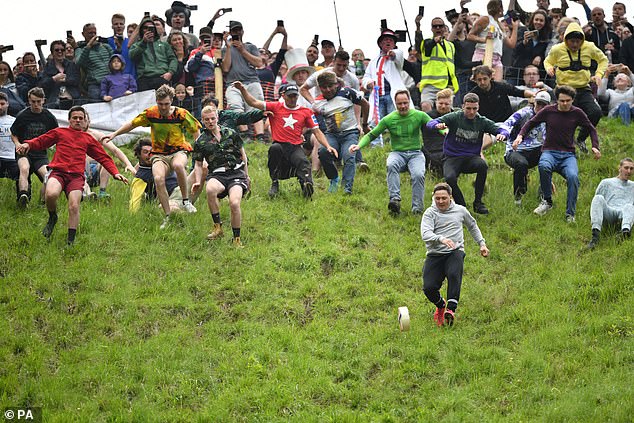 Sky have taken around half of their normal crew to Wisconsin because of Covid restrictions and difficulty getting here.

The broadcaster have been helped by the presence of hosts NBC, who are also owned by Comcast.

Recycling appears to be a dirty word at Whistling Straits with frightening amounts of plastic on display.

There are no recycling bins to be seen and in the giant megastore any purchase — regardless of size — comes wrapped in a giant plastic bag.

Elsewhere, the press are ferried from their hotel by bus to a car park about 100 metres from the media centre.

However, they are forbidden from walking the short distance and instead placed on to another shuttle bus for a journey lasting the grand total of one minute. 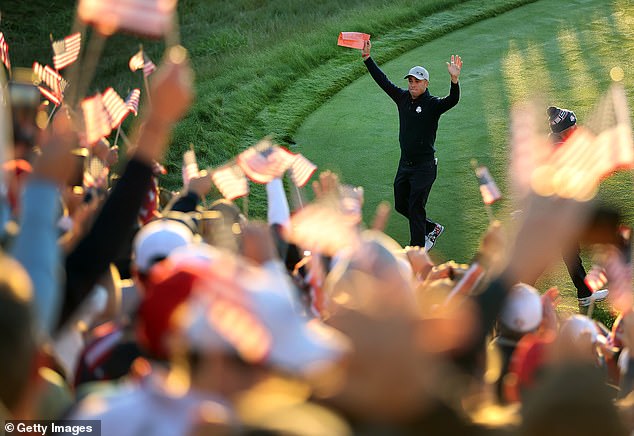 The hoodie is going nowhere, with the likes of Brooks Koepka sporting the much-talked-about garment on a chilly first morning.

Gilets and collared jerseys were also on display with the Americans admittedly looking smarter in their predominantly navy and white uniforms than the light blue and yellow worn by the Europeans.

A chilly 9°C greeted the players on the first tee, although by the time the later groups went out the mercury had risen to 23.

The forecast rain and wind did not materialise on a near-perfect first day. Saturday promises to be a little colder but again dry, with highs of 18, while Sunday looks like another belter, with sunny highs of 23 predicted. 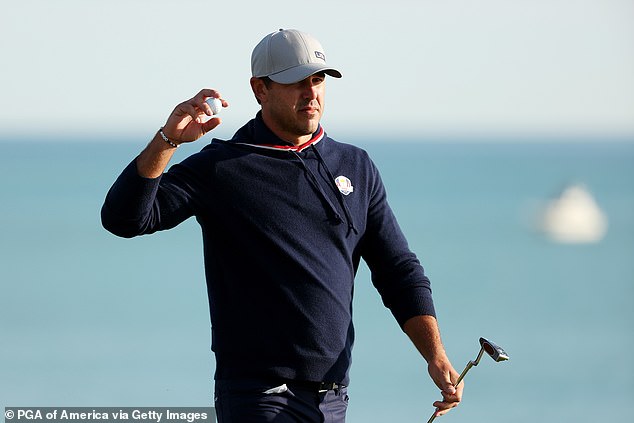 KEY MOMENTS FROM THE FIRST SESSION

1.05pm (UK): Sergio Garcia opens the 43rd Ryder Cup with a poor shot — the ball disappears into a bunker on the left. Justin Thomas responds by hitting a perfect drive down the middle but the 28-year-old ends up missing a simple putt and the hole is halved.

2.01pm: Jon Rahm sinks a sensational putt from almost 60 feet on the fourth hole to clinch a birdie and put him and Garcia one up against Thomas and Jordan Spieth. The European pair will not be behind from this point onwards.

3.16pm: After Thomas misses a six-foot putt to win the ninth hole, brilliant play from Spanish duo Rahm and Garcia sees the European duo go three up on the 10th.

3.34pm: Brooks Koepka misses a five-foot putt and Europe’s pair of Lee Westwood and Matthew Fitzpatrick take the ninth hole to bring their match against Koepka and Daniel Berger to all square.

3.50pm: Dustin Johnson and Collin Morikawa birdie the 11th to go two up against Paul Casey and Viktor Hovland.

4.50pm: After finding himself in the rough on the 17th, Spieth superbly chips the ball back on to the green at an almost vertical angle. Stepping off the bank, the whiplash effect sends him running backwards and he struggles to stop his momentum before almost ending up in Lake Michigan! However, Thomas misses the simple putt that follows and Europe claim the first point of the contest.

4.53pm: Westwood has a 10-foot putt to win the 15th hole and take him and Fitzpatrick to just one down but he misses and Europe can only halve the hole so they remain two down with three to go.

5.01pm: Morikawa seals the 16th hole to see him and Johnson beat Casey and Hovland. It earns the USA their first point.

5.14pm: Poulter misses a long birdie putt and the USA pairing of Cantlay and Schauffele take the point in that match. USA go 2-1 up.

5.22pm: Westwood misses a putt to take his and Fitzpatrick’s match to the final hole, so to the home spectators’ delight, the USA finish the foursomes 3-1 up.