Storm Dennis has exploded into a bomb cyclone as meteorologists dub it one of the worst North Atlantic storms ever recorded.

This will come as a second blow to flood-ravaged communities still recovering from damage caused by heavy rainfall and 80mph winds brought by Storm Ciara last week.

Last week’s storm – likely the biggest in the century – claimed three victims after a falling tree killed a 58-year-old Mercedes driver, a 77-year-old man fell over and banged his head on ice and a falling branch killed a dog walker in his sixties.

And now, 1,200-mile wide ‘Dennis the Menace’ – which will bring 60mph winds and 100mm of rain in some areas – is to cause mayhem for towns in Yorkshire’s Calder Valley, which was inundated with floodwater when Storm Ciara raged.

Storm Dennis has exploded into a bomb cyclone as meteorologists dub it one of the worst North Atlantic storms ever recorded. Yesterday in Mytholmroyd, West Yorkshire, officials were seen desperately trying to prepare for Storm Dennis by using sandbags as flood defences 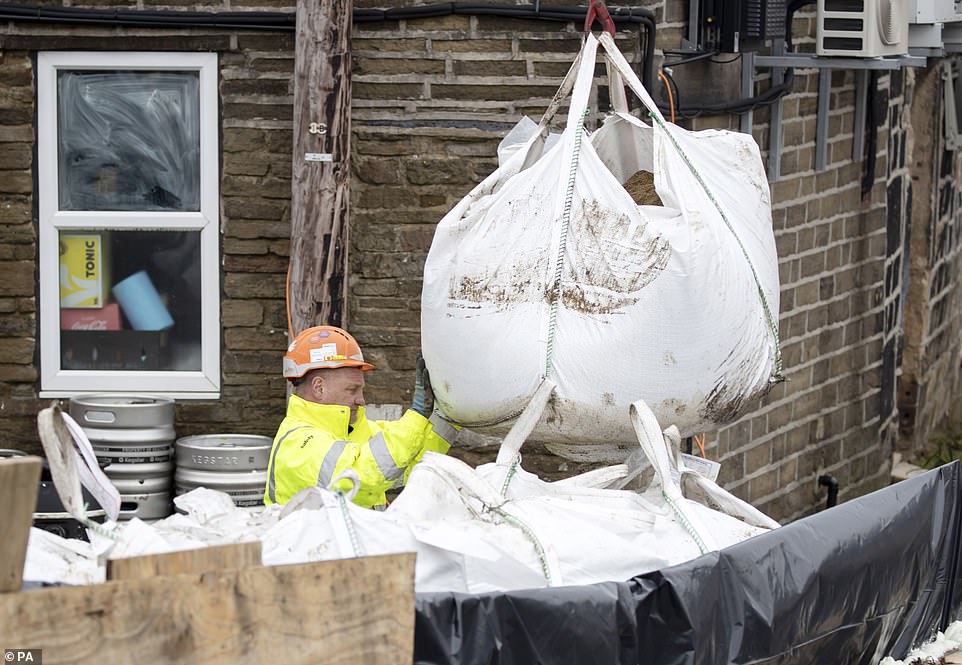 Workers in the Calder Valley towns of West Yorkshire (pictured today) are already trying to recover from the devastating effects of Storm Ciara, but are using sandbags to prevent further damage to the area with Storm Dennis looming tomorrow 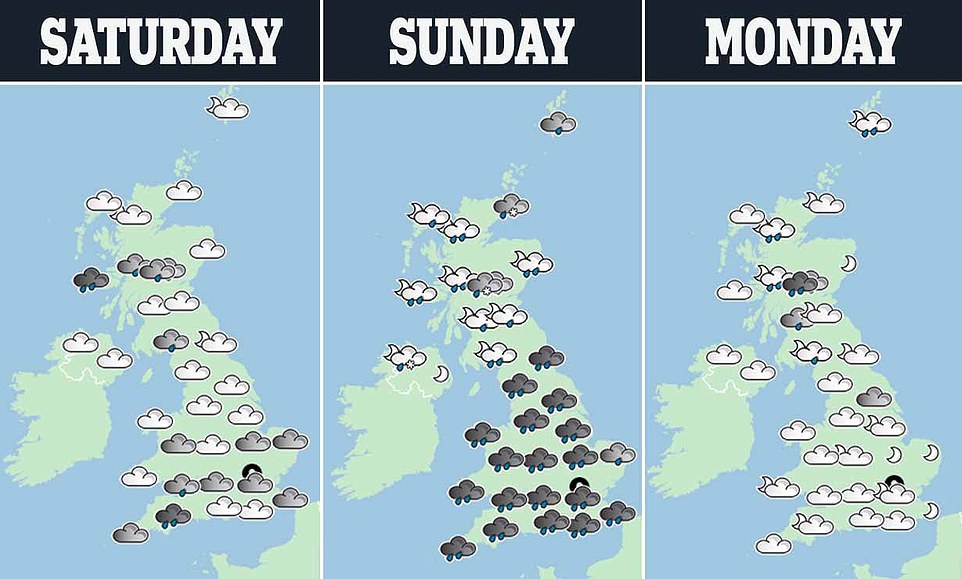 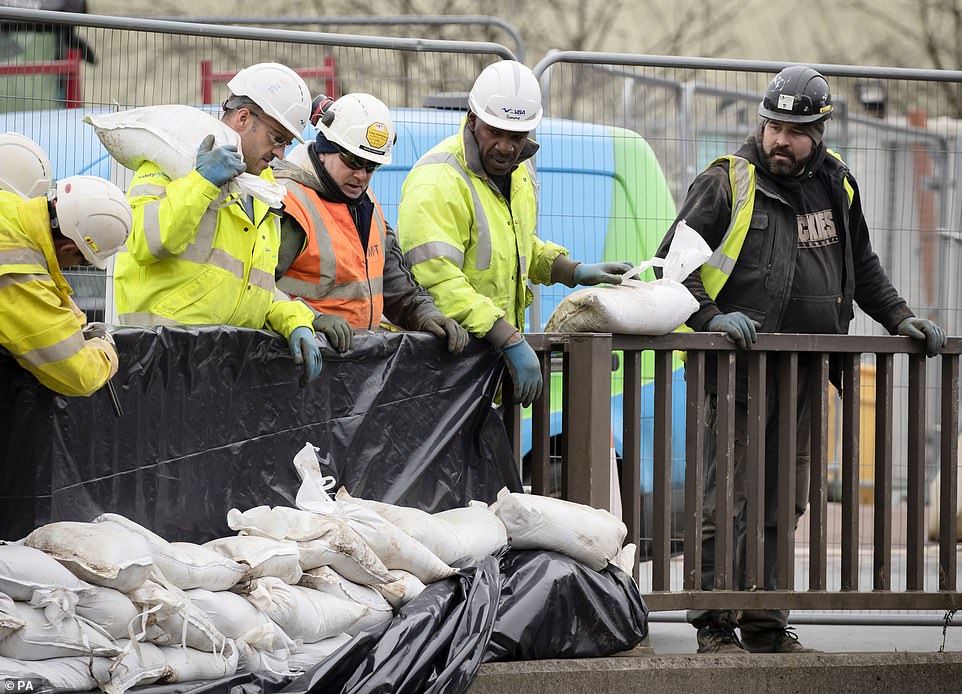 The 1,200-mile wide storm will bring mayhem for towns in Yorkshire’s Calder Valley, which was inundated with floodwater on Sunday 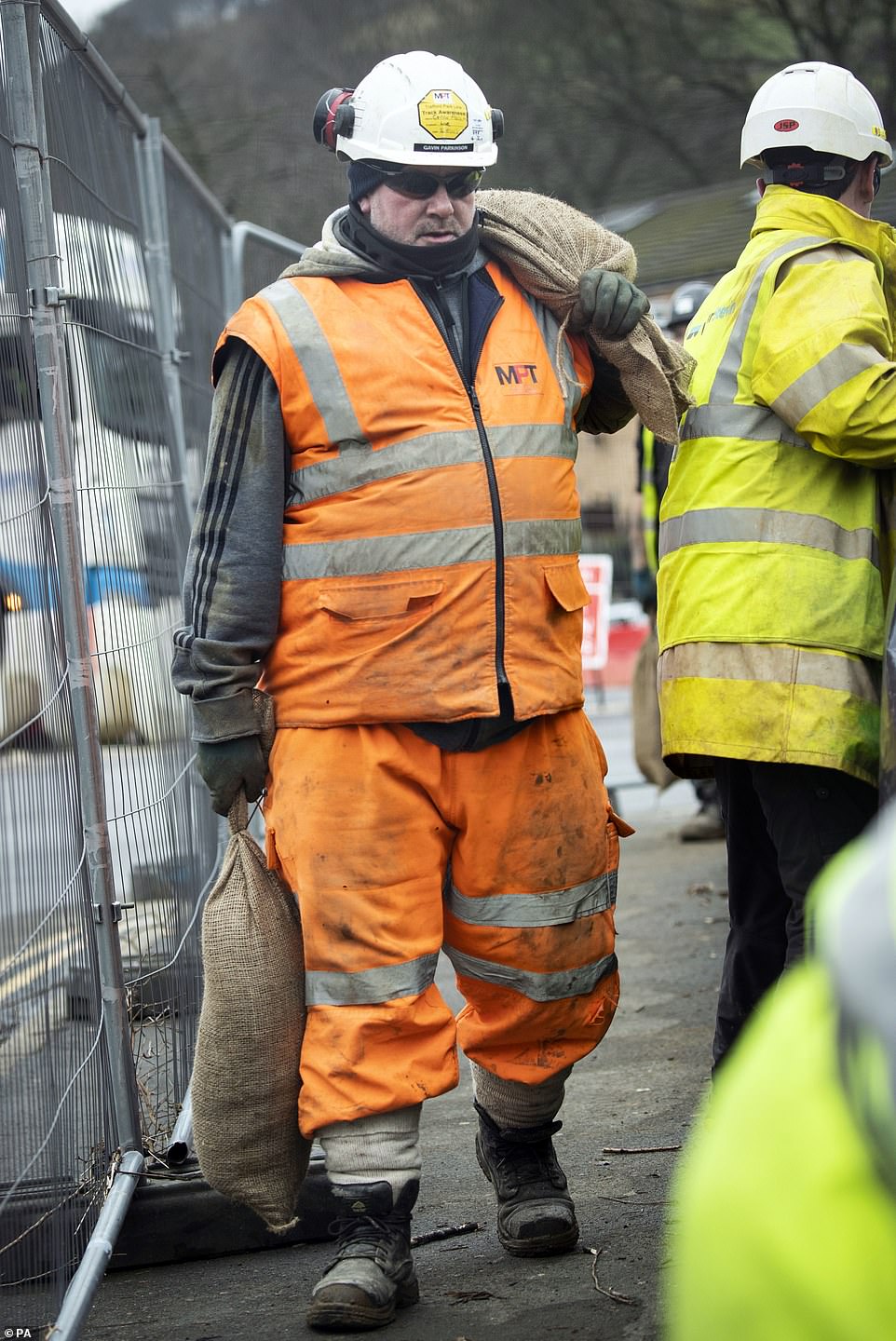 What are ‘bomb cyclones’ and how do they happen?

A ‘bomb cyclone’ – also known as explosive cyclogenesis or a weather bomb – is caused by a steep drop in air pressure within a storm.

It usually creates winds of 74-95mph.

For a bomb cyclone to begin, air pressure must drop by 24 millibars within 24 hours – which means a rapid shift from good weather to bad.

This process is sometimes called ‘bombogenesis’ or ‘weather bomb’.

The phenomenon got its name due to the dramatic drop in pressure being similar to a bomb exploding.

It all starts with a cyclone, a rising column of air that spins around.

A vacuum effect is created when the air gets higher, causing the pressure to drop.

The Environmental Agency have warned that due to the water-soaked ground left over by Storm Ciara, the latest flooding is expected to be worse what has been seen so far, the BBC reports.

Storm Dennis became a ‘bomb cyclone’ on Thursday, when air pressure dropped by 24 millibars within 24 hours.

Remarkably, this is over two times the drop necessary to give the phenomenon its extreme name.

‘An easier way to think of it is, it’s a low pressure weather system that drops really quickly.’

While Iceland, will feel the brunt of the storm – that could potentially be one of the worst North Atlantic storms on record – the UK will be lashed by high winds and intense rainfall.

Meteorologist Tony Zartman told Accuweather: ‘The highest rainfall totals will likely concentrate across Scotland, Wales, Denmark and Norway, which is typical with a windstorm taking this track.’

The Met Office raised the alert to amber for Dartmoor and south Devon, most of Wales, the Pennines and large swathes of Yorkshire – where up to 5.5 inches of rain is expected to fall. 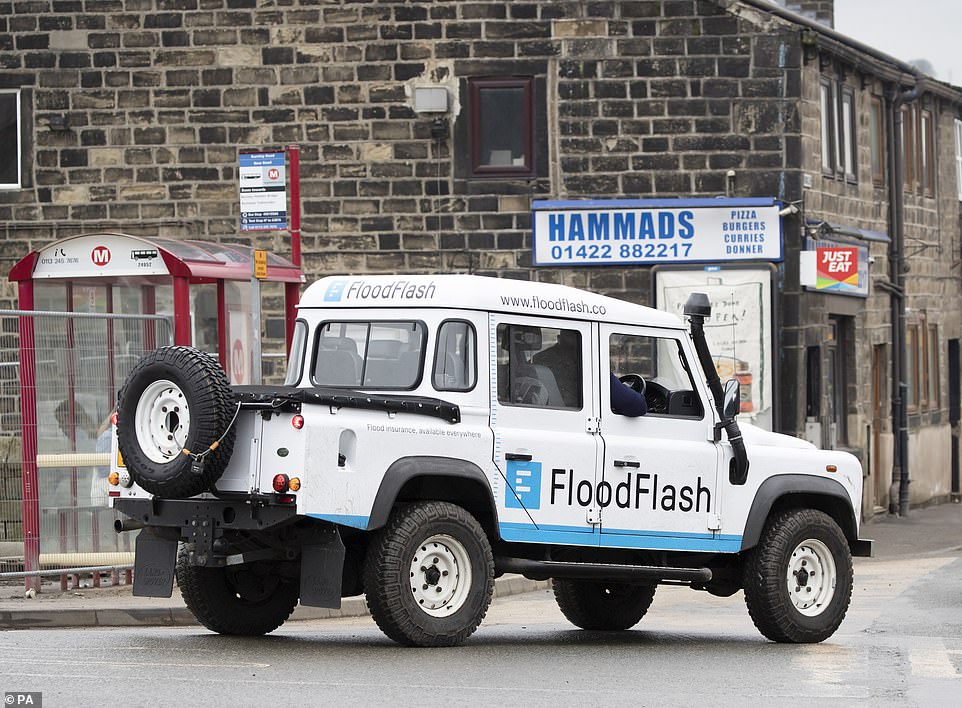 The amber warning area includes towns in West Yorkshire where hundreds of homes were flooded after Storm Ciara brought more than a month’s rain last weekend.

In York, where the Ouse peaked at more than 14ft on Tuesday, river levels remained high at nearly 11ft yesterday.

‘Homes and businesses are likely to be flooded.

Storm Dennis is likely to cause gusts of up to 50mph around the country until midday tomorrow, rising to 70mph in southern and western coastal areas.

But last night rail firms had not warned passengers not to travel – unlike during Storm Ciara, which brought gales of up to 97mph.

The amber warning is in place from noon today until 3pm tomorrow and a wider yellow weather warning for heavy rain is in place until 9pm. 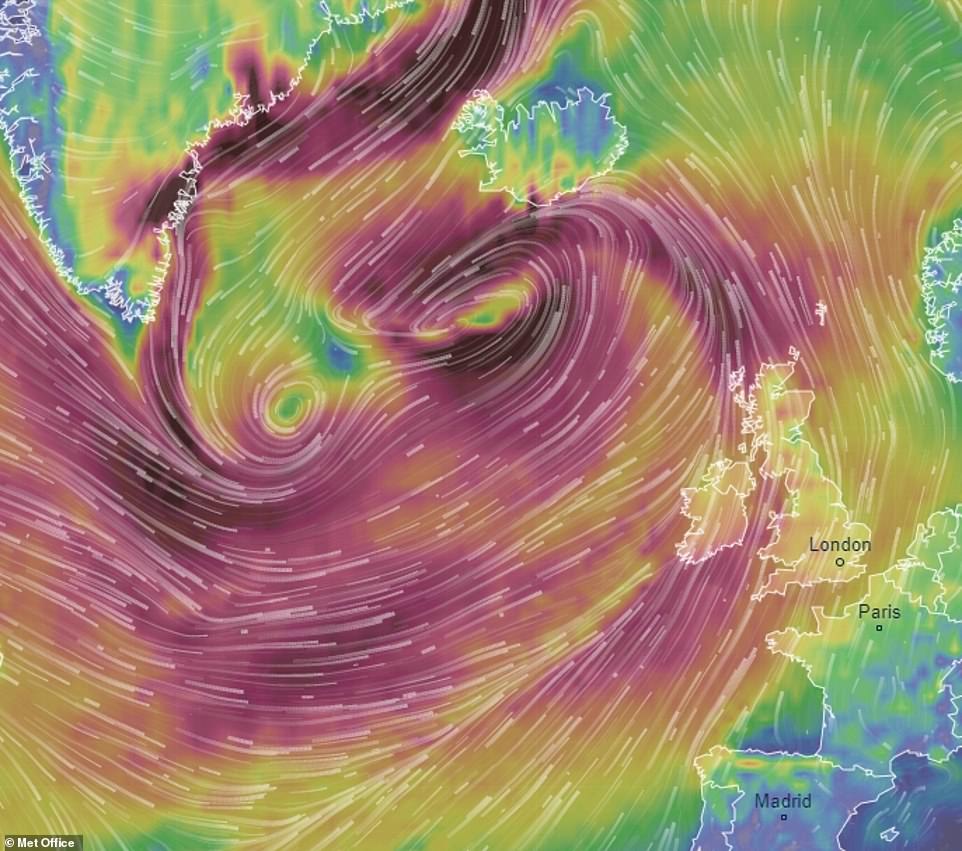 Storm Dennis is likely to cause gusts of up to 50mph around the country until midday tomorrow, rising to 70mph in southern and western coastal areas 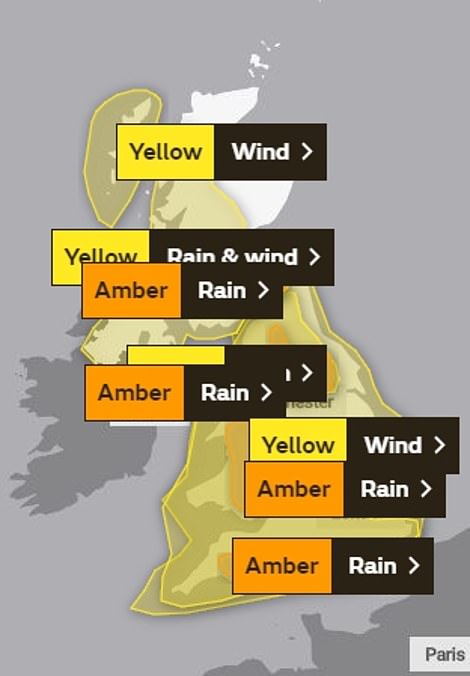 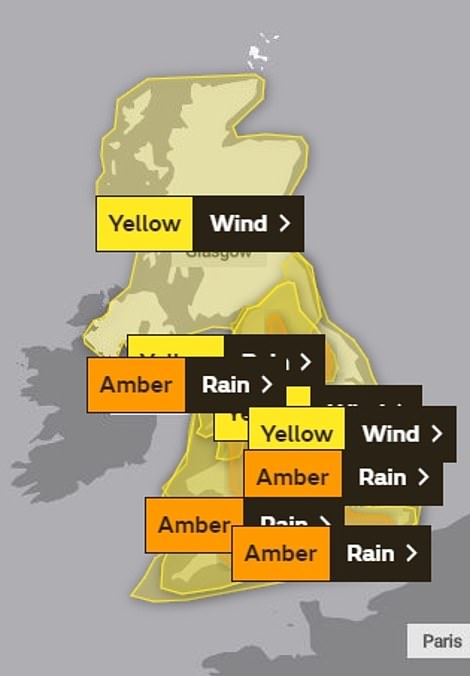 The Met Office raised the alert to amber for Saturday (left) and Sunday (right) across Dartmoor and south Devon, most of Wales, the Pennines and large swathes of Yorkshire – where up to 5.5 inches of rain is expected to fall

This covers southern England, the North West, Wales, Cumbria and the Pennines, with up to two inches of rain forecast.

Storm Dennis will also bring mild temperatures of up to 14C (57F) in southern England this weekend, before returning to cold and blustery weather next week.

Steven Willington, of the Met Office, said: ‘There is a risk of significant impacts from flooding, including damage to property and danger to life from fast flowing floodwater.’

Green Flag are expecting a staggering 55,000 callouts over the weekend and 223,800 breakdowns over the half-term period.

Yesterday in Mytholmroyd, officials were seen desperately trying to prepare for the fourth named storm of the year by using constructing flood defences made of sandbags to prevent further damage.

The Environment Agency said the flood impact from the weather system is likely to be worse than last weekend’s Storm Ciara due to rain falling on already saturated ground.

John Curtin, the agency’s executive director of flood and coastal risk management, said Cumbria, Lancashire and Yorkshire were the areas he was most ‘concerned’ about.

‘This [storm] could be a step up from what we have seen before,’ Mr Curtin said.

‘We had a big storm last weekend, [we now have] saturated catchments, snowmelt and rainfall, so it is a perfect storm.’