The scale of devastation wrought upon a French town that was hit by torrential flooding caused by Storm Alex has been laid bare in new aerial images.

Saint-Martin-Vestubie, 25 miles north of Nice and near the border with Italy, was at the centre of a downpour at the weekend that saw three months’ worth of rain fall in just a few hours.

Images from Saint-Martin-Vestubie, where two people have been confirmed dead, show how one house was ripped in half by torrents of water, with its foundations completely washed away.

Meanwhile satellite images revealed how much of the outskirts of the town have been washed away, along with fields, trees, bridges and roads, leaving little more than rubble behind.

The combined death toll in France and Italy now stands at eight, with a further eight missing feared dead in France, and 13 more whose whereabouts are unknown.

The scale of devastation caused by a freak storm that dumped three months’ worth of rain on the Maritime Alps has been revealed in images from the French town of Saint-Martin-Vestubie, which bore the brunt of the onslaught 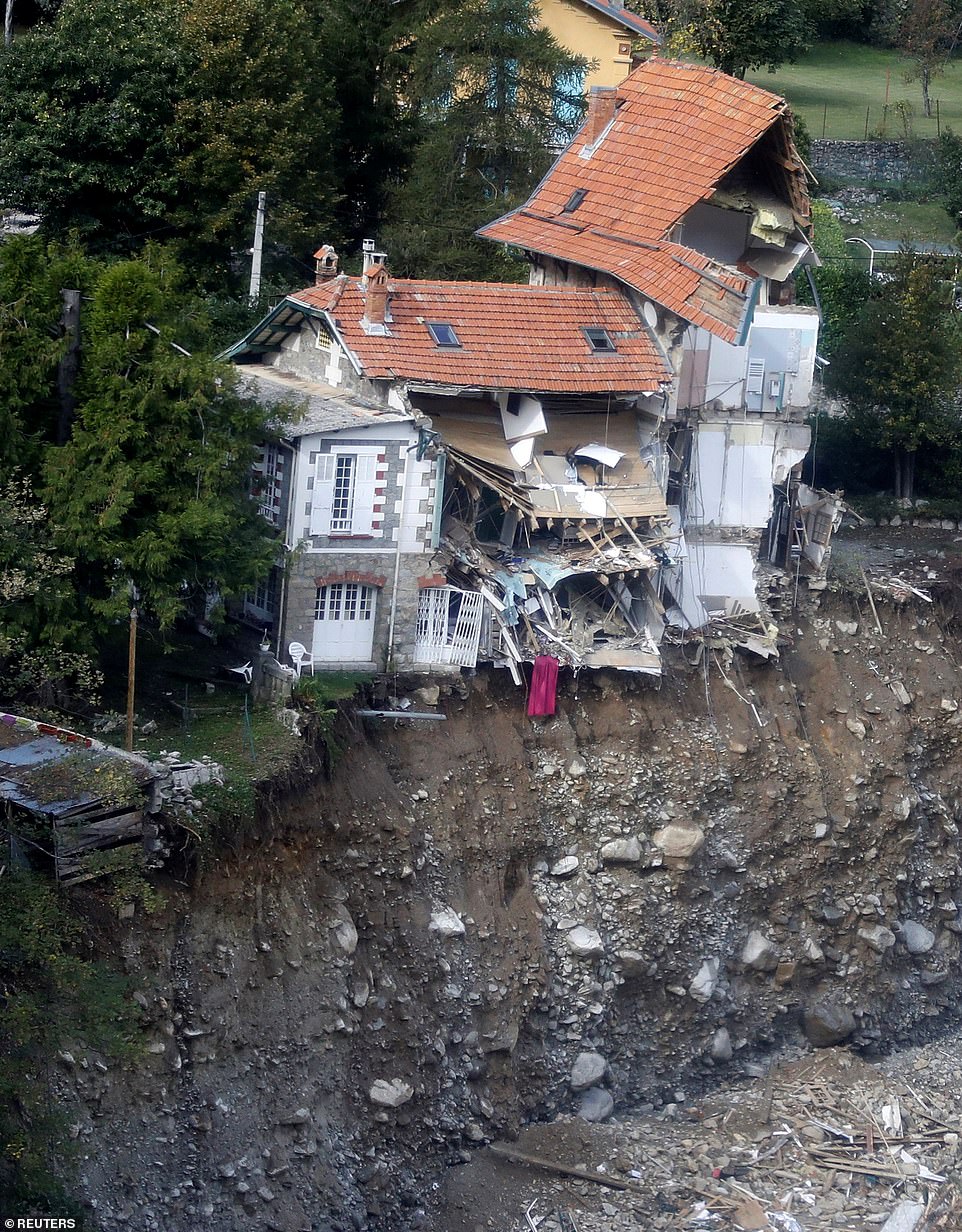 Roads were turned into raging torrents as floodwaters flowed down the mountains, sweeping away everything in their path – including half of this house in Saint-Martin-Vestubie, and the road outside 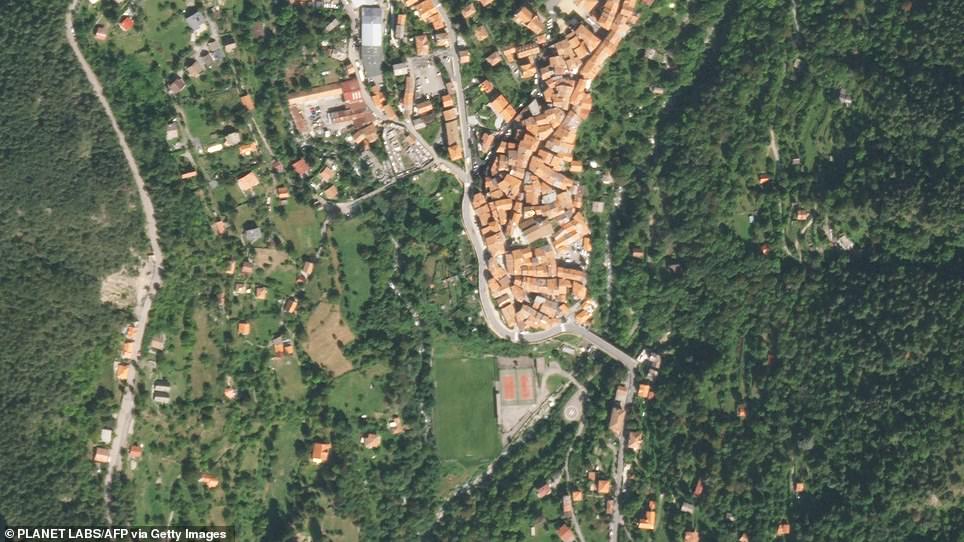 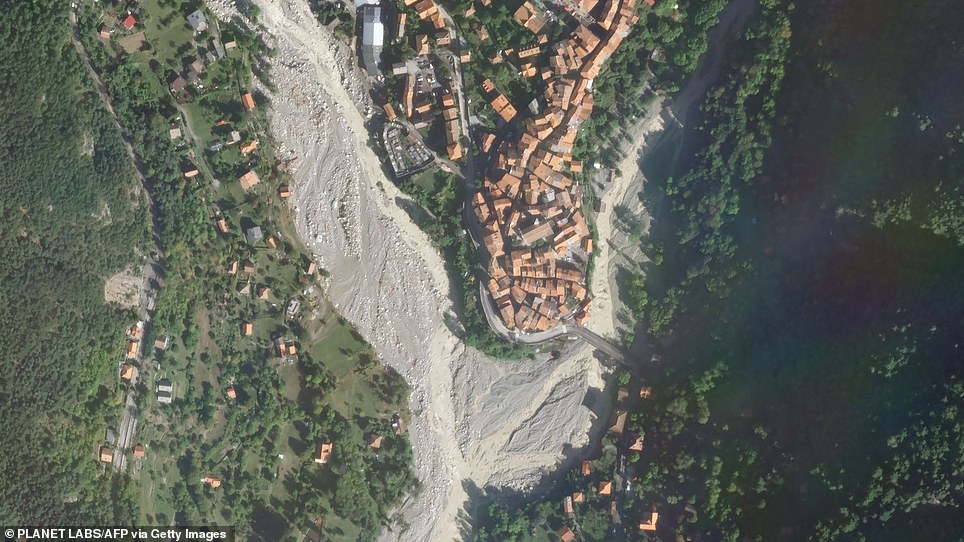 Before and after images of Saint-Martin-Vestubie reveal how much of the outskirts of the town were washed away by the floodwaters, with buildings, fields and roads swept down the mountainside 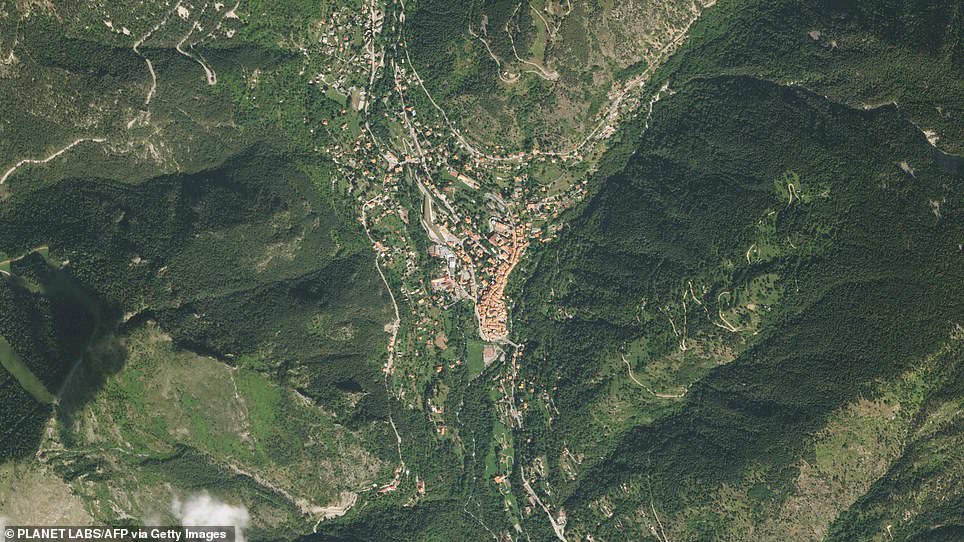 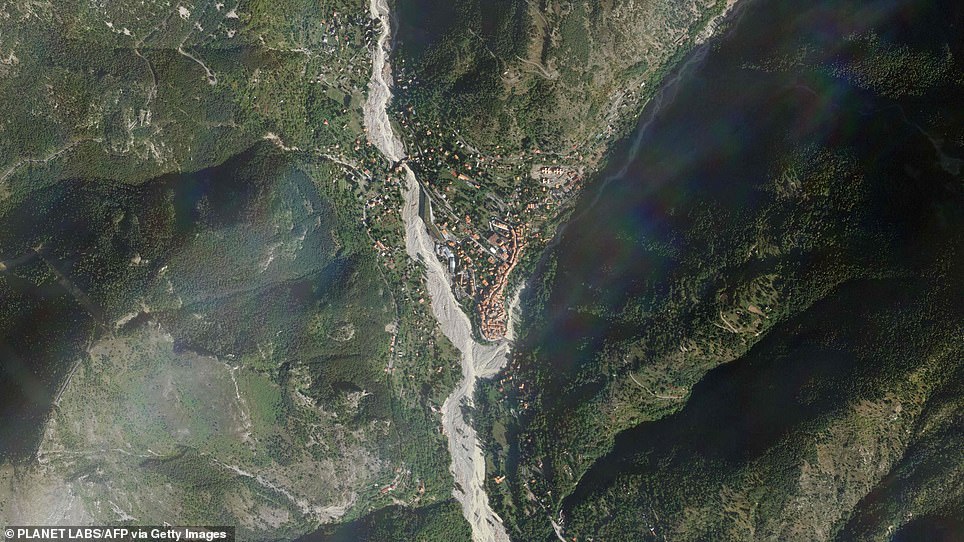 Before and after images of Saint-Martin-Vestubie reveal the paths that the torrents took downhill, sweeping away everything in their paths and leaving at least two people in this town dead

Pack of wolves on the loose after flooding

As rescuers sift the rubble of Saint-Martin-Vestubie for the missing and survivors try to rebuild, the town is also facing an unusual threat – from escaped wolves.

Thirteen of the animals were kept at the nearby Alpha Animal Park before the storm, which washed away part of their enclosure and allowed them to escape.

One resident reported seeing ‘several’ of the animals along a road near the village after the storm had passed, saying they appeared ‘completely distraught’.

At least two of the wolves are thought to have died in the storm, but it is not clear how many survived, or where exactly they are now.

A foundation established by actress Brigette Bardot has put forward funding to rescue and house the escaped animals, saying they should not be killed.

Packs of wolves are known to live wild in the Maritime Alps, though they are typically seen on the Italian side.

Sightings on the French side are rarer, though packs are thought to have established themselves in the Hautes Alpes, around 50 miles to the north.

The toll was revised down from 12 after it emerged that six bodies which washed up on the Italian coast were likely corpses that had been swept out of cemeteries in France by the floods.

Bernard Gonzalez, the prefect of the Alpes-Maritimes, revealed the shocking news late Monday, as he told French media that the bodies are in a state of ‘great decomposition’, meaning they are almost certainly not flood victims.

Four of the deaths have occurred in France – with two bodies found in Saint-Martin-Vestubie, one in Lantosque, and another in Colomars.

Four more deaths occurred on the Italian side, with two workers perishing on Monday after a bulldozer they were using to clear a flood-damaged road overturned, crushing them.

A 47-year-old worker and another man who is still being identified, were killed near Bajardo, a short distance across the border from Santi-Martin-Vestubie, Repubblica reported.

Meanwhile a 53-year-old volunteer firefighter was reported dead in Piedmont, further to the north, and another man died in Val D’Aosta after his car fell into a swollen river, French site Sud Ouest reported.

French rescue teams have advised against all-but-essential travel to the Maritime Alps region for the next 15 days while search operations are carried out.

Firefighters told local media that they are looking for eight people who were known to have been caught up in the floods, and have not been seen since.

They are also trying to make contact with another 13 people who typically frequent the area, but whose current whereabouts are unknown.

Among those caught up in the floods were Léopold and Josette Borello, aged 88 and 84, whose house in Roquebillière was pictured surrounded by floodwaters shortly before it collapsed. 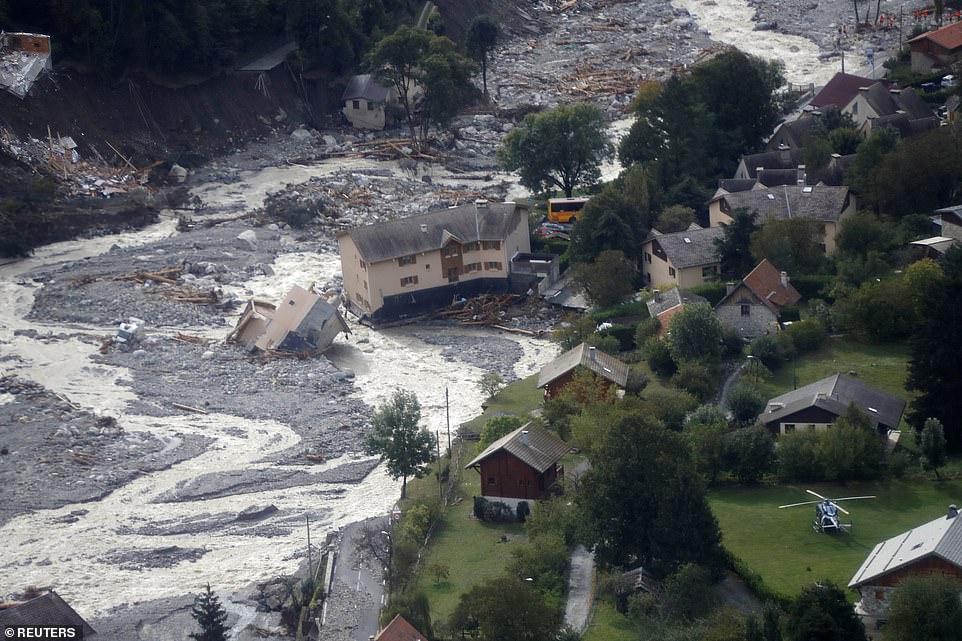 At least two people were killed in Saint-Martin-Vestubie amid the flooding (pictured), while two others died in villages further down the mountains. Four people have also been confirmed dead on the Italian side of the border 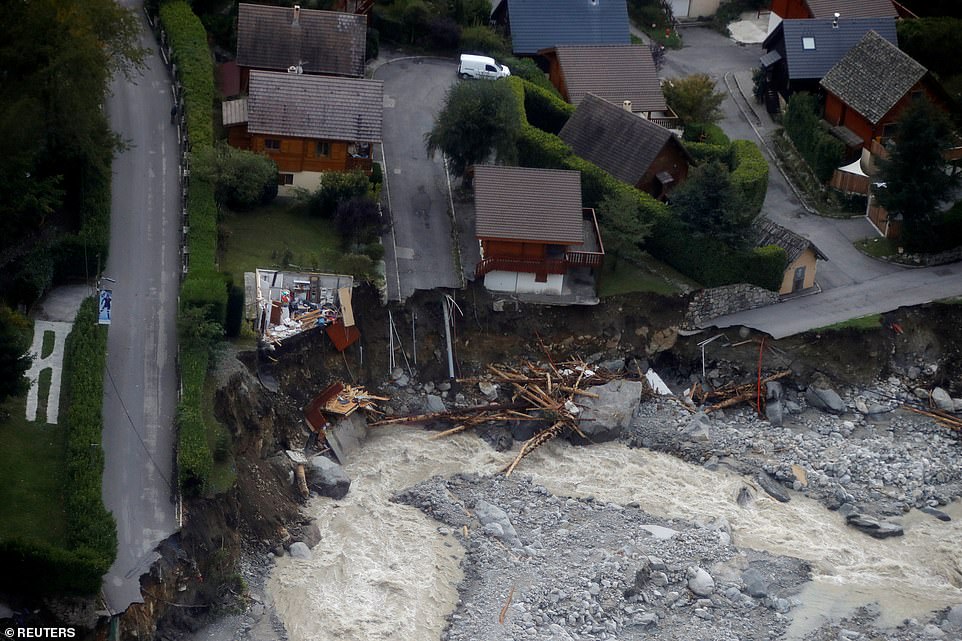 Rescue workers are still searching for eight people who are known to have been caught up in the floods, and are trying to make contact with another 13 locals whose whereabouts are unknown (pictured, damage in Saint-Martin-Vestubie) 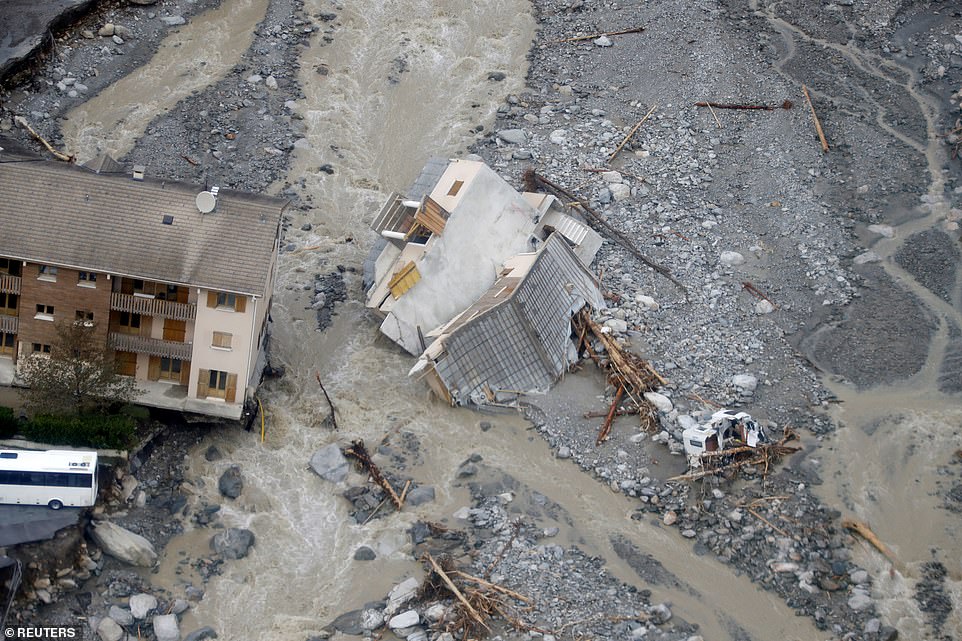 The prefect of the Alpes-Maritimes region, where the town of Saint-Martin-Vestubie is located, has described the flooding as the ‘worst in a century’ and asked people to avoid non-essential travel to the area for 15 days 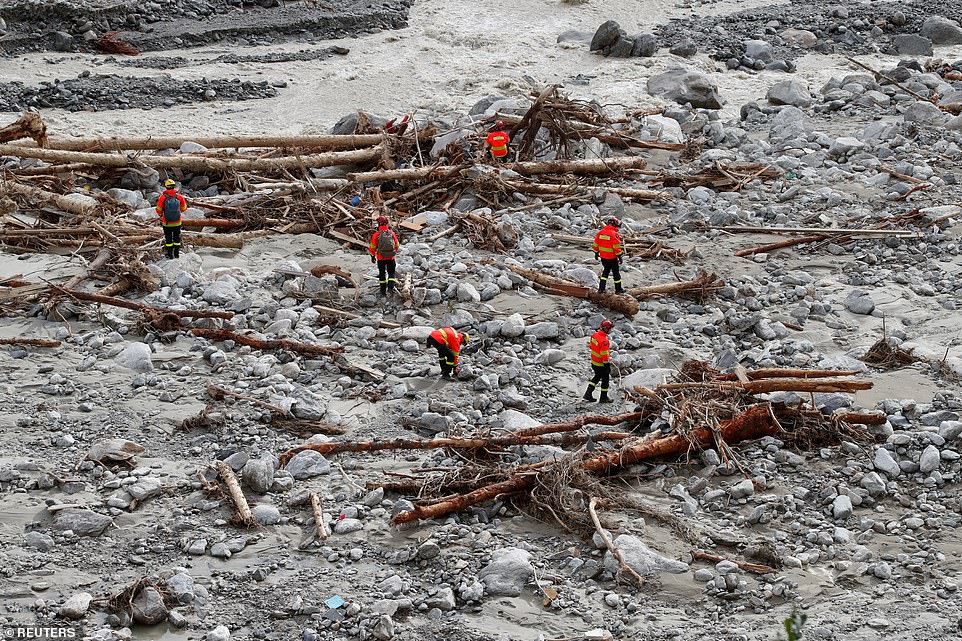 Firefighters and rescue workers search an area which used to be a road but has been left as little more than a rocky crater following Storm Alex, which dumped three months’ of rain in just a few hours at the weekend 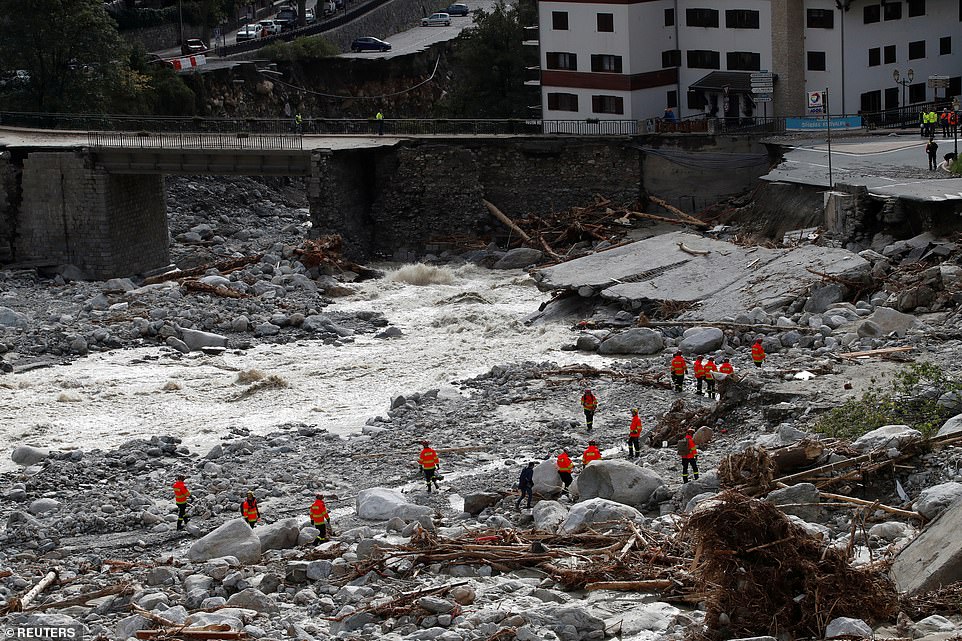 Firefighters and rescue workers examine an area to the east of Saint-Martin-Vestubie, where roads and fields were swept away by a torrent of floodwater as it raced downhill

Their son, Eric, told French media that his parents are almost certainly dead – saying he spoke to firefighters shortly before the house came down, and was told the couple were trapped. 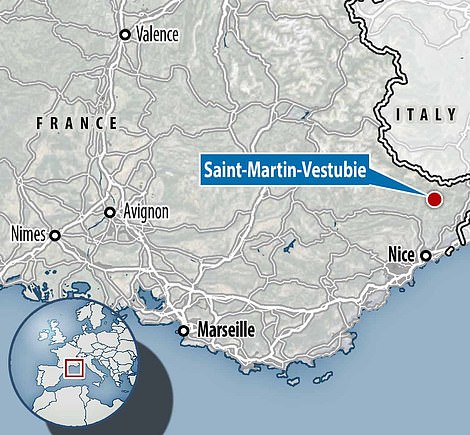 Saint-Martin-Vestubie is located in the south of France, 25 miles north of Nice and close to the Italian border

He said: ‘A firefighter explained to me that the only solution was to hoist them out, but he told me that the helicopters couldn’t fly [because of the weather]. When I hung up, I realized that it was all over.

‘Some people say my parents didn’t want to leave the house. That’s wrong. They weren’t suicidal. They just took too long to assess the situation and prepare their business… This time was fatal to them.’

Over the weekend Storm Alex caused widespread damage in several villages around Nice on the French Riviera in what the city’s mayor Christian Estrosi called the worst flooding disaster in the area for more than a century.

Meteo France registered rainfall of 19.69 inches over 24 hours in Saint-Martin-Vesubie on Saturday and close to 15.74 inches in several other towns – the equivalent of more than three months of rain at this time of the year.

Authorities have struggled to give a precise estimate for the death toll from the flooding as emergency services struggle to reach flood-hit villages as many roads have been washed away or are still blocked by debris.