Sound reverberated inside Stonehenge thousands of years ago, according to a new study.

Researchers in the UK used a scale model to study the acoustic qualities of the mysterious monument built some 4,000 years ago, when all 157 stones were intact.

To approximate the original location and shape of the stones, laser-scanned data of Stonehenge’s modern-day configuration was combined with archaeological evidence of its original layout – and the team found it was more like a movie theater than an open-air space.

It’s unlikely Neolithic Britons had that in mind when they constructed Stonehenge in the 3rd millennium BC, but researchers believe they would have exploited the sound effects while singing or speaking.

Researchers used a scale model of Stonehenge to study the acoustic qualities of the mysterious monument some 4,000 years ago, when all 157 stones were intact. To approximate its original design, laser-scanned data of Stonehenge’s modern-day configuration was combined with archaeological evidence of its original layout

‘There are clues to where the stones were, such as filled-in holes where they were stood,’ acoustic engineer Trevor Cox, who led the project in collaboration with Historic England, said last fall.

A 1:12 scale model, dubbed Stonehenge Lego, was constructed under the assumption there were originally 157 stones on the site, including 30 in the outer circle.

Researchers at the University of Salford used 3D printing to create 27 stones of different shapes and sizes. 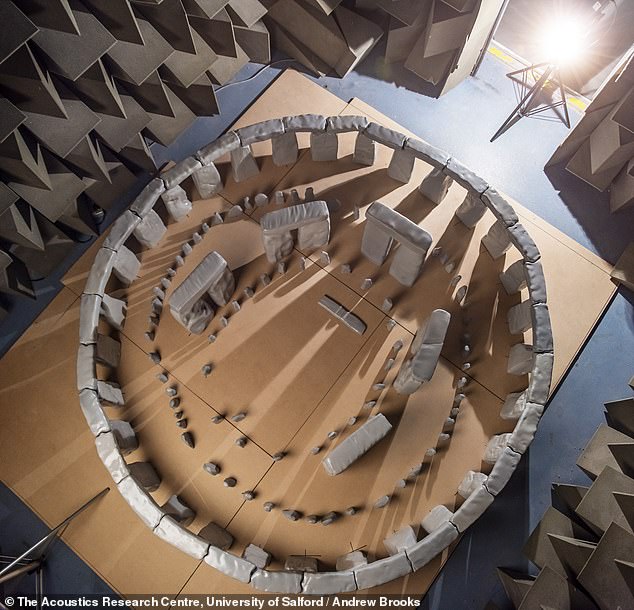 A 1:12 scale model was constructed using 3D printing and custom modeling. Speakers placed inside and outside ‘Stonehenge Lego’ emitted chirps at various frequencies 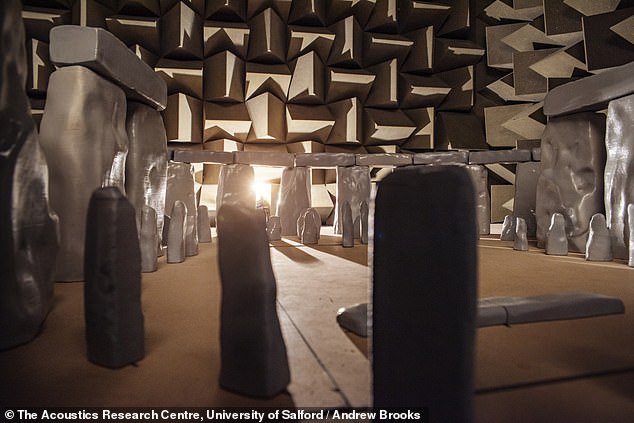 Researchers discovered sound briefly lingered inside the model on the mid-frequency range. ‘Surprisingly, considering the Stonehenge has no roof and there are lots of spaces between the stones, the acoustics are more like an enclosed room, like a cinema, rather than an outdoor space,’ acoustic engineer Trevor Cox said. ‘It really does enhance singing.’

Then they used silicone molds of those stones to construct the remaining 130.

Stonehenge Lego was placed in a special acoustic chamber where it was tested via a technique called ‘auralization.’

‘It is the sound equivalent of visualization,’ Cox said. ‘We can virtually place a source of sound in a space.’

Speakers at various points inside and outside the model emitted chirps that varied from low to high frequencies.

Reverberation time – or how long it takes sound to degrade by 60 decibels – averaged about 0.6 seconds. 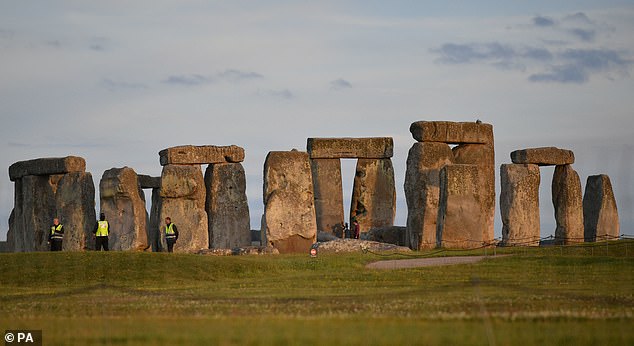 Stonehenge’s auditory qualities have been studied before but, with so many stones missing and displaced, it’s never been a true representation of the past. And noise from tourists and the nearby highway has also tainted on-site testing.

In comparison, reverberation time is about 0.4 seconds in a typical living room and around two seconds in a large concert venue, according to Science News.

When Cox transmitted his own voice into Stonehenge Lego, he said the acoustics gave it a ‘majestic and reverberant’ quality.

Because of how the real stones were laid, he said, his voice wouldn’t have projected into the surrounding countryside or even toward people standing nearby.

And sounds from outside the Wiltshire-based attraction wouldn’t have reverberated inside, either.

‘Surprisingly, considering the Stonehenge has no roof and there are lots of spaces between the stones, the acoustics are more like an enclosed room, like a cinema, rather than an outdoor space,’ Cox said. ‘It really does enhance singing.’ 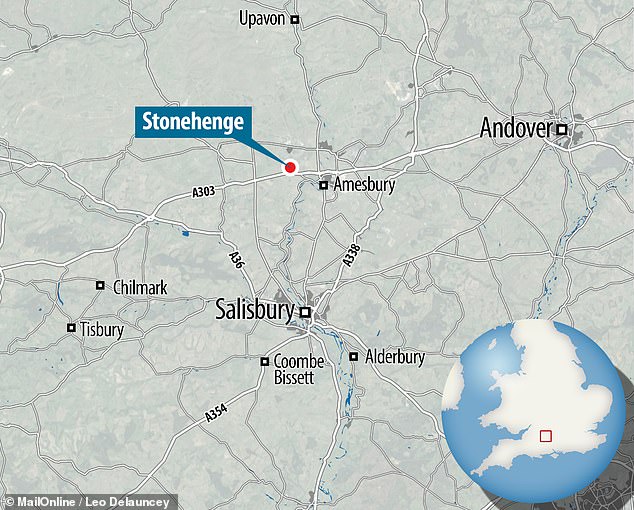 The 1:12 scale model Stonehenge was created by researchers from the University of Salford in collaboration with Historic England, which oversees the famous Wiltshire site

Though it’s doubtful Neolithic Britons understood the audio science when they lugged the massive monoliths into place, Cox said, ‘it would be astonishing if they didn’t exploit the acoustics once it was built.’

‘The amplification could have aided speech communication and the reverberation improved musical sounds,’ he wrote in the October 2020 issue of the Journal of Archaeological Science.

Understanding how the site responded to sound may help scientists unlock what the site was ultimately used for, he said.

Stonehenge’s auditory qualities have been studied before but with so many stones missing and displaced it’s never been a true representation of the past, he said.

Noise from tourists and the nearby highway has also tainted on-site testing.

Measurements taken at a Stonehenge replica in Washington State are imprecise, Cox maintains, because it’s made of concrete blocks, which are much more homogenous than real stone.

Stonehenge Lego gives researchers ‘brand new insights into what our ancestors would have heard in the stone circles,’ he said last fall.

‘To understand a space we need to not only know how it looked but also how it sounded,’ he added. ‘Think of any modern ceremony and it involves sound, and it is a reasonable guess that people would have talked and made music inside or around the henge.’

HOW WAS STONEHENGE BUILT? 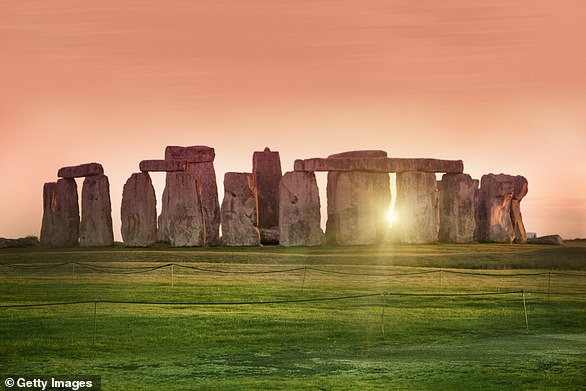 Stonehenge was built thousands of years before complex machinery was invented, yet its creators managed to tow rocks weighing several tons into place.

To do this would have required a high degree of ingenuity, and experts believe the ancient engineers used a pulley system over a shifting conveyor-belt of logs.

Historians now think that the ring of stones was built in several different stages by different tribes.

The first would have been completed around 5,000 years ago by Neolithic Britons who used primitive tools, possibly made from deer antlers.

Then their descendants continued construction over the centuries.

Eventually, the development of better tools and techniques would have helped in the erection of the stones.