EXPRESS INFORMER > Business & Finances > STOCKS TO WATCH: Will Britain be able to keep lights on this winter?

STOCKS TO WATCH: Will Britain be able to keep lights on this winter in face of energy crisis created by Vladimir Putin’s invasion of Ukraine?

Will Britain be able to keep the lights on this winter in the face of an energy crisis created by Vladimir Putin’s invasion of Ukraine?

That will be the question on Thursday when the National Grid publishes its ‘early view’ of the outlook for demand.

The report will forecast how tight the ‘margin’ of available supply will become.

In the dark?: It was reported earlier this year that electricity may have to be rationed if Russia cut supplies to the EU

It was reported earlier this year that electricity may have to be rationed if Russia cut supplies to the EU.

Some German consumers are already facing rationing. Europe’s biggest economy is particularly vulnerable should the Kremlin decide to choke off gas dispatched via the Nord Stream 1 pipeline.

Russian imports made up only 4 per cent of the UK’s gas needs last year.

But Britain would still be vulnerable to disruption in energy markets.

‘Sort of’ good news for THG

Well, sort of. Investment bank Jefferies has resumed coverage of the stock with a ‘buy’ rating and a £1.20 price target.

That might be cold comfort to anyone who bought into the IPO at £5, or when the stock hit £8 in January 2021.

But these days, every bit of optimism helps. 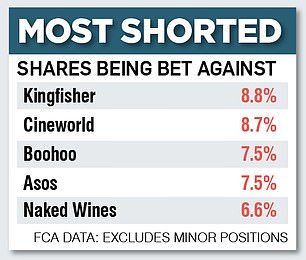 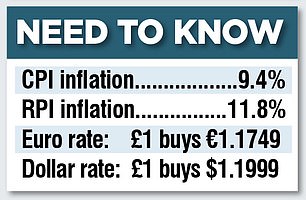 Chatter about Haleon picks up

Chatter about Haleon’s takeover prospects has picked up after its wobbly start as a listed company last week.

Shares in the demerged firm, which owns brands such as Sensodyne and Panadol, started trading at £3.30 but ended their first week at £3.16.

If the price slides in coming months, Haleon could find itself in the crosshairs of potential buyers, according to City advisers.

Consumer healthcare is a hotbed for trade buyers at the moment.

Among these are former suitor Unilever, Procter & Gamble and Reckitt Benckiser – the maker of Strepsils lozenges.

City sources said pressure on Haleon’s share price could be down to concerns that its former parent GSK – or US drugs giant Pfizer, which also holds a chunky stake – could dump shares when a lock-up agreement expires in November.

Jupiter’s stock has almost halved since Formica took over three years ago.

Assets under management were £55.3billion in the first quarter, a fall of £5.2billion, partly down to British and European equities, Jupiter’s core sectors, falling out of favour.

That means Jupiter could attract private equity buyers as it is squeezed by alternative asset managers and passive players such as Vanguard, sources say, adding a buyer could merge Jupiter with other active asset managers.