STOCKS TO WATCH: With deadlines approaching and competing offers battling it out, you have to feel for puzzled M&C Saatchi shareholders

You have to feel for M&C Saatchi shareholders.

They have two takeover offers to choose between – or stick with the advertising group and its buoyant performance.

Expansion plans are going perfectly well without the need for another party to get involved, a trading update seemed to imply last week.

The bids come from UK ‘Tech Queen’ Vin Murria, a serial entrepreneur whom M&C has rejected from the start, and Next Fifteen Communications.

The trouble is both offers include shares and cash. So, whether one deal is better than the other has swung back and forth with the share price.

Next Fifteen may now have pulled ahead, as its offer has risen to more than 200p a share.

This could be enough to swing some shareholders.

An insider told Stocks To Watch a few weeks ago a 200p bid would be the threshold.

With deadlines approaching in the coming weeks, and competing offers battling it out, many investors will still be scratching their heads.

Kistos began its push in May, but last week’s improved offer has helped lifted Serica’s value to more than £1billion.

This means retail investor power couple David and Debbie Hardy have seen their stake soar by £25million in two months to more than £100million.

That should help them through the cost-of-living crisis.

Heatwave or not, Nanoco’s lawyers have been spending the summer preparing for the next round of the Manchester minnow’s David-and-Goliath fight against Samsung.

A trial is due soon in Nanoco’s battle over whether Samsung knowingly used the firm’s tech in its bestselling QLED TVs – vigorously denied by the South Korean electronics manufacturer.

Nanoco has been optimistic since it won a US Patent Trial and Appeal Board case in May.

But it may all have been too much for Richard Griffiths, founder of former broker Evolution Securities, who has been a long-time investor.

He sold a chunk of his holding last week, taking it to less than 3 per cent – below the threshold for public declaration. 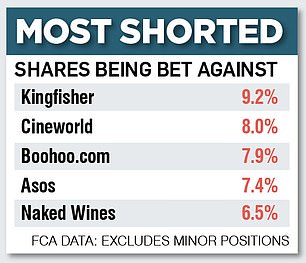 There’s scepticism in the City over Hargreaves Lansdown ahead of its full-year results next Friday.

The trading hub for individual investors has attracted a record amount of shorts from hedge funds which will make money if its share price falls. 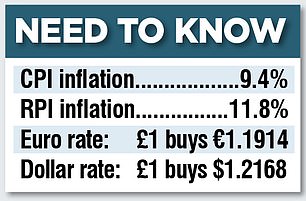 Six groups have built up the 3.84 per cent position, including the UK’s biggest short-selling fund, Marshall Wace.

Hargreaves has suffered the same fate as most so-called ‘pandemic winners’, whose huge growth during Covid has since fizzled.

The outlook will be key.

Will ordinary Britons be less likely to dabble this autumn as higher bills hit households and pots of spare cash shrink?