EXPRESS INFORMER > Business & Finances > STOCKS TO WATCH: Are energy shares now a buy for the brave?

STOCKS TO WATCH: With Chancellor mulling an extension of his ‘energy profits levy’ to utility companies, are energy shares now a buy for the brave?

It was the policy the City had been bracing itself for and it finally arrived last week – oil and gas companies were hit with a windfall tax.

While shares in oil giants BP and Shell remained steady, attention turned towards others that may be in the firing line.

Chancellor Rishi Sunak said he is mulling an extension of his ‘energy profits levy’ to utility companies, such as British Gas owner Centrica and SSE.

Overheating: Deepa Venkateswaran, at stockbroker Bernstein, says the Treasury had ‘grossly overstated’ the potential its windfall tax could take from renewable energy generators

The shares of both companies were down this week.

The advice from the City seems to be: ‘Don’t panic.’

Deepa Venkateswaran, at stockbroker Bernstein, says the Treasury had ‘grossly overstated’ the potential its windfall tax could take from renewable energy generators.

She said the share price fall at SSE and Centrica last week was an ‘overreaction’ and investors should ‘buy into the dip’.

US bank JPMorgan criticised the effectiveness of taxing energy supply firms, saying: ‘We do not believe that it would be material from a financial standpoint.’

Primark is expected to put through ‘considerable’ price rises this autumn to combat rising costs, according to investment bank Credit Suisse.

The retailer, owned by Associated British Foods, is said to be open to altering its prices according to fluctuations at rivals.

The fashion market is expected to come under huge pressure this year, with the value end especially vulnerable.

But the bank forecast a return to double-digit pre-tax profit margins before its peers thanks to Primark’s scale, products and supply chain.

It has also pushed ahead with its digital strategy, with a website revamp and greater engagement on social media. 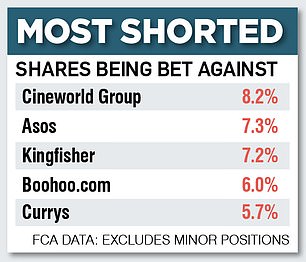 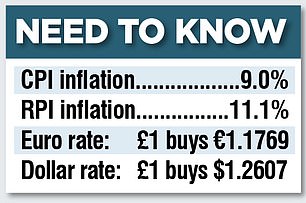 Chief executive Paul Marchant told analysts at a new store in Milan the spring/summer 2022 range was ‘as good as we’ve ever looked’.

Who would bet against it?

Hard start to life on Stock Exchange for First Tin

It has been a hard start to life on the London Stock Exchange for metals firm First Tin.

First Tin is aiming to develop one project in Germany and one in Australia before the end of 2025, with a third German mine in the pipeline.

But shares have tanked 36 per cent since listing.

Time for the board to dig a little deeper, perhaps.

Dr Martens investors will be hoping for some extra Jubilee cheer ahead of the bootmaker’s final results, which are released on Wednesday.

In its trading update in January, the British brand reported quarterly sales of £307million, up 11 per cent on the year before.

In that quarter to December 31, Dr Martens opened 11 stores, including six across Italy and the US, giving it 158 stores worldwide.

City analysts have forecast that annual sales will rise by about 17 per cent, but said Dr Martens was ‘still playing catch up’ as it would take months before post-Covid production levels could meet demand.

The City will also be looking for signs that customers are continuing to splash out on its leather boots as the cost-of-living crisis bites.