Sterling surges as global markets bounce back: Investors shrug off US inflation woe amid reports of a Kwasi mini-Budget U-turn

The pound powered higher on a wild day for markets as traders grappled with US inflation data and political turmoil at Westminster.

Sterling surged by nearly three cents against the dollar to as much as $1.379, driven at first by reports of a Kwasi Kwarteng U-turn over his mini-Budget.

But the big event for global markets was American inflation, which came in at a higher than expected 8.2 per cent for September.

Rebound: Sterling surged by nearly three cents against the dollar to as much as $1.379, driven at first by reports of a Kwasi Kwarteng U-turn over his mini-Budget

Crucially, core inflation – stripping out energy and food prices – has kept on rising, hitting a 40-year high of 6.6 per cent.

That seemed to strengthen bets that the US Federal Reserve will press on with aggressive interest rate rises, driving the mighty dollar even higher.

It also initially scuttled stocks on Wall Street, where the S&P 500 fell by as much as 2.3 per cent.

But there was a sharp turnaround in the hours following the data with the S&P closing 2.6 per cent higher as investors seemed to call the bottom of a market which has seen the New York index lose a quarter of its value so far this year.

The dollar’s fortunes also reversed, giving up ground against the pound.

It also meant a chaotic day for the euro, which plunged by a cent against the greenback before also changing course to hit $0.9805, a cent higher on the day.

‘These are signs of a distressed market, freaking out over a mild miss on a data point,’ he said.

The volatility marked the latest chapter in a period which has seen the dollar steamroller rivals.

Sterling is 16 per cent lower against the dollar so far this year – with the losses accelerating after the Chancellor’s mini-Budget last month – while the euro is down 14 per cent. 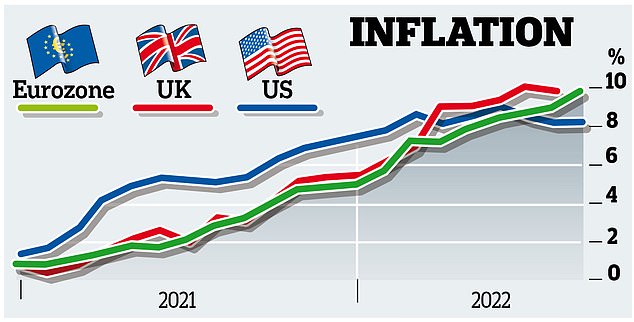 That is because of the Fed’s aggressive approach to tackling rampant inflation as well as the dollar’s status as a safe haven during periods of global uncertainty.

It matters because imports priced in dollars, such as oil, become more expensive, while countries and companies that have piled up dollar-denominated debts find it tougher to repay them.

In the US, the pressure is on to tackle spiralling prices, which are causing a headache for President Biden as mid-term congressional elections approach. But the price being paid by the Federal Reserve and other central banks for raising rates is the risk of recession.

‘We cannot possibly allow inflation to become a runaway train – bad for growth, bad for people, bad especially for poor people,’ she said.

She said: ‘Our message to everybody, not just to the UK at this time – fiscal policy should not undermine monetary policy because, if it does, the task of monetary policy only becomes harder and it translates into the necessity of even further increases of rates.’