Pound roars back: Sterling hits $1.20 against fading dollar ahead of Hunt Budget

The pound climbed back above $1.20 against the US dollar for the first time in three months in a boost for Chancellor Jeremy Hunt ahead of tomorrow’s autumn statement.

Sterling has been rising in the past few days as the greenback weakens on speculation that the aggressive pace of interest rate hikes in the US could slow.

The recovery represents a strong bounce-back after the chaos of previous Chancellor Kwasi Kwarteng’s disastrous mini-Budget, which saw the pound hit an all-time low of less than $1.04 in September.

Recovery: Sterling has been rising in the past few days as the greenback weakens on speculation the aggressive pace of interest rate hikes in the US could slow

The gains later partially faded and sterling slipped below $1.19. Sterling also climbed against the euro, rising by as much as a cent to €1.1478.

Its rally was partly down to official figures showing stronger-than-expected wage growth of 5.7 per cent in the UK.

That could add to the ammunition of Bank of England hawks pushing for another big interest rate hike next month in the fight against inflation.

But the broader currency story over the last few days has been the dollar’s weakness after US consumer price inflation figures for October came in weaker than expected last week.

Yesterday, US farm and factory inflation data was also milder than forecast, adding to the sense America’s price spiral may have peaked.

That would give the US Federal Reserve scope to scale back the aggressive pace of interest rate hikes seen over recent months.

The pound’s position heading into the autumn statement is much stronger than under Liz Truss’s short-lived and chaotic premiership.

Even before the mini-Budget the pound was trading at less than $1.13 following a summer of political uncertainty after Boris Johnson’s ousting. 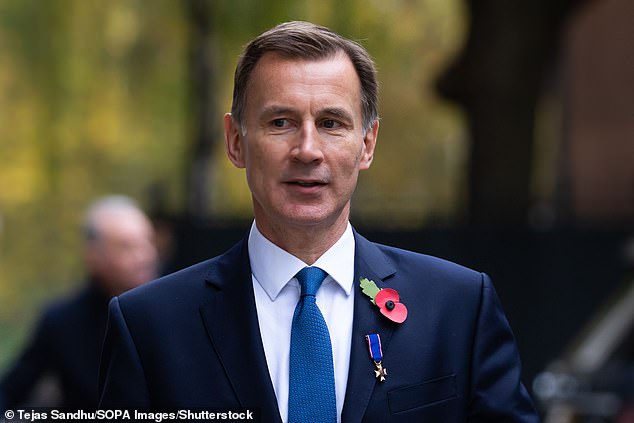 Since Truss was turfed out, Hunt and her replacement Rishi Sunak have sought to reassure markets that they will get a grip on public finances – reversing most of Kwarteng’s poorly-received and unfunded tax cuts, and floating the likelihood of further drastic action this week.

The pound’s weakness has had some benefits such as drawing US tourists to London and making manufactured goods more competitively priced for export customers. But it has added to inflation pressures facing consumers and businesses as imports priced in dollars become more expensive.

The pound is still down by 12 per cent against the dollar so far this year.

Gilts – parcels of UK government debt – were another victim of the mini-Budget.

Market turmoil saw investors demanding rates of more than 4.5 per cent for buying ten-year gilts, the highest rate since the 2008 financial crisis, but they have since dipped back to around 3.3 per cent.

There could be more turbulence to come as Hunt attempts to close the £50billion black hole in public finances without crushing economic growth.

Jeremy Stretch, a currency strategist at CIBC Capital Markets, said: ‘We do have the fiscal statement coming and that is going to be a sea of negativity.