A Florida woman is being slammed as ‘pathetic’ and a ‘monster’ after she asked the internet to Photoshop her stepson out of a family photo.

Natalie, her husband, their two shared biological children, and her husband’s son from a previous relationship all posed for professional family photos recently, but Natalie wanted one with just ‘her boys’ — not her young stepson — so she shared the image in a Facebook group, asking strangers to remove the child for $10.

After screengrabs were shared on Twitter last week, they’ve gone viral, with hundreds of commenters criticizing the woman as ‘gross’ and ‘heartless.’

Cruel: A Florida woman is being slammed as ‘pathetic’ and a ‘monster’ after she asked the internet to Photoshop her stepson out of a family photo 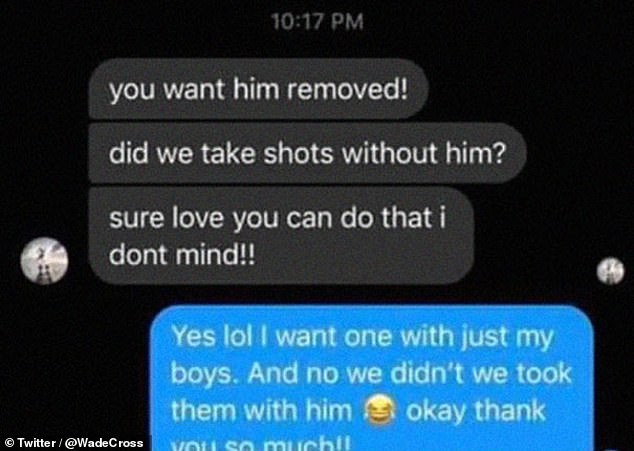 Awful: Natalie first asked her photographer’s permission to get the photos edited, saying she wanted one with just ‘her boys’ 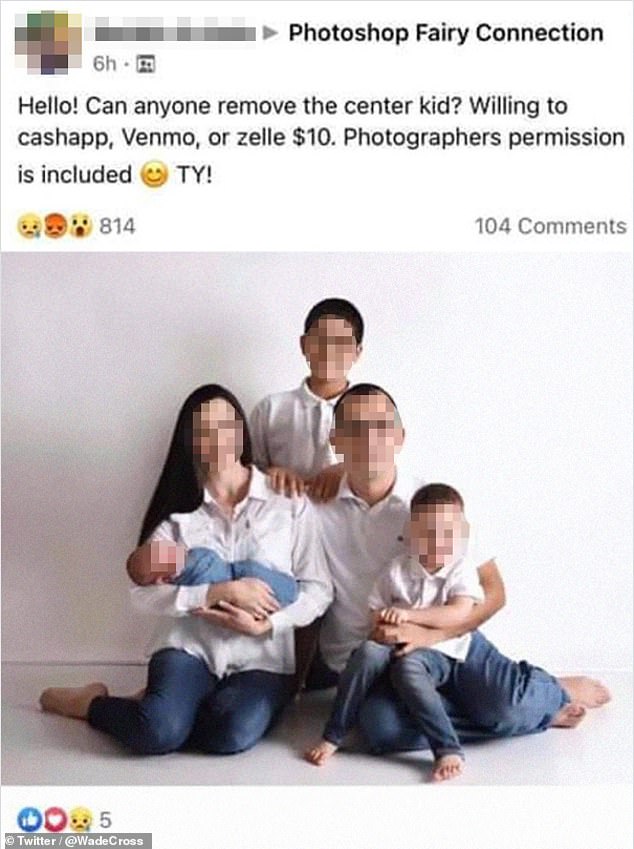 Booted: She then shared the image in a Photoshop group on Facebook, offering to pay someone to make her young stepson disappear

Twitter user @WadeCrosss shared the screengrabs of the saga on October 9, but didn’t indicate how he is connected to the people involved.

First, Natalie texted photographer Dawn to ask if it was OK for her to get her work Photoshopped.

‘This pictures is it okay if I post it in a photo shop group to see if my step son can be removed? If not I completely understand. Ty! [sic]’ she wrote, sending a snap of the family of five.

‘You want him removed!’ wrote the photographer. ‘Did we take shots without him? Sure love you can do that I don’t mind!!’

‘Yes lol I want one with just my boys,’ Natalie answered. ‘And no we didn’t we took them with him [crying laughing emoji] okay thank you so much!!’ 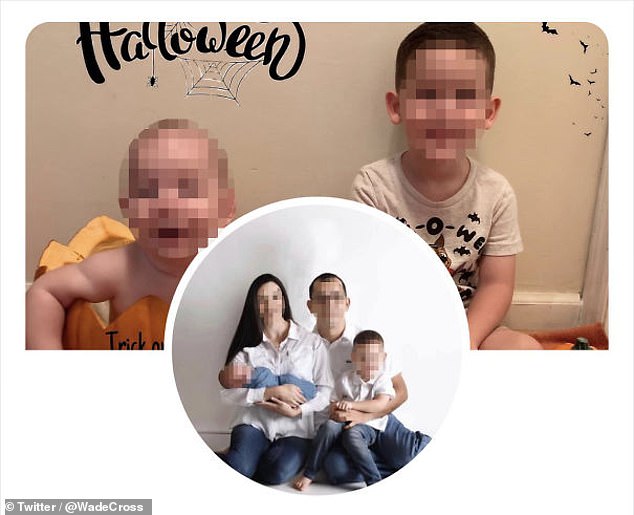 It worked: Someone was apparently willing to do it, and she posted the image without her stepson on Facebook

Natalie then posted the image in the Photoshop Fairy Connection group on Facebook.

‘Hello! Can anyone remove the center kid? Willing to cashapp, Venmo, or zelle $10. Photographers [sic] permission is included,’ she wrote.

Those in the Facebook group didn’t seem to like the request — rather than liking it, many reacted with sad and angry emojis.

Still, Natalie appears to have had her wish granted, as her Facebook profile photo shows the image with just her biological children, her stepson edited out.

Once it was shared on Twitter, though, more negative reactions poured in.

‘Imagine having a heart this small. One can only hope Step Mommy Dearest never makes her step-son feel as unwelcome as she makes it sound in these messages,’ said one.

Others called her ‘cold-blooded,’ ‘heartless,’ ‘cruel,’ and ‘truly awful.’

‘Not seeing too many defenders of this monster, but to be clear: this isn’t just her wanting 1-2 shots with her bio kids in the album. She chose the *edited* version as her profile picture – the photo she uses to represent herself to the world. That’s who she sees as her family,’ said one more.

Some shared their feelings for the stepson, who surely is aware of his stepmother’s feelings.

‘Well…i hope that boy somehow feels the love from everyone here that he doesn’t even know. I hope he rises up to become better than that woman ever will be….’ wrote one.

‘Instant tears but relieved face there are some step-parents who should not be allowed near any children, even their own. I hope this poor boy finds the kind of friends I met by accident on the way to healing from just those scars. May they show him acceptance, belonging and love,’ wrote another.

‘I would never date someone who wouldn’t treat my kids like their own. And that goes both ways. What a terrible feeling for that kid!’ said yet another.

Enabled: Others said their hearts were breaking for the boy, and many blamed the dad for putting up with his wife’s behavior

Others also slammed the boy’s father for allowing it.

‘That poor child & what a pathetic father to allow her to do this to his son,’ wrote one.

‘How can the husband still be married to her at this point? The moment I saw the new header without my child I would be ready to fight. I know all too well how it feels to be the resented step-child and it’s not fun,’ said one more.

‘Shame on her. Shame on the father for allowing this,’ said yet another.

Sadly enough, Natalie is not the first stepmother to go viral for such a cruel Photoshop request.

In December, an unidentified woman posted the results of a professional family shoot with herself, her husband, her two kids, and her stepson on Facebook.

But she wasn’t proudly showing off: Rather, she was begging strangers to cut the non-biological child out so she has pictures with just her own children. 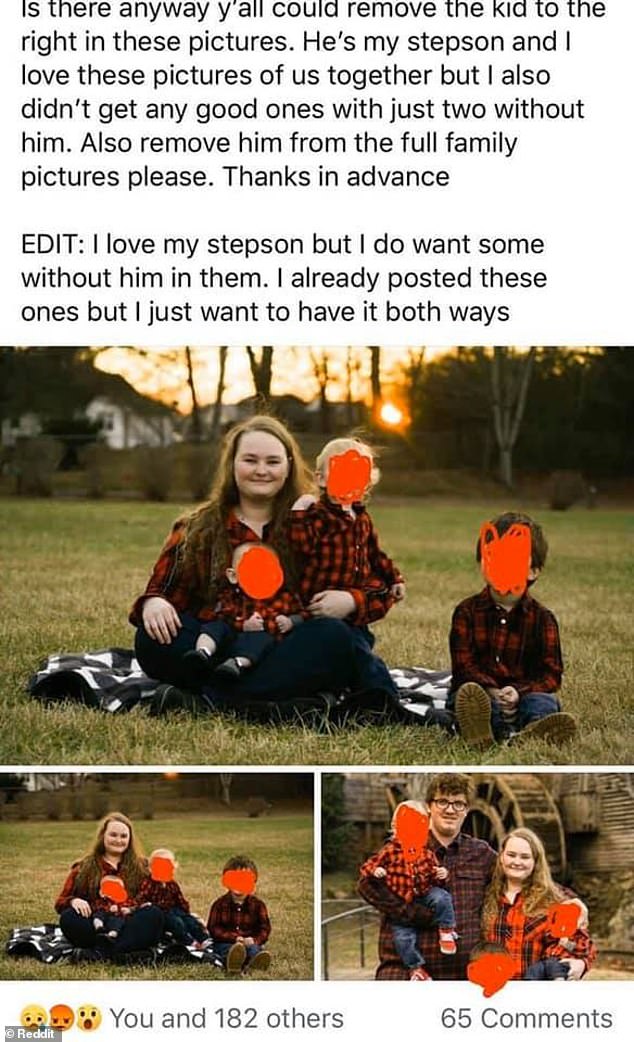 Yikes… Another woman was labeled ‘disgusting,’ deplorable,’ and several other more profane words after asking social media users to edit her stepson out of family photos last year

‘Is there any way y’all could remove the kid to the right in these pictures?’ she wrote in the post, which appears to have been shared in some sort of photography or photo-editing group.

‘He’s my stepson and I love these pictures of us together but I also didn’t get any good ones with just [my] two without him. Also remove him from the full family pictures please. Thanks in advance,’ she said.

In one picture, the woman poses with her husband, the two kids they share together, and the husband’s child from a previous relationship.

In two others, she sits alone with the kids on a blanket. But while she holds her two biological children in her lap, her stepson is sitting next to her — nearly a foot away.

A Redditor took a screengrab of the post to shame the woman, making sure to blur out the children’s faces.

Though the Redditor did not include the comments, it seems that many of them were negative, since the woman updated with a defensive edit. 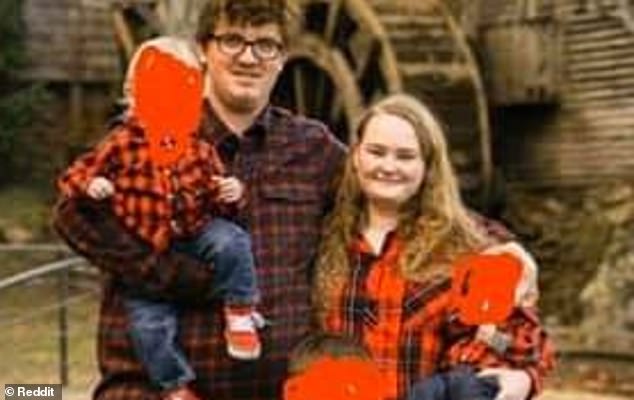 ‘Is there any way y’all could remove the kid to the right in these pictures?’ she wrote 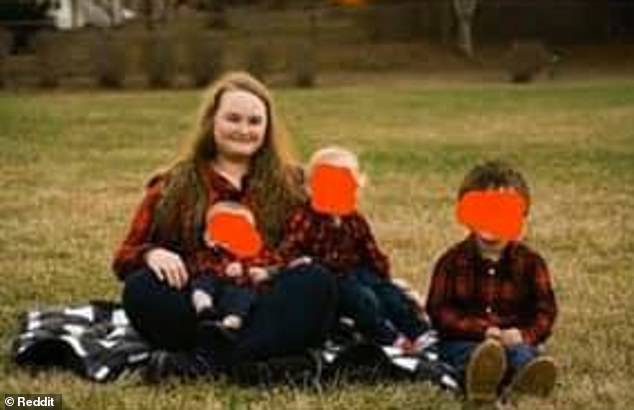 Protected: A Redditor took a screengrab of the post to shame the woman, making sure to blur out the children’s faces.

‘I love my stepson but I do want some without him in them,’ she wrote, amending the post. ‘I already posted these ones but I just want to have it both ways.’

Commenters on Reddit were horrified and crushed by her behavior.

‘This genuinely made me sad. Imagine how that child felt. I bet he noticed he wasn’t included like the other two,’ wrote one.

‘So disgusting, I hope the father reads this and divorces her a**. It’s a child! What has he done to her?’ said another

‘This is absolutely deplorable,’ wrote a third.

‘It looks like she posed just to make it easier to remove him from the pictures too… I don’t want her near children in general if she treats a child like this…’ said one more.

‘If I was fortunate enough to get her request I would have photoshopped her out and sent that back to her….”now the photo is perfect,”‘ joked yet another Redditor.