New Twitter CEO Elon Musk was criticized yet again by legendary horror author Stephen King, who said Thursday that he thinks Twitter was ‘better’ and ‘more fun’ before Musk took over.

King has been openly disdainful of the changes ushered in by Musk, including charging users for a verification checkmark in order to make the company more profitable.

Musk responded with a ghost emoji before admitting to The Shining author ‘I’m still a fan of you tbh.’

The six-month acquisition of Twitter under Musk started in April and ended in late October when he purchased the company for $44 billion.

King and Musk have traded barbs ever since Musk purchased Twitter, beginning with Musk’s proposal to charge $20 a month for Twitter Blue users. 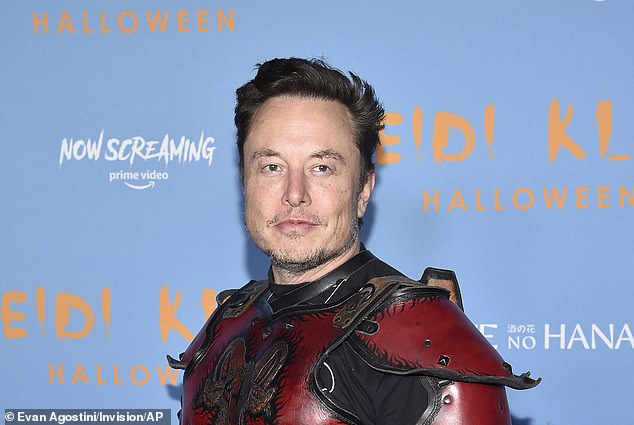 Musk responded to King and said ‘I still like you,’ but has previously quarreled with the writer on Twitter about features he planned to implement (Picture: Musk attends Heidi Klum’s 21st annual Halloween party at Sake No Hana at Moxy Lower East Side on Halloween 2022)

‘$20 a month to keep my blue check? F*** that, they should pay me,’ wrote King in early November, who has 6.9 million followers. ‘If that gets instituted, I’m gone like Enron.’

More recently, Musk gutted the company’s workforce and fired approximately half of all employees, and has now ended the remote work policy in a stark email on Wednesday.

Musk said: ‘The road ahead is arduous and will require intense work to succeed.’

Musk added that he expects workers to work at least 40 hours a week, and hours will be subject to approval from him.

He has also taken away ‘days of rest’ from Twitter staff calendars, a monthly, and a company-wide day off that was introduced during the pandemic period.

‘If you can physically make it to an office and you don’t show up, resignation accepted,’ Musk reportedly told Twitter staff.

He continues to push for users to pay $8 a month for ‘blue tick’ verification on Twitter and said in the email to staff last night that he wants the social media site to make half of its revenue from subscriptions.

He added on Thursday that ‘bankruptcy isn’t out of the question.’

Musk is also working on finding and suspending any verified bots, trolls, and spam over the next few days, according to a separate email.

His announcement ending remote working for Twitter staff came hours after he pulled the plug on the new gray ‘Official’ label because he believes it was ‘another way of creating a two-class system.’

The badge was reserved for high-profile accounts, such as media outlets and celebrities, but Musk ‘killed it’ within hours of its rollout Wednesday morning.

Along with being ‘an aesthetic nightmare,’ the light-colored gray emblem wasn’t addressing the fact that ‘there are too many entities that would be considered official or have sort of legacy blue check marks’, Musk said during a live Town Hall meeting.

‘But I go back to what I said earlier, which is that we’re going to be extremely vigorous about eliminating deception,’ he said.

‘So if someone tries to impersonate a brand, that account will be suspended, and we will keep their eight dollars.’

Musk, however, is still moving full steam ahead with plans to charge $8 a month for the blue tick. He tweeted the ‘blue check will be the greater leveler’ minutes after removing the gray checkmark.

King isn’t the only blue-tick Twitter user to threaten to abandon their blue ticks if a charge is introduced to the platform.

‘Musk can f*** off with his idea of charging blue-tickers. I give my all to this hell site for FREE. Cheeky b**** should be paying ME. Don’t need the poxy thing anyway.’

Celebrities who have threatened to boycott the site include TV screenwriter Shonda Rhimes, actor Mia Farrow, as well as Madam Secretary star Téa Leoni, She Hulk actor Jameela Jamil, as well as authors and activists Shaun King and Amy Siskind.

The blue checkmark was once a coveted feature for users, but Musk feels it creates a ‘lords & peasants system for who has who has or doesn’t have a blue checkmark’ and believes allowing anyone to sport the checkmark is giving the ‘power to the people.’

The platform was responsive to the criticism, rolling back on the move just hours after the new gray Official badge had begun to appear on a number of high-profile accounts, including those for major news organizations and public figures.

Musk is standing firm on his idea that Twitter will be ‘extremely vigorous’ about eliminating deception and bots.

‘But I go back to what I said earlier, which is that we’re going to be extremely vigorous about eliminating deception,’ he said while speaking via the platform’s Twitter Spaces feature.

‘So if someone tries to impersonate a brand, that account will be suspended, and we will keep their eight dollars.

‘And they can keep doing that, and we will just keep their eight dollars again, and again – great – we can do it all day long, they will stop.

‘So the key point here is if an account is engaged in trickery, we will suspend it.

‘But it starts to get expensive, and they will start to need a lot of credit cards and a lot of phones – and eventually they will stop paying.’

Some industry commentators have argued the new double-verification process will only make the system more confusing.

Several celebrity and publisher accounts, including Daily Mail Online, had featured an ‘Official’ label alongside the blue verified badge early Wednesday and news about the rollout was circulating the web this week.

It was also confirmed by Twitter’s director of product management, Esther Crawford, who said: ‘Not all previously verified accounts will get the ‘Official’ label and the label is not available for purchase.

‘Accounts that will receive it include government accounts, commercial companies, business partners, major media outlets, publishers and some public figures.

‘The new Twitter Blue does not include ID verification – it’s an opt-in, paid subscription that offers a blue checkmark and access to select features.

‘We’ll continue to experiment with ways to differentiate between account types.’ 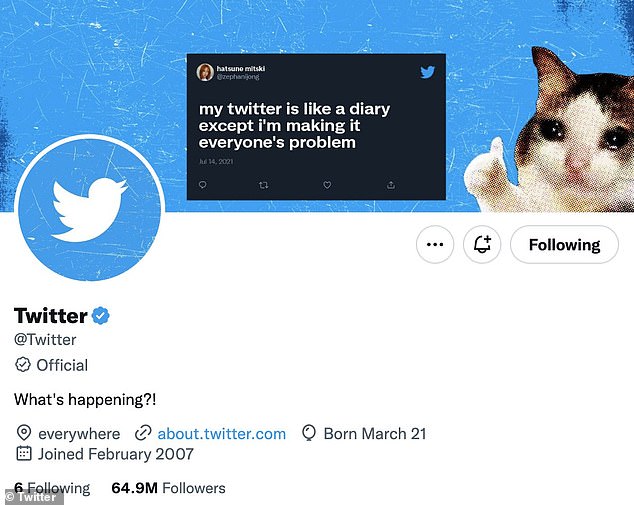 Twitter Blue will not include identity verification, but government, companies, and media outlets will have an ‘official’ label (pictured)

The changes to the verification system have been a central part of Elon Musk’s plans since the billionaire completed his takeover of the site last month.

Musk said opening the verification process up to more people will help democratize Twitter and cut down on the spam and bot accounts on the site.

The delay to the Twitter Blue update continues a chaotic start to Musk’s tenure at the company, and comes in the wake of a number of verified accounts, including those of comedians and satirists, being locked or suspended for parodying the billionaire in protest at the planned changes to the site.

Despite Musk’s stance on allowing free speech and his tweeting that ‘comedy is now legal on Twitter’ and that the blue-tick changes will give ‘power to the people,’ he moved quickly to take action against the accounts of a number of celebrities who changed their Twitter names to ‘Elon Musk’ and posted satirical messages about his takeover.

Meanwhile, the Tesla owner remains defiant in his thinking about the new direction of the company, claiming that ‘Twitter usage is at an all-time high.’