After all, the win marked their fourth championship together since head coach Steve Kerr was hired in 2014.

But for a team just two years removed from finishing in the NBA’s basement, the victory not only marked the Warriors’ seventh title, but a dramatic turnaround from 2019, when many were writing the eulogy on their dynasty.

After losing that year’s NBA Finals to the upstart Toronto Raptors, free agent Kevin Durant to the Brooklyn Nets, and Klay Thompson to a pair of career-threatening injuries, the Warriors finished in the league basement in 2020 and missed the playoffs again last season.

Thompson, now healthy again at 32, had only 12 points on Thursday in Boston, but Stephen Curry’s emerging cast of teammates picked up the slack, including Jordan Poole and Andrew Wiggins, who had a combined 32 points against the Celtics.

Curry, naturally, took care of the rest, scoring 34 points and making 6 of 11 from deep after failing to make a 3-pointer for the first time in his playoff career in Game 5 on Monday.

For his efforts, Curry was awarded his first NBA Finals MVP after watching Durant and current teammate Andre Iguodala win the award in previous championship seasons.

Warriors teammates chanted ‘f*** Draymond’ during the post-game locker room celebration, mocking Celtics fans who had spent much of the series targeting Warriors star Draymond Green, who how has his fourth NBA title.

Some Celtics fans were even seen wearing ‘Draymond Sucks’ t-shirts around Boston prior to Game 6. 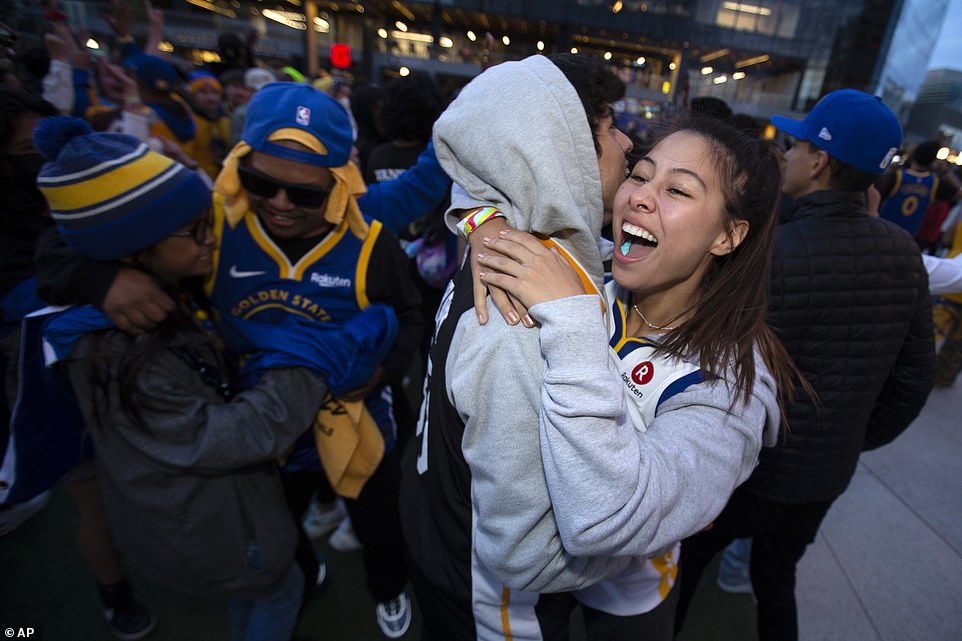 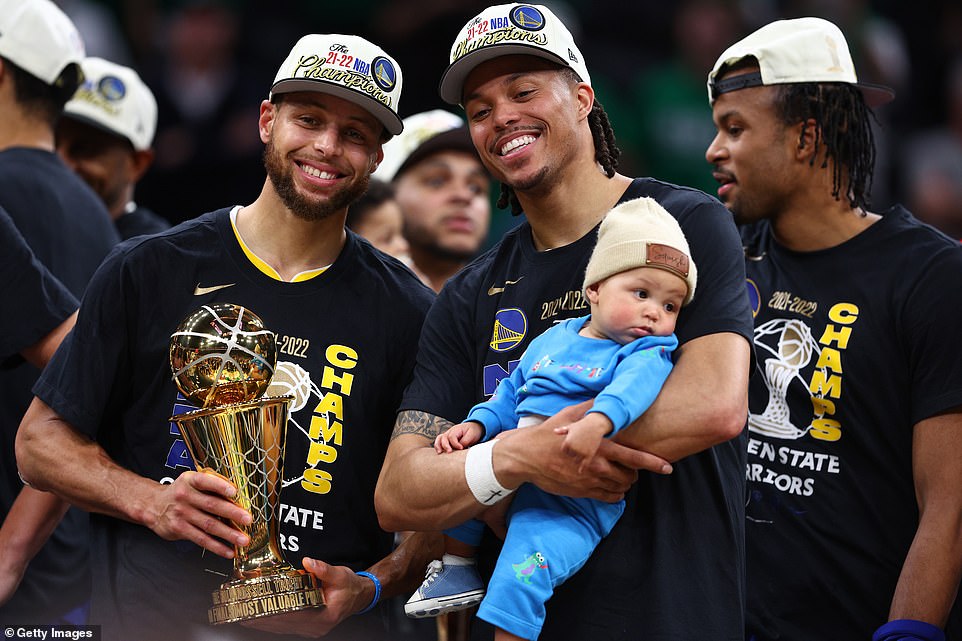 Curry (left) poses alongside his teammate and brother-in-law, Damion Lee, and his nephew, Daxon Wardell-Xavier Lee 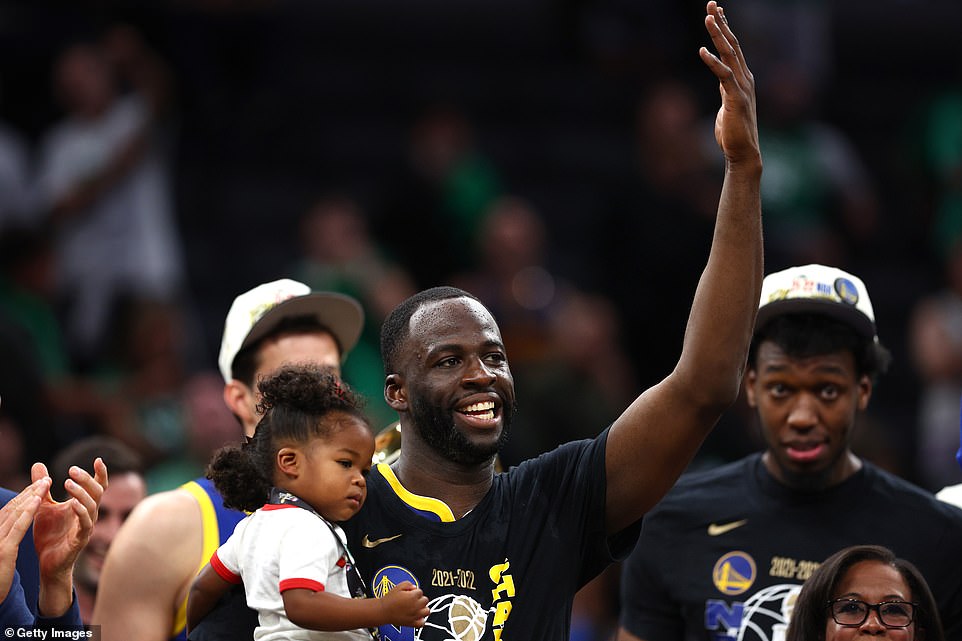 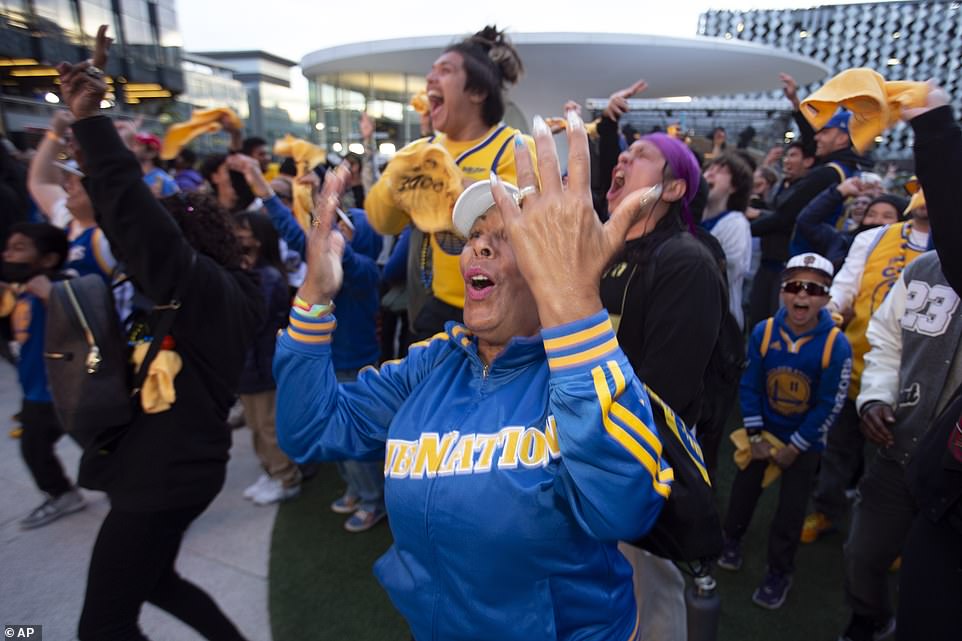 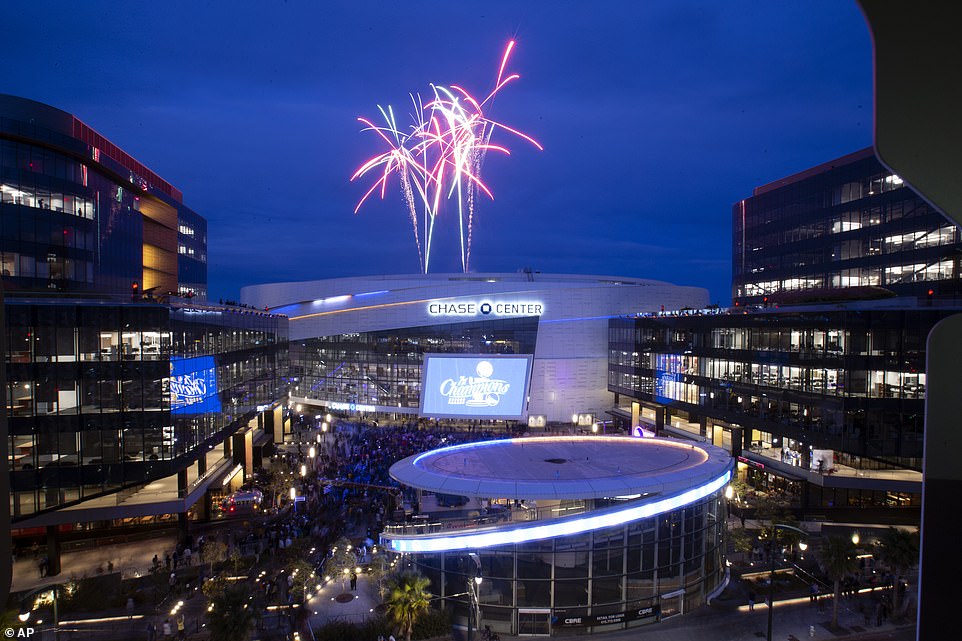 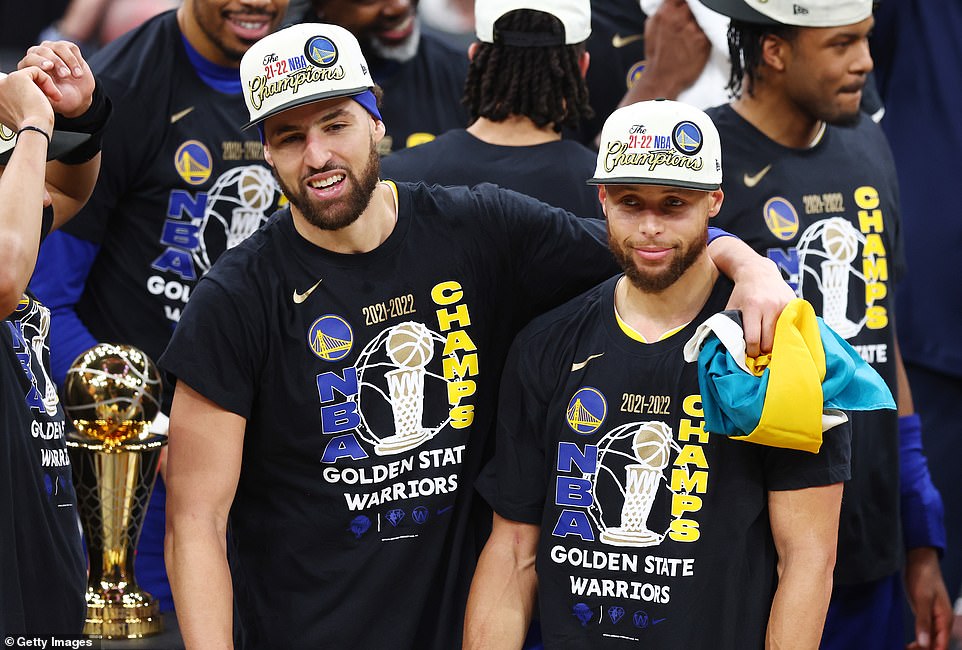 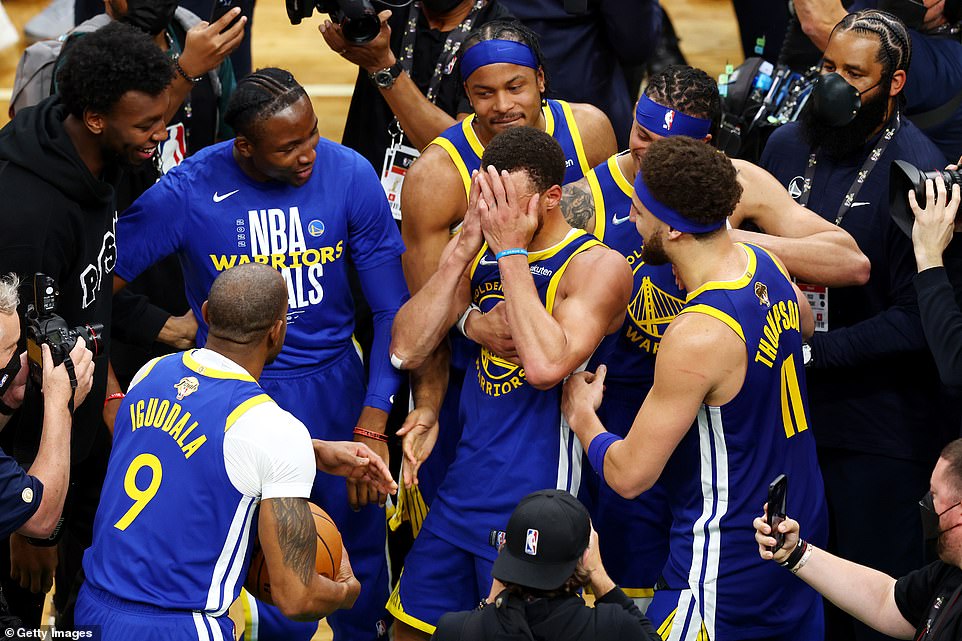 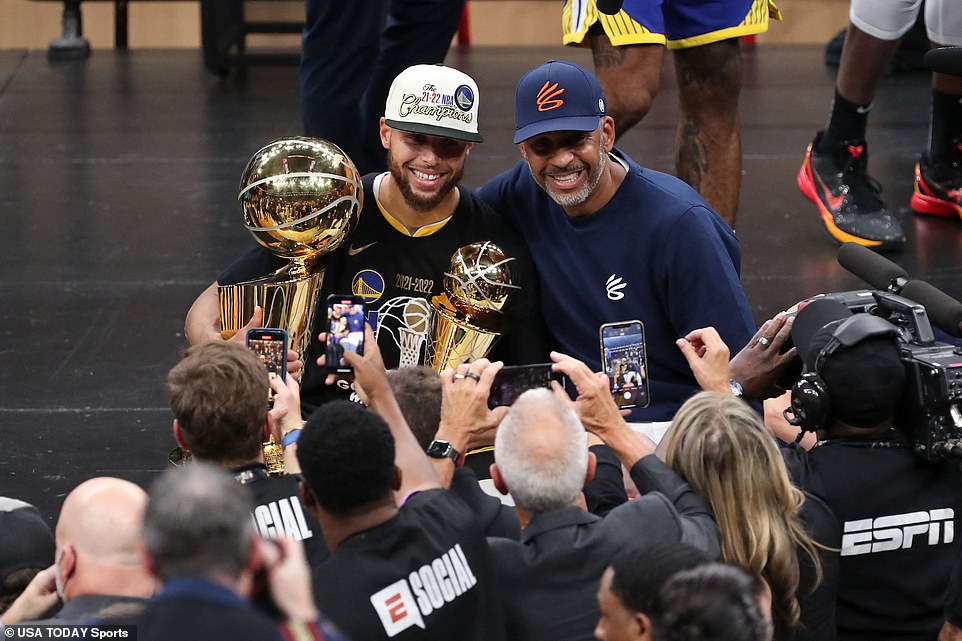 Curry pictured alongside his father, former NBA guard, Dell, who also has a son-in-law on the Warriors in Damion Lee 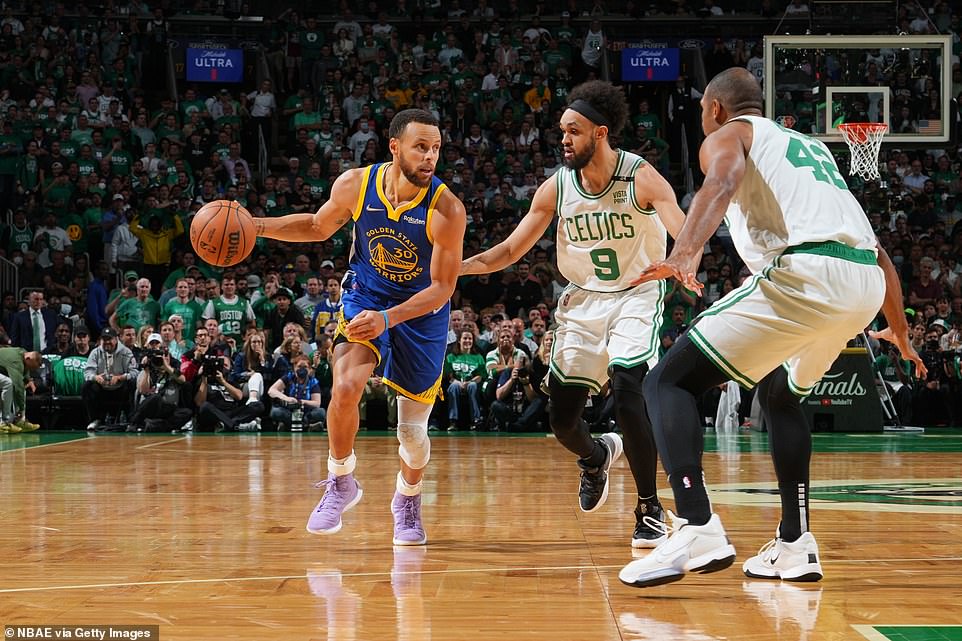 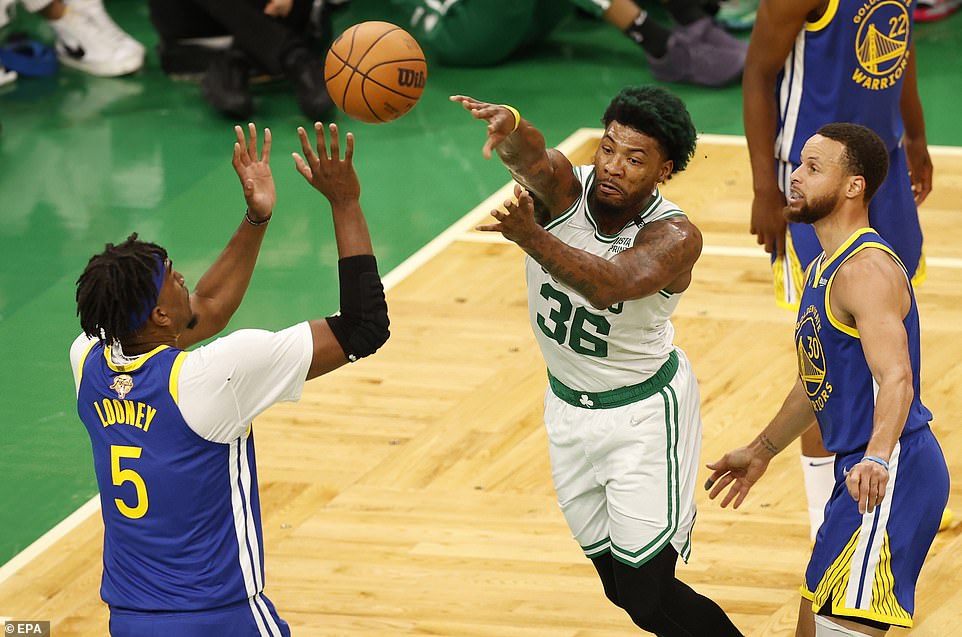 For Curry, Thompson, Green and Andre Iguodala, its a fourth championship. The first three rings came in 2015, 2017 and 2018, when Golden State was dynastic and made five consecutive trips to the finals.

Injuries, including ones that sidelined Thompson for 2 1/2 years, and roster changes changed everything. But this season, with Thompson returning around the midway point, the Warriors were finally back. 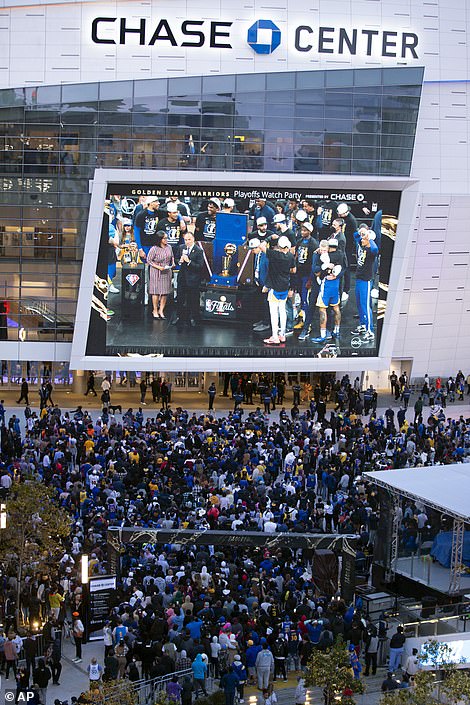 Back on top, too. Champions, again, denying the storied Celtics what would have been their record 18th championship, one that would have allowed Boston to break a tie with the Los Angeles Lakers for the most in league history.

This tale for the Warriors ended much differently than what was their most recent finals appearance against Toronto in 2019, one that saw Kevin Durant tear his Achilles tendon in Game 5 and then Thompson tear his ACL in what became the Raptors title-clincher in Game 6.

The aftermath of that loss was exacerbated by Durants decision to leave that summer in free agency to join the Brooklyn Nets and Thompsons own Achilles injury while rehabilitating his knee injury.

It thrust a Golden State team into a rebuild that became a reload. The Warriors used their two-year hiatus from the NBAs biggest stages to retool their roster – adding a past No. 1 draft pick in Andrew Wiggins, who excelled in his first finals, along with another rising star in Jordan Poole.

Jaylen Brown led the Celtics with 34 points. Al Horford added 19. Jayson Tatum finished with 13 points, but shot just 6 of 18 from the field. Boston also committed 22 turnovers, dropping to 1-8 this postseason when committing 16 or more.

It was just the fifth defeat in 22 title-series appearances for Boston, which turned its season around to have a chance at this crown. Boston was 25-25 after 50 games, then went on an absolute tear to get to the finals and nearly claim what would have been just the franchises second championship since 1986.

It was the third consecutive season where things were affected by the global COVID-19 pandemic, and while things were closer to normal, pictures and video of the championship celebration will serve as a forever reminder that the virus was still an issue. 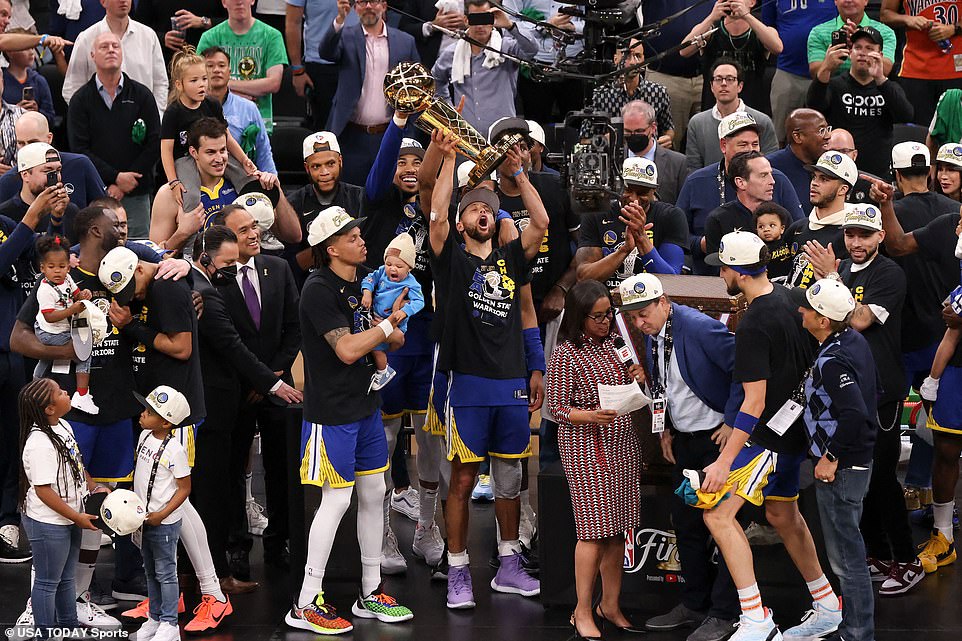 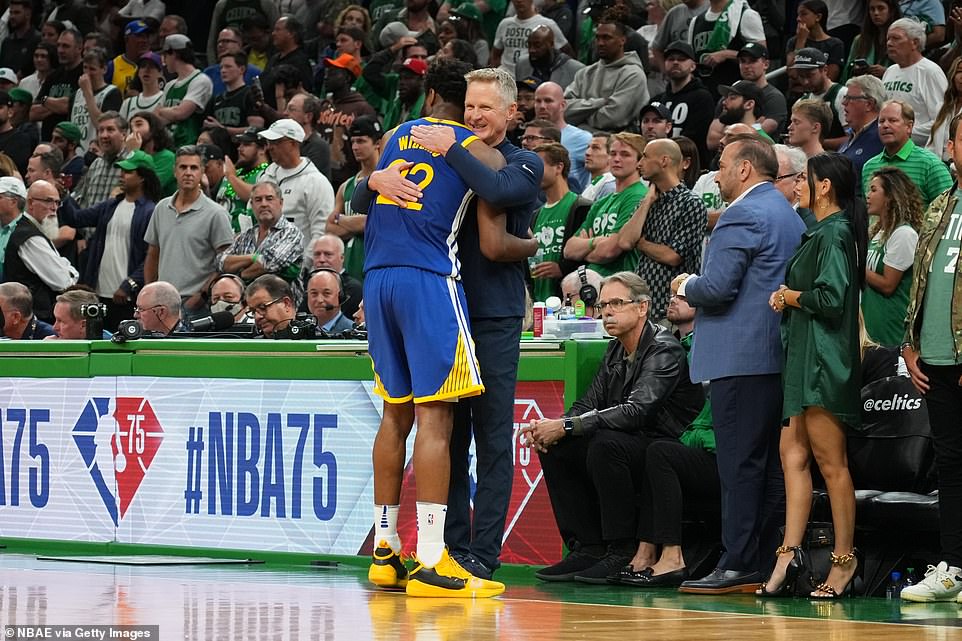 Steve Kerr embraces Warriors forward Andrew Wiggins, who emerged in the 2022 postseason as a key figure for Golden State

NBA Commissioner Adam Silver could not be at the game because he remained in the league’s health and safety protocols related to the virus. The redesigned Larry O’Brien Trophy – the golden souvenir given to the NBA champions – was presented to the Warriors by deputy commissioner Mark Tatum instead.

Boston trailed by as many as 22 points but went on a 16-4 in the third quarter to cut the deficit to 76-66 entering the fourth.

A Jaylen Brown 3-pointer made it 86-78 with 5:33 to play, but the Warriors never relinquished the lead.

When Jayson Tatum made consecutive baskets to cap a game-opening Boston blitz, TD Garden was at its absolute loudest.

It sure got quiet in a hurry.

After climbing back to the top of the Eastern Conference, the Celtics fell flat in the latter stages of the NBA Finals. The Golden State Warriors won the final three games, claiming the title with a 103-90 victory in Game 6 on Thursday night.

It was the first three-game skid for the Celtics since December, back when they were a faltering, sub-.500 team that looked like nothing like a contender.

Instead, they became one of the best teams in the league, in part because of the brilliance of Tatum, who was voted first-team All-NBA for the first time.

But he finished with just 13 points on 6-for-18 shooting in Game 6, with only one basket in the second half. 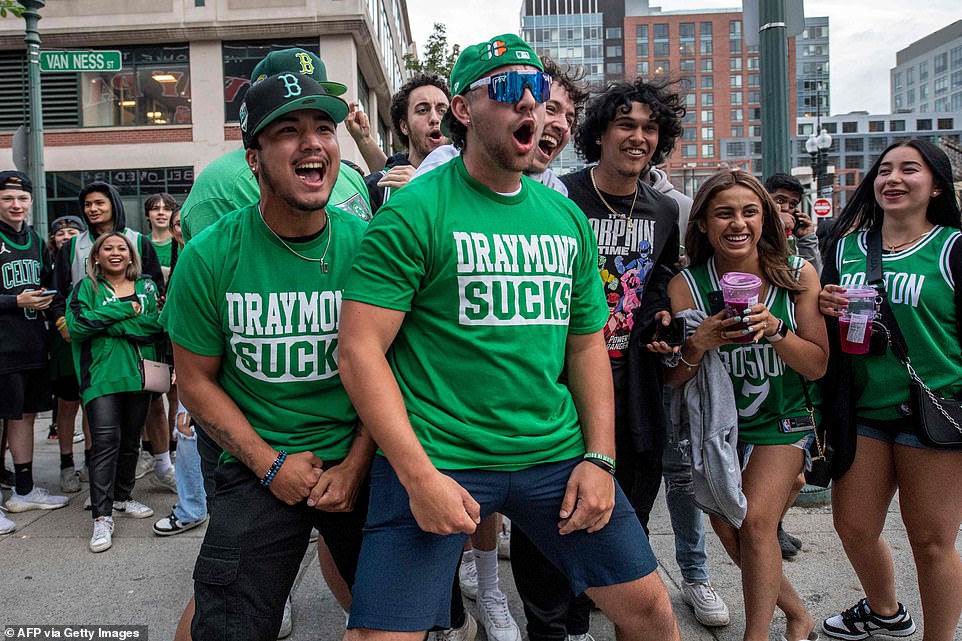 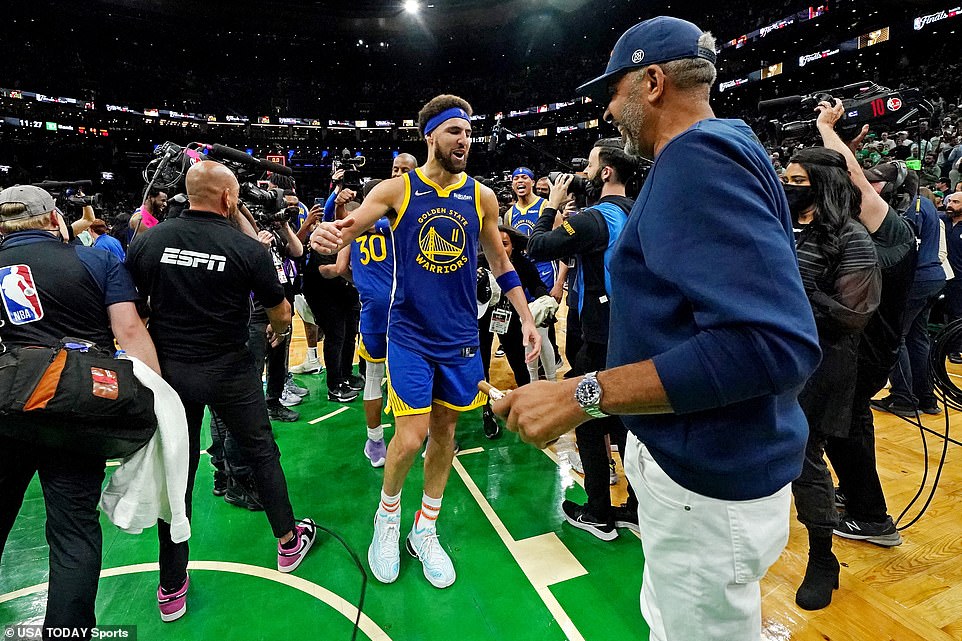 Tatum was sharp at the start, with the final five points in the opening 14-2 run. He added a third basket in the first quarter to give the Celtics a 22-16 lead, but that was their last points before getting overrun by an avalanche of 21 straight Golden State points.

That made it 37-22 early in the second quarter, leaving Celtics fans in stunned silence – which was broken later in the quarter when they even booed the home team.

The Celtics kept fighting and got the fans back into it but never got particularly close in the second half, in part because of Tatum’s passiveness and ineffectiveness. Some fans cried out for him to go get the ball, but even when he did, it just didn’t work out down the stretch.

He had a shot blocked midway through the fourth after the Celtics had climbed all the way back into single digits. Then he was called for traveling with 3:55 to go as they were running out of chances and had no time for any more mistakes.

The Celtics’ problems went beyond Tatum. Too many turnovers sometimes, too much bad execution in others. They were outscored 57-39 in the fourth quarters of Games 4 and 5, perhaps fatigued from a long playoff run.

They needed seven games to beat Milwaukee in the second round and seven more to get by Miami in the Eastern Conference finals. That put them in the NBA Finals for the first time since 2010.

But the 18th banner that would put them back on top of the league will have to wait.

Next time, perhaps Tatum and the Celtics will be better. They just weren’t good enough now. 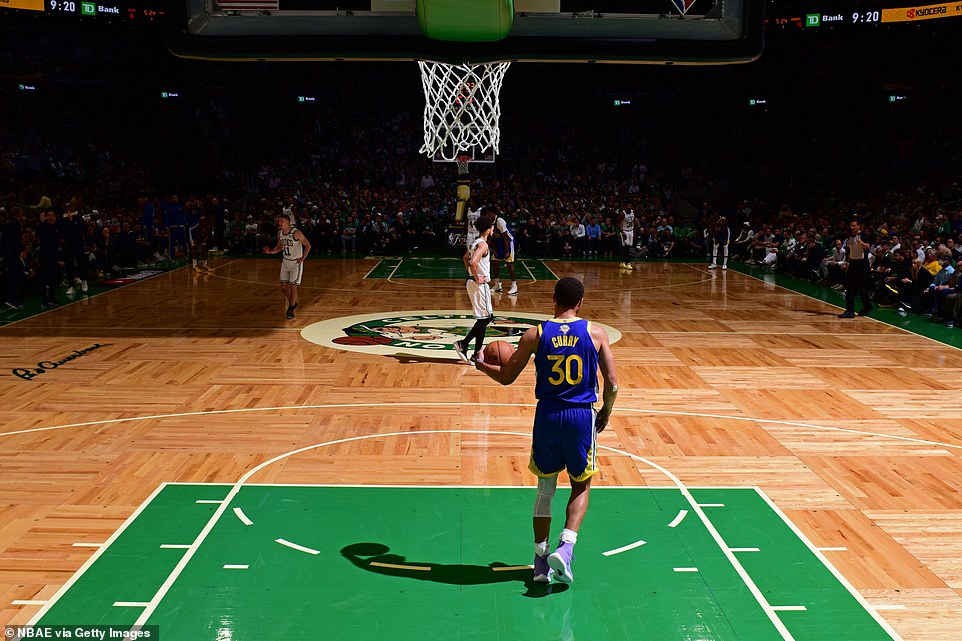 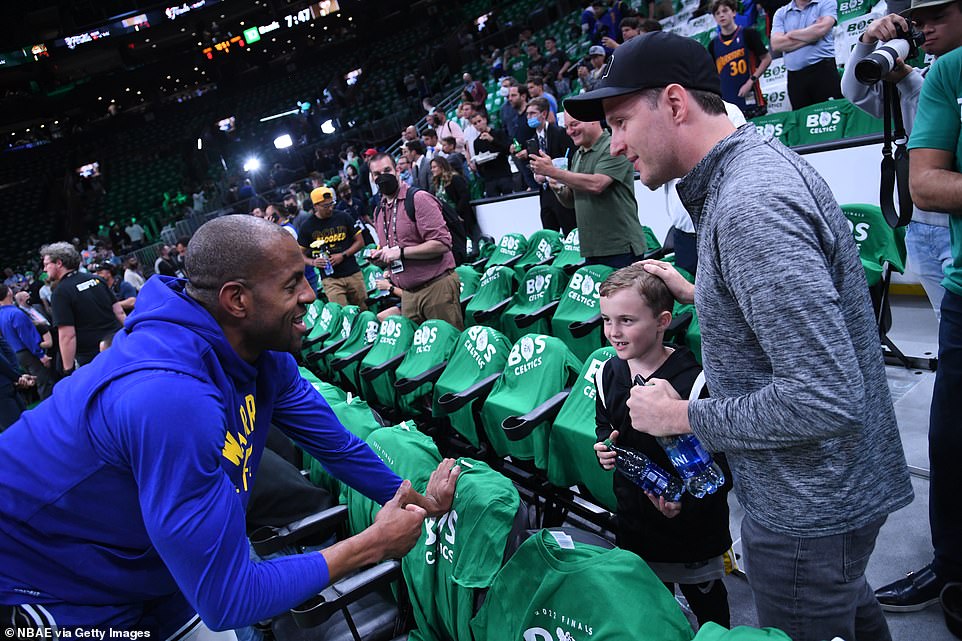 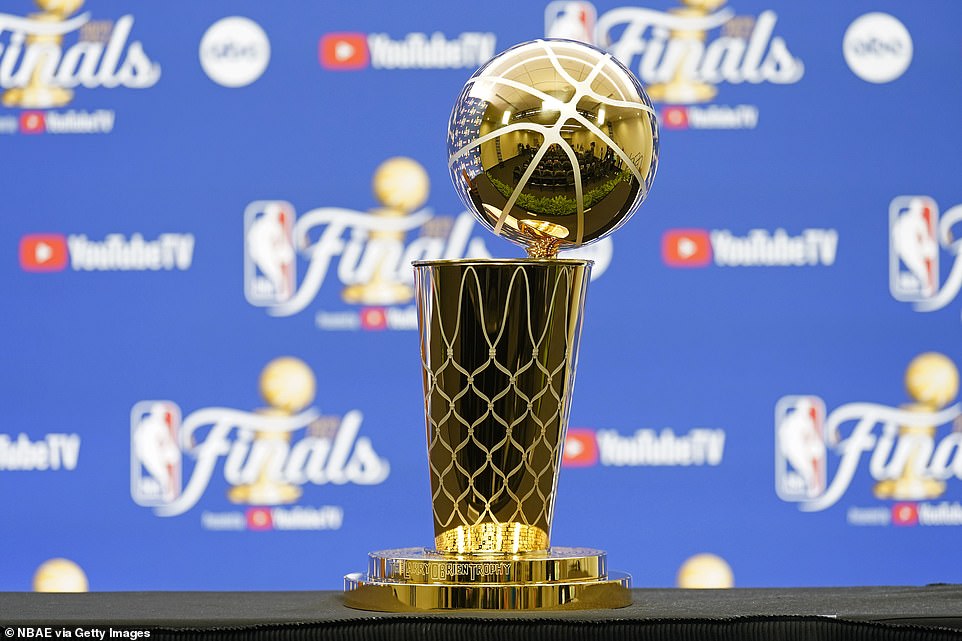 A detailed photo of the Larry O’Brien Trophy before Game 6 of the 2022 NBA Finals between the Golden State Warriors and the Boston Celtics on Thursday. The Celtics are tied with their biggest rivals, the Los Angeles Lakers, for the most titles in NBA history with 17. The Warriors have six titles, including two championships from Philadelphia before the team moved west 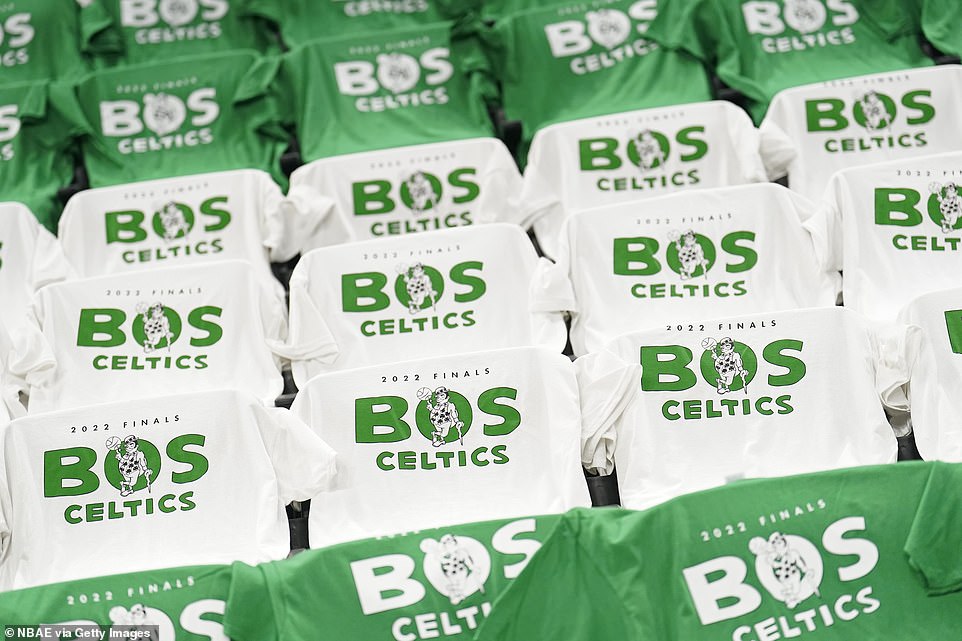 As is often the case before postseason NBA games, free t-shirts are being provided to the home fans before Game 6 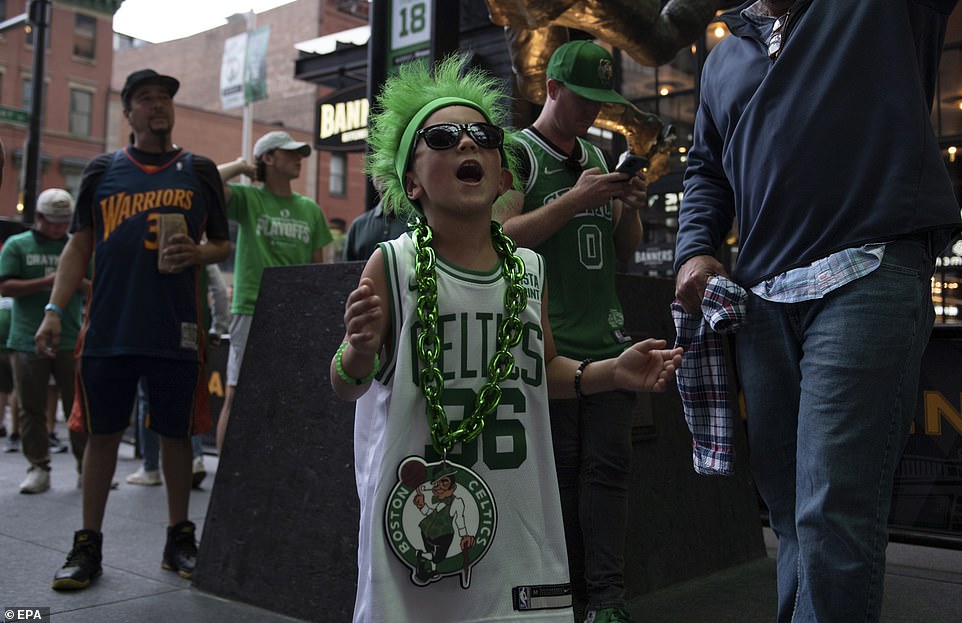 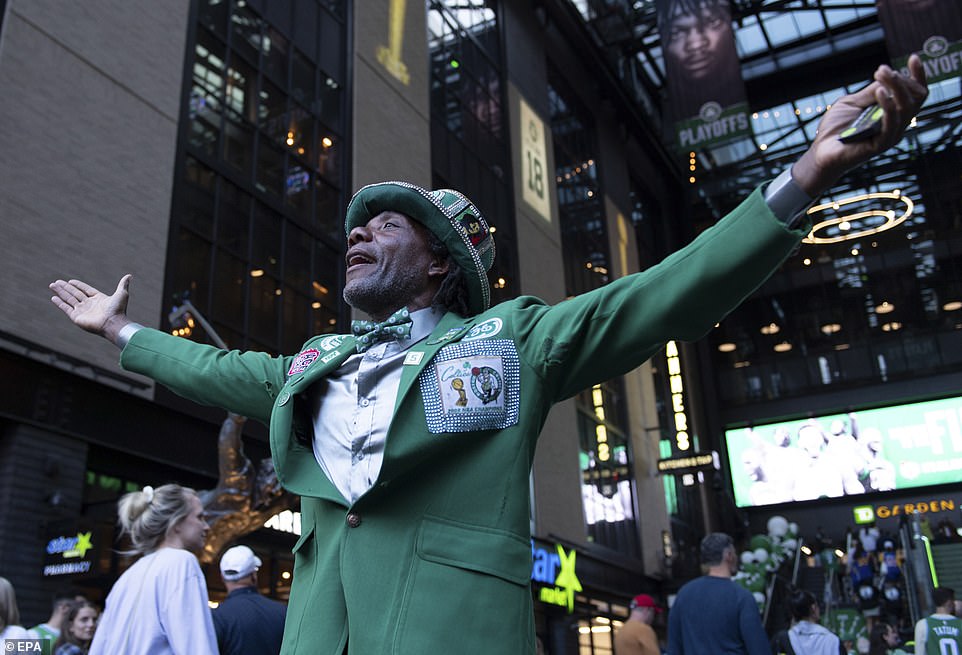 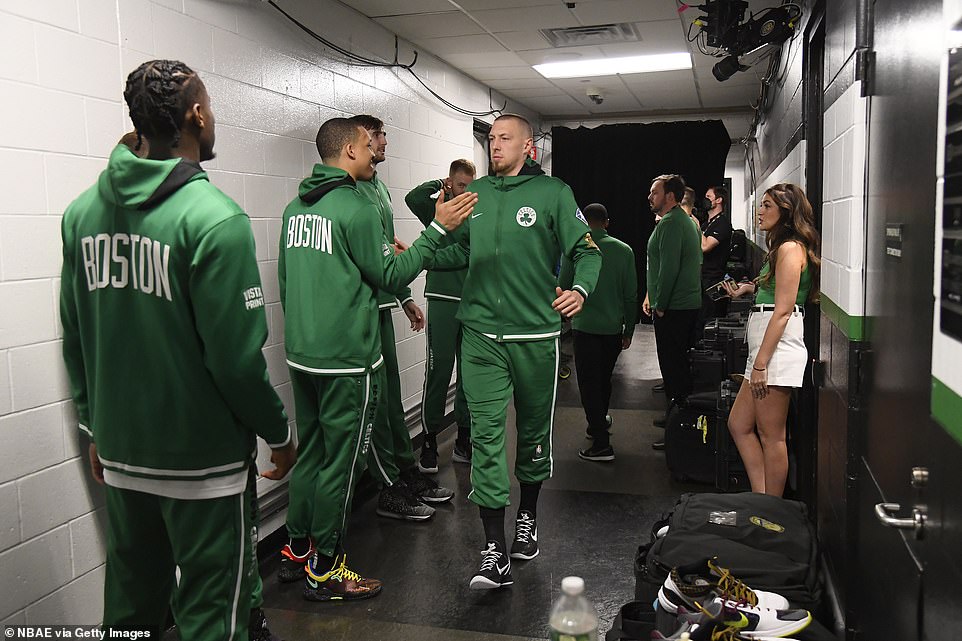 Daniel Theis #27 of the Boston Celtics high fives Grant Williams #12 prior to the game against the Golden State Warriors during Game 6 of the 2022 NBA Finals on June 16, 2022 at TD Garden in Boston 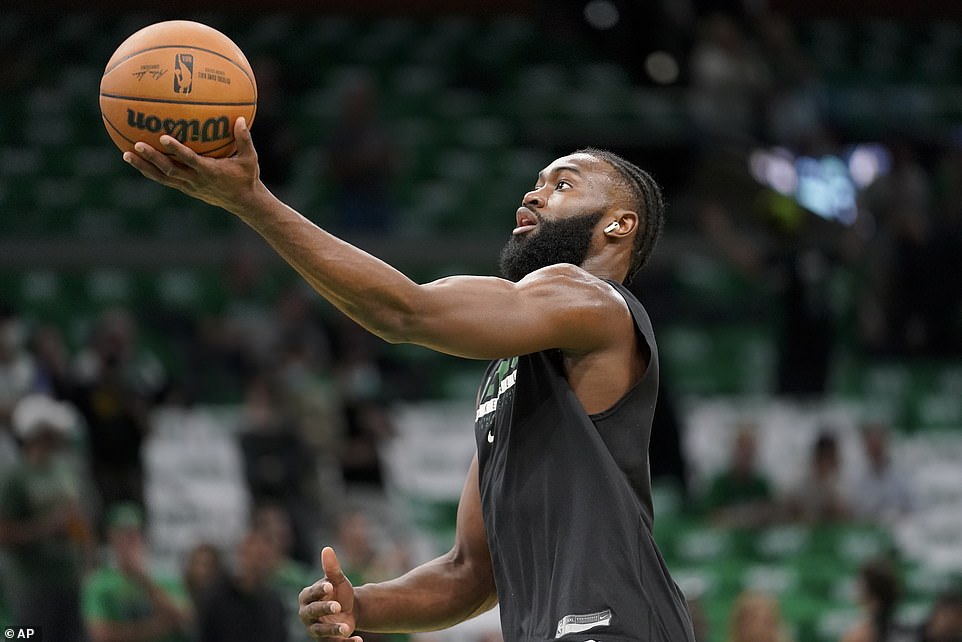 Jaylen Brown warms up before Thursday’s Game 6 in Boston. On Monday, in Game 5, Brown made only 5 of 18 field goals 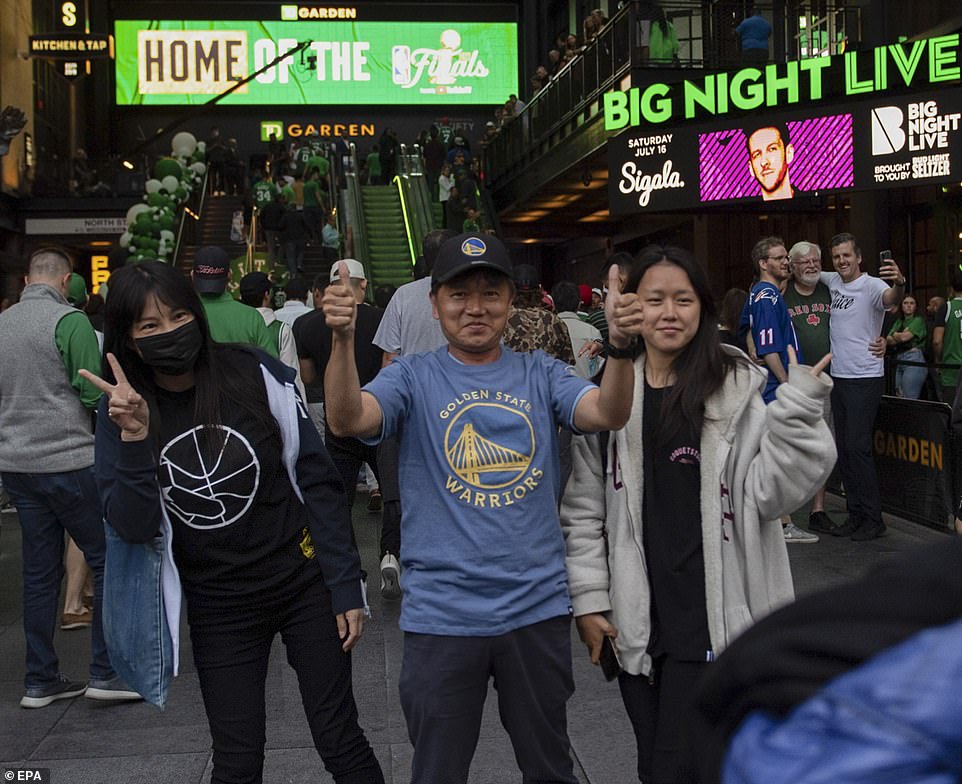 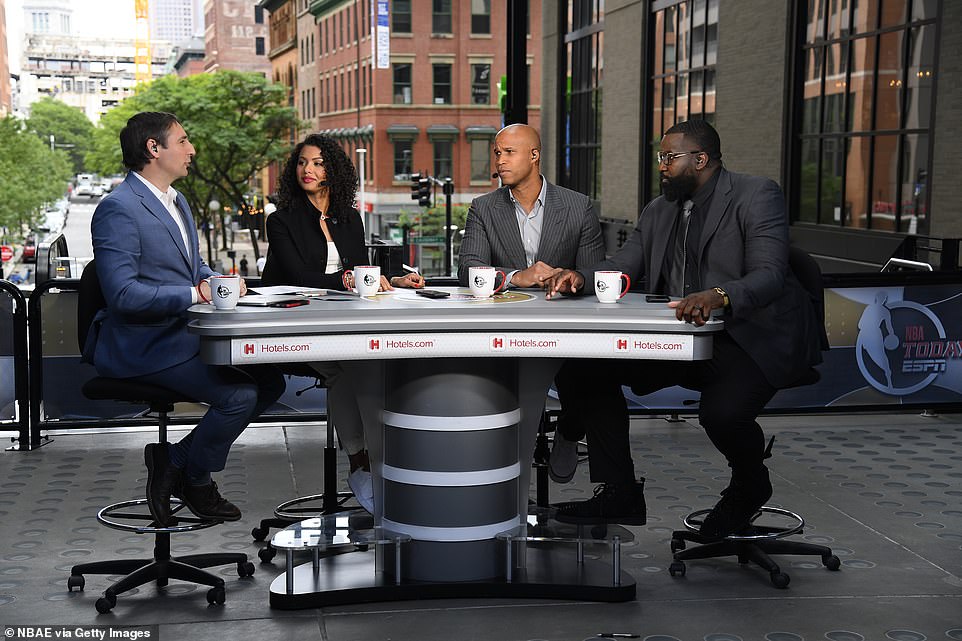 ESPN’s (from left) Zach Lowe, Malika Andrews, Richard Jefferson, and Kendrick Perkins talk on set prior to Game 6 of the 2022 NBA Finals on Thursday in Boston. Jefferson won a title with the Warriors (2016), while Perkins did so with the Celtics (2008) 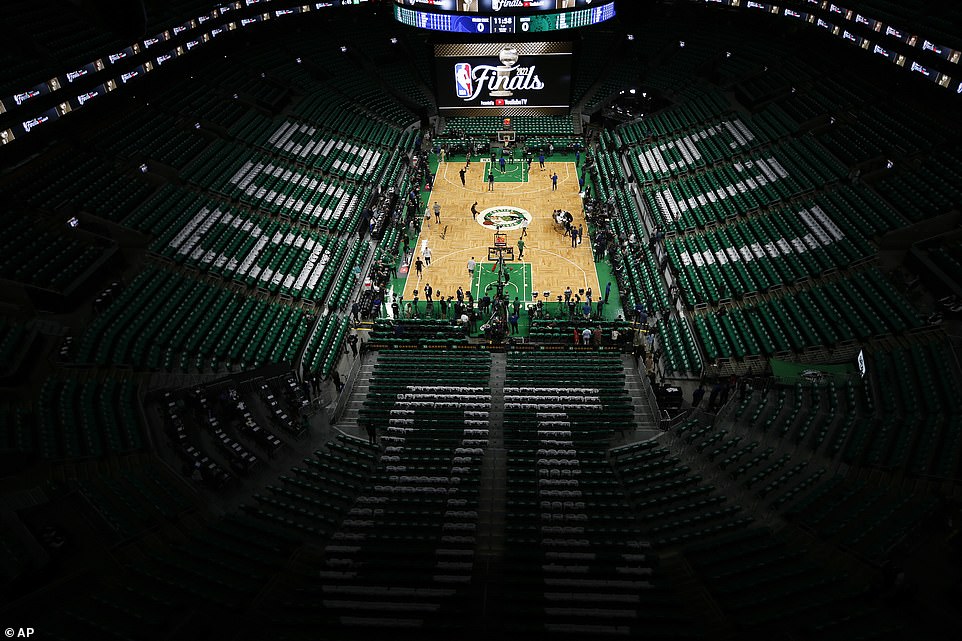 The Celtics were 20-21 at the midway point of the season under first-year coach Ime Udoka, but caught fire in March 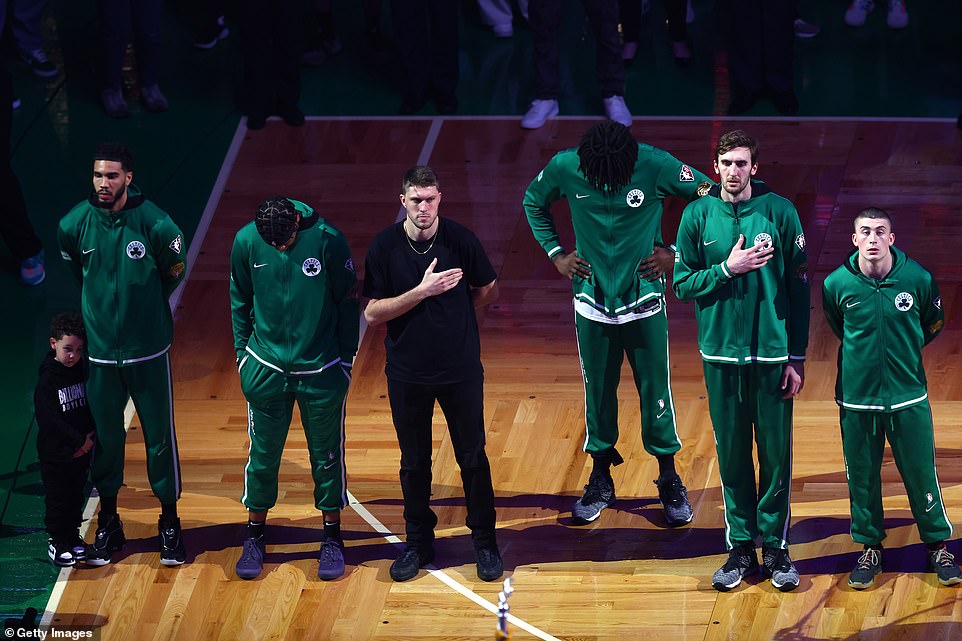 Jayson Tatum #0 of the Boston Celtics, his son, Deuce Tatum, Juwan Morgan #16 and Sam Hauser #30 observe the playing of the national anthem prior to Game Six of the 2022 NBA Finals against the Golden State Warriors