As we emerge as if from hibernation into chilly pub gardens, men are staring down at their bellies and noticing the significantly larger shadow they seem to be casting.

Did we let ourselves go that much? Surely lying on the couch eating takeaways for almost a year can’t be that bad for you? Were my T-shirts always this skintight, the waist of my jeans quite so snug?

The solution has come from an unlikely source. In a recent interview, actress Kate Winslet somehow got round to discussing her husband’s smalls and revealed that Mr Winslet — Richard Branson’s nephew Edward Abel Smith — proudly sports Spanx.

‘The Spanx men’s underpants are brilliant,’ she said. ‘My husband swears by them. He doesn’t need them. He just thinks they’re comfortable.’

Spanx founder Sara Blakely, already worth £860 million from reshaping women’s bodies, brought out a menswear range in 2010 but, until recently, you would have been hard-pressed to find a man who would admit to wearing them. Now, however, UK sales are on the rise.

‘Since we relaunched men’s Spanx earlier this year, sales have been growing week on week,’ says Kevin Wong, a buyer at Selfridges. ‘We’re becoming more comfortable wearing compression gear and performance tights while exercising, and Spanx looks and feels similar under a shirt.’ 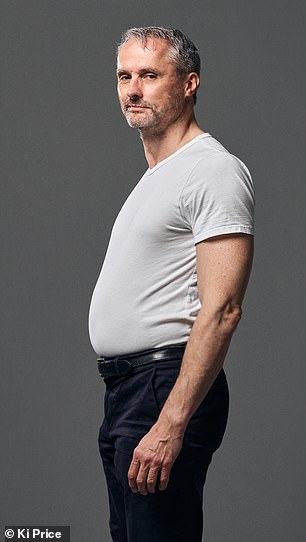 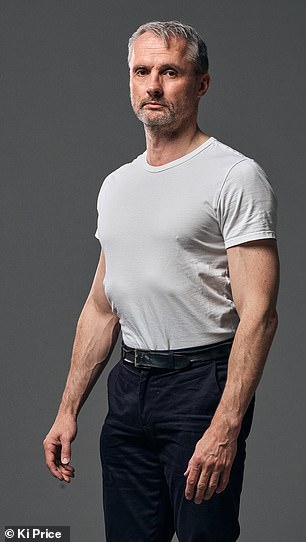 Stephen Armstrong who gained 4.4 lb in the past year, puts the latest shapewear to the test as it’s revealed sales of Spanx menswear range is on the rise in the UK. Pictured left: with no body shape underwear, right with Spanx vest under t-shirt

Uncertain if it showed, I asked my 19-year-old daughter — who avoided answering on the grounds that she refused to fat-shame anyone.

I have two options — weeks of brutal exercise coupled with a diet of salad and water; or shapewear.

There is now a bafflingly vast array of body-shaping undergarments on offer for men on websites such as Amazon, Leonisa, Selfridges and Love Shapewear.

In a bid to firm up fast, I put the latest shapewear to the test . . .

The LaLaAreal, you will notice, includes the words sauna and sweat in its name for a very good reason. Saunas may conjure up the idea of steam, heat, sweat and innocent Swedes frolicking naked. The LaLaAreal does not come with innocent Swedes. The rest? Absolutely. 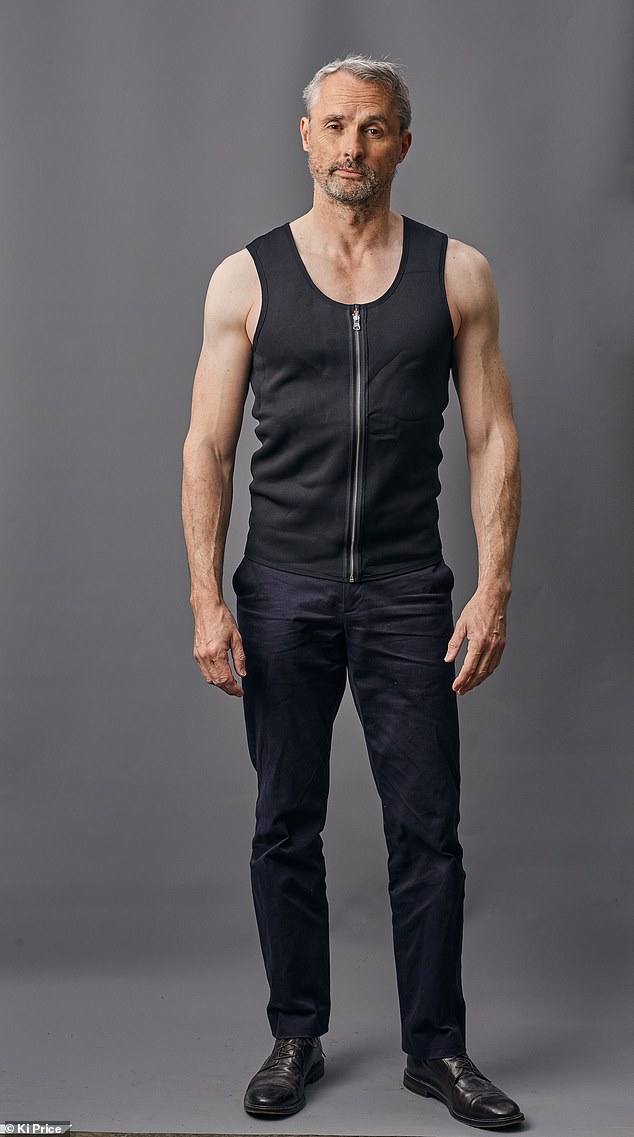 It is designed to correct posture, increase body temperature and produce sweating and fat burning to help lose weight. It does the former with an internal corset that brooks no argument.

If it wasn’t for more maddeningly complicated hooks and eyes, this would be a cunning idea. Just for fun, I took it out for a brisk walk that produced so many rivulets of perspiration, I looked ill and angry.3/5 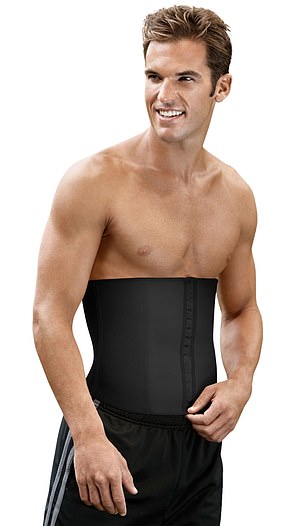 It’s a corset. Use the words ‘waist shaper’ if you want but if your garment does up with a set of metal fasteners known as corset hooks and eyes, you are not fooling anyone.

Men wore full-on corsets in the early 1800s to create a smooth silhouette beneath fashionably form-fitting jackets. The modern-day take is rather comfier but it’s fiendishly difficult to get on. You start doing up the hooks and eyes at the top but while you work your way down, endeavouring to persuade the mid-rankers to do their duty, the top ones sneak apart.

The last time I was this furious with a piece of clothing was as a student in the 1980s when undoing the poppers on my girlfriend’s leotard-like body.

Once I secured everything in place for the waist shaper, however, it was satisfyingly unyielding. So much so that sitting down was a challenge and I understood why Victorian ladies were so prone to swooning.

This is an efficient flesh restrainer but, unless you have a very understanding partner or a personal valet, life is too short.2/5 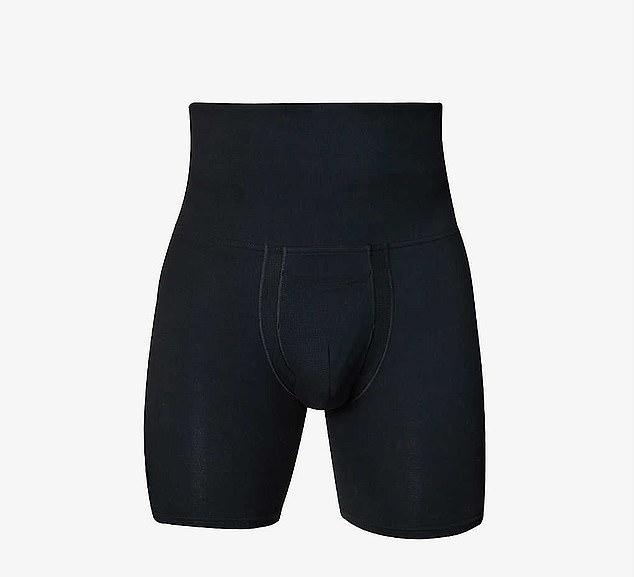 These pants have a structured pouch at the centre front that appears, at first glance, to be what you might euphemistically call a gentleman’s enhancer. Thankfully, it’s just there for ‘support and lift’ (though there is an entire sub-section of the shapewear market that does indeed enhance).

The power-sculpting waistband is a kind of fitted cummerbund, but it comes up high on the waist, which makes the whole thing feel a little too intrusive. It’s hard to see how you would wear it under a T-shirt because it’s likely to show through.

I can see the pants working beneath a waistcoat or if you are in a pub garden on a chilly day in a sweater but, if you are in thinner fabrics, your secret will probably be out.

That said, once I had stopped the word ‘nappy’ swimming around my head, I could see it was a step up from the mid-rise regular boxers which, while cheaper at £34, sit lower down on the waist and could easily create an awkward bulge if there’s lots of tummy to work with.3/5 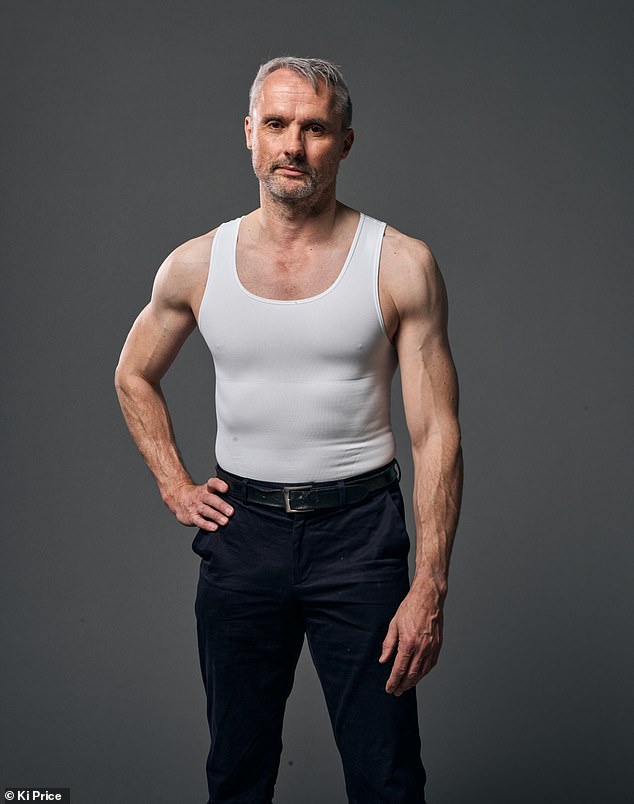 This looked like a doll’s vest when pulled out of the packet but it expanded to appear just like a standard summer singlet. The elastic body is thicker than your standard vest, so it’s a little too obvious under a T-shirt, but worn by itself or under an open shirt, I started to get the picture. No need to suck the belly in and it’s so tightly wrapped you get a little pec push-up.

Out of everything I tested, I was the least self-conscious in this. There was almost no way anyone could tell I was wearing shapewear. It would be hot under other clothing but it felt more natural than the high-waisted pants. 4/5 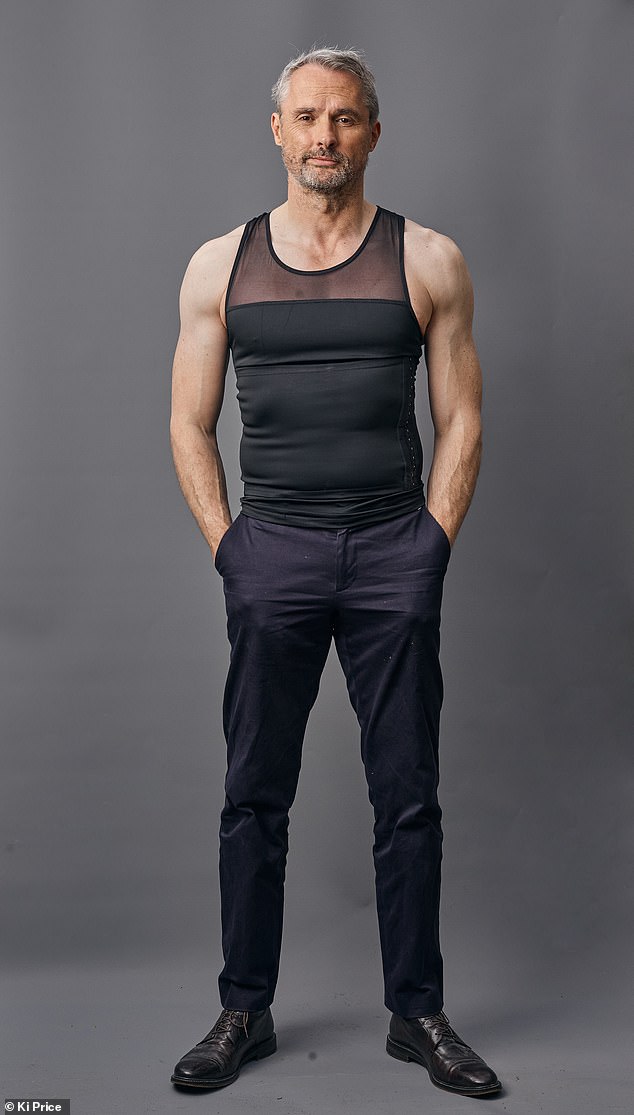 The Chumian is something of a brutal puzzle. It is a compression vest, which means that fitting even the large size over my head proved to be as difficult as hauling Winnie the Pooh out of Rabbit’s burrow.

Having poked my neck and arms through, I then had the equivalent of an elastic roller blind under my chin, which eventually responded to some desperate wrangling downwards — and then, dear Lord, did it compress.

The thing has two light steel ‘bones’ in the back, which shows how determined it is to hold things in place. As if that wasn’t enough, there’s a corset-meets-cummerbund panel that you stretch across your midriff as if to bully it into staying flat.

The product description insists this is ‘suitable for any occasion’ and especially mentions dating and yoga. Yoga? I have never felt less bendy in my life. 4/5 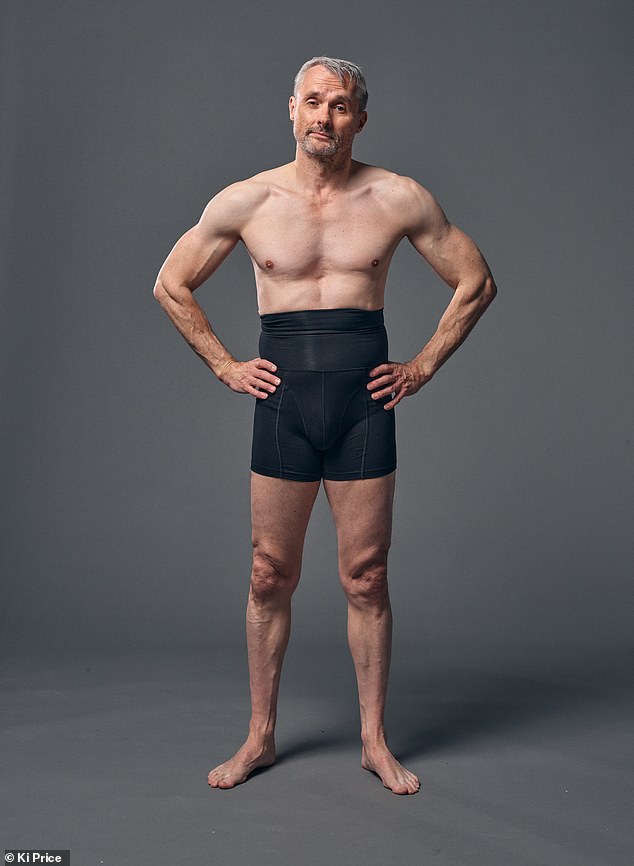 This brings a whole new dimension to shapewear, which grew from fabric technology developed in response to sports injury and orthopaedic support.

I have had a bad back for years and, although some hard work with a physio has allowed me to stop moving gingerly, I’m still careful even if doing something as basic as walking. The Blackspade/Spanx vest combo allowed me to forget about that as it wrapped my core with sturdy support. It even let me have a bit of a kitchen disco, which revolted my daughter more than the idea of her dad sporting shapewear.

Wearing the boxers for an entire day felt a bit odd. The firm pressure on my stomach played havoc with my digestion and, this perhaps being the point, made me feel strangely full, as if I’d stuffed my face and my trousers were too tight.

They required a little maintenance, too, with the high waist attempting to spring back down like a roll-top desk every time I bent over. But while in place, mountains became foothills and foothills became rolling prairie.

Would I wear it daily? No. Would I wear it if I planned to take my clothes off in front of anyone? Definitely not. But if I wanted to score a few points at a midlife couples barbecue? Oh yes. 4/5 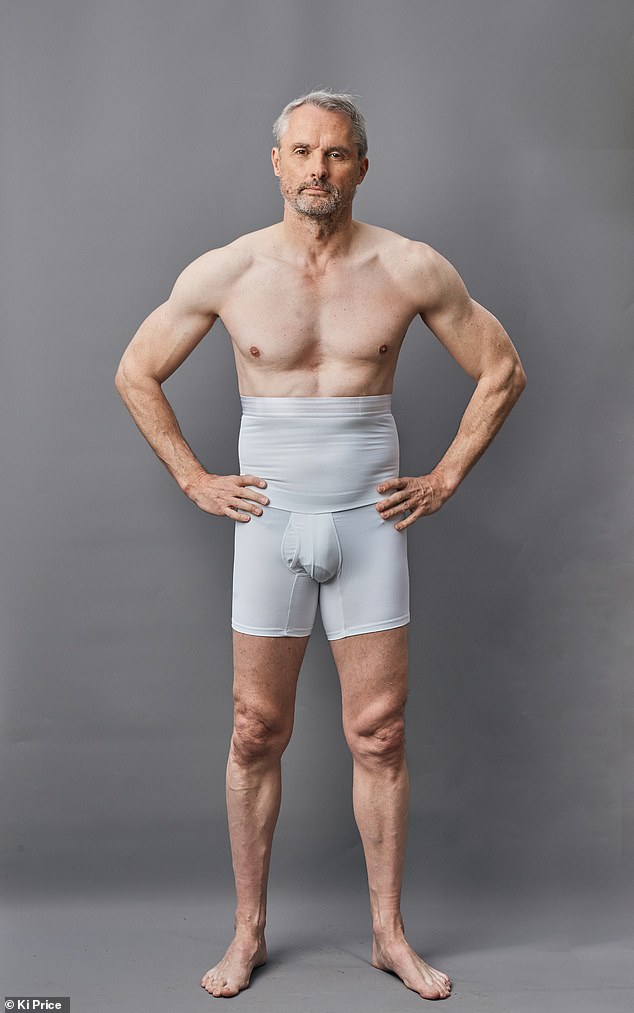 Once strapped in, my belly was under control and I could feel a warmth around my nether regions that was either the fat burning sauna sweating or a new peccadillo that I didn’t want to think about.

Just for fun I walked past some steel cutlery — but the expected flurry of flying forks didn’t materialise.

If there are magnets in these pants, they are not strong enough to navigate home with after the pub.

Unlike the LaLaAreal, the sauna effects were gentle enough — I could wear a pair and go to the shops without glowing pink and scaring old ladies. If I was serious about losing the belly instead of just hiding it, I would wear these and the vest and go running, albeit not very far.

Sadly, however, I chose to wear them without the vest to the pub because they were invisible under my T-shirt.

It is that kind of corner-cutting that got me here in the first place.3/5