Stephen A. Smith leads the calls from NFL fans for LA Chargers head coach Brandon Staley to be fired as there ‘is no coming back’ from spectacular playoffs collapse… as the ESPN analyst jokingly congratulates Sean Payton on securing the job

Stephen A. Smith led the claims that LA Chargers head coach Brandon Staley can’t keep his job after they imploded against the Jacksonville Jaguars Saturday night.

The Jaguars spectacularly beat the Chargers in their wild card game after rallying from 27-0 to clinch a 31-30 victory in a thrilling contest.

It was the Chargers’ first playoff appearance since 2018 but after stumbling to one of the largest collapses in NFL postseason history, Staley’s future in Los Angeles is in doubt.

Stephen A. Smith led the claims that the head coach can’t keep his job after the defeat

ESPN analyst Smith insisted there was ‘no coming back’ for Staley following the humiliating defeat as NFL fans claimed the loss could ‘seal the deal’ on his firing.

Smith joked that Sean Payton already had the job wrapped up as he tweeted: ‘Congratulations @SeanPayton. Welcome to Los Angeles as the new coach is the @chargers.

‘There is no way Brandon Staley can keep his job after blowing this lead. There’s no coming back from this for him!’

Other NFL fans echoed Smith’s thoughts as they claimed Staley had served up a ‘disaster.’ 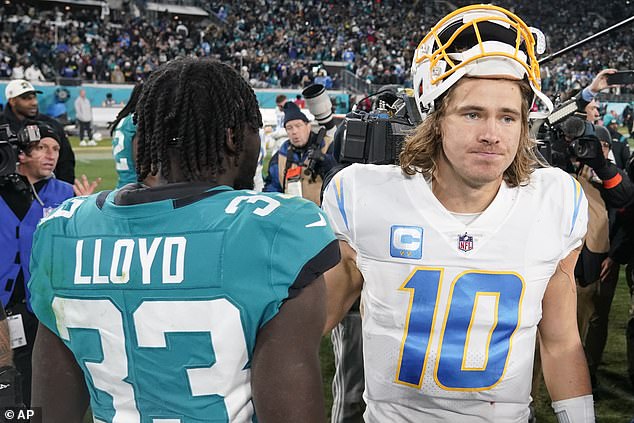 One wrote: ‘We may never see a two-week masterpiece of Disaster Coaching better than what Brandon Staley just served up. Godfather into Godfather Part II.’ 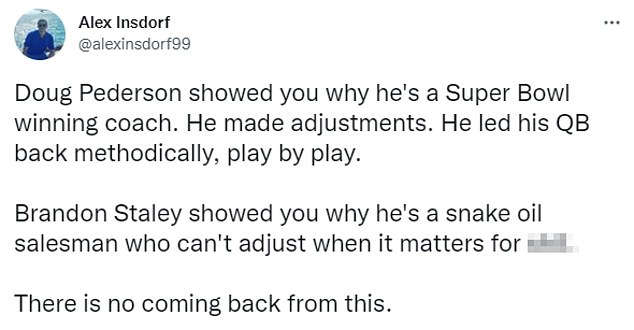 Others backed Smith’s claim that Staley could be out the door, insisting that he can’t survive the loss.

One posted: ‘What an end. Justin Herbert has deserved better than Brandon Staley for last 2 years. This loss might get seal the deal.’

‘I don’t think Brandon Staley survives this,’ another added. ‘If word on the street is accurate, it might be over for him. Wow.’

Another ripped into the Chargers head coach, claiming he had lost the team and likening him to a ‘kid playing Madden’.

They wrote: ‘For everyone asking why I think so poorly of Brandon Staley and why I’ve been adamant he will be fired and should be…THIS He has lost his team. Hell, he picked up the helmet for Bosa, then watched him slam it again. Like I’ve said, he’s a kid playing Madden, not a HC.’

Others also claimed Staley could be out the door, insisting that he can’t survive the loss

Meanwhile, some saw the funny side as they joked that Staley could be jetting off to Thailand to follow in the footsteps of Kliff Kingsbury.

The recently fired Cardinals coach has reportedly bought a one-way flight to Thailand and is telling teams he has no interest in taking a new job.

Now, NFL fans humorously claimed that Staley could be joining him in a self-enforced sabbatical.

Another chimed in, adding: ‘Kliff Kingsbury and Brandon Staley discussing the Dollar to Baht conversion rate.’

However, one insisted that not all the blame should fall on Staley, adding that the owners, the Spanos family, were also at fault.

‘Brandon Staley is rightfully going to catch all the fire,’ they posted. ‘But let’s not lose sight that the Spanos family is the real curse to this franchise.’

One insisted that not all the blame is on Staley, adding that the owners were also at fault