A mother was left with gruesome infected scars after a botched ‘mummy makeover’ in Turkey.

Tracy Marriott, 45, flew to Istanbul to have a cut-price tummy tuck and boob job which she hoped would improve her self-confidence.

The stay-at-home mother-of-three, from Eastbourne, East Sussex, paid about a third of the price the surgeries would have cost in Britain.

Her dress size went down two sizes, from 18 to 14, and her 36DD breasts were increased to a 36FF following the procedures — but they were far from a success.

She woke up ‘in a lot of pain’ and was ‘having trouble breathing’, leaving her bed-bound in the foreign hospital for five days.

‘I felt like I was dying and I wouldn’t make it back home,’ she said. ‘My mum video called me whilst I was in the hospital and she said she could barely recognise me, I looked so unwell.’

By the time she mustered up the strength to get on a flight home, the scars on her nipples had become filled with pus and turned green.

There has been a surge in Britons travelling abroad for cosmetic surgery, particularly during the pandemic.

Tracy Marriott, 45, flew to Istanbul to have a cut-price tummy tuck and boob job which she hoped would improve her self-confidence

Her dress size went down two sizes, from 18 to 14, but she was left with bad scarring which became infected 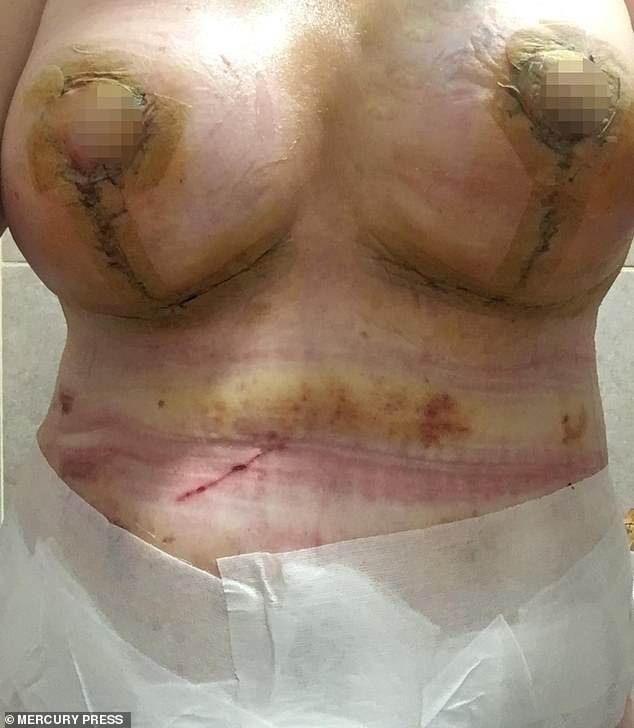 Her 36DD breasts were increased to a 36FF, but the scars on her nipples became filled with pus and turned green.

Mrs Marriot was told by Turkish doctors that her scarring was normal and just a sign ‘my body was healing’.

But British doctors revealed that her wounds were not stitched properly, which may have led to her breasts and tummy becoming infected.

Mrs Marriot said: ‘I immediately went to the NHS who couldn’t believe the stitching, the type of stitches and how it had been done.’

She was admitted to hospital and put on an IV drip in case the infection had spread to her bloodstream, where it can turn deadly.

The body is vulnerable to infections after surgery, particularly if equipment is not sterilised properly.

Bacteria from the skin, the operating room, surgeon’s hands or other surfaces can be transferred into open wounds.

Days after returning home, Mrs Marriot revealed that holes starting appearing on her breasts that would cause ‘stuff to ooze out’.

She has since had her procedure revised in Belgium and says she now feels much better. ‘I guess the saying is true – you get what you pay for,’ she added. 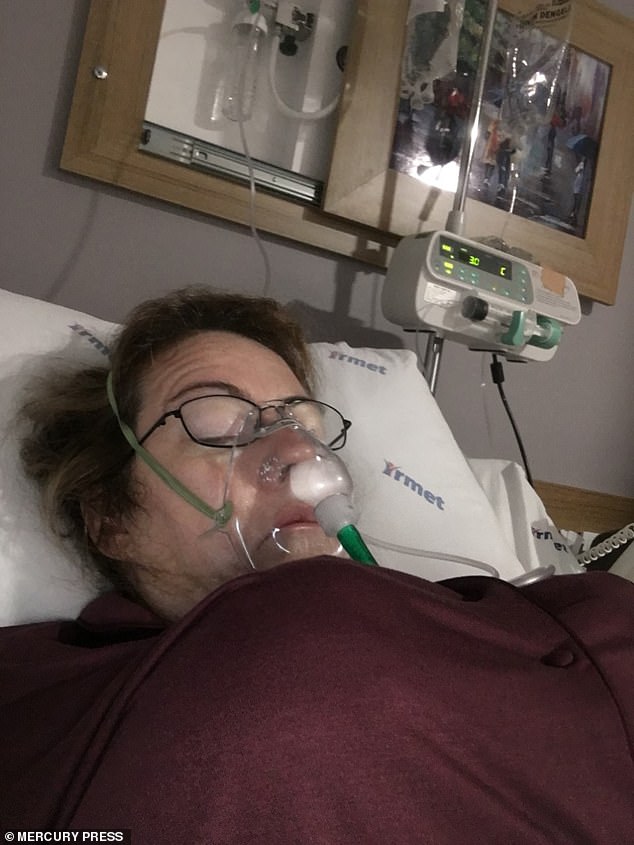 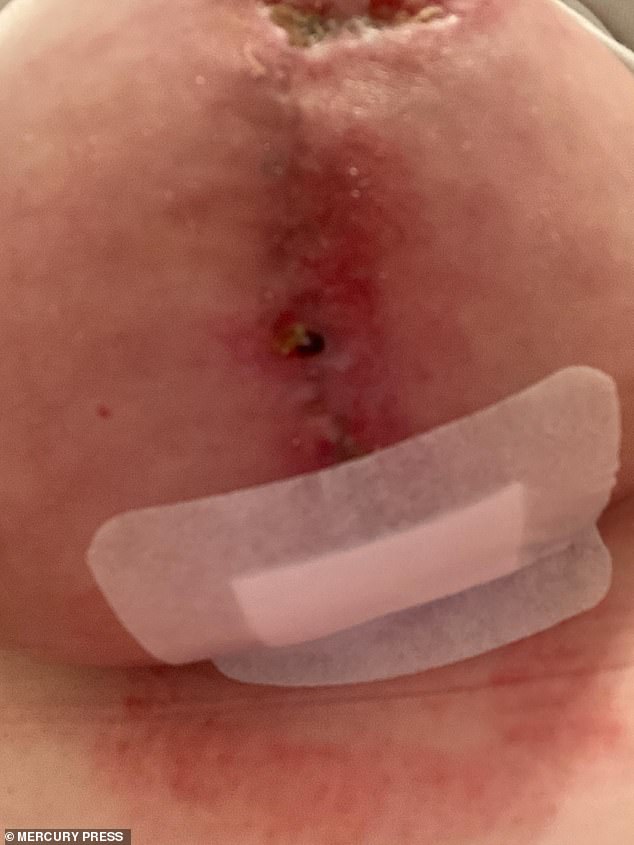 British doctors revealed that her wounds were not stitched properly, which may have led to her breasts becoming infected (shown, her undercarriage) 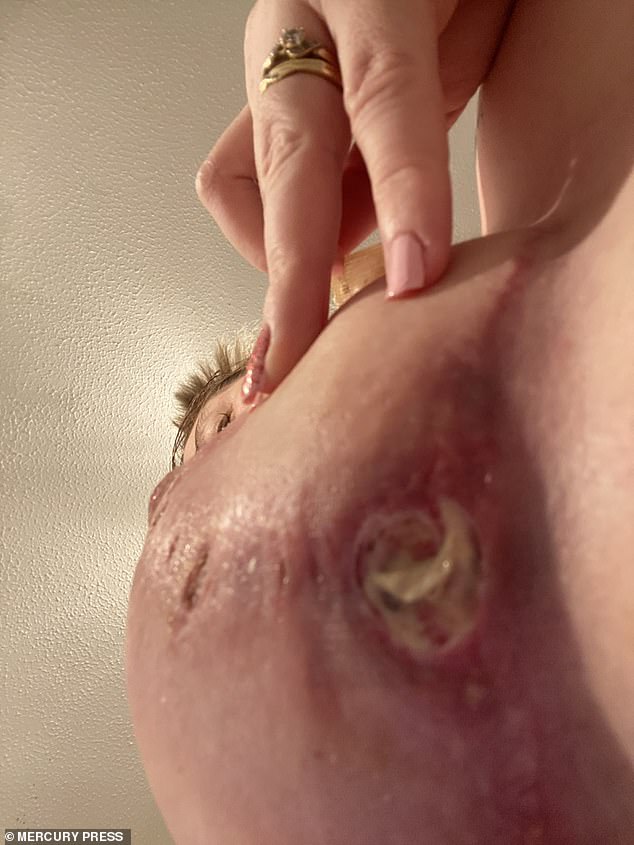 Days after returning home, Mrs Marriot revealed that holes starting appearing on her breasts that would cause ‘stuff to ooze out’

Mrs Marriot is now warning others who are considering cheap cosmetic procedures abroad.

‘The procedure was something that I’ve always wanted – I had a bit of a saggy belly after having three kids and wanted a tummy tuck as well as a boob job,’ she said.

‘I thought that I had done a lot of research, a couple of friends had recommended the same surgeon in Turkey. It was the price that swayed my decision more anything.

‘It was £5,000 for the combined surgery and the plan was to fly out there and stay in the hospital for five days but I ended up having to book an additional flight because I was so unwell and my husband, Dan, flew out too to help me come home.

‘After the surgery, I was pretty much out of it and I thought I was going to die.’

There has been a rise in the number of Britons flying abroad for cosmetic surgeries in recent years.

Katie Price and Geordie Shore star Chloe Ferry are among the celebrities who have admitted to using cheap clinics in Turkey.

But the practice is becoming in increasingly popular, and so is the number of botched surgeries.

Turkey has established itself as the cheap cosmetic surgery capital of the world, bragging about boob jobs being half the price as ones performed in the UK.

Working from home may be to blame for a rise in Britons being left botched from cheap cosmetic surgery abroad, experts say.

This was up 44 per cent on the year before, when the pandemic first kicked off and foreign holidays were effectively scrapped for staycations.

The British Association of Aesthetic Plastic Surgeons (BAAPS), which uncovered the figures, is calling for No10 to crackdown on foreign surgery.

It wants ministers to make travel insurance compulsory for anyone who chooses to undergo trips for cosmetic procedures.

The BAAPS claimed the surge in demand for cosmetic surgery is down to the lack of local surgery available and ‘enticement’ of cheap foreign deals.

It also blamed the uptick on the so-called ‘Zoom Boom’ — the demand for aesthetic procedures driven by increased awareness of one’s appearance on screen.

Throughout the pandemic, surgeons noted more patients citing their appearance on video calls as reasons for their dissatisfaction with their bodies.

Noses and wrinkles seemed to be the most common complaints generated by the phenomenon, dubbed ‘Zoom Dysmorphia’.

Experts say video calls can distort people’s appearance from how they really look — creating the illusion of a wider face and a broader nose.