EXPRESS INFORMER > Sports > State of Origin: Cameron Munster shows his worth for Queensland in win over NSW

So THIS is why Cameron Munster is the most sought-after talent in the NRL! Melbourne Storm star puts in Man of the Match display to help Queensland to victory in Game One – as five-eighth cuts Blues’ defence to ribbons with INCREDIBLE run

Cameron Munster produced three famous State of Origin plays to lead Queensland to a shock 16-10 upset over NSW in the series opener at Accor Stadium.

In a return to the famed Origin grind after years of blowouts, Munster was at his brilliant best for the Maroons as they jumped to a 16-4 lead before holding out the fast-finishing Blues late.

With four debutants in their side, Queensland were forced to overcome an ankle injury which sidelined winger Xavier Coates in the first half while newcomer Jeremiah Nanai battled through a similar issue.

It was the Maroons’ first win in Sydney since 2017, when Johnathan Thurston nailed a last-minute conversion in his last series beside Cameron Smith and Billy Slater.

And with those three greats on Queensland’s coaching staff on Wednesday night, there was plenty of inspiration for Munster & Co, who delivered a performance to be remembered for years to come in front of 80,000 fans.

The Melbourne Storm gun was tenacious in defence, landing a handful of steals, but also demonstrated his fleet of foot with his attacking prowess to cut through the Blues’ defence. 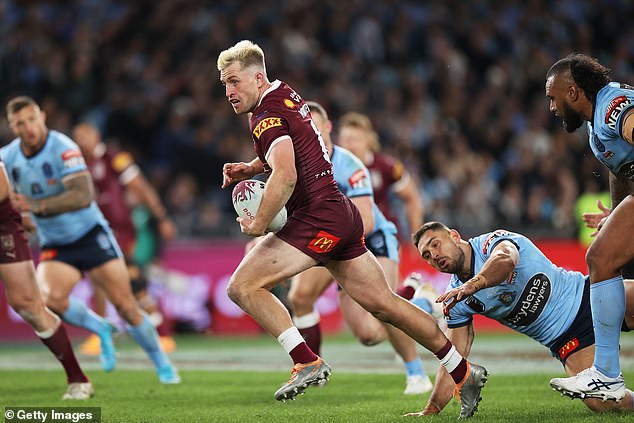 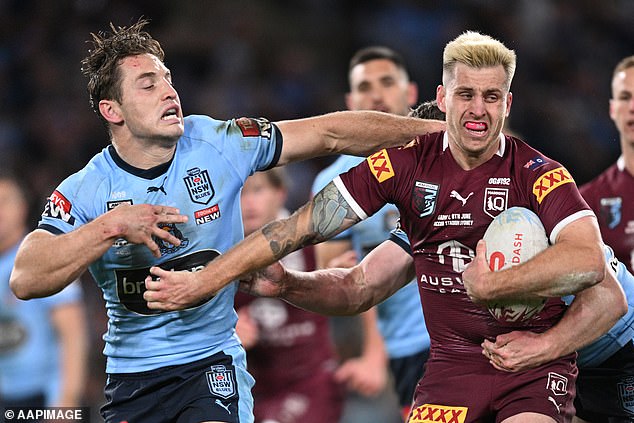 Munster played a crucial role in Daly Cherry-Evans’ score after the break, picking up the ball in his own half before fending off a host of tackles and bursting through the line, dragging his team to just over 10 metres from the tryline.

Cherry-Evans scored in the same set of plays to extend the Maroons’ lead.

Rookie Pat Carrigan swung the momentum of the match off the bench and fellow debutant Reuben Cotter made 49 tackles while halves Cherry-Evans and Munster played direct in attack.

Kalyn Ponga had one of his best nights in Origin at fullback, playing a role in two Maroons tries and pulling off a last-play tackle under the posts on Isaah Yeo on the siren. 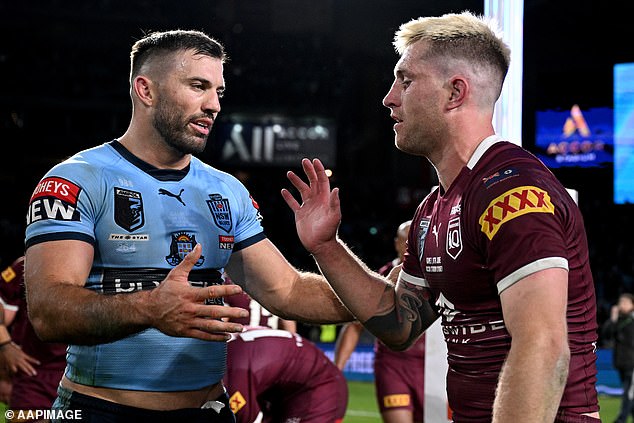 In contrast the Blues were frantic, desperately chasing points in the second half as they struggled to win the ruck and halfback Nathan Cleary admitted they tried to move the ball around too much.

‘It’s always tough. If you lose the first one you are up against it,’ Fittler said.

‘But winning the game there last year at Suncorp gives us a lot of confidence.’

Meanwhile debate is likely to follow the independent doctor’s decision to allow NSW’s Isaah Yeo to play on after head contact in the first tackle.

The Penrith lock appeared to stagger back after the hit on Maroons prop Josh Papalii, but he was assessed on field and allowed to stay on.