A Starbucks employee has ranted about how a very picky order consisting of thirteen modifications made him ‘wanna quit’ his job – and now other Starbucks baristas are saying it’s part of a bigger problem of Gen Z ordering trendy drinks they find on TikTok.

US-based barista Josie took to Twitter to vent his frustration over an incredibly complicated Venti Caramel Ribbon Crunch Frappuccino order, which a demanding customer named Edward had placed in Van Nuys, California on May 1.

A photo of the plastic cup shows that the customer requested 13 add-ons and changes to the drink, including extra caramel drizzle, seven pumps of caramel sauce, extra ice, extra cinnamon dolce topping, and heavy cream – all of which makes the standard drink take longer to make.

The post has prompted other Starbucks employees to share similarly complex and torturous drink orders, with some complaining that trendy ‘TikTok drinks’ are to blame.

What’s more, they’re saying these drinks aren’t just a hassle for Starbucks employees to make, but that they also make lines move slower and contribute to longer wait times for other customers. 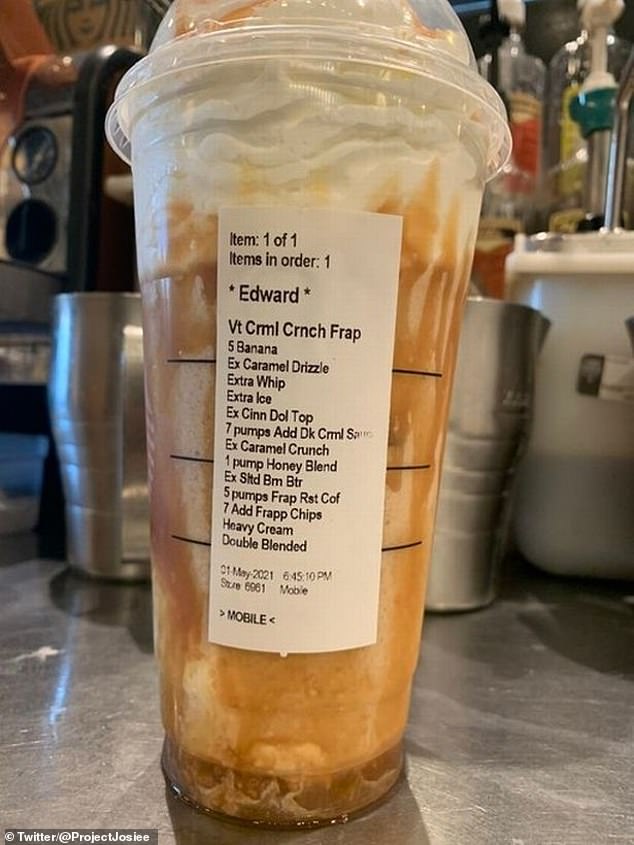 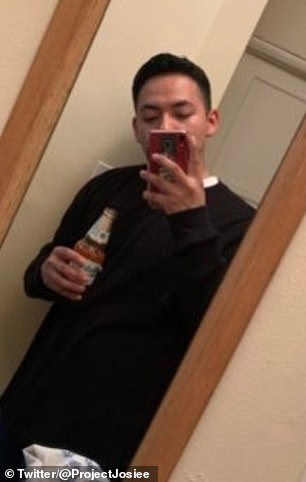 ‘On today’s episode of why I wanna quit my job,’ Josie tweeted, sharing a photo of the cup.

A traditional Caramel Ribbon Crunch Frappuccino is made with coffee, milk, ice and caramel syrup, which are blended and topped with a layer of dark caramel sauce, whipped cream, caramel drizzle, and a crunchy caramel-sugar topping.

‘Geez. That some high maintenance right there. I’m guessing Edward is single,’ wrote one commenter, while a second joked: ‘I knew it had to be an app order. No one would order that out loud making eye contact.’

Soon, other baristas across the globe were also shared screengrabs of orders from fussy customers they’ve also had the displeasure of having to deal with.

One Starbucks barista shared a snap of a Green Tea Creme Frappuccino with 29 additional changes, writing: ‘This order comes in every other week.’ 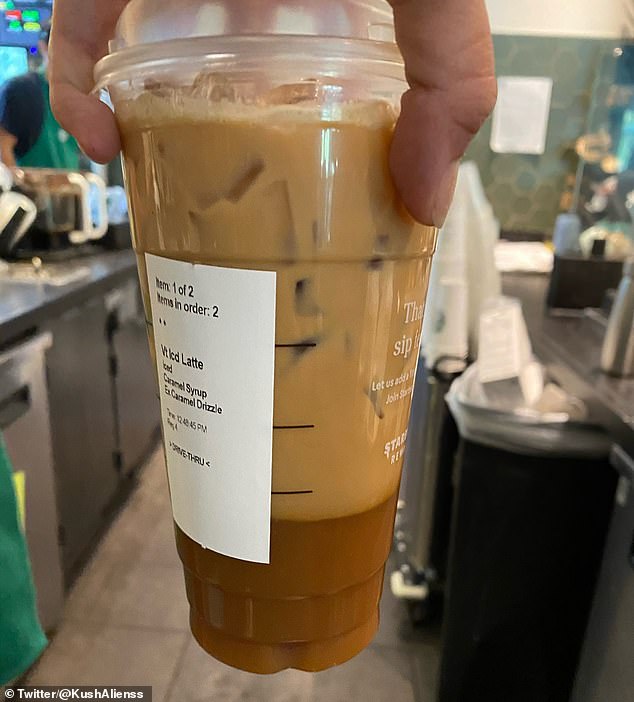 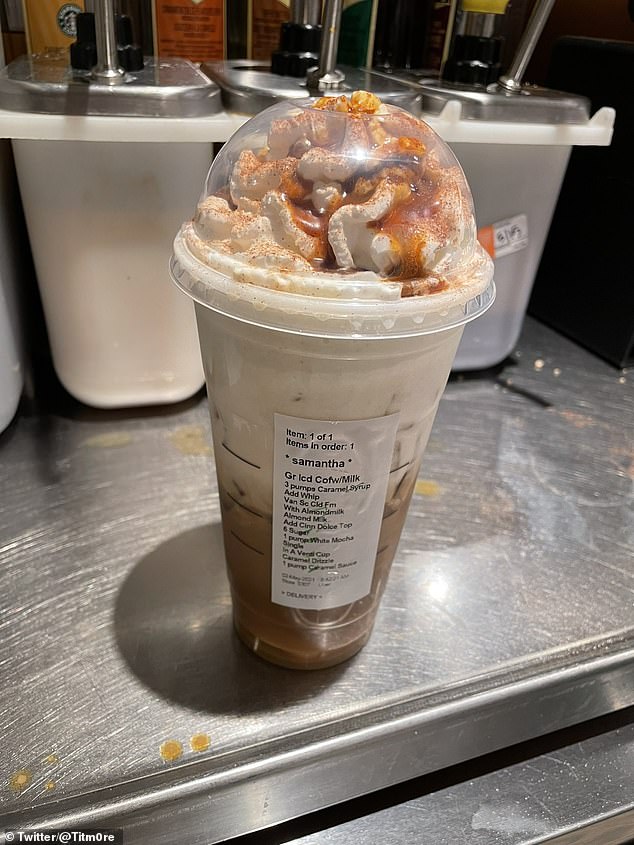 One woman, from California, shared an image a drink with 11 customizations 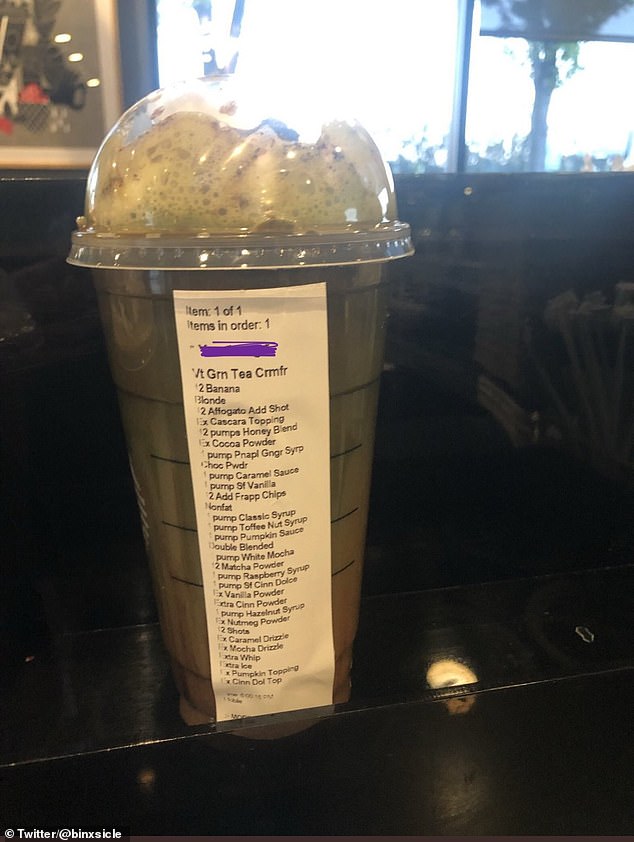 A particularly shocking Green Tea Creme Frappuccino order came with 29 changes. Worse still, the barista said, ‘This order comes in every other week’ 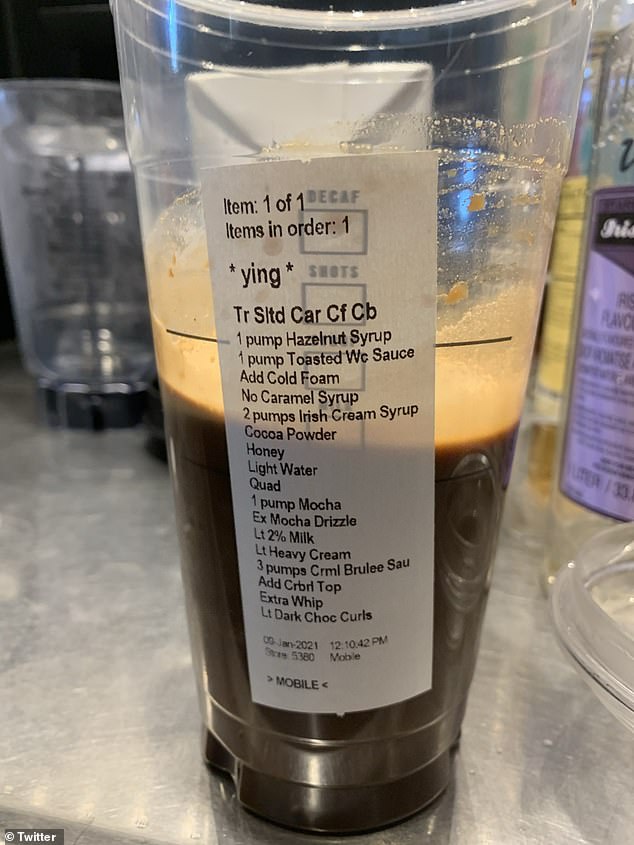 Another shared an image of a Caffè Misto, which had 30 extra demands – including 24 pumps of syrup – and commented: ‘I raise you this.’

A third wrote: ‘I was behind a woman who had an order that ridiculous and insisted it be heated to 37 degrees celsius… ‘not 36, not 38–I will KNOW the difference.’

Yet another showed off an order for a Cherry Mocha Frappucino in San Diego, California that was so long it required two stickers to fit all the customizations.

One more showed an order for a Mango Dragonfruit lemonade woth so many customizations that the sticker was longer than the Venti cup.

But while making a few modifications or specifications is not unusual – people might choose a different type of milk or extra pump of syrup – such a long list of changes means that drinks take much longer to make than usual, which baristas say can lengthen lines and wait times.

Many are blaming this on trendy ‘TikTok drinks,’ pointing to videos of content creators ordering extremely complicated drinks and sharing the recipes with followers.

‘I’m going to get yelled at for this by some but I just think it’s so selfish to order insane drinks like this at a Starbucks and it’s become so prevalent especially due to TikTok,’ tweeted journalist Yashar Ali. ‘I don’t care if you’re paying for it, it’s still selfish.’

‘The line at my local SB is ridiculously long, more then usual. I asked the barista what’s been going on. He said alot of people are ordering the tiktok drinks,’ said another commenter.

‘Starbucks should hire 1 extra employee who ONLY does tik tok drinks. You have to come in store to order it, watch the person make it for you so you can appreciate the work that goes into it, and a $5 tip is mandatory,’ yet another suggested.

One TikToker name Anna, who goes by @annaxsitar, shares popular videos of herself ordering customized drinks.

In one with 6.1 million likes, she asks a Starbucks drive-thru employee to make her a drink that’s a combination of his two favorite drinks – whatever they are, regardless if he thinks they will mix well together.

Meanwhile, some of the customized drink videos are actually made by Starbucks baristas themselves.

Maya, who goes by @starbucksrecipeswithm on TikTok, has shared several viral videos with various drink recipes, including one for a Skittles Frappuccino that has been liked 5.9 million times. 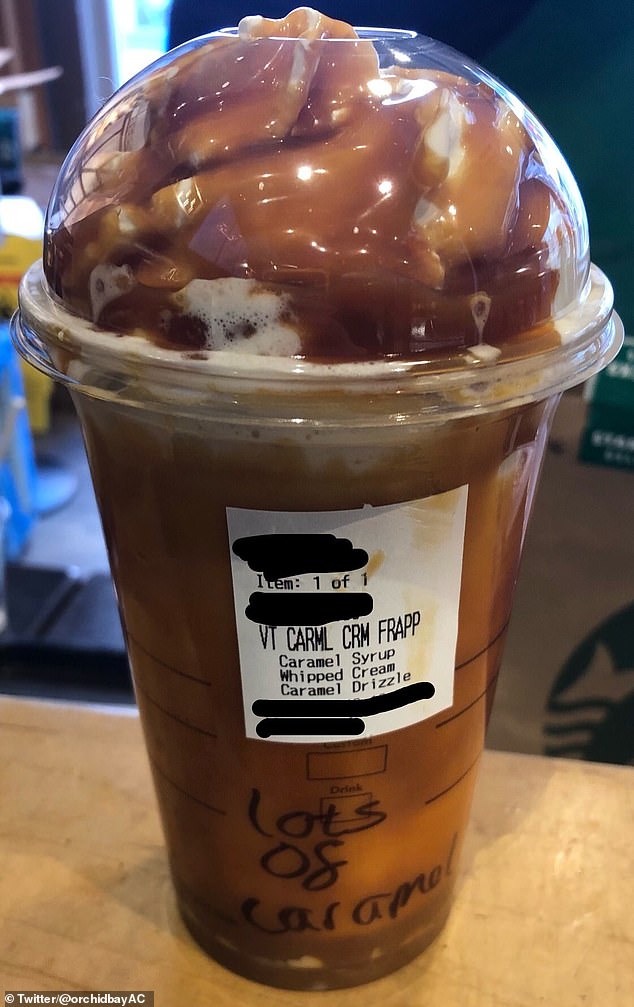 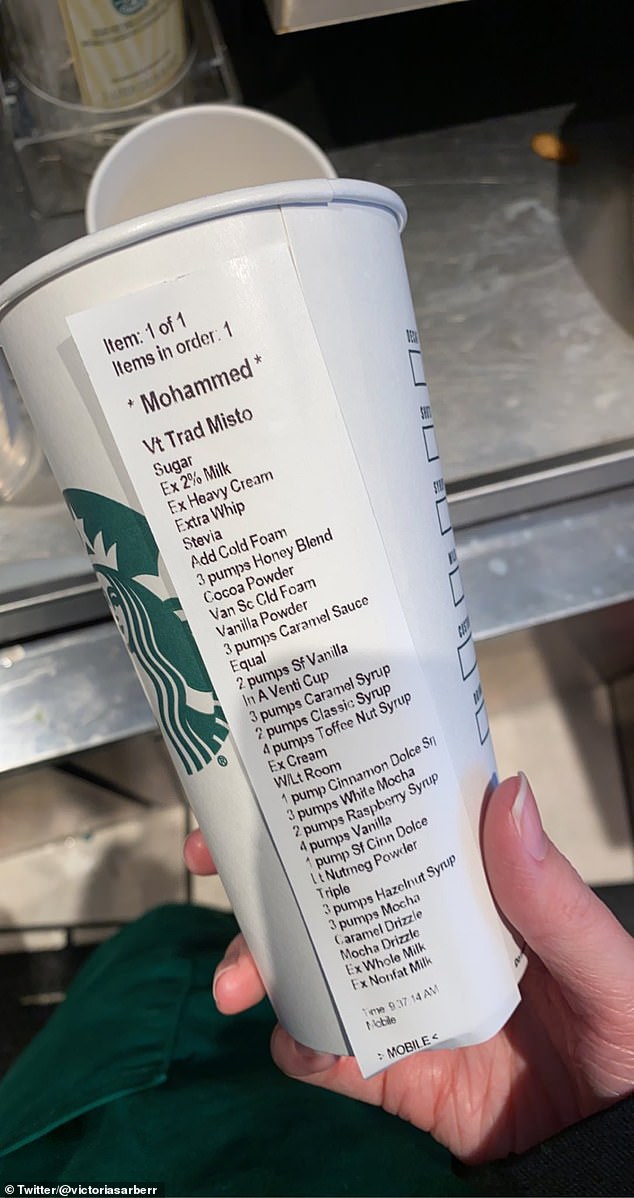 One more barista, believed to be from New York, posted a snap of an order from a fussy customer who wanted, among other things, 34 pumps of syrup 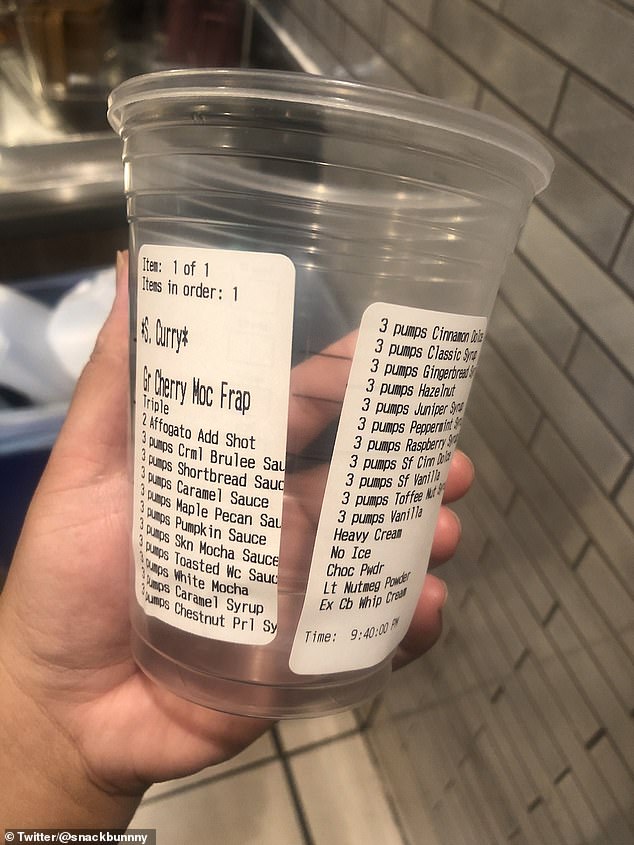 This order for a Cherry Mocha Frappucino in San Diego, California was so long it required two stickers 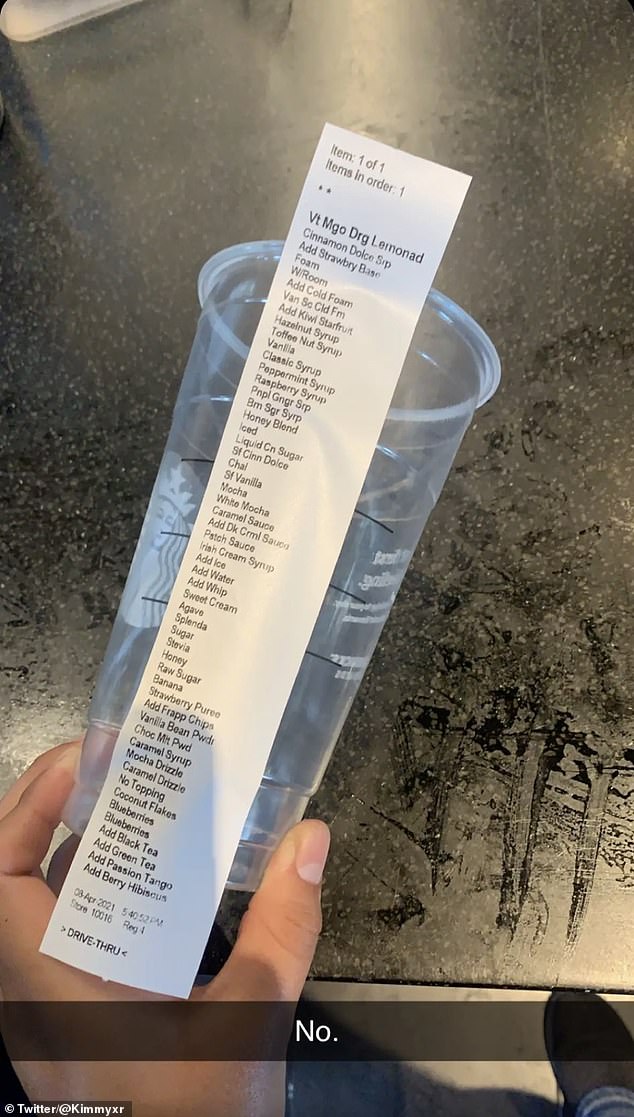 She’s also shared recipes for a Cotton Candy Frappuccino, a Sunrise Frappuccino, and more, all of which require customers to make numerous complicated customizations to their drinks.

Another barista, Kali Perry, who goes by @kalip3rry, has also shared videos with instructions for customized orders

Meanwhile, social media users were shocked to hear how demanding some customers could be with their orders.

‘The rare times I have gone to Starbucks I panicked and ALWAYS get a caramel frap even though I’d like to try something new. I’ve done this for years, I still haven’t even memorized wtf size is a venti and you’re telling me ppl get this like this!? Disgusting,’ wrote one.

A second commented: ‘I don’t even know what half of that stuff is, I worked there like 10 years ago when there wasn’t as many options lol.’

‘Starbucks should have 2 lines: one for people who want actual coffee, and one for whatever narcissistic b******t this is,’ said one more.

Another wrote: ‘How df do people come up with these orders? How would they even know if you missed a ‘pump’ of whatever syrup want? And how would something like this even taste? at this point, is this even coffee anymore? it blows my mind that people make orders like this.’

One person wrote: ‘I don’t even know what half of that stuff is, I worked there like 10 years ago when there wasn’t as many options lol’ (pictured)