Bond actress Naomie Harris displayed the company’s new crop of top-secret cars and supercars from the latest 007 outing, Spectre. Miss Harris reprises the role of Eve Moneypenny, which she first played in the previous 007 film, Skyfall, where she did some of her own stunt driving.

She said: ‘I made my Bond debut in the [Land Rover] Defender, and I have so many fond memories shooting that sequence in cars including the Jaguar C-X75 supercar driven by Bond villain Mr Hinx.’ A Range Rover Sport SVR and the iconic Defender stole the show when they were unveiled for the first time at the palatial Thurn und Taxis venue in Frankfurt.

I also got up close and personal with actor, professional wrestler and mixed martial arts expert David Bautista (far right), who plays baddie Hinx. He drives the Jaguar supercar against 007 Daniel Craig in an Aston Martin DB10 specially created for the film.

The premiere of Spectre is set for Monday, October 26, at The Royal Albert Hall, London, in the presence of the Duke and Duchess of Cambridge and Prince Harry. Bautista’s role as a Spectre villain is in tune with Jaguar’s ‘good to be bad’ image.

‘He’s real bad-ass. But he’s also intelligent. You don’t want to mess with him,’ Bautista told me as he performed a mock headlock on me. 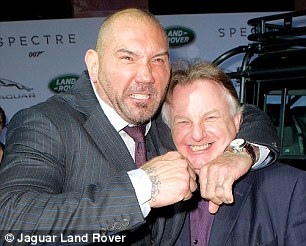 And he added: ‘I think every young boy who grew up watching the Bond movies dreams of being a Bond villain. To have the opportunity to be part of an iconic chase scene in a Bond movie and to drive the C-X75 supercar was a dream come true. It is a beautiful beast of a car. Driving one of the fastest vehicles in the world through Rome’s streets in the dead of night was a very special experience.’

The C-X75 was provided by Jaguar’s special vehicle operations arm (SVO) – its own ‘QBranch’ – in collaboration with development partner Williams Advanced Engineering headquarters in Oxfordshire. Production was canned in the wake of the recession, but resurrected for the movie.

Officially, Jaguar says it will never be built for sale. But if I were making a small wager at Casino Royale, I would not be surprised if it did hit the road in the future.

Aston Martin chiefs held their own party to celebrate the company’s latest Bond car – the DB10 – appearing on the big screen. They also used the moment to announce that their next supercar will be called – predictably perhaps – the DB11.

Chief executive Dr Andy Palmer said the one-off DB10, designed for the film and not for sale, nevertheless gives ‘a glimpse to the future for the next generation of Aston Martins’.

Jaguar’s first ‘family’ sports car roared its way into the record books with the world’s largest loopthe-loop – a real-life version of the classic ‘Hot Wheels’ toy.

Terry Grant performed the gravity defying 360-degree stunt in the new F-Pace sports utility vehicle in Frankfurt on the eve of the show. After a run-up, he hit the 62ft high loop at precisely the required 54 mph. 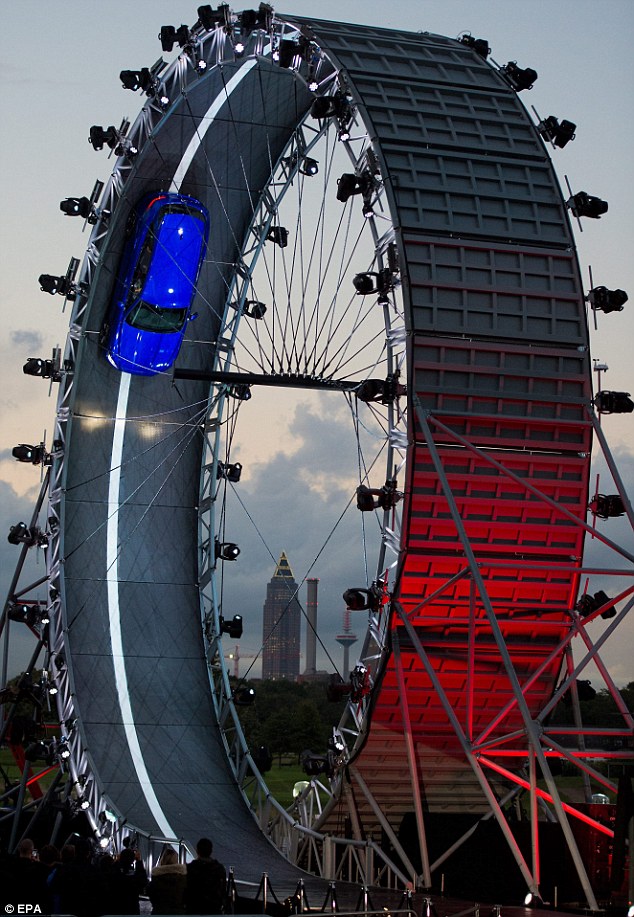 Loopy: A stunt at the Frankfurt show

Spinning upside down, he had to withstand a G-force of 6.5 – that’s six and a half times normal gravity, greater than that experienced by Space Shuttle and fighter pilots – slowing to 15mph at the peak, before accelerating down to exit at 45 mph.

His voice quivering from the adrenaline rush, he said: ‘I don’t normally get nervous, but I was a bit edgy. It was a very proud moment in my career. I am delighted to bring the Guinness World Record back to the UK and help Jaguar run rings around its competitors.’ The extraordinary feat was designed to showcase both the powerful design of the new lightweight F-Pace and its ability to combine agility with sports car speed and performance. Built at the company’s Solihull factory, near Birmingham, order books are now open for the range, which starts from £34,170 with deliveries from next spring.

But to celebrate its launch in the marque’s 80th anniversary year, Jaguar announced a special model called the First Edition, in caesium blue with 22-inch wheels and powered by the 300bhp 3-litre V6 diesel engine, priced £65,275. Just 2,000 will be built.

Other variants in the range are: Prestige, Portfolio, R-Sport, and S.