A new set of stamps is being issued to mark the 75th anniversary of the end of the Second World War.

Eight of the 12 stamps depict scenes of celebration by service personnel and civilians when news of the conflict’s end was announced.

They show how the news was received in areas across Britain, from Devon to London to Liverpool to Glasgow.

There also a reference to the celebrations that were enjoyed by allied prisoners of war in the Far East.

The eight images were originally photographed in black and white, but have been brought to life in colour for the first time by colourist Royston Leonard.

The other stamps show images of personnel returning from overseas, and the return of children evacuated from cities.

Troops parade along London’s Oxford Street, pictured, to mark the end of the war. Just hours before the surrender was confirmed, the Selfridges department store on the street revealed there had been a considerable demand for ‘welcome home’ flags for many weeks 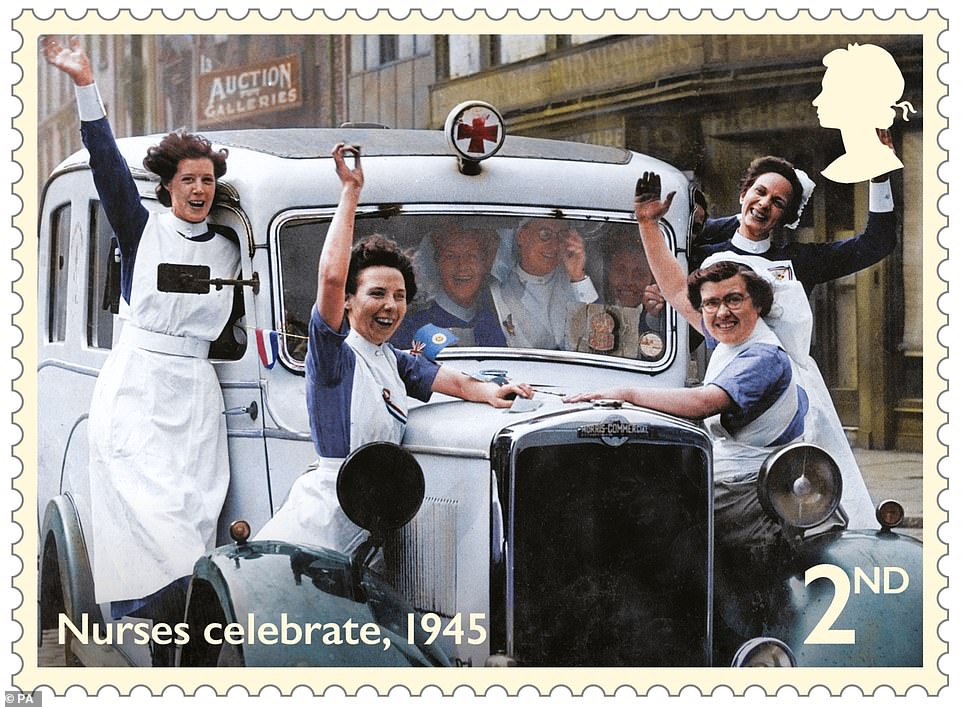 A group of nurses in Liverpool raise their arms in celebration while clinging onto a vehicle, pictured. As many as 67,000 nurses were thought to be needed at the start of the war to care for the expected air-raid casualties – far more than the number of trained nurses in employment 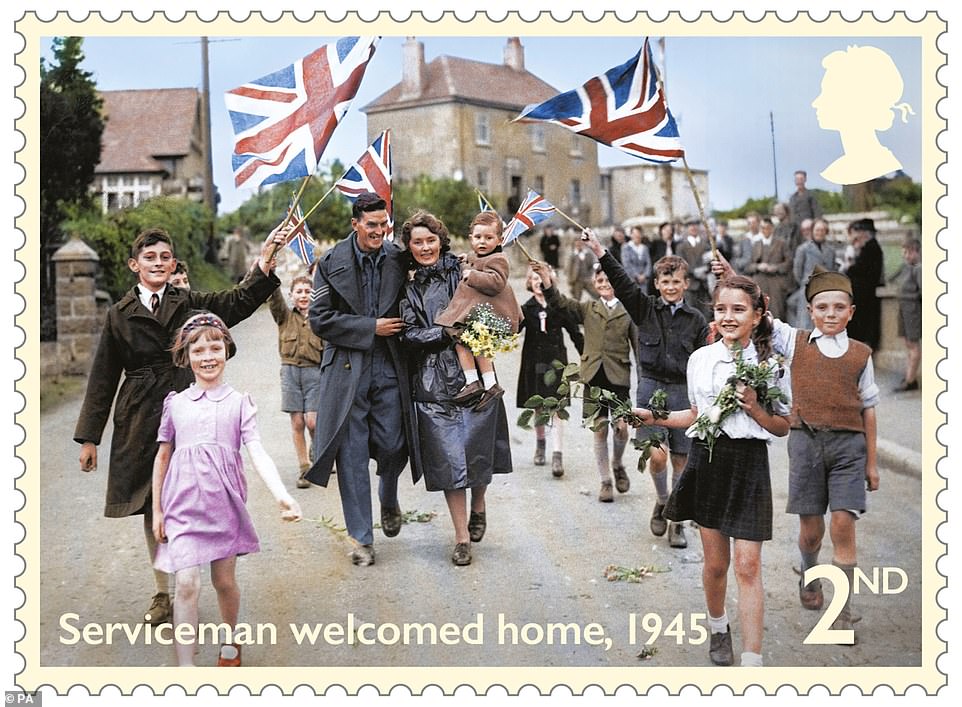 Children wave Union Jack flags and carry flowers, pictured,  as a smiling serviceman returns home to Oreston, South Devon from his airbase in Lincolnshire. Thousands of others received similar heroes’ welcomes as they made their way back to familiar surroundings 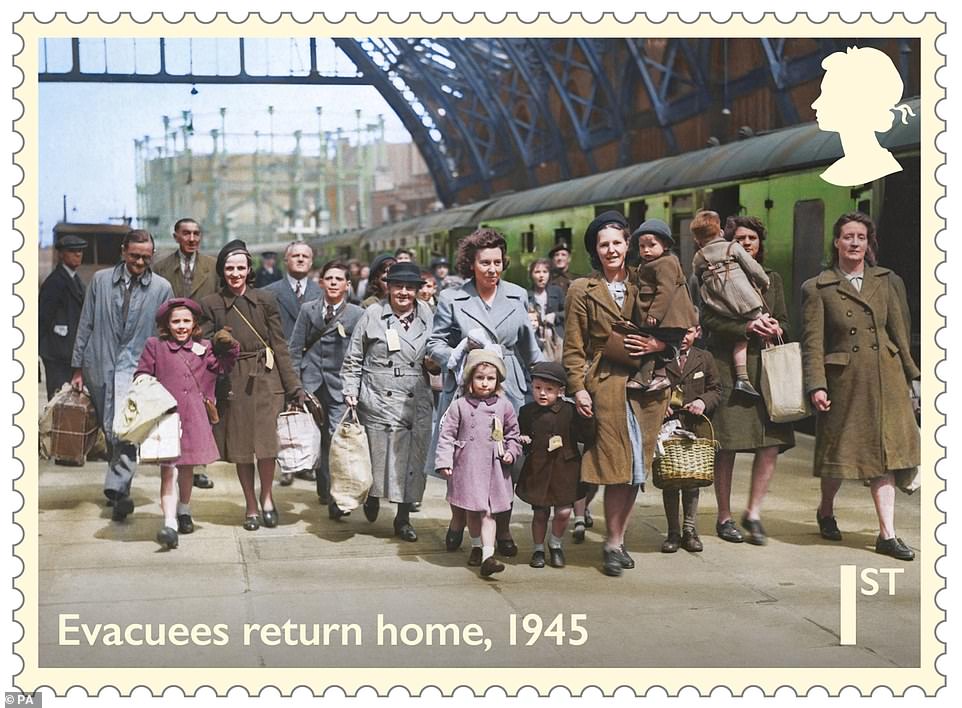 Evacuees return home to London by train, pictured, after a wartime stay in Leicester. The strategy was designed to protect people, especially children, from the risks associated with aerial bombing of cities by moving them to areas thought to be less at risk 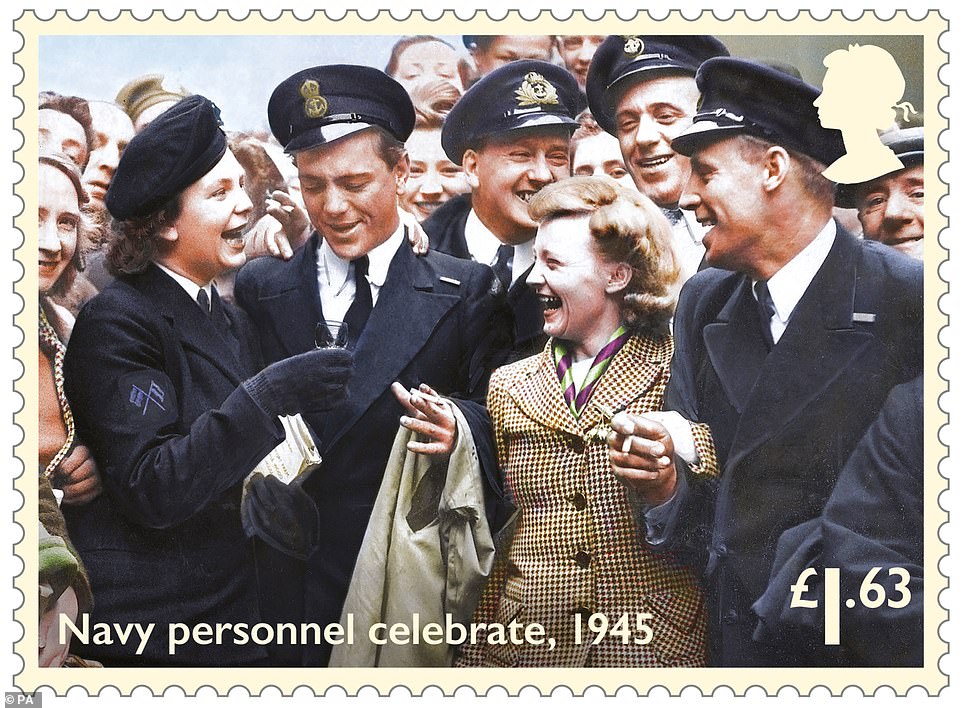 A Wren (member of the Women’s Royal Navy Service) proposes a toast during VE celebrations in Glasgow, pictured. By 1944, some 74,000 women were doing more than 200 different jobs in the WRNS, with 303 tragically killed while serving. After the war the WRNS was made a permanent part of the Royal Navy, but women did not serve in Royal Navy ships until the 1990s 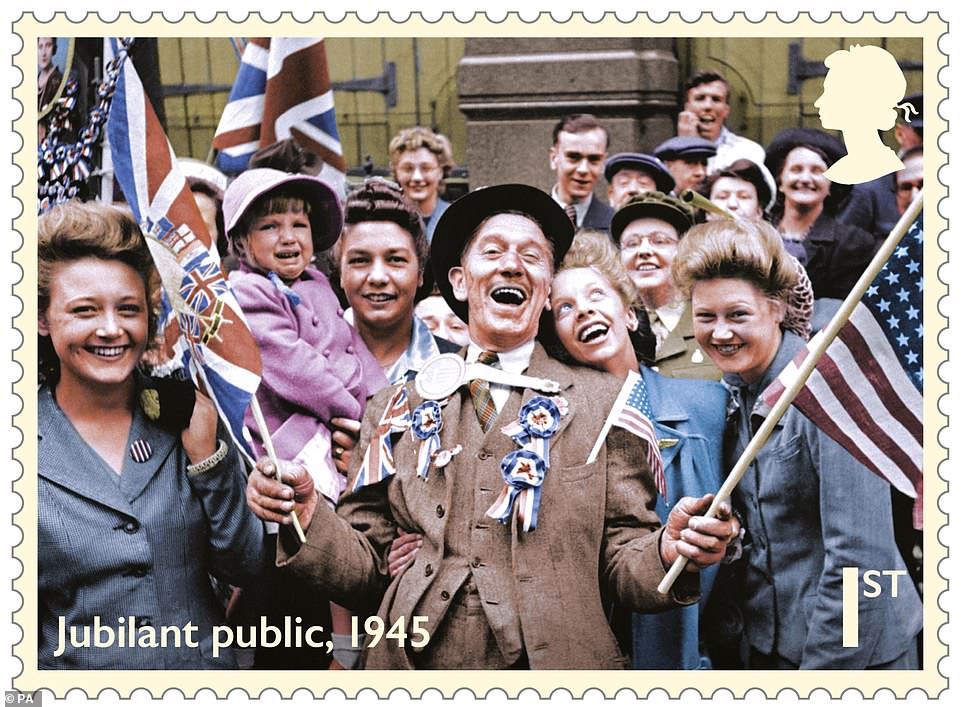 Smiling visitors to London’s Piccadilly wear rosettes and wave flags in celebration as huge crowds descended on the capital. There were scenes of dancing in the streets on VE Day, including a large conga line forming down the middle, while revellers blowing party trumpets 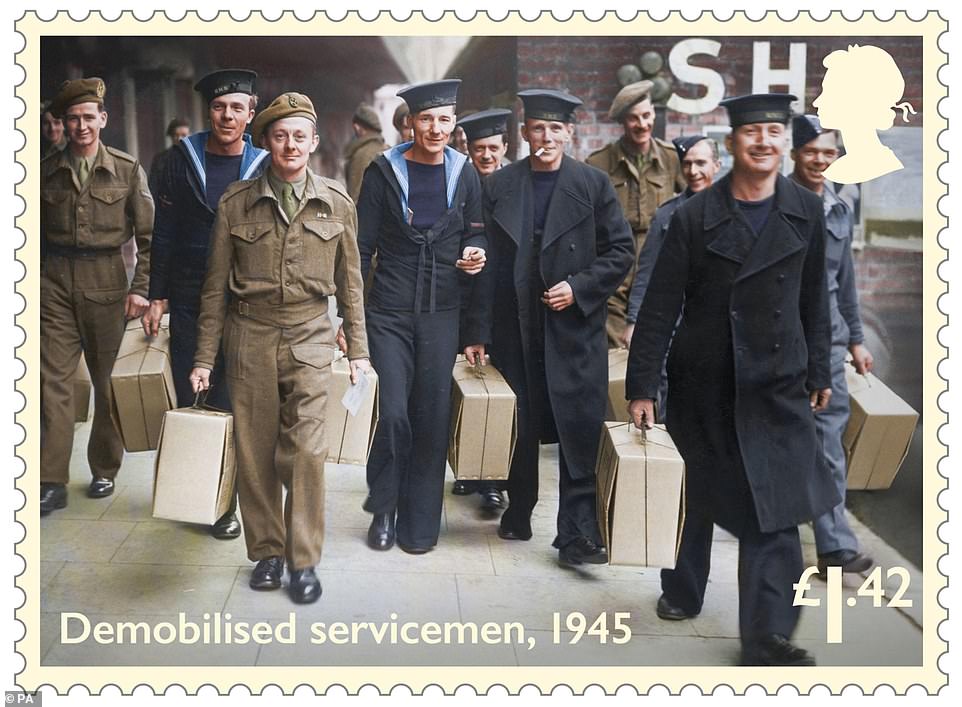 Soldiers and sailors leave a demobilisation centre carrying their civilian clothes in boxes, however. These were where servicemen went before going back to ‘normal life’. However, not everyone was able to make a swift return home – not only due to the impracticality of processing so many men in such a short period of time, but the army also still had commitments it had to fulfill in areas including Germany and northern Russia 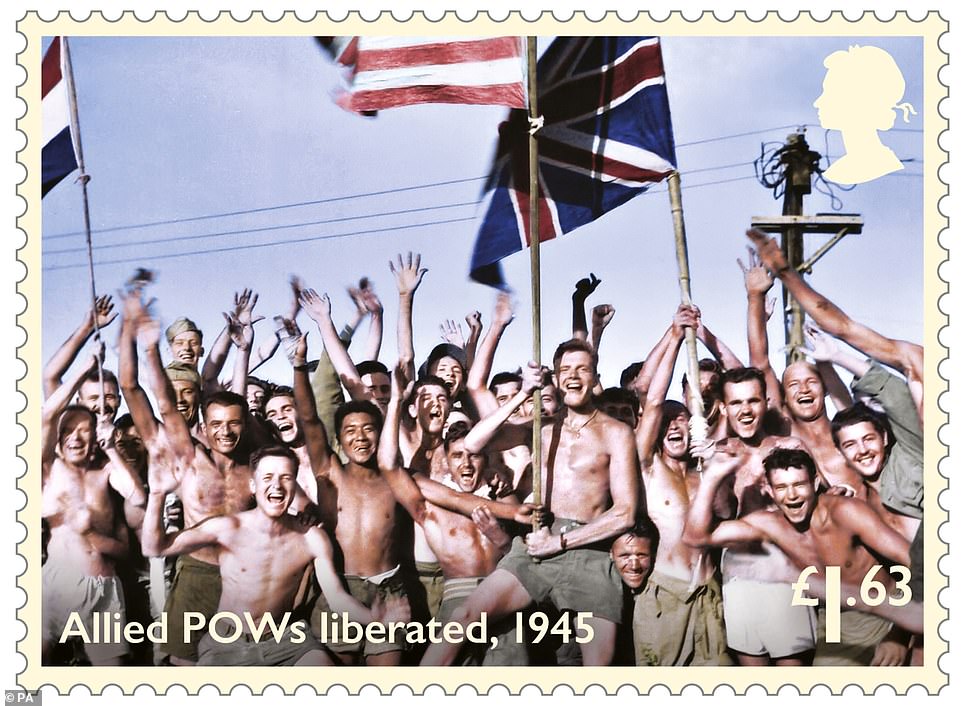 Allied prisoners of war hoist Union Jack, United States and Netherlands flags aloft at Aomori Camp near Yokohama, Japan, pictured, as they celebrate being rescued. Approximately 3,500 prisoners of war died in Japan while they were imprisoned 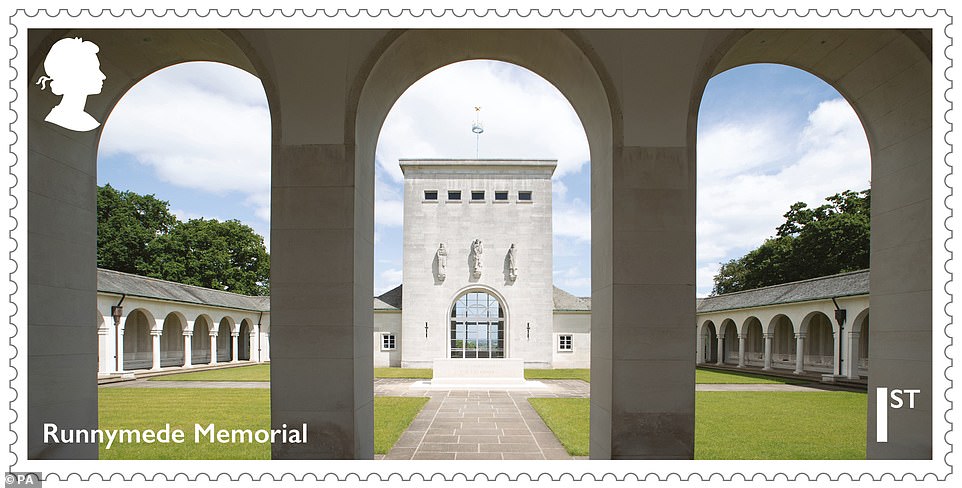 Overlooking the River Thames on Cooper’s Hill in Runnymede, Surrey, is Runnymede Memorial, pictured, sometimes known as the Air Forces Memorial. It commemorates more than 20,000 airmen and women who were lost in the war during operations from bases in the United Kingdom and North and Western Europe who have no known grave 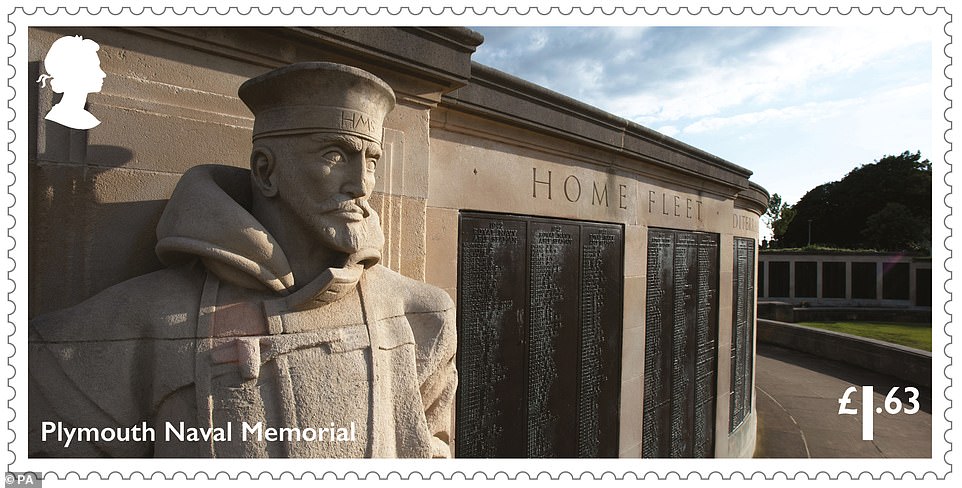 With its central position on the Hoe overlooking Plymouth Sound in Devon, the Plymouth Naval Memorial, pictured, commemorates more than 7,200 naval personnel of World War I and nearly 16,000 of World War II who were lost or buried at sea 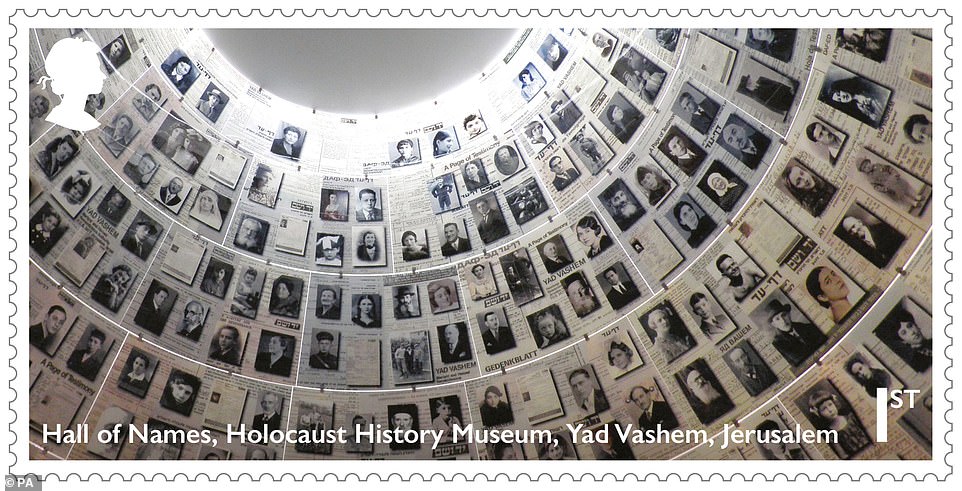 The Hall of Names at Yad Vashem, Jerusalem, pictured, is the Jewish People’s memorial to each and every Jew who perished in the Holocaust. More than two million pages are stored in the circular repository around the outer edge of the hall, with room for six million in all 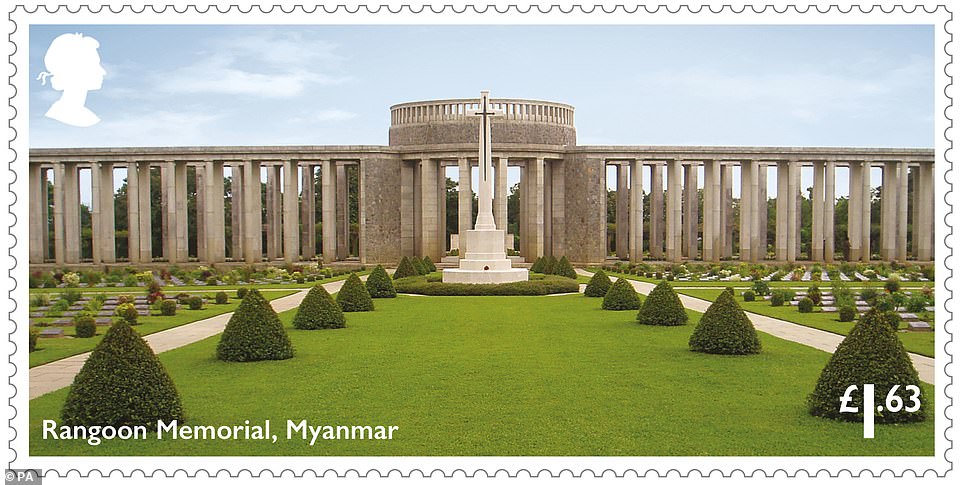 Located in the centre of Taukkyan War Cemetery in Burma is Rangoon Memorial, pictured. It commemorates nearly 27,000 Land Forces of the British Empire who died during the campaigns in Burma and who have no known grave. In December 1941, Japanese forces invaded Burma, catapulting the nation into World War II. By March 1942, the Japanese had captured the capital city of Rangoon and their occupation of the country began

Four additional stamps presented in a miniature sheet show images of official monuments and cemeteries built to remember and honour the fallen as well as a memorial to the victims of the Holocaust.

Philip Parker of Royal Mail said: ‘Our new stamps capture how the end of the war was greeted and the resulting return of service personnel after nearly six long years of conflict. We also pay tribute to those who never returned, and the victims of the Holocaust.’

The stamps will be on sale from May 8.