A stake-wielding burglar was shot dead by US Secret Service agents after breaking into the Peruvian Embassy in Washington DC.

The unnamed assailant was tasered in an attempt to subdue him, then gunned down after he continued to lunge at agents during the brazen Wednesday morning raid. He was declared dead at the scene.

His identity has not been released, but DC Metropolitan Police have said he was aged between 20 and 30.

Cops say the intruder used the metal stake to break in, and have not been able to confirm whether the home invasion was a crime of opportunity, or if the burglar was there to steal a specific item.

The building that he targeted serves as the Peruvian Embassy in the US, and home of Peruvian Ambassador to the US Oswaldo de Rivero and his family.

De Rivero, his family and staff were at home during the 8am attack, but all escaped the incident uninjured.

Several unmarked vehicles were spotted entering and exiting the crime scene Wednesday morning, in the hours after the shootout, which cops say came after a failed burglary 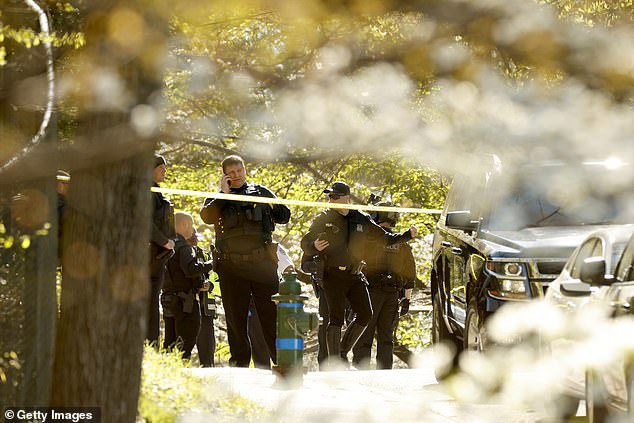 The unnamed male intruder was tasered and shot to death by agents after trying to break-in burglarize the building – which also serves as the private residence of Peru’s US ambassador. The resulting shootout saw two agents injured 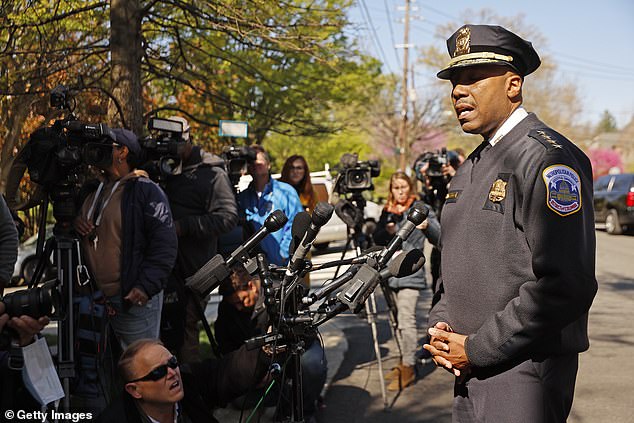 Police revealed details of the break-in during an on-scene media briefing blocks from the embassy, a gated, palatial estate located in the quiet, residential neighborhood of Forest Hills, home to a series of similar opulent mansions 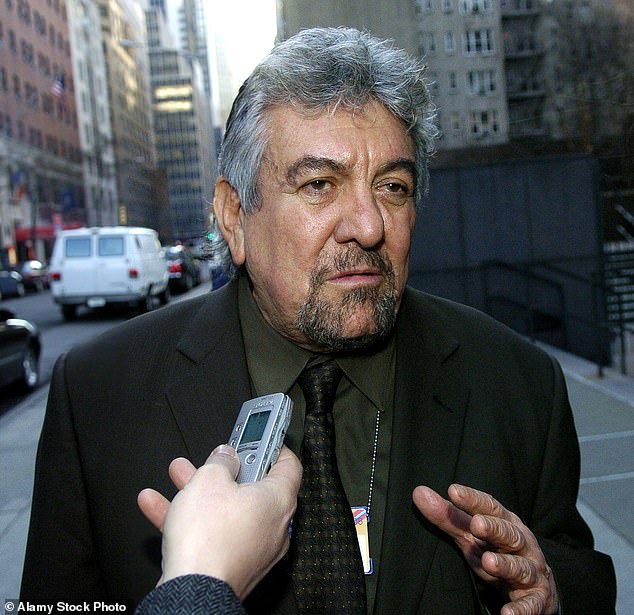 The embassy is home to Peruvian ambassador to the US Oswaldo de Rivero, pictured, and his family, who escaped unscathed

Police revealed details of the break-in during an on-scene media briefing blocks from the embassy, a gated, palatial estate located in the quiet, residential neighborhood of Forest Hills, home to a series of similar opulent mansions.

‘This morning, just before 8 AM, members of the United States Secret Service uniformed division were summoned to the 3000 Block of Garrison Place in response to a call for a burglary in progress,’ DC Police Chief Robert Conte said during the presser.

‘Upon the arrival of the officers on the scene, they located an individual who was in the rear of the ambassador’s residence – The Peruvian Embassy.

‘Once the officers encountered this individual in the back they learned that this individual had smashed out several windows to the backside of this residence,’ Conte said.

The officer revealed that de Rivero, a retired Peruvian diplomat aged 85, was home with his family at the residence when they heard the windows shattered, spurring them to summon the agents.

‘They encountered this person,’ Conte said, referring to the agents, who he said ‘pulled their less-than-lethal service weapons, their Tasers,’ upon coming across the suspect outside the rear of the residence

Conte said the ‘person was holding a metal stake.’ 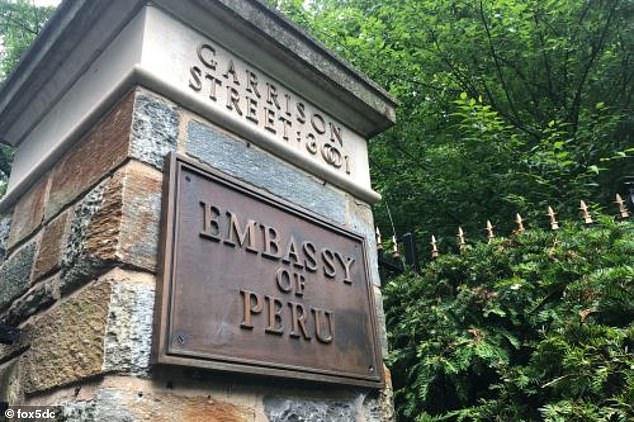 At least one person was shot and two Secret Service personnel are now being ‘evaluated’ following the shootout, which cops said took place around 8 am 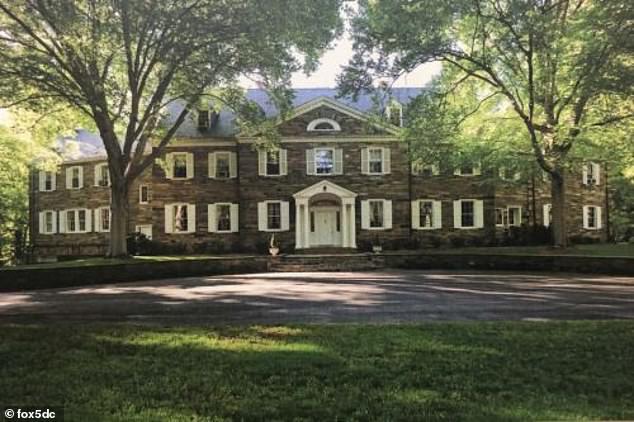 The Secret Service reported its officers shot ‘a reported intruder’ at the embassy (pictured), on the 3000 block of Garrison Street, ‘following a confrontation’ just before 8. The intruder – who smashed several windows at the back of the residence to gain entry – was killed by the agents 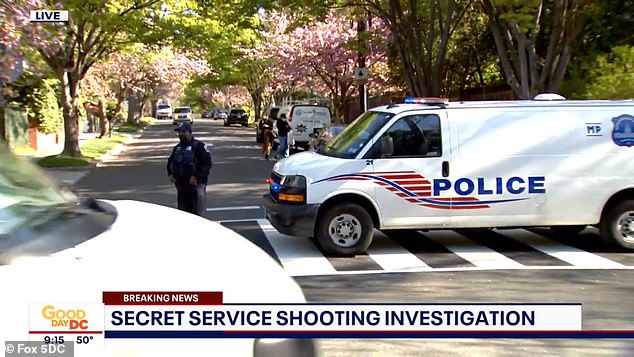 Cops were called to the gated estate soon after, responding to reports that agents shot the ‘reported intruder following a confrontation.’

‘One gunshot victim and two Secret Service Police being evaluated,’ officials responding to the reports could be heard saying over radio chatter Wednesday, at 8:10 am.

The male suspect, who has not been named, was believed to be in his late-20s early 30s. He was declared dead at the scene.

Officials from the service said two agents involved in the shootout sustained injuries. DC Police said their conditions are non-life-threatening.

The Secret Service is currently investigating the incident. Officers are also participating in the investigation.

Police confirmed to DailyMail.com Wednesday that a shooting had taken place at the residence – located on the 3000 block of Garrison Street. 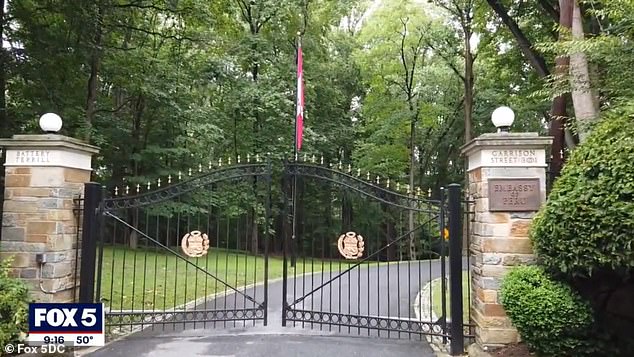 Cops were called to the gated estate early Wednesday, responding to reports that agents shot a ‘reported intruder’

Cops confirmed that one person had been shot and is being attended to by EMS personnel.

It is not yet clear how many shots were fired during the incident. No additional details were provided.

This is a breaking news story; please check back for more updates. 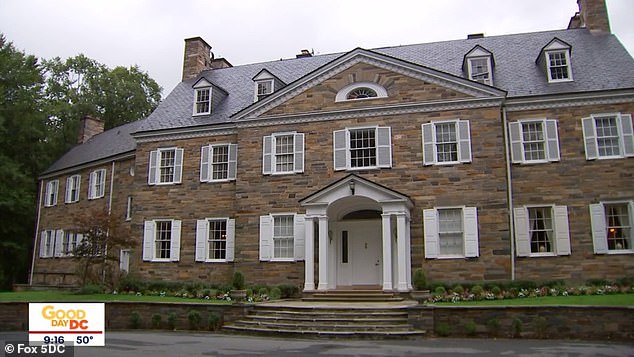 Cops confirmed that one person had been shot and is being attended to by EMS personnel. The two Secret Service agents are currently being treated for 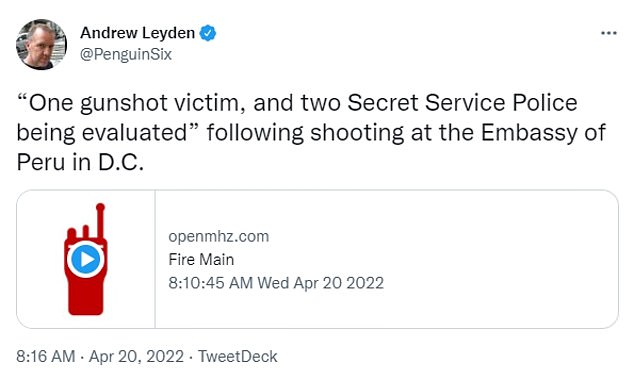 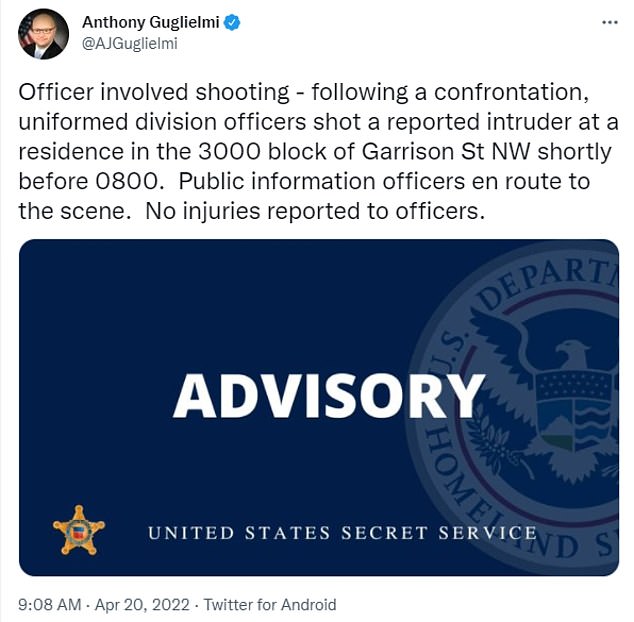