Staff working from home do nearly an extra hour a day, sending more emails and attending more meetings than when they are in the office, research shows.

Despite the Government’s desire for Britons to go back to work, people are spending 49 minutes longer at their desks each day – an extra four hours per week – according to a report by the National Bureau of Economic Research.

Before coronavirus started only 6 percent of us worked from home, compared to 43 percent of the population at the height of the outbreak in April, The Times reported.

Ninety percent of staff say they would like to continue working from home in some form or another, even if that means they have to work longer hours, while 70 percent claim that they’re more productive than they are in the office.

But despite claims that workers are kicking back in front of the telly with their laptops, researchers at Harvard and New York University found that staff are attending more meetings and sending more emails.

They analysed data from 21,000 companies in 16 cities in the US, Europe and the Middle East which showed the time between the first and last email sent by an employee in a day had increased by 48.5 minutes.

In addition, the number of meetings was up by more than 10 percent.

However, the academics noted that these meetings tended to be shorter and that because employees could not communicate face-to-face as readily, more emails were a natural by-product of working from home.

The report, obtained by The Times, said: ‘Though speculative, it is possible that employees also find it harder to stay engaged in long virtual meetings compared to in-person meetings. 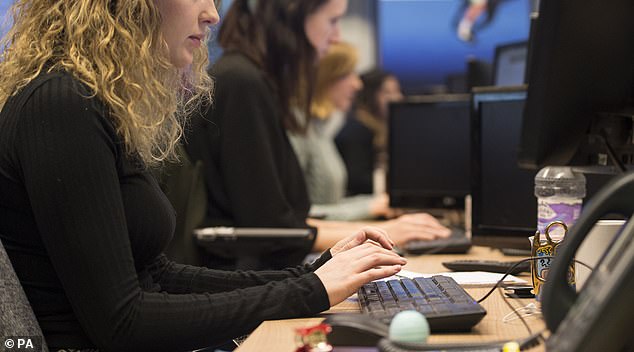 People working in an office

‘An employee’s attention span may be additionally strained by challenges specific to the Covid-19 pandemic, such as taking care of children who are not in school.’

The report noted that the findings could point to a more flexible working arrangement where staff were balancing their emails and meetings with looking after their children during the day.

The researchers said it was too early to conclude whether working from home was a better alternative to the norm.