St Paul’s Cathedral was evacuated this afternoon following a gas leak with 50 people told to leave and another 200 ordered out of surrounding buildings.

London Fire Brigade crews were called to reports of a gas main leaking into a basement at a restaurant and office block on St Paul’s Churchyard.

Two fire engines, two fire rescue units and support vehicles were sent to the scene after the brigade was called at 1.20pm, and an 80ft (25m) cordon was set up.

The leak meant Thameslink trains were not stopping at City Thameslink station, while Underground trains were going straight through St Paul’s station this afternoon.

Keir Baker, who works for law firm Morgan Lewis, said: ‘We’ve had to evacuate our offices. The entirety of the square around the cathedral is cordoned off by police.

‘I’ve had to leave my laptop behind. I think it’s 50/50 on whether this’ll be seen as a good excuse for missing today’s deadlines.’

City of London Police initially said St Paul’s Churchyard and Creed Lane were closed in both directions, before a further series of wider closures was put in place. 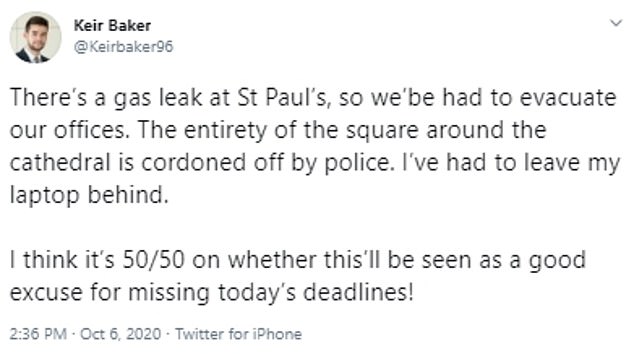 Separately today, London Fire Brigade crews were also called to a gas leak two miles away at shops on Regent Street after a gas main ruptured below ground level.

In that incident at 1.50pm, gas leaked into the basement of an adjacent premises, with the Metropolitan Police evacuating about 150 people from buildings in the area.

A 160ft (50m) cordon was put in place as a precaution, with two fire engines and two fire rescue units are on scene along with additional support vehicles.

A police spokesman said: ‘These closures will be in place for some time. Please find alternative routes where possible.’

PC Harry Rance tweeted a picture of a cordoned-off Ludgate Hill, saying: ‘Many roads around St Paul’s are closed due to a gas leak. Please avoid the area.’

The LFB said: ‘Firefighters have been called to reports of a gas leak at a restaurant and office block on St Paul’s Churchyard. A gas main is leaking into a basement.

‘A 25-metre cordon is in place as a precaution. The Brigade was called at 1.20pm. Two fire engines, two fire rescue units and support vehicles are at the scene.

The Cathedral is closed for sightseeing and services for the remainder of today, October 6. City of London Police and the London Fire Brigade are at the scene.

‘Ticket holders for October 6 can use their ticket any day this week until October 10 or reschedule their ticket for a later date.’