A sewage leak which campaigners say transformed a Cornish beach into a public health hazard on Sunday is the 10th time in three months the beauty spot has been polluted by effluent – and the 12th environmental alert it has faced this year, it was claimed tonight.

In a shocking video that has since gone viral. a huge swathe of water can be seen sweeping out across the picturesque cove, transforming its usually turquoise sea a murky brown.

The slick of stinking water was caused by storm overflow that was ‘triggered briefly’, according to South West Water. It prompted the closure of the beach and a sewage pollution alert.

Now it can be revealed that weekend’s leak was the 10th time the beach has faced a sewage or pollution alert in just three months – and its 12th alert so far this year. 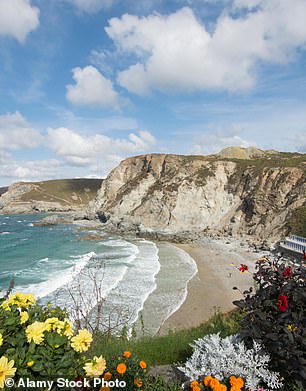 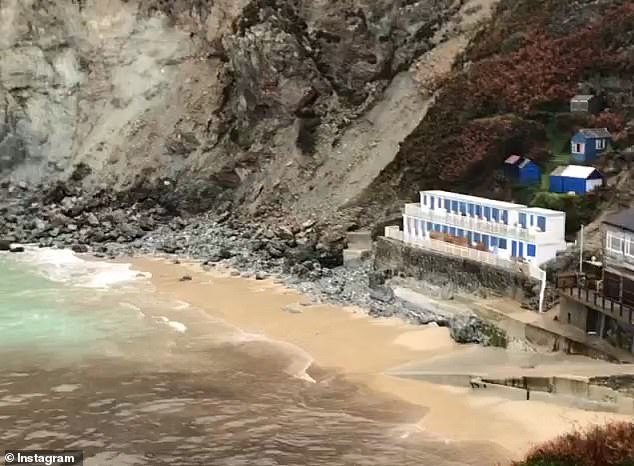 South West insisted much of the water was run-off from fields, with Cherilyn Mackrory, Tory MP for Truro and Falmouth, adding that brown water was ‘not from sewage’.

But the claims have done little to quell calls from campaigners who are urging tougher action from minister to punish ‘profiteering water companies’ polluting Britain’s.

The plea was issued by environmental group, Surfers Against Sewage – which is based at St Agnes.

Amy Slack, head of campaigns and policy with the organisation, told MailOnline: ‘The pollution spill that spewed into the water in St Agnes is a sickening illustration of how our water industry has been permitted to profit at the expense of people and planet for decades.

‘This is far from an isolated incident, in fact it was the 12th alert at this popular surfing and swimming beach this year and is a result of chronic underinvestment in our sewerage system, all while shareholders and directors rake in the cash.

‘Despite huge public demand for an end to sewage pollution, the government’s recent sewage action plan is wholly inadequate, and will continue to permit sewage pollution into our waterways for decades to come.

‘We demand the government urgently reviews its sewage action plan, properly funds the industry regulator, to truly hold water companies to account, and finally makes a genuine effort to put an end to sewage pollution for good.

‘Otherwise, the scenes that we saw yesterday will continue to be a regular sight around the precious coastline of the UK.’

According to the monitoring app Safer Seas and Rivers, Trevaunance Cove, has faced a total of 10 sewage alerts, one maintenance alert and one pollution risk warning since January.

Seven of Cornwall’s beaches still have sewage warnings on them, according to the digital tracking app.

South West Water admitted they had allowed sewage to be pumped into the sea as part of a ‘controlled release’ but they denied the brown colour was entirely due to effluent, claiming that ‘other factors contributed’ to the colour, such as ‘mud in the water dislodged by the heavy rain flowing into the area from a nearby stream and runoff from agricultural land’.

A spokesperson from the company added: ‘While the storm overflow at St Agnes triggered briefly on Sunday (30 October) following heavy rain, this was a short duration spill and is unlikely to have caused the level of discolouration shown in the video.

‘On this occasion, we believe there were other factors which contributed to the discolouration, such as mud in the water dislodged by the heavy rain flowing into the area from a nearby stream and runoff from agricultural land. 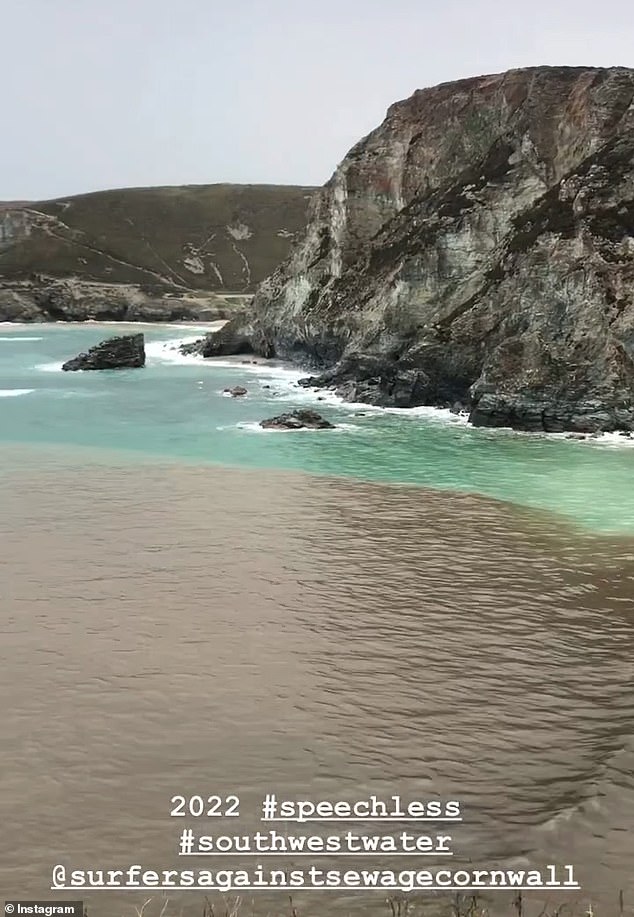 Footage of the sewage was shared by Surfers Against Sewage, a campaign group fighting against allowing sewage to be released into UK waters 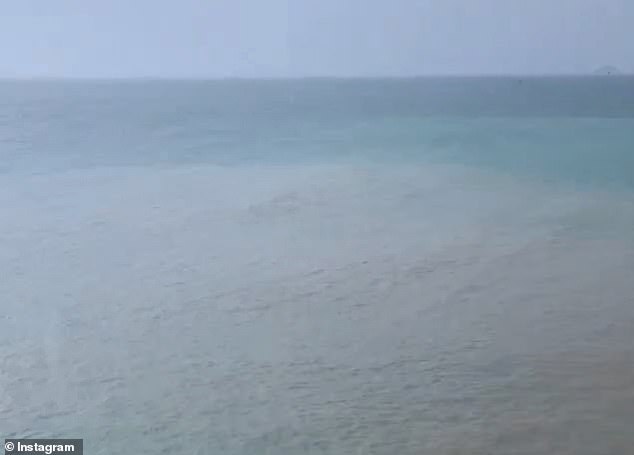 The murky brown water could be seen far out into the ocean, making the beach unusable for swimmers and surfers

‘We continue to increase investment in the region’s infrastructure as part of our ongoing commitment to protecting and enhancing the natural environment.”

‘As well as prolonged periods of extremely hot weather, we have seen heavy localised rainfall which hasn’t been able to permeate into the dry ground, meaning significant volumes run into our network, which can cause our storm overflows to trigger.’

In a tweet, MP Ms Mackrory, added: ‘Rigorous testing this morning has confirmed that the brown colouring of the water yesterday at #StAgnes was NOT from #sewage. Testing has been verified by the @EnvAgency. It was runoff from the fields on top of the cliffs following heavy rain. All spills are unacceptable.’

The latest leak at St Agnes left locals in the quiet Cornish resort horrified, with one lifeguard at the beach describing the stench as ‘unbearable’.

Joel Henthorn, is the chairman of the St Agnes Surf and Lifesaving Club, said there were toilet roll remains flowing on to the beach after the pollution began, at about 9.30am.

‘The water was grey and frothing and smelled of sewage,’ he told the BBC. ‘It was horrible, the smell was unbearable.

‘The beach was in a really bad state so we red-flagged it for people’s safety.’

Children and families enjoying their half-term break were forced to leave the sea amid the concern for public safety.

‘It’s such a sad situation, especially in a place like this which was thought of as a safe place to swim,’ Mr Henton added.

In recent weeks, the number of alerts issued for the beach has surged, with four recorded in both September and October.

One business owner in St Agnes, who asked not to be named, described the situation as ‘horrific’ and feared the impact the leak could have on tourism in the picturesque coastal beauty spot.

‘It was absolutely horrendous,’ the businessowner told MailOnline. ‘The village’s antiquated sewerage system just can’t cope with the number of villagers here. It’s just horrific at the moment.

‘I was on Twitter last night and I saw hundreds of people saying they wouldn’t go to St Agnes anymore – I don’t for a second think that’s true, but it’s still not very heart-warming to see.’

Water companies in the UK have come under fire this year as millions of gallons of untreated sewage have been allowed to contaminate the country’s seas.

Although it is illegal to dump sewage in many scenarios, if water overflows get too full then water firms have little choice but to allow sewage to enter the sea to free up space.

Regular sewage dumping harms the ocean’s wildlife and creatures, but also poses a risk to humans due to the harmful bacteria it can carry.

The latest incident sparked a furious backlash on social media, with some users saying they were left ‘speechless’ by the release in Cornwall.

There was a widespread backlash online over the images of pollution.

Some described the it as ‘unbelievable’ and ‘truly awful’.

Speaking on Sunday, a South West Water spokesman said the region had seen ‘dramatic changes in weather patterns presented by climate change’, with the are having been in a state of drought in August.

‘Through these changes we are now experiencing more extreme weather patterns than ever before and this year the South West saw one of the driest and hottest years on record,’ the South West Water official added.

‘As well as prolonged periods of extremely hot weather, we have seen heavy localised rainfall which hasn’t been able to permeate into the dry ground, meaning significant volumes run into our network, which can cause our storm overflows to trigger.’

The company pointed towards this as being the factor behind Sunday’s release at St Agnes, adding that it would ‘continue to increase investment’ in the area’s infrastructure to protect the environment from future spills.

In August it was revealed that water companies had spent more than nine million hours pumping raw sewage into Britain’s seas and rivers since 2016.

At the time of the release, Labour warned the actual number of hours was likely to be far more.

It also showed there has been a 2,553 per cent increase in the number of monitored discharge hours between 2016 and 2021.

In 2016, the Environment Agency recorded sewage being discharged for just 100,533 hours.