Police are looking for 140 people believed to have links with ISIS, which has claimed responsibility for the Easter Sunday suicide bombings of churches and hotels in Sri Lanka, President Maithripala Sirisena said said Friday as shooting erupted in the east during a raid.

Muslims in Sri Lanka were urged to pray at home on Friday and not attend mosques or churches after the State Intelligence Services warned of possible car bomb attacks, amid fears of retaliatory violence for the bombings that killed 253 people.

Shooting between security forces and a group of men in the town of Ampara Sainthamaruthu near Batticaloa occurred during a search and cordon-off operation related to the attacks, a military spokesperson said.

The spokesperson said there was an explosion in the area and when soldiers went to investigate, they were fired upon. No details of casualties were immediately available.

The Archbishop of Colombo announced there will be no Sunday masses until further notice in the wake of the bombings, while the U.S. Embassy in Sri Lanka urged citizens to avoid places of worship over the coming weekend after authorities reported there could be more attacks targeting religious centres.

Sri Lanka remains on edge after the suicide bombing attacks on three churches and four hotels that also wounded about 500 people. The death toll from the attack, which had risen to 350, was lowered Thursday, with officials citing the challenge of properly identifying people killed in the blasts. 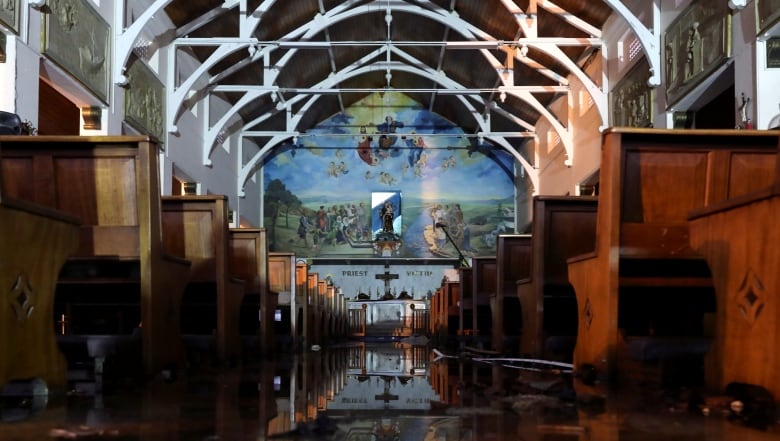 The interior of St. Anthony’s Shrine in Colombo days after the attacks in Sri Lanka. On Friday, Cardinal Malcolm Ranjith said there would be no Sunday masses in the country until further notice. (Athit Perawongmetha/Reuters)

Nearly 10,000 soldiers were deployed across the Indian Ocean island state to carry out searches and provide security for religious centres, the military said on Friday.

The All Ceylon Jamiyathul Ullama, Sri Lanka’s main Islamic religious body, urged Muslims to conduct prayers at home on Friday in case “there is a need to protect family and properties.”

Police have detained at least 76 people, including foreigners from Syria and Egypt, in their investigations so far.

The Islamic State in Iraq and Syria provided no evidence to back its claim that it was behind the attacks. If true, it would be one of the worst attacks carried out by the group outside Iraq and Syria.

The extremist group released a video on Tuesday showing eight men, all but one with their faces covered, standing under a black ISIS flag and declaring their loyalty to its leader, Abu Bakr Al-Baghdadi.

The Sri Lankan government said nine homegrown, well-educated suicide bombers carried out the attacks, eight of whom had been identified. One was a woman.

Sirisena told reporters on Friday some Sri Lankan youths had been involved with ISIS since 2013. He said information uncovered so far suggested there were 140 people in Sri Lanka involved in ISIS activities.

“Police are looking to arrest them,” Sirisena said.

Authorities have so far focused their investigations on international links to two domestic Islamist groups — National Thawheed Jama’ut and Jammiyathul Millathu Ibrahim — they believe carried out the attacks.

Government officials have acknowledged a major lapse in not widely sharing an intelligence warning from India before the attacks.

Sirisena said top defence and police chiefs had not shared information with him about the impending attacks. Defence Secretary Hemasiri Fernando resigned over the failure to prevent the attacks.

“The police chief said he will resign now,” Sirisena said.

He blamed Prime Minister Ranil Wickremesinghe’s government for weakening the intelligence system by focusing on the prosecution of military officers over alleged war crimes during a decade-long civil war with Tamil separatists.Sirisena fired Wickremesinghe in October over political differences, only to reinstate him weeks later under pressure from the Supreme Court. 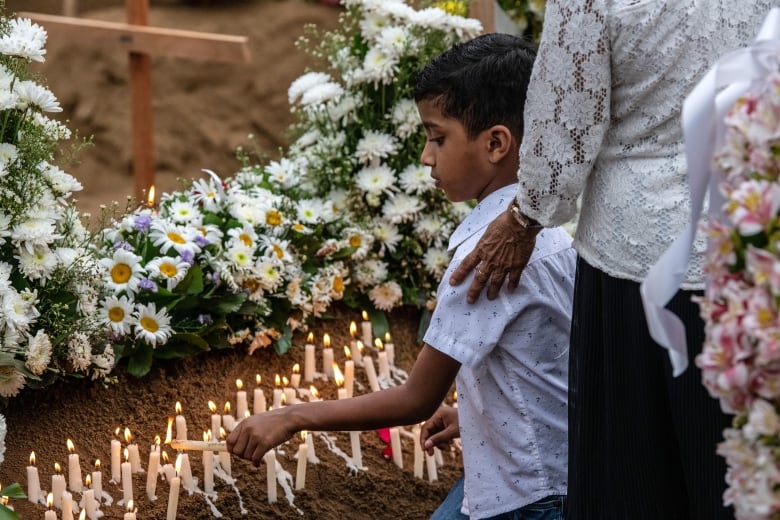 A young boy lights a candle at a grave on Friday after a funeral for one of the people killed in the Easter Sunday attack on St Sebastian’s Church. (Carl Court/Getty Images)

Opposing factions aligned to Wickremesinghe and Sirisena have often refused to communicate with each other and blame any setbacks on their opponents, government sources say.

The Easter Sunday bombings shattered the relative calm that had existed in Buddhist-majority Sri Lanka since a civil war against mostly Hindu ethnic Tamil separatists ended 10 years ago.

Sri Lanka’s 22 million people include minority Christians, Muslims and Hindus. Until now, Christians had largely managed to avoid the worst of the island’s conflict and communal tensions.