EXPRESS INFORMER > Travel > Sri Lanka is back in business, with plenty of deals – and you’ll practically have it to yourself

The ancient city of Polonnaruwa in central Sri Lanka is a shining place of palaces and shrines. I particularly admire the superb inscription left by one haughty ruler, informing an envious rival that he is like a jackal wanting to be a lion, a worm, a cobra, a sheep, a horse, a firefly, the sun. That’s one heck of a putdown.

These royal ruins — a UNESCO World Heritage Site dating back to the tenth century — are sprawling, staggering and world-class. Yet they are almost deserted.

It’s the same story all over the country. Gleaming hotels, empty. Glittering beaches, abandoned. Gripping museums, echoing with the absence of visitors.

Why? Because on April 21, Islamist suicide bombers with links to ISIS walked into three hotels and three Catholic churches and detonated devices, killing 259 people and injuring another 500.

Sri Lanka’s visitor numbers plummeted, and the tenth of the population that relies on tourism has suffered its worst year in memory.

I speak to Wasantha, 42, a soft-voiced souvenir vendor at Polonnaruwa who, from boyhood, has sold his cobra flutes and palm-leaf hats to visitors. Recently he took out a loan to buy a small guesthouse, but since April he has had to default on repayments. His message to foreigners is simple: ‘Our country needs you.’

The sad-eyed owner of an excellent nearby restaurant, Lasantha, 48, has pawned his wife’s jewellery to pay his staff to wait on empty tables.

It’s not surprising the bombings have affected tourism. But we’re now seven months on and the Foreign & Commonwealth Office has lifted its ban on casual visits. So where is everybody?

They’ll be back. But for the time being, you can enjoy everything this wonderful island in the Indian Ocean has to offer — and you can have most of it to yourself.

When I go snorkelling on the coral reefs off Trincomalee in the east, I’m the only client in the 20-seat motorboat.

‘There are many sharks here,’ says the boatman, Kaleel, as I wrestle with my flippers. ‘Would you like to see them?’ 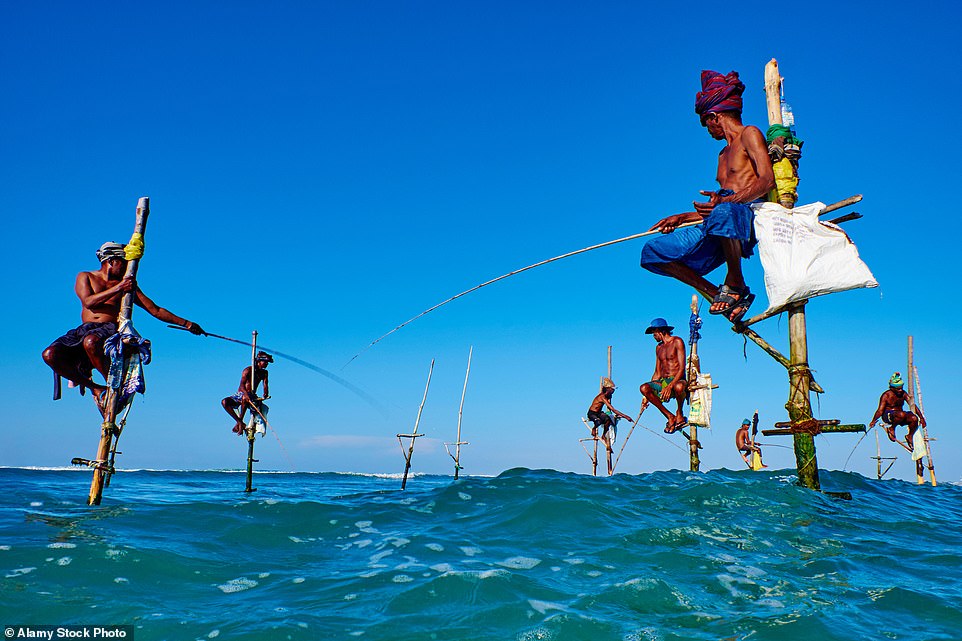 Stilt fishermen off the south coast of Sri Lanka. The tenth of the population that relies on tourism has suffered its worst year in memory

Sure, the blacktip reef sharks I swim with are small, about 4ft long. But their silhouettes look pretty disturbing as they pass by, grey and ghostlike.

Again, I’m almost alone when I reach the rock temple at Gal Vihara, and gaze on the four mighty statues of the Buddha. They’re among the most beautiful things I’ve ever seen, particularly the last of them, lying down, eyes closed, his hand seeming to cup his ear.

‘Not sleeping,’ the elderly attendant with the pencil moustache tells me. ‘Nirvana.’

I try a joke (‘He’s listening to Nirvana?’), but the old boy doesn’t seem to hear. By now my mood is as calm as a bodhisattva and I let it go.

Of course, I know my inner peace, born of blissful near-solitude, is at the cost of pain for millions of Sri Lankans.

‘In July and August, we had 350 tours booked,’ says my driver guide, Harold. ‘All of them were cancelled. English market, German market, Dutch market. All.’ 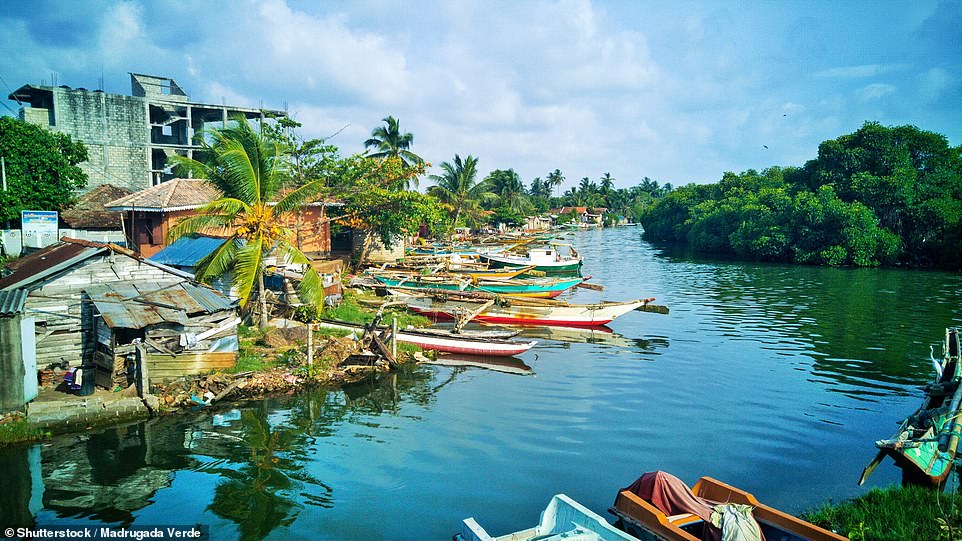 Negombo, which is renowned for its golden sand and safe swimming. There are also a pageant of colourful boats

The charming Harold, 51, who is married with three sons to support, has had to accept help from his boss to pay his rent. His wife has gone to work, in a factory, for the first time since they married. ‘My oldest son is working,’ he says, ‘but he earns a very small salary. So four people depend on me.’

While we drive towards Jaffna, Harold’s mobile rings with good news: his middle son, 20-year-old Jeewantha, has been offered a job as a trainee pastry chef at the Shangri-La Hotel in Colombo.

But isn’t that one of the hotels that was blown up in April? ‘Yes.’ And isn’t he worried about the boy’s safety? He isn’t, and he explains why.

Sri Lanka is a mainly Buddhist nation, ethnically Sinhalese. Historically, the strife — most notably in the civil war that blighted the country from 1983 to 2009 — has always been between this majority and the Tamil minority in the north, most of whom are Hindu. There are also Muslim and Christian minorities, but, broadly speaking, these are a peaceful presence in the country, neither hating nor hated. 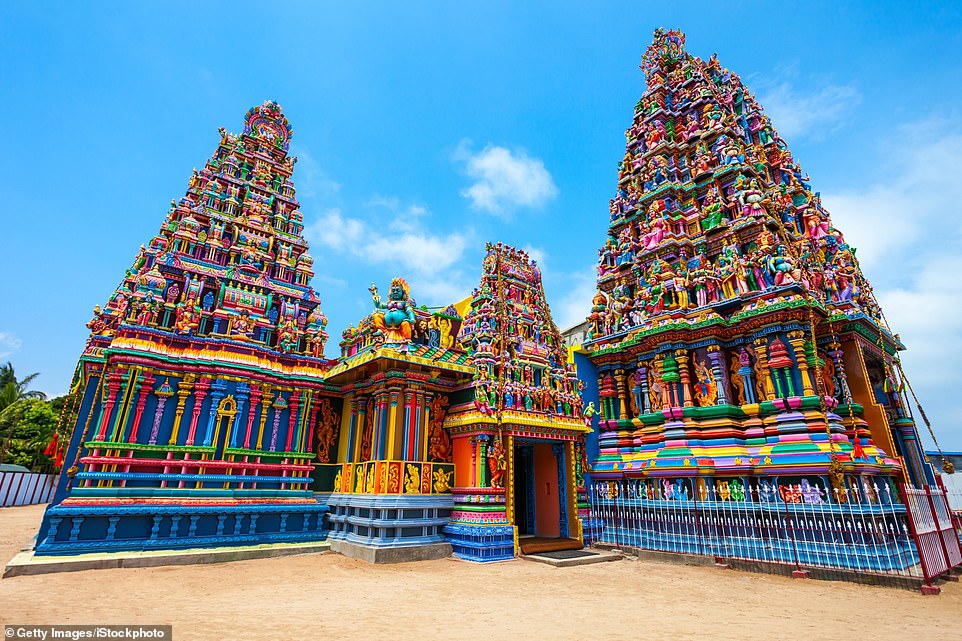 High season starts in Sri Lanka starts in November, so it’s not too late to book some winter sun. Pictured is Kali Kovil Trincomalee, a Hindu temple dedicated to the goddess Bhadrakali

To book a table at Lasantha’s restaurant at Giritale, email hotelwaana@gmail.com or call +94 76 931 8308. To book a snorkelling trip with Kaleel, email nawfeer2005@gmail.com.

Even during the war, bombs were aimed at government buildings, never at Christian churches, let alone hotels. The point is, there is no pattern of targeting tourist areas. ‘The attacks that happened this April were a one-off,’ says Harold

It’s confirmed wherever I go: in 2019, things have been tougher for tourism even than during the civil war.

‘It’s the worst period in 40 years,’ says Prasath, 58, the boatman who takes me on a tour of the lagoon at Negombo. This is one of the places that was bombed, but the pageant of brightly coloured fishing boats makes it easy to forget.

It’s my first morning, yet in a couple of hours on the uncrowded water I see enough to justify my entire trip: idle iguanas, macaque monkeys busy among the mangroves, fat fruit bats hanging like black lanterns from the taller trees.

On my last morning, I stop in at the Shangri-La Hotel for a cup of coffee. Since it was hit in April, the place has been restored to its former pristine condition: you wouldn’t know anything had happened here. A slim and smiley boy, the hotel’s newest pastry chef, asks me to write that Sri Lanka is ‘the best country in the world to travel to’.

I’m happy to say so. What’s more, new developments set to open in 2020 include the Pekoe House hotel in Kandy and a new Alila hotel at Koggala in the south.

High season starts in November, so it’s not too late to book some winter sun. And you really should. This country needs you.

Sri Lanka: Where to go… and the best places to stay

THE SOUTH: Galle, the coast and Yala 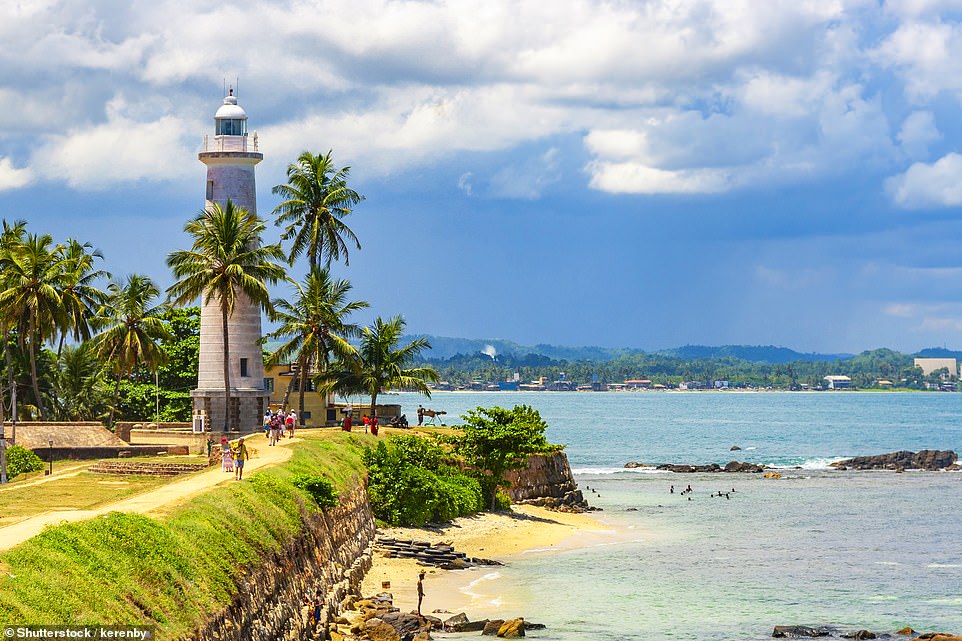 The city of Galle in the south of Sri Lanka. It is a charming Dutch colonial city with 16-century stone ramparts and an imposing clock tower in the old quarter

The gateway to the south is Galle, a charming Dutch colonial city with 16-century stone ramparts and an imposing clock tower in the old quarter.

Beyond Galle are beautiful beaches: Weligama, Mirissa, Unawatuna and Tangalle — though some shelve into deep water and have strong currents, which make swimming dangerous.

Along this stretch are many of the island’s emblematic stilt fishermen, who perch on tall wooden poles. Inland are villages and rice paddies dotted with toffee-coloured cattle.

Wildlife — be it leopard, elephant or exotic birds — is prolific in the Yala and Bundala national parks.

Cultural highlight: The pilgrimage town of Kataragama, one of Sri Lanka’s most important religious sites with colourful nightly ceremonies.

On or near the beach: KK Beach is a boutique hotel with ten rooms and suites, an infinity pool and ocean-facing restaurant. B&B doubles from £193 (kkbeach.com).  Overlooking the Indian Ocean and in 21 acres of gardens, Anantara Peace Haven Tangalle has 152 rooms and pool villas, three restaurants, an Ayurvedic spa and 25-metre pool. B&B doubles from £177 (anantara.com/en/peace-haven-tangalle).  Peacock Villa — a family-run, four-room guesthouse set in a private garden — is a five-minute walk from Mirissa beach. B&B doubles from £50 (peacockvilla.lk).

Near Yala National Park: Bordering Yala National Park, Chena Huts by the Indian Ocean has 14 thatched cabins with ensuite bathrooms and plunge pools. All-inclusive doubles from £640 with daily safaris (ugaescapes.com/chenahuts). Located on the beach, a few miles from Yala National Park, Jetwing Yala has 80 contemporary rooms spread across 38 acres, a 75-metre outdoor pool, two restaurants and a spa. B&B doubles from £116 (jetwinghotels.com/jetwingyala).  Close to the entrance of Yala National Park is Eco Island Sri Lanka, a campsite with eight tents with mosquito nets and private bathrooms. B&B tents from £61 (ecoislandsrilanka.com). 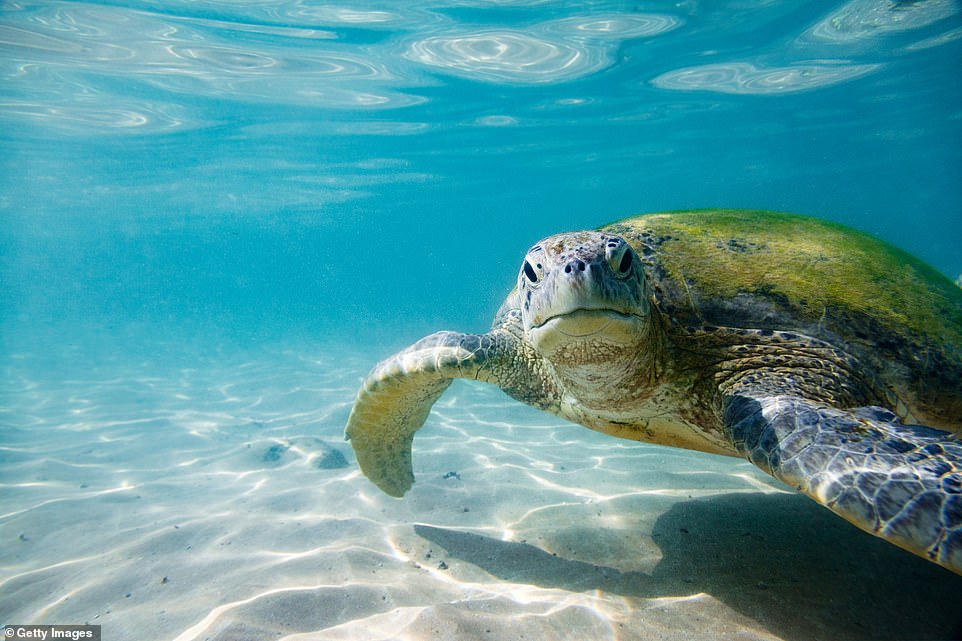 A green sea turtle on Hikkaduwa’s coral reef. Resorts such as Hikkaduwa and Negombo are popular with beach goers

When visitors touch down at Sri Lanka’s international airport, many bypass the urban sprawl of Colombo, Sri Lanka’s capital, and head to the west coast beaches.

Resorts such as Beruwala, the stylish Bentota and old hippy haunt Hikkaduwa to the south and Negombo (five miles north of the airport) are renowned for their golden sand and safe swimming.

Further north lies Kalpitiya, a top spot for kitesurfing and dolphin and whale-watching.

CENTRAL: Kandy and the Hill Country 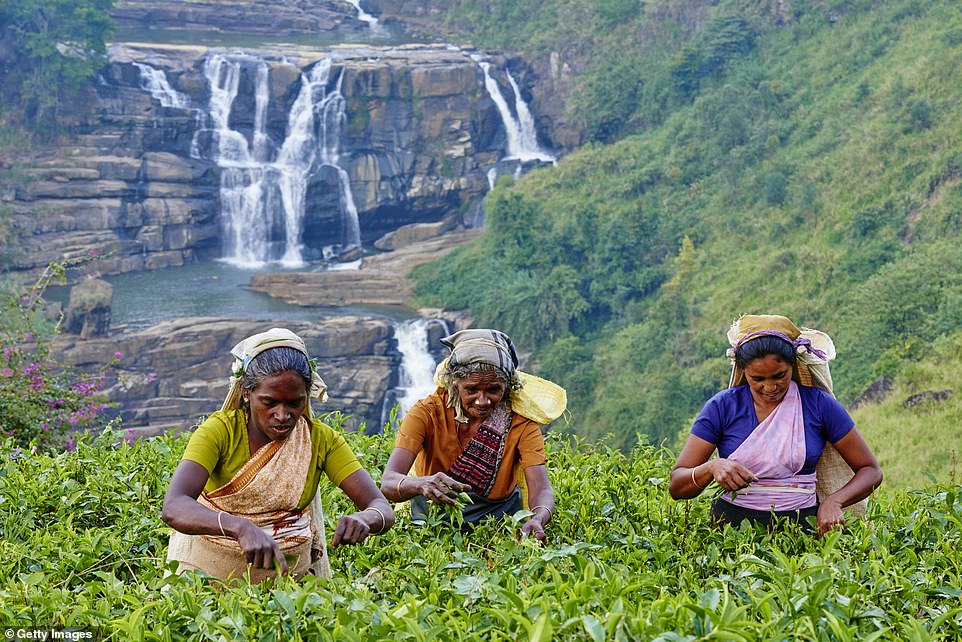 Tea pickers in the central province. The cultural highlight here is The Temple of the Tooth, which is the hub of the central highlands

Kandy, the cultural capital of the Sinhalese and home to its most important Buddhist shrine, the Temple of the Tooth, is the hub of the central highlands.

To the south is the Hill Country with regimented rows of tea plants, and the charming British colonial town of Nuwara Eliya.

East of Kandy is the dense forest of the rugged Knuckles mountain range. To the west is the Pinnawala Elephant Orphanage.

Cultural highlight: The Temple of the Tooth.

Where to stay: Originally a 1926 colonial planter’s bungalow, the Rosyth Estate House is set in a 62-acre private tea and rubber estate, with eight rooms, a huge Rock Villa comprised of two suites, a pool, spa and yoga sala. Half-board doubles from £197 (rosyth.lk).  Vista House is a simple villa with three bedrooms, four bathrooms, a guest pantry and a private garden. Doubles from £27 (vista-house-lk.book.direct). 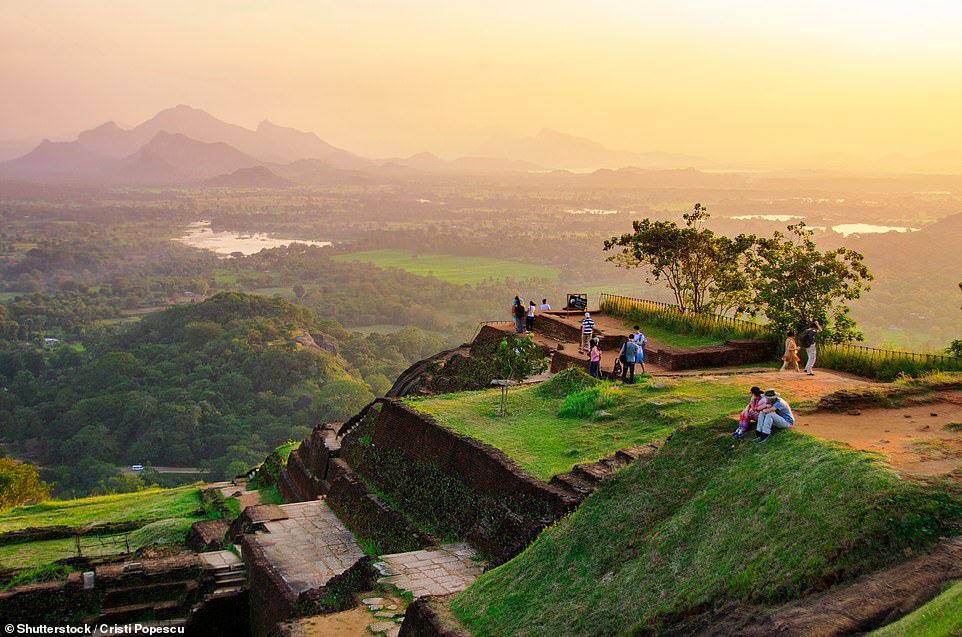 Five of Sri Lanka’s eight World Heritage Sites are in the Cultural Triangle. Pictured is Sigiriya on Lion’s Rock

Five of Sri Lanka’s eight World Heritage Sites are in the Cultural Triangle, which is defined by the cities of Anuradhapura to the north, Polonnaruwa to the east and Kandy to the south-west.

The 5th-century fortress of Sigiriya is a challenging 1,200 steps to the top. Ten miles north-west are the Dambulla caves decorated with colourful murals of Buddhist and Hindu deities.

Where to stay: Set on a ridge above a teak forest, Elephant Stables Dambulla has six villas (each sleeping up to four people) and a pool. B&B doubles from £147 (elephantstablesdambulla.com). Lak Nilla Guest House, a ten-minute drive from Polonnaruwa, has four simple rooms with ensuite bathrooms. B&B doubles from £25 (booking.com). 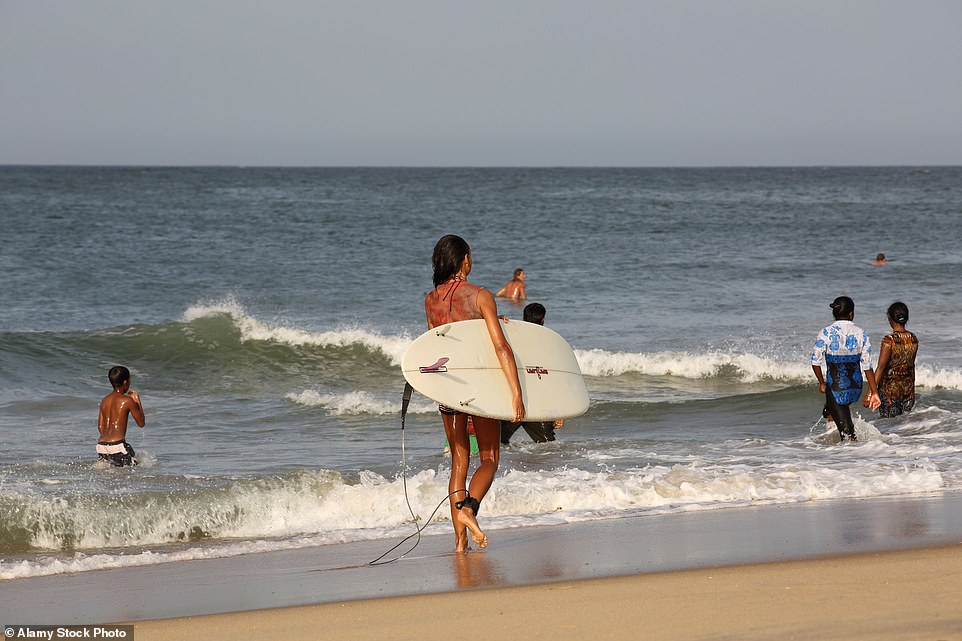 Passekudah, Kalkudah and Arugam Bay, pictured, are excellent for surfing and other watersports

Its cities, Trincomalee and Batticaloa, are charming colonial outposts ringed by deep-sea harbours and labyrinthine lagoons.

At Trincomalee, visit historic Koneswaram Kovil, one of the island’s holiest Shaivite temples.

The beachside villages of Uppuveli and Nilaveli are diving and snorkelling hotspots, while Passekudah, Kalkudah and Arugam Bay are excellent for surfing and other watersports.

Where to stay: The only hotel on Kalkudah beach, Karpaha Sands, has 17 tented suites, an infinity pool and a restaurant. Doubles from £166 (karpahasands.com).  Hideaway is a rustic retreat with 14 rooms in tropical gardens, a restaurant and yoga lessons. B&B doubles from £56 (hideawayarugambay.com). A short walk from Uppuveli beach, Anantamaa Hotel has 28 rooms, two pools, a spa and restaurant. B&B doubles from £54 (anantamaa.com). 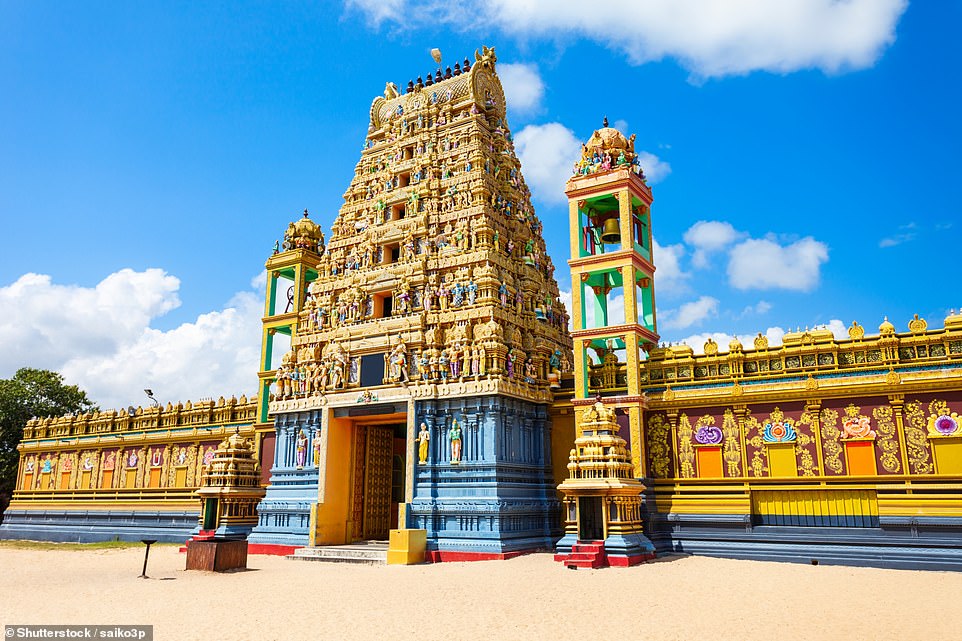 Jaffna is a charming city with a discernible Indian influence and vibrant Tamil culture. Pictured is the Vallipuram Alvar temple

Jaffna is a charming city with a discernible Indian influence and vibrant Tamil culture, despite the Dutch architecture.

Connected to the mainland by a mile-long bridge is Mannar Island where donkeys roam freely under Baobab trees, and the white beach stretches for miles.