Whether they’re bold, shy, aggressive or even polite, squirrels have different personalities just like humans, a new study shows.

The study is the first to document personality in the chipmunk-like species, which is asocial, meaning it generally avoids social interaction.

WHAT IS THE GOLDEN-MANTLED GROUND SQUIRREL?

It’s generally found in coniferous and mixed coniferous-hardwood forests. It is also common in mountainous areas.

The golden-mantled ground squirrel cleans itself by rolling in the dirt and combing its fur with its teeth and claws.

They are relatively small, giving them little opportunity to form the tighter social bonds common in larger ground squirrels, which typically spend more time in family units while reaching maturity.

‘This adds to the small but growing number of studies showing that individuals matter,’ said the study’s lead author Jaclyn Aliperti at the University of California, Davis.

‘Accounting for personality in wildlife management may be especially important when predicting wildlife responses to new conditions, such as changes or destruction of habitat due to human activity.’

For instance, bolder, more aggressive squirrels may find more food or defend a larger territory, but their risky behavior may also make them vulnerable to accidents or being captured by predators.

Golden-mantled ground squirrels are generally considered an asocial species, meaning they keep to themselves and can even be hostile to others of the same species.

They are relatively small, giving them little opportunity to form the tighter social bonds common in larger ground squirrels, which typically spend more time in family units while reaching maturity.

For the study, Aliperti and her team of co-authors conducted the experiments at the Rocky Mountain Biological Laboratory in Gothic, Colorado, which has been conducting tests for more than 30 years. 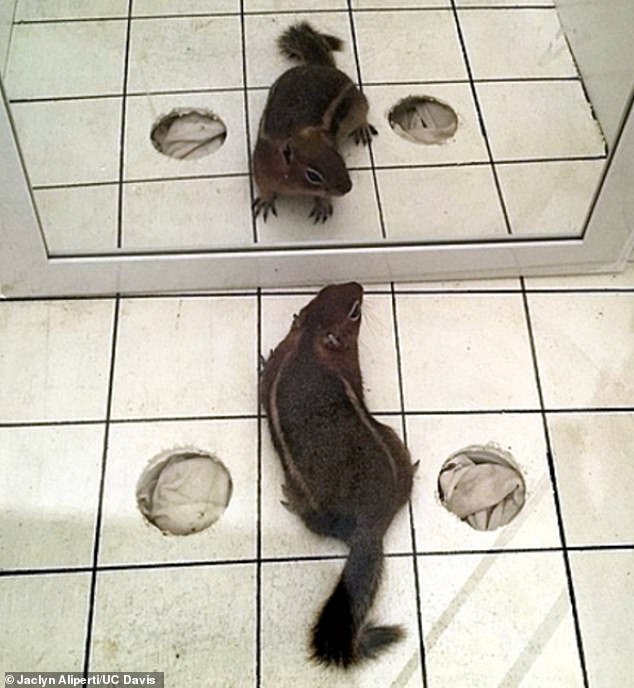 THE FOUR TESTS THE SQUIRRELS WERE PUT THROUGH

– Novel environment: Squirrels were placed in an enclosed box with gridded lines and holes.

– Mirror: Squirrels are presented with their mirror image, which they do not recognise as their own.

– Flight initiative: Squirrels were approached slowly in the wild to see how long they wait before running away.

– Behaviour-in-trap: Squirrels were caught, unharmed, in a simple trap and their behaviour briefly observed.

For novel environment, the squirrels were placed in an enclosed box with gridded lines and holes.

Secondly, for mirror, squirrels were presented with their mirror image, which they do not recognise as their own. Time was measured ‘interacting’ with the mirror, looking toward the mirror and looking away from the mirror.

Interaction with the mirror took the form of either the forepaw or the nose touching the mirror surface.

‘[This is] similar nose-to-nose and forepaw-to-body greets commonly observed under natural conditions and interpreted to be amicable social interactions, usually among littermate pups and their mother,’ the authors say.

The third test – flight initiative – allowed the researchers to work out where each individual squirrel fell on ‘a boldness-shyness spectrum’.

Squirrels were approached slowly in the wild to see how long they waited before running away, and how far they fled.

The distance at which an animal flees from an approaching human – a perceived threat – measures individual differences in shyness.

‘If we were consistently able to get closer to a given squirrel, that squirrel was considered to be more bold,’ said Aliperti.

‘Shyer squirrels ran away when it was a greater distance from the researcher – they got scared off faster.’

Lastly, behaviour-in-trap involved squirrels being caught, unharmed, in a simple trap so behaviours could be briefly observed – for example, docility, which can be measured as an individual’s tendency to remain calm when trapped. 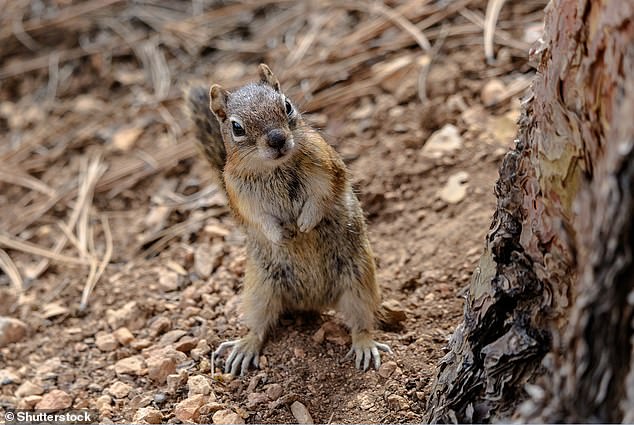 The golden-mantled ground squirrel (Callospermophilus lateralis) is often mistaken for a chipmunk due to its appearance. It has grayish-brown fur on top with two white stripes bordered by black stripes on its sides

Overall, the study found that the squirrels that showed themselves to be bolder had larger core areas where they concentrated their activity, compared to shy individuals.

Core areas are defined as a range in which an animal or group of animals may rest securely or take food to be eaten.

‘All animals have something called a home range, which defines the total area an animal uses to carry out its day-to-day activities (like look for food, check up on potential mates or family members),’ Aliperti told MailOnline.

‘A core area defines the part of the home range where an animal spends most of its time.

‘It’s important because it’s the space used most intensively by an animal, presumably because that’s the part of its home range that has the best quality habitat or best access to resources in general.’

Bold, active squirrels also moved faster, and squirrels that were bolder, more aggressive and more active had greater access to perches, such as rocks.

Perch access is important because it can provide a better vantage point for seeing and evading predators. Interestingly, perch access was also associated with sociability.

Overall, individual golden-mantled ground squirrels that tend to be more social seem to have an advantage, the authors report. In fact, being more social could save an individual’s life.

It can influence a squirrel’s ability to survive and reproduce, which could scale up to the population or community level.

Luckily, the golden-mantled ground squirrel is under no conservation threat, and populations are listed as ‘stable’ on the IUCN’s red list.

But the findings suggest that understanding how an animal’s personality influences use of space is important for wildlife conservation.

‘We hope our study will inspire future research that links animal personality with spatial ecology to inform wildlife management in natural ecosystems,’ the authors say in their paper, published in the journal Animal Behaviour.

Squirrels are like human parkour athletes when it comes to jumping from one place to another at speed, a new study shows.

Researchers at University of California, Berkeley filmed squirrel movements as the creatures worked their way around a homemade outdoor obstacle course.

The adorable critters invent ‘parkour-like’ maneuvers as they go to achieve particularly difficult landings, according to the findings. 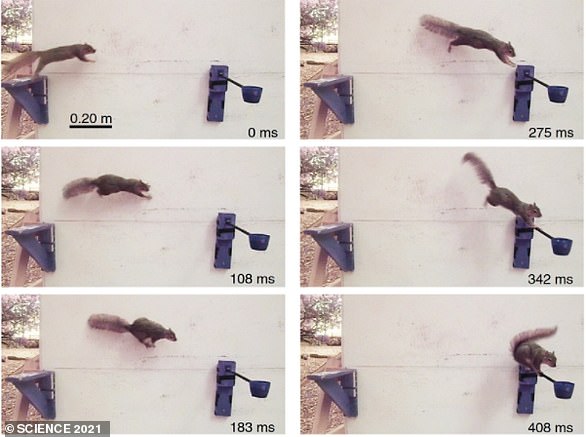 They can expertly reorient their bodies to push off vertical surfaces during tricky jumps between branches in the quest for nuts, the study shows.

The athletic and dangerous art of parkour involves running, jumping, climbing and quadrupedalism (using all four limbs) while moving through various terrain.

It involves running, jumping, climbing and quadrupedalism (using all four limbs) while moving through various terrain.

According to professional parkour athlete Lorena Abreu, parkour is more functional and efficient than ‘freerunning’, which is more about creative flips and trips, although the two terms are used interchangeability.