A former undercover police officer told an inquiry yesterday that sleeping with women from political groups was like sampling drugs when investigating dealers.

The officer, who went under the cover name Peter Fredericks, said his colleagues had ‘no choice’ but to deceive the activists in order to progress their investigations.

Officers from the Special Demonstration Squad (SDS), a secret Special Branch unit, would trick women into relationships and some even had children with them.

The officer, whose real name cannot be revealed, began as a Metropolitan Police detective in the 1970s before moving into a squad which later became the SDS.

He was asked at the hearing in London yesterday when he first learned that some former SDS members ‘engaged in sexual relationships in their undercover identity’.

New Scotland Yard: The officer, whose real name cannot be revealed, began as a Metropolitan Police detective in the 1970s before moving into a squad which later became the SDS

The officer said he had only found out about this ‘within the last two years’ after being asked to take part in the inquiry – and was then asked if he was ‘surprised’.

He replied: ‘I was surprised that the matter had been raised. If you ask me to infiltrate some drug dealers you can’t point the finger at me if I sample the product.

What is the Undercover Policing Inquiry investigating and why has it been criticised?

The Undercover Policing Inquiry (UCPI), which was set up in 2015 by then-home secretary Theresa May, is investigating the tactics of two police units over 40 years.

It was launched after a series of public disclosures about undercover tactics sparked heavy criticism.

Part of the probe is examining the role of police intelligence gathered by undercover officers in the blacklisting operations.

Chairman Sir John Mitting’s rulings mean the cover names of 51 officers must remain secret, along with 119 of the real names of officers and staff.

But the inquiry, which has cost £30 million to date, has attracted criticism from people targeted by undercover officers for lack of transparency and limited access to hearings.

The only way to view the video stream of witnesses giving evidence is to have registered in advance to attend a hotel in London with 60 seats available.

‘If these people are in a certain environment where it is necessary to engage that little more deeply, then shall we say I find this acceptable, but I do worry for the female and any children that may result from the relationship, so yes, it shouldn’t be done.’

Ruth Brander, who is representing some of the activists spied on, later asked the officer to clarify the comparison between sexual relationships and drugs.

He replied: ‘I’ve only been given a few seconds to think about this; the question was asked just a few minutes ago. But it’s hugely confusing.

‘I do have a particular regard for the wellbeing of children particularly, and, yes, for women, and everyone else, and to be – to me, the subject of an act of – you could call it deception, you could call it anything you like, it can’t be nice and I think we ought to find a better way than that.

‘But perhaps – my view is perhaps they had no choice.’

Speaking later to the Times, environmental campaigner Helen Steel, who was tricked into a two-year relationship with an undercover officer, condemned the officer’s comments.

She said: ‘The idea that they didn’t have a choice is a complete lie. Comparing women to a product that you can consume is grossly offensive and sexist.’

On Wednesday, the inquiry heard an undercover officer spying on a women’s liberation group filed reports on members baking, attending a jumble sale and claims that one of them had an affair.

In a report from December 1971, the officer, who used the name Sandra Davis, reported back to bosses that members of the Women’s Liberation Front (WLF) were planning to attend a children’s Christmas party organised by the Black Unity and Freedom Party. 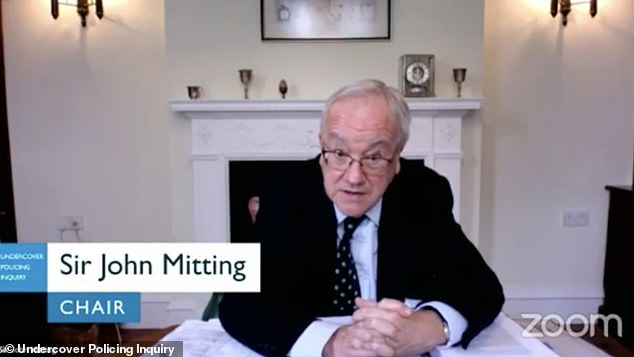 Rulings by Undercover Policing Inquiry chairman Sir John Mitting (pictured) mean the cover names of 51 officers must remain secret, along with 119 of the real names of officers and staff

Organisers had asked for donations of cakes and sweets, and these details were relayed back to her bosses in the SDS, the Undercover Policing Inquiry was told.

And on Tuesday, the inquiry heard an undercover police officer encouraged trade unionists to firebomb a charity shop in a bid to get them sent to prison.

Dave Smith, secretary of the Blacklist Support Group, said the officer, known as Carlo Neri – active between 2000 and 2006 – was an ‘agent provocateur’ who set out to deliberately ‘entrap’ activists.

Members of trade unions were blacklisted from construction jobs after the groups were infiltrated by undercover officers.

The first phase of the inquiry has now finished, with phase two set to start in March.