Harry Kane has been the overwhelming shining light for Tottenham over the past half a decade but was accused of negatively impacting the team following their defeat by Chelsea at the weekend.

Roy Keane fumed at his poor leadership and his failure to call out his team-mates errors, while Gary Neville said he looked ‘despondent’ towards the end of their 3-0 London derby defeat.

Kane’s underwhelming performance even led ex-midfielder Jamie O’Hara to claim he preferred watching Spurs earlier in the season when they were without their star forward, believing he is slowing the play down. 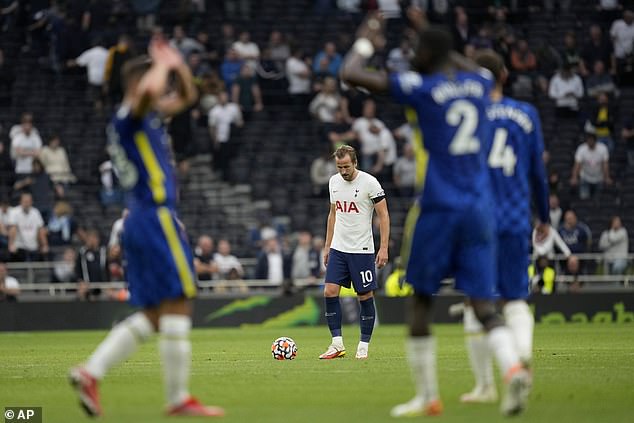 Spurs boss Nuno Espirito Santo would not come down on the England captain as harshly, suggesting his regular positioning away from the opposition box was a ‘product of the team’.

But a run without a goal from his first four league games for the first time since 2015-16 must be a concern for both player and manager.

A summer hangover following a run with England to the Euro 2020 final and a failed mega-money move to Manchester City has probably contributed to the dearth of goals in his game, but that will be of little comfort to Nuno in any case.

The early part of the season has never seemed to bring out the best in Kane over the years in any case.

It took him until 2018 to net a Premier League goal in August for the club, a rut lasting a total of 1064 minutes, 15 matches and 49 shots before he finally broke his duck with a goal against Fulham. 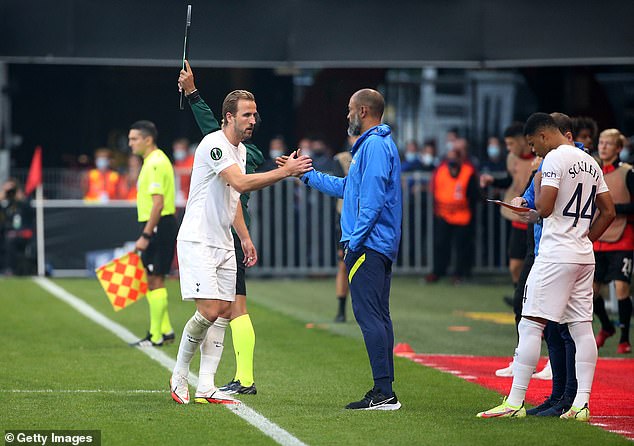 He has since improved on that record, but statistics provided by Opta demonstrate the extent to which he appears to start slowly at the start of a new campaign.

His highest return in terms of goals after six games of a season is four, which came in the 2017-18 season and 2019-20 campaign. He has half as many this season.

But there are other areas which provide a more alarming set of results. The 28-year-old has recorded just half the number of shots on target that he had managed at this stage in 2020-21, and he has yet to register an assist either.

Kane has seen 10 more minutes of action than he had at this point last season, but in 2020-21 he had already scored on three occasions as well as laying on five assists for his Spurs team-mates.

Four of those did come in a single came when he became the first Englishman to provide that number of assists in 90 minutes at Southampton, but there has been no sign of that creativity so far this term. 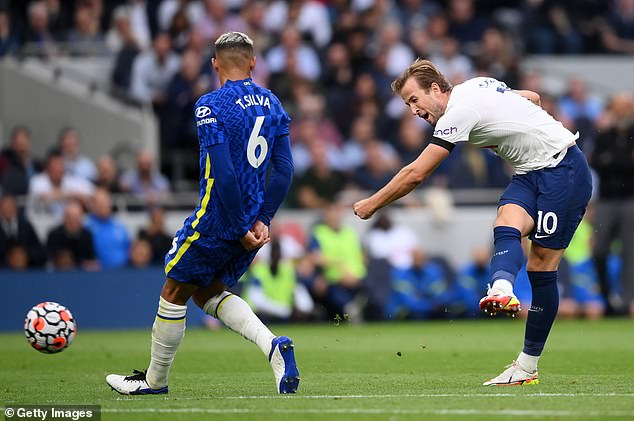 The most worrying statistic however is the fact he has managed just nine shots in his first six games, and although the number of minutes played is inferior to many of the previous seasons, it is a return not commensurate to the talent the England captain no doubt possesses.

His shot conversion rate, somewhat surprisingly, is the joint-highest it has ever been, matching the 22.2 per cent he managed at this stage in 2019-20 and far exceeding the 13.6 per cent of last season.

But Kane’s ability to finish once in scoring positions is unquestionable. It is arriving in those situations that has been a regular dilemma for him, especially since there were similar concerns about him following the opening two games of the Euros. 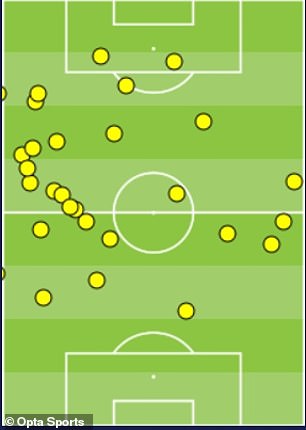 Kane’s touch map in the first half v Chelsea 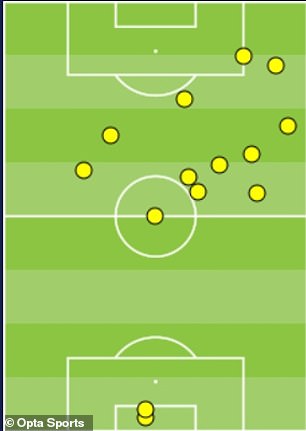 The reason many believe to be behind that is the rather deeper position he appears to be occupying, which came to light against Chelsea once more.

Perhaps Nuno believed Kane would have more freedom to roam from wide as one of the two – alongside Giovani Lo Celso and later Bryan Gil – in behind Son Heung-min.

But Kane did not have a shot on target until more than an hour had passed, by which time Chelsea were 2-0 up thanks to goals from Thiago Silva and N’Golo Kante.

A pitch map of his touches during the 90 minutes at the Tottenham Hotspur Stadium on Sunday demonstrates just how deep Kane appeared to be operating, leaving Spurs fans frustrated that he appeared to be doing more than one job.

In the first half, Kane had just two touches inside the Chelsea penalty box, although there were still some potentially encouraging signs as he regularly got on the ball on the left-hand side and appeared willing to shift the angle of attack by moving more centrally and to the right.

But, as a result of Spurs’ complete second-half collapse, the 28-year-old managed just 14 touches in the second period of the game, only one of which came inside the Blues area as the visitors took control.

Kane experienced a great deal of joy last season when combining with South Korean Son in a partnership that broke a Premier League record.

When the former Bayer Leverkusen star crossed for his English team-mate to score in a win against Crystal Palace in March, it meant the pair had assisted one another for a 14th goal in 2020-21.

That broke the all-time competition record of 13 set by Alan Shearer and Chris Sutton for Blackburn Rovers in 1994-95.

Son and Kane’s connection was no better demonstrated than that aforementioned 5-2 win at St Mary’s in September last year, in which the South Korean grabbed a hat-trick.

But 12 months on, there appeared to be little semblance of that partnership that had blossomed last season, with the duo exchanging just 11 passes between themselves at the weekend. 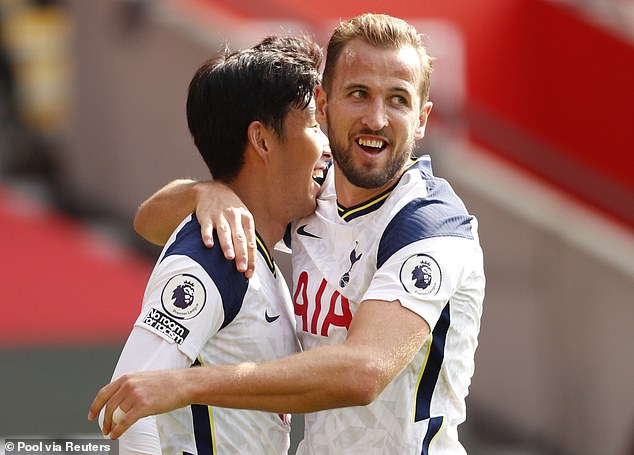 Kane found Son on just five occasions throughout the 90 minutes, and there was only one more exchange between the duo when they swapped roles.

No doubt that space against Chelsea’s defence is difficult to find, and if found is often reduced immediately by one of Antonio Rudiger, Thiago Silva or Andreas Christensen.

But it appears Spurs did not allow themselves to utilise the one weapon and combination in their arsenal which could have caused Thomas Tuchel’s men a few problems at the weekend.

The answer to their problems appears rather simple on the surface, with a higher average position for Kane likely to provide more support for Son and more menace for Spurs as a team going forward. 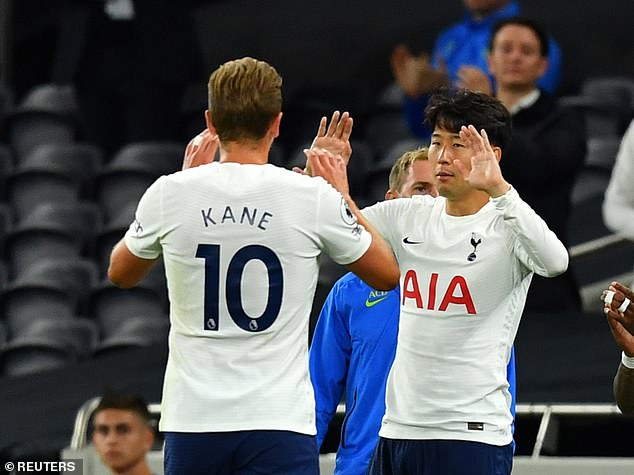 But it remains to be seen whether that move would fit into the tactics of Portuguese boss Nuno, who would only give generic answers when he was asked why Kane had played so far away from the Chelsea box.

Wolves are up next in the Carabao Cup but what is for sure is that Spurs will need Kane and Son firing once more with the north London derby against Arsenal up next on Sunday afternoon.

The duo were at the heart of the 2-0 win against the Gunners in December last year, running the show and netting a goal each.

The pair were deprived of repeating the trick at the Emirates Stadium in March when Son went off with a hamstring injury early in the first half of their 2-1 defeat. 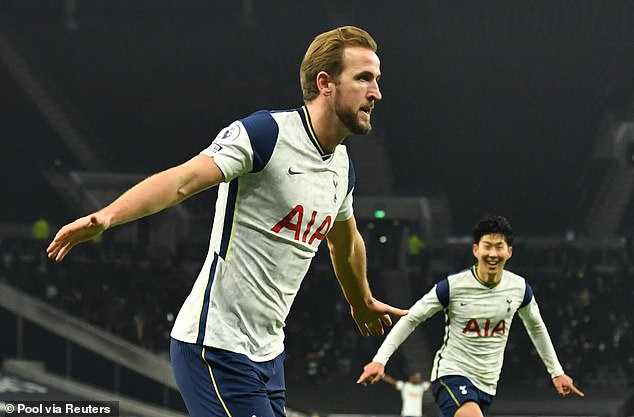 Kane has scored 11 goals in 15 games against Arsenal, who are next up in the Premier League

But expect the majestic curling effort at the old White Hart Lane in 2015-16, most of his strikes against Arsenal have come inside the box, where he has caused their centre-backs no end of problems both in the air and with his intelligent runs.

He must therefore be given the chance to trouble Ben White and Gabriel Magalhaes in the same way by playing centrally or at the very least higher up the field, or Spurs could be on the end of a third straight Premier League defeat and level on points with their arch rivals by the end of the weekend.

Nuno has called on Kane to put his summer disappointment behind him, but the Portuguese must now offer the England star the tools he requires to return the fear to opposition defences when they come up against him.