Pole-dancing bear! Rare white ‘spirit bear’ gyrates in hilarious footage as it finds the ideal place to scratch an itch

This is the moment a rare Kermode bear is spotted standing on its hind legs to have a good scratch against a wooden power pole.

Footage recorded in Terrace, British Columbia, Canada, shows the bear – also known as a ‘spirit bear’ because of its white coat – wandering up to the post.

After a quick glance upwards, the bear rears up and leans its back against the pole.

A rare Kermode bear stands up on its hind legs and leans against a wooden power pole Terrace, British Columbia, Canada, before moving up and down to scratch its back before grabbing hold of the post with a paw and trying to nibble it

It then raises its snout so the top of its head is against the post and starts enthusiastically rubbing up and down against it.

The bear reaches a paw up and grabs hold of the pole before wiggling its hips rhythmically, in what looks surprisingly like dancing.

After a quick gnaw at the pole, it has another scratch and then lumbers off into the forest. 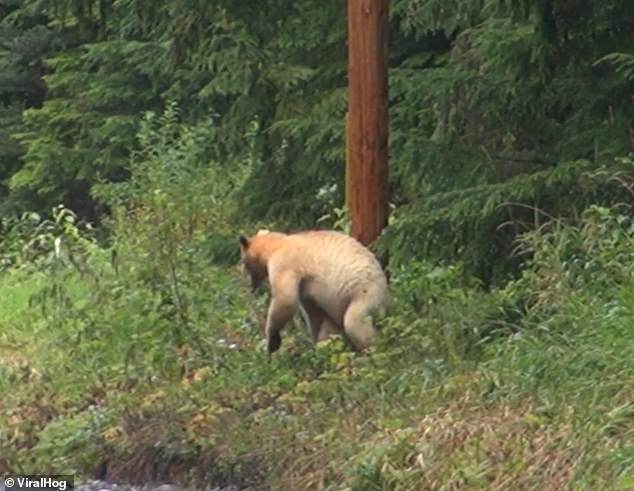 After its back is suitable scratched, the bear climbs down from its pole and wanders off back into the forest

The video was originally recorded on August 27 and has recently re-emerged after being shared on social media.

Kermode bears, also known as spirit bears, are a sub-species of the American black bear with a rare gene that turns their fur white or cream.

Though not considered endangered, there are believed to only be around 400 Kermode bears left in the wild.

Only one in ten black bears possess the gene that turns their fur light and in order for it to be passed onto baby bears, both parents must have it.