Speculation Daniel Ricciardo’s ‘F.E.A.’ message on his helmet has a VERY pointed meaning as Aussie’s struggles intensify after he qualifies 14th at Monaco Grand Prix

Australian F1 driver Daniel Ricciardo has sported a handwritten ‘F.E.A.’ message on his racing helmet while qualifying 14th at the Monaco Grand Prix – leading to speculation it’s a very blunt response to critics who have slammed his recent form.

The McLaren star has had a shocking run since moving from Renault in 2021 and there are indications he could be forced out of F1 at the season’s end.

Ricciardo was spotted with the initials ‘F.E.A’ written on the rear of his helmet in Saturday’s qualifying session at the famous track.

Daniel Ricciardo’s helmet was marked with the initials ‘F.E.A’ for Saturday’s qualifying race, with fans speculating it stands for ‘f**k ’em all’

Some fans believe the acronym stands for ‘f*** em all’, a phrase that could be aimed at Ricciardo’s critics and possibly even McLaren.

Earlier in the week, team boss Zak Brown said he was ‘disappointed’ in Ricciardo’s form with the team since his 2021 Italian Grand Prix victory.

‘We obviously would like to see Daniel much closer to Lando and have a good inter-team battle,’ the McLaren CEO told Sky Sports.

‘Daniel is just not comfortable yet with the car. We are trying everything we can, again it was a disappointing weekend.’

Ricciardo has finished in the top 10 just once this season and has been outscored by teammate Lando Norris in all but two races so far.

The eight-time F1 winner said he struggled to find rhythm in the McLaren throughout practice and qualifying in Monaco. 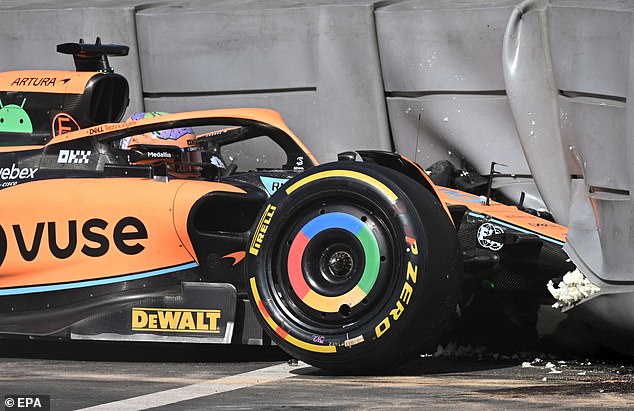 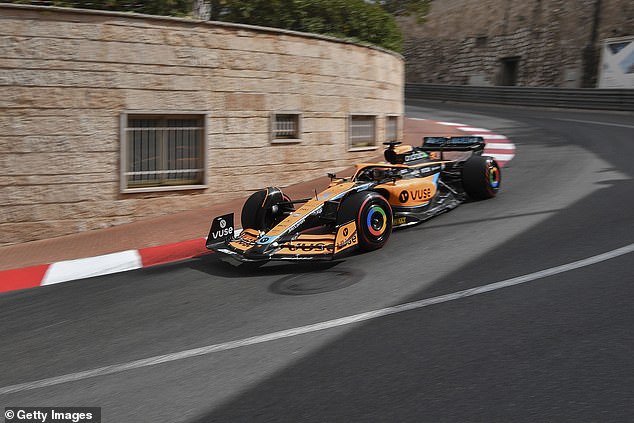 The Aussie could only get his car up to 14th on the grid, nine spots behind McLaren’s number one driver Lando Norris

‘In Q2 it just – you can see on your data as well, you’re just not making the gains that you should with track evolution and all of this,’ Ricciardo told Sky Sports post the qualifying race.

‘It ultimately becomes very difficult to feel where the limit is and how much more there is to go.

‘I don’t know what the word is. It’s frustrating … it’s just confusing to not make these kinds of natural steps that one should.’

Ricciardo’s first stint around the tight Monaco track was his best, finishing seventh in the first practice session.

The 32-year-old only managed to complete two laps in practice two on Friday, as he lost control around a corner and damaged his front wing after crashing into the barrier. 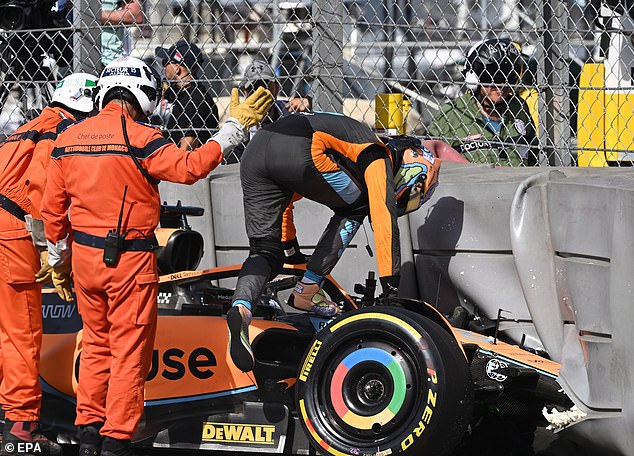 Ricciardo climbs out of his McLaren after his crash on Friday. He said he struggled to find rhythm and push the car to its limits on the tight, twisty track

It has been reported IndyCar driver Colton Herta could move to the McLaren team and kick the Australian out of his position.

The Perth-born driver won seven of his eight victories with the Red Bull team before moving to Renault in 2019.