EXPRESS INFORMER > News & Politics > Spare us! Harry reveals Meghan kept a diary which may form the basis of her own book

Spare us! Now it’s Meghan’s turn, as Harry reveals she kept a diary during her turbulent years in the Royal Family which may form the basis of her own book

Meghan Markle kept a diary during her turbulent years in the Royal Family which may form the basis of her own book.

Prince Harry’s memoir ‘Spare’ reveals the Duchess of Sussex recorded her thoughts and feelings in a journal.

‘I read them as a citation, a remembrance, a proclamation.’

Prince Harry’s memoir ‘Spare’ reveals Meghan Markle recorded her thoughts and feelings in a journal, which some speculate may form the basis of her own autobiography

Last week the MoS revealed the duchess may already be writing her own memoir as part of a four-book deal the couple has with publishers Penguin Random House.

Harry received a reported $20 million advance for Spare, the duchess has already published her children’s book ‘The Bench’ and a third book, a health and wellness guide, is said to be in the works.

It is thought the fourth and final book will be Meghan’s autobiography.

A source in the US said: ‘Meghan has always kept diaries, from the time she was a child. Harry saying she kept a journal is unsurprising.

‘She has journaled all her life. It would make total sense for Meghan to do her own book and base it on diaries she kept during her time in the Royal Family.’

Harry may have purposely left out allegations of racism against the royal family which the couple first raised during their infamous Oprah Winfrey interview – to give Meghan a ‘clear run’ at the topic in her book.

During the 2021 interview Meghan claimed there was concern within the royal family about her baby’s skin tone when she was pregnant with son Archie. 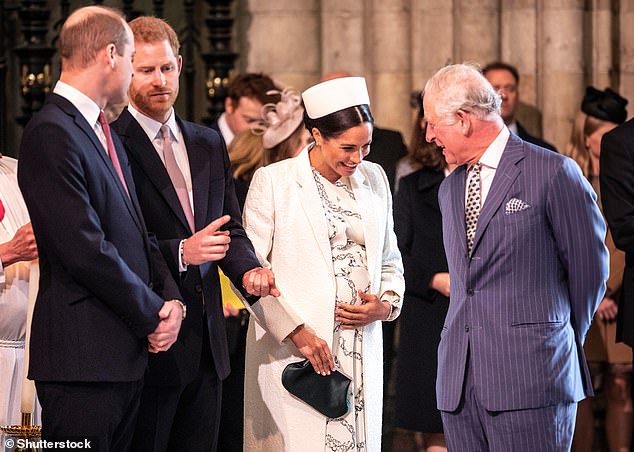 During her Oprah Winfrey interview in 2021, Meghan claimed there was concern within the royal family about her baby’s skin tone when she was pregnant with son Archie (pictured).

There were several ‘concerns and conversations about how dark his skin my be when he was born,’ she said, in one of the most explosive claims in the Oprah interview.

A publishing source in the US told the MoS: ‘Because of the shocking nature of that claim, a story which everyone around the world was talking about and still talks about, it was assumed that Harry would address the incident in Spare.

‘It’s one of the main stories in their narrative and it’s the one question everyone wants an answer to.

‘Which member of the royal family questioned the colour of Archie’s skin?

‘But there is not a single word about it in Spare.

‘The assumption in the publishing world is that he must have left it out of his book to allow Meghan to have as a bombshell for her book.

‘Harry barely addresses racism in Spare. That feels calculated. Meghan will have a clear run at addressing all the alleged racism.’

Harry reportedly wanted to cancel publication of his book after visiting Britain for the Queen’s Diamond Jubilee last summer.

The team working on Spare were told: ‘He’s pulled it. He doesn’t want to do it.’

While Harry later changed his mind after the death of the Queen in September, sources say the original manuscript was packed with ‘Americanisms’ and had to be ‘translated’ into ‘British’ English.

One said: ‘It was extraordinary. A member of the royal family describing everything as ‘awesome’ and using phraseology like: ‘We had gotten ourselves into a difficult situation.’

‘We had to go through the whole manuscript to make it sound like he was actually English.’

Some have speculated that Meghan contributed passages to Harry’s book and may have even helped edit the manuscript. 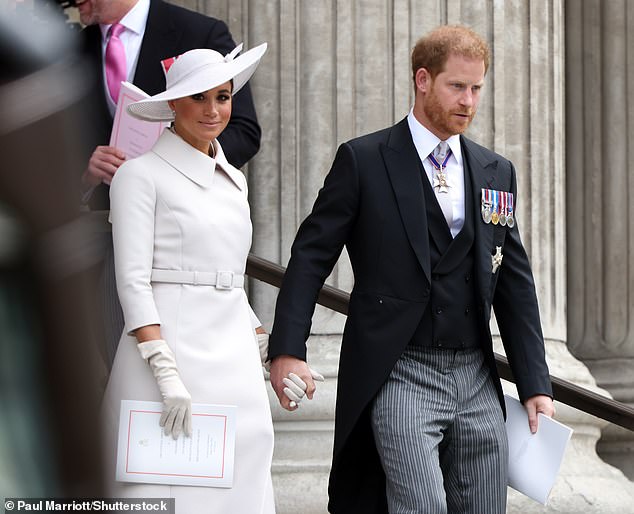 Harry may have purposely left out allegations of racism against the royal family which the couple first raised during their infamous Oprah Winfrey interview – to give Meghan a ‘clear run’ at the topic in her book. Pictured: The couple in the UK during the Platinum Jubilee last June