A Spanish town that cut itself off from the outside world more than a month ago in an ambitious attempt to stop coronavirus reaching its residents still has zero infections.

Zahara de la Sierra, which sits high above the Andalusian countryside in southern Spain, has so far managed to keep the global pandemic at bay from its elderly population.

The hillside fortress town has used a strict regiment of disinfecting the streets and vehicles as well as closely monitoring who comes and goes to keep its inhabitants safe.

Santiago Galvan, the of mayor of Zahara de la Sierra, blocked all but one of the town’s five entrances on March 14. 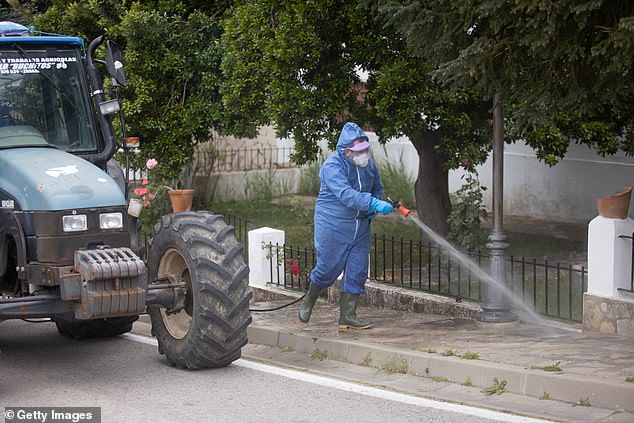 A volunteer disinfect the streets of Zahara de la Sierra, southern Spain, on Monday as part of the town’s regiment of cleaning to keep out coronavirus 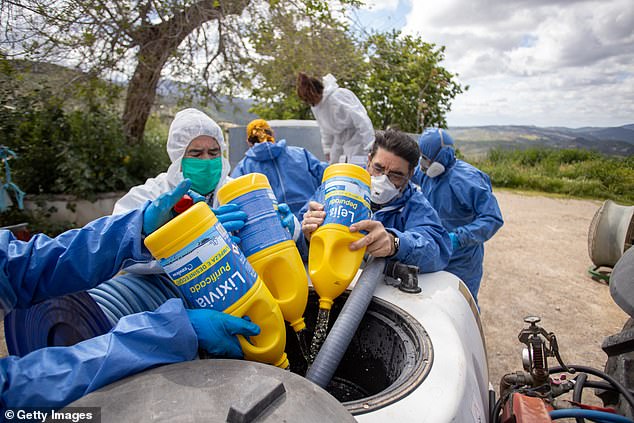 A checkpoint on the one road into the town that remains open is manned by a single police officer.

Each vehicle must also drive through a make-shift ditch to disinfect its tyres when entering and exiting the town.

Nearly a quarter of Zahara’s inhabitants are older than 65 and more than 30 residents live in a care home.

The mayor’s no-nonsense approach to the virus has been praised by locals, especially the elderly. 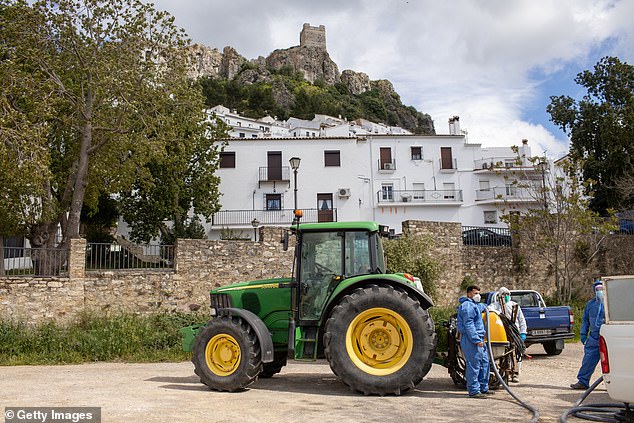 Zahara has mostly cut itself off to the outside world since March 14, a decision broadly supported by its residents 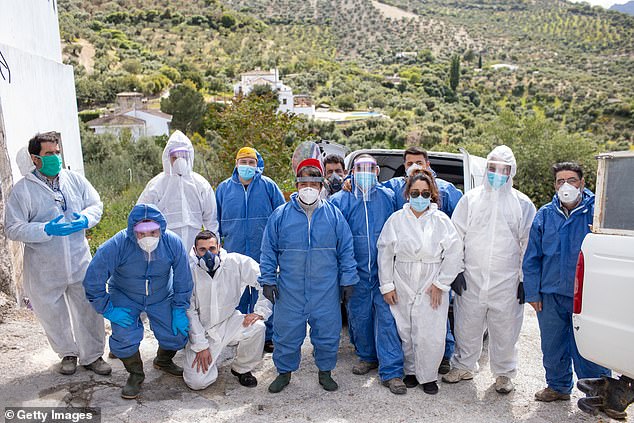 The volunteers pose before going to work to disinfect the town. Nearly a quarter of Zahara’s inhabitants are older than 65, a demographic group at greater risk of infection 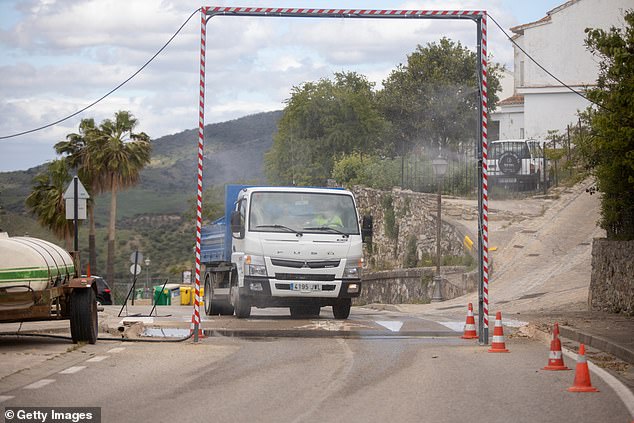 Towns and villages nearby Zahara have seen infections and several coronavirus fatalities.

Around 22 miles away in the town of Ubrique, 16 people living in a nursing home died of coronavirus and six miles north of Zahara, a woman also died f the disease.

Shortly after Spain announced it was extending its state of alarm, authorities in the town had to turn away French and German tourists who were unaware of the local government’s measures.

Zahara is used to hunkering down during a time of crisis, as both Moor and Christian invaders have fought over the town during the Middle Ages and it was sacked by the French in 1812. 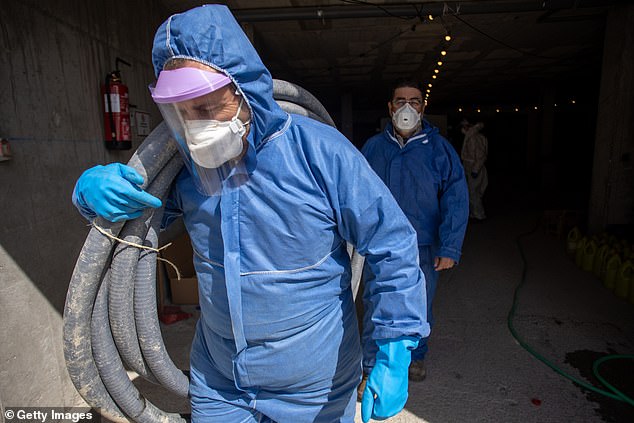 Volunteers preparing to disinfect the town of Zahara de la Sierra, which has mostly cut itself off to the outside world 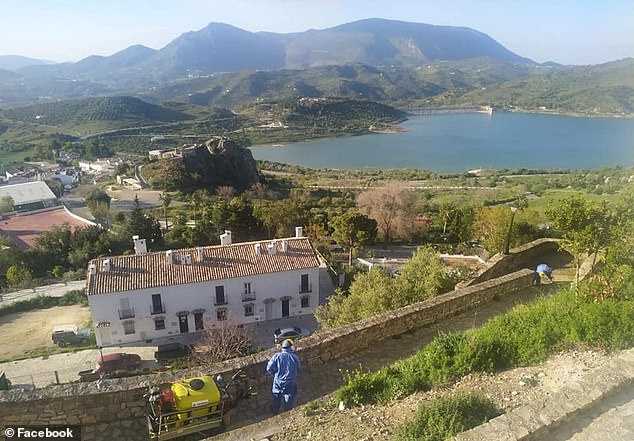 Zahara de la Sierra, high in the Andusian mountains, was once fought over by the Moors and Christians in the Medieval times because of its perfect position overlooking a valley 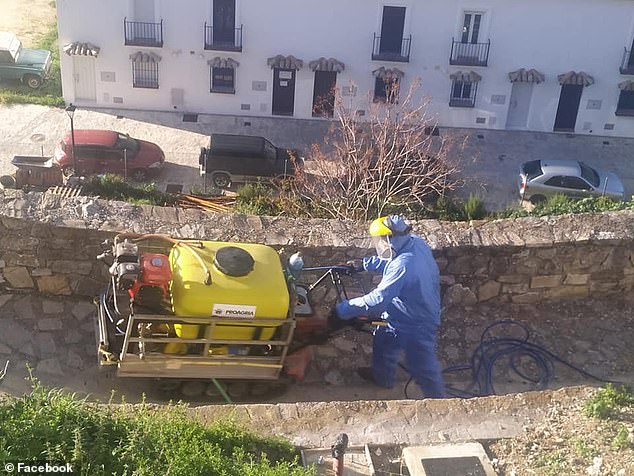 The town’s mayor has introduced intense measures to keep Covid-19 out. Every day 10 people walk the streets with disinfection machines. Another business pays two women to deliver medical supplies and groceries to residents to reduce footfall in the town

Galvan said that every Monday and Thursday at 5.30pm around 10 people disinfect the town, streets, plazas and outside homes of Zahara de la Sierra.

Sanitation measures introduced in the town include disinfection procedures.

The 40-year-old mayor said: ‘There is no car that comes through the checkpoint that’s not disinfected.

‘We have managed to give tranquillity to our neighbours. They know no one unknown can come in.’

One local farmer, Antonio Atienza, drives his tractor through the town and sprays the streets. 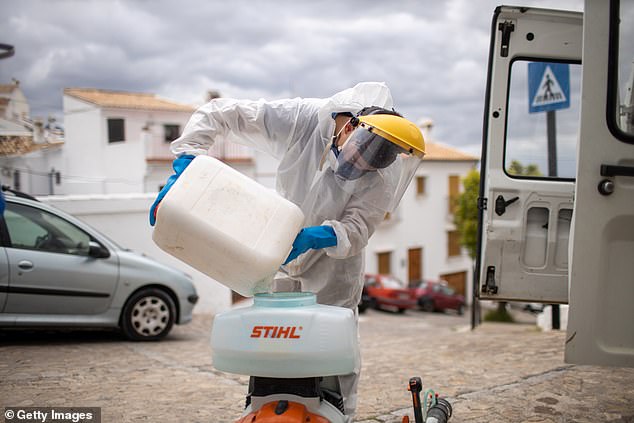 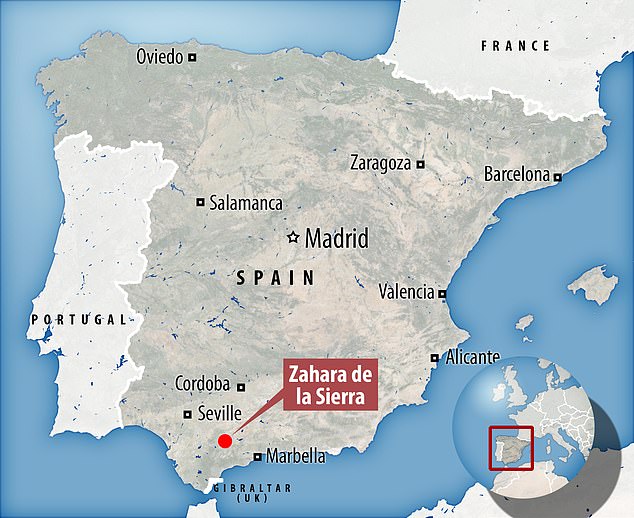 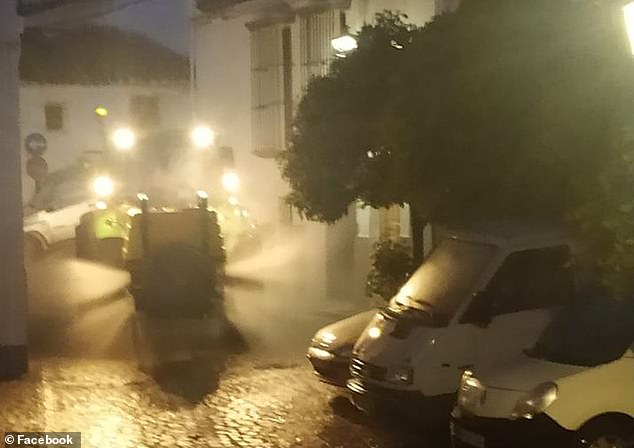 Spain is the country most affected by the coronavirus in Europe after Italy and a state of emergency has been in place since March 14. In a bid to keep spirits high two cars in Zahara de la Sierra have been fitted with music and lights (pictured) to entertain children who watch from their balconies. 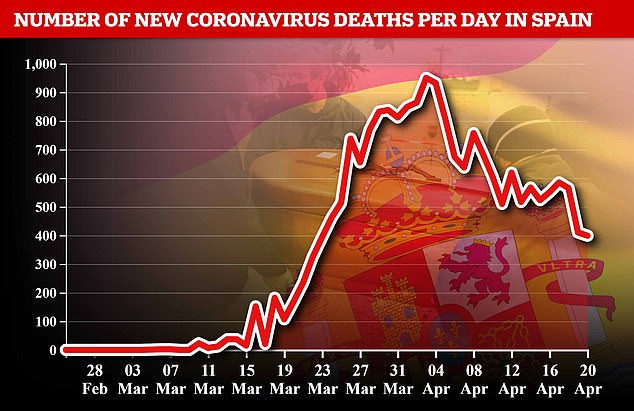 Another local business pays two women to deliver groceries and medical supplies to residents for around 11 hours a day.

One of the women, Auxi Rascon, 48, told CNN: ‘They [the residents] are very happy, because they don’t need to go out, they feel protected and feel confident.

‘They took the right measures at the right moment, and now we are seeing the results.’

The mayor’s drastic action has had the full support of the townspeople, of which nearly a quarter are older than 65.

The Zaharilla women’s association also arranges basic repairs for elderly residents who need help. A Facebook page created for older residents has started a drive to get old photos online.

To keep spirits high, Galvan said that two cars have been fitted with music and lights that children can look at from their balconies. 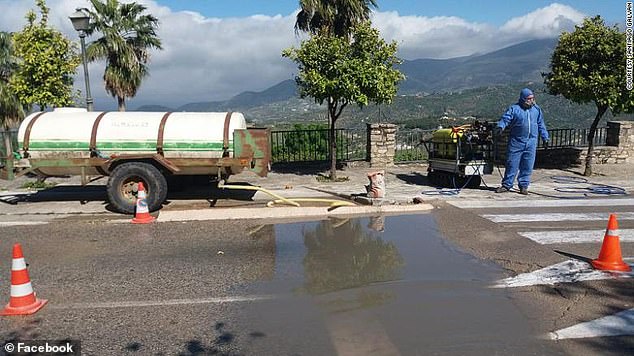 Each vehicle that enters the town’s one remaining access point must drive through a make-shift ditch to ensure their tyres are disinfected. Two men wearing protective clothing wash every vehicle with bleach and water 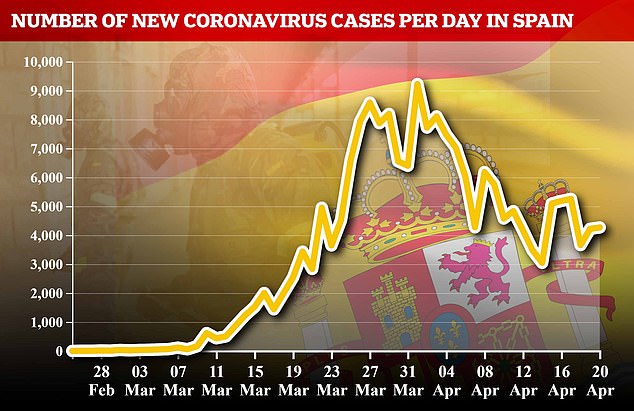 Much of Zahara’s economy is provided by family-run businesses and the self-employed.

Galvan that the town council has dipped into its contingency fund to cover electricity, water and taxes costs for local businesses during the national state of emergency.

He said that ultimately, though, Zahara will need financial support from Madrid or the regional government.

Known for its traditional white-walled houses and cobbled streets

The fortress town is just an hour from Seville and a popular destination for tourists who flock to see its white houses and narrow streets that cling to the steep hillside, complete with medieval fortifications and rolling olive groves.